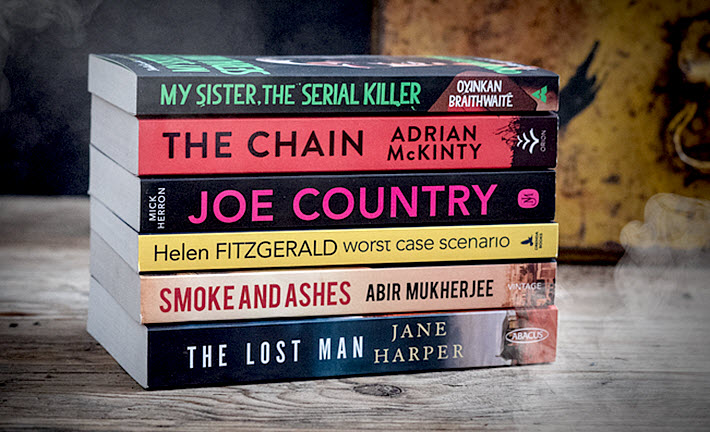 The Theakston Old Peculier Crime Novel of the Year opens public voting on its shortlist, and the Commonwealth Short Story Prize names its international regional winners.

Public Voting Has Opened for the Winner

As the crowded British awards season rolls on, the Theakston Old Peculier Crime Novel of the Year program for crime novels, has announced this week its 2020 shortlist.

This program is operated by Harrogate International Festivals and supported by T&R Theakston Ltd., bookseller WHSmith, and the Express. It welcomes submissions of full-length crime novels published in paperback, for this year’s cycle, between May 1, 2019, and April 30 of this year.

Authors of submitted books must be from the UK or Ireland to qualify for the peculiarly spelled Old Peculier, the name of a Theakston ale.

There’s a public vote involved in the Theakston, once the shortlist is selected by an “academy” that involves representatives of the sponsors as well as the Theakston Old Peculier (not a typo) Crime Writing Festival programming committee and others in the book business.

Voting now is open here, and there seems to be no criterion that consumers voting must be from either the United Kingdom or Ireland, so our fine internationalist readership is welcome to vote with everyone else.

The winner of the 2020 prize is to be announced on July 23, which is the date on which the physical Old Peculier Crime Writing Festival was to open at Harrogate’s Old Swan Hotel.

The winner is to receive £3,000 (US$3,772) and an engraved oak beer cask which is to be hand-carved by coopers of Theakston Brewery, an essential business in our estimation, based in Masham in North Yorkshire since 1827. It is our hope that the winner’s hand-carved beer cask comes with the beer in it.

The July 23 event will be conducted digitally, of course, and as it turns out, it’s part of a series of such events that the Harrogate International Festivals group is staging. That’s a nonprofit charity that produces live events in music, literature, science, philosophy, and psychology.

Taking to the ether for the coronavirus COVID-19 emergency, Harrogate’s program is currently called HIF at Home and has a wide range of programming online. You can get a look at the offers of the moment and details here.

Regional winners of the 2020 Commonwealth Short Story Prize are, from left, Innocent Chizaram Ilo of Nigeria; Kritika Pandey of India; Reyah Martin of the UK; Brian S. Heap of Jamaica, and Andrea E. MacLeod of Australia

Commonwealth Short Story Prize program will announce its overall winner on June 30 and has named its five regional short story competition winners in association with its longtime partner, Granta, which is to publish the winning works.

The winning titles and writers:

The program is in its ninth year, and the Ghanian author Nii Ayikwei Parkes is its jury chair this time. In a prepared statement, Parkes says, “I don’t believe there’s a perfect story. There are great stories, but no perfect stories. What’s amazing is what happens when a story encounters a ready reader or listener—that moment is magic.

“That connection is never the same for any two people or for any two moments and that’s why I love judging competitions. I get to talk about stories with other people who love stories, but it’s completely unpredictable.

“We now have a list of regional winning stories that are striking for their lateral leaps, their use of language, voice, and subversion, and their sheer courage. I look forward to the discussions with my fellow judges to pick an overall winner. I guarantee it will be a story that moves people, but I don’t know which one it will be.”

Speaking for Granta, its digital director Luke Neima says, “The prize gives a platform to places isolated from the traditional infrastructure of publishing, and through it we’ve had the chance to discover a range of brilliant new voices, many of whom go on to find success on bookshelves around the world.”

More from Publishing Perspectives on publishing and literature awards programs is here. More from us on the coronavirus COVID-19 pandemic and its impact on international book publishing is here and at the CORONAVIRUS tab at the top of each page of our site.