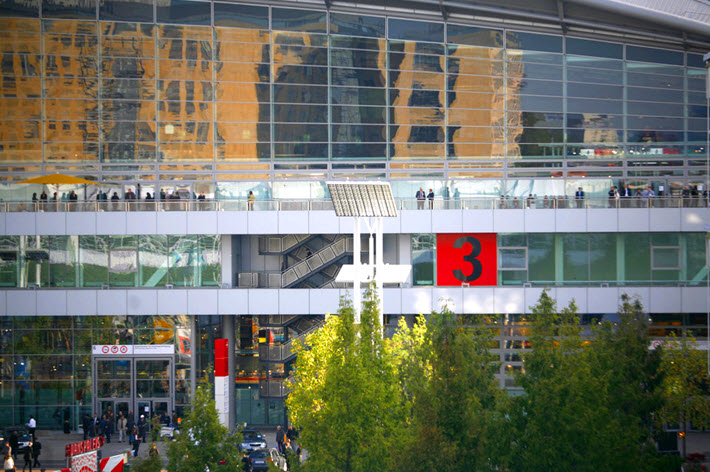 An extension through October of a ban on large public-facing events in Germany does not apply to Frankfurter Buchmesse and other trade events, according to trade-activity officials at AUMA.

Late on Wednesday afternoon, various news media in Germany reported that Berlin would maintain its ban on big public events through October 31.

Today (June 18) however, the country’s association of trade fairs, AUMA, is stressing that this ban applies to public-facing events, not to industry programming.

At issue for Publishing Perspectives readers, of course, is the plan announced at the end of May for Frankfurter Buchmesse to stage not only a digital evocation of the world’s largest annual international book-business trade show but also a physical fair, October 14 to 18.

In a statement issued by Harald Kötter at AUMA, the organization says the new decision to hold large public events off to October 31 “does not apply to trade fairs.”

AUMA says that a May 6 agreement between the federal and state governments in Germany still is in force for professional trade events, permitting such business events to take place starting in September. What’s affected by Wednesday’s extension of the ban on events–as we reported in April when Munich’s Oktoberfest was cancelled for 2020–are “fun fairs,” AUMA says, including street festivals, marksmen gatherings, and other large public-attendance activities.

As was reflected in Deutsche Welle’s coverage on Wednesday, the decision to extend the ban on large public-facing events was reached in a meeting of Germany’s federal government headed by Angela Merkel and the leaders of the country’s 16 states. In the 1659 CEST update (1459 GMT), DW’s rolling coverage reported that “Germany would keep the ban on big public events [through] October, but the federal government has left some leeway to state authorities on the issue,” according to the Bavarian premier, Markus Söder.

The ban on public events, as reported, stands “if standards of hygiene and infection tracing cannot be met,” per Söder’s read-out from the meeting.

Reuters’ coverage confirms this understanding of the decision, and, like many reports on the meeting, led with the news of the ban’s extension, writing, “Merkel and the premiers agreed that large events, where contact tracing and distancing were not possible, should be banned at least until the end of October, a government document showed.”

The reopening of parts of Germany’s economy is largely seen as a success story in Europe’s battle with the coronavirus COVID-19. The first nation to develop testing, the country undertook rigorous shutdown measures for mitigation in mid-March and the population is credited with largely heeding and following guidance. Per Reuters’ data, the country on Wednesday reported 345 new cases and 30 deaths for Tuesday (June 16).

As Bojan Pancevski is reporting at the Wall Street Journal, though, the country has just seen its largest outbreak since it began its staged reopening procedures in early May, “more than 600 employees of a slaughterhouse testing positive for coronavirus this week,” according to authorities.

The meat plant is located in the western state of North-Rhine Westphalia, and Pancevski describes the outbreak as “by far the largest in a string of similar so-called superspreading events at meat-processing plants across the country.”

Outside of this, as the Worldometer tracking system’s graphics of the day indicate, the German progress in lowering and controlling its caseload has been a point of understandable pride, both in daily new cases (see the chart below) and fatalities. 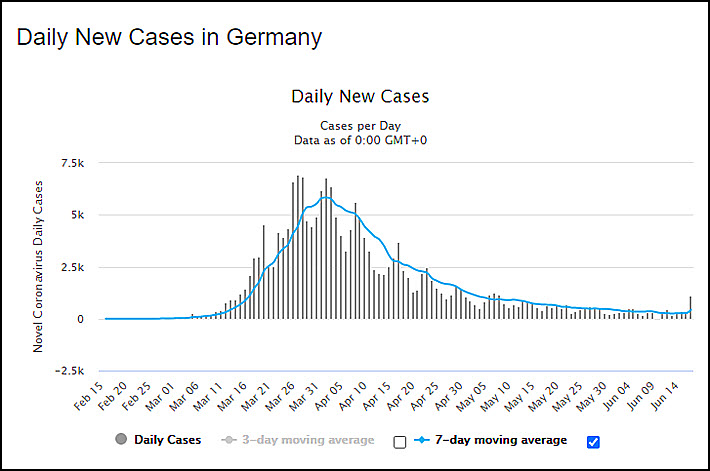