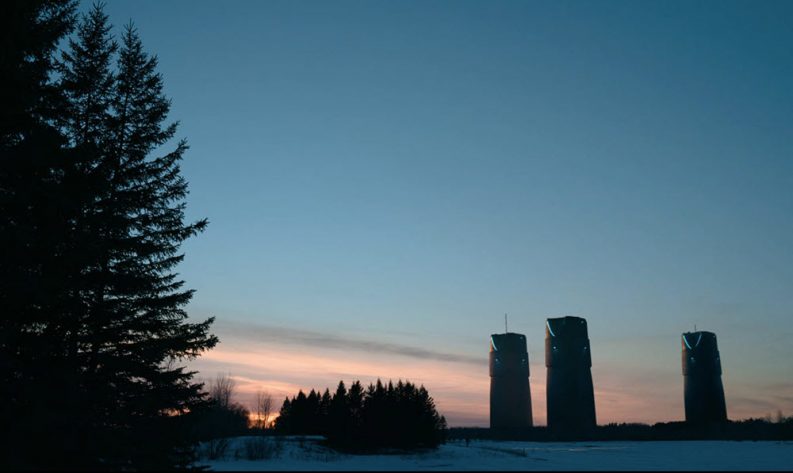 ‘My collective seashell,’ as Simon Stålenhag puts it, ‘sounds like that’—his artwork, his texts, and the new cinematic treatment of his first book created by writer-producer Nathaniel Halpern.

‘I Knew the Words’

Literary fiction readers know this problem well. As soon as they start to recommend to colleagues and friends a new book or television series like Amazon Original’s Tales from the Loop, there’s someone lurking behind a nearby tree yelling “sci-fi!” 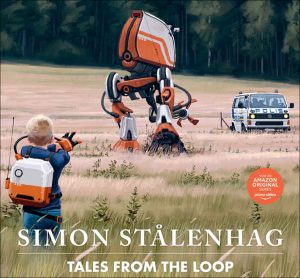 This time it might be the lonely robot in Simon Stålenhag’s Loop: Each time you catch sight of this forlorn, cowering tech-artifact, Philip Glass’ first-ever score for television comes in with the inevitability of Glass’ signature arpeggios.

If you’re not a science fiction fan, then you need to know that Stålenhag’s tales aren’t about the particle accelerator that hums underneath a Swedish town in his books.

In the show that premiered on April 3, shot in Canada, that town has become Mercer, Ohio. And the CERN-like accelerator, “the Loop” that employs the townspeople, is much less important than the embrace you feel in this exploration of relatedness, the need to find one’s place. What’s looping here is lives and their connections with each other. Family, loyalty, isolation amid love. They keep coming back. Like an old robot.

“Maybe there’s an artist out there who could tell these stories with only pictures. But I can’t do this. I needed words.”Simon Stålenhag

“When they started going viral,” Stålenhag says about the images he’d created, “I realized there were so many different interpretations being made from these pictures.”

Gracious and candid in an interview with Publishing Perspectives from his home in rural Sweden, Stålenhag speaks in a strong, searching English. His conversation is a headlong drive to explain quickly: “It’s not their fault,” he says about fans of his work who were misinterpreting the great hulking remnants of technological apparatus on the snowy slopes of his art. “Maybe there’s an artist out there who could tell these stories with only pictures. But I can’t do this. I needed words.

“And I knew the words. And the words, themselves—the art-form of the words—they matter,” he says.

“Words were part of my research. Technical words, jargon from engineering,” words he’s used now to describe an energy out of sight and its impact on a village.

One effect of this is captured by the actor Jonathan Pryce in talking about the show. He’s likened the effect of Tales on Mercer, Ohio–or on the original Mälarö, Sweden–to Thornton Wilder’s Our Town. Interlocking storylines lie under frosted, grassy fields, each townsperson approaching another, then retreating. Nostalgia baked in. The way forward unreliable.

What’s more, words had been part of his life, Stålenhag says, as long as images had—from that boyhood he remembers in his visions, a suburban place of fabulous techno-relics standing as casual backdrop pieces around which kids hunkered and chatted. From his book:

“We walked in long lines through winter nights, and you could see little points of light go on and off in the darkness–cigarettes smoked by teenagers who had gathered around their wrecked memories, like a requiem. We made our nights our days, squinted at the horizon, and sighed. Way over there, the morning dawned.” 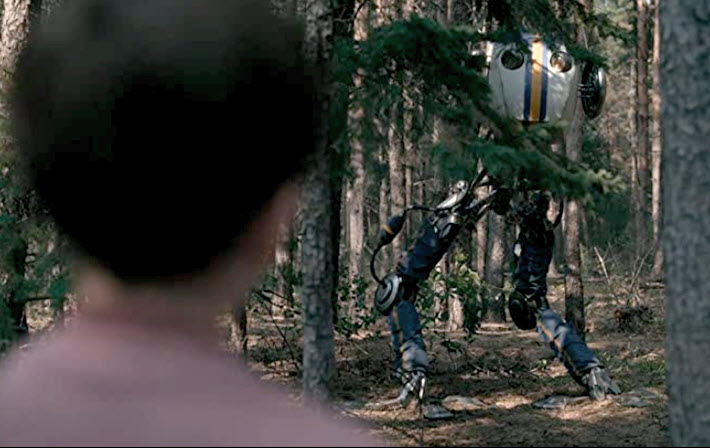 Technology as a backdrop to human fables. The watchful robot in ‘Tales From the Loop’ in the new Amazon Original series based on Simon Stålenhag’s book. Image: Amazon Orignal Series

Happily for Julia Angelin, CEO of Stockholm’s Salomonsson Agency and Stålenhag’s agent, her client turns out to be not only a visual artist of growing impact but also a writer. “It’s really fun to work with someone who’s so diverse in their talents,” she says. 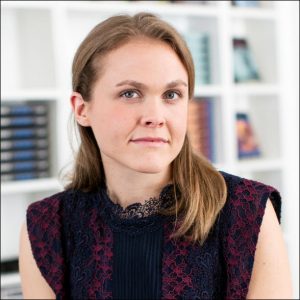 “We’ve had interest from sci-fi imprints as well as literary ones and those specializing in art books. I always push publishers to try to pitch Simon’s books to booksellers so that they end up in both the art and sci-fi sections.

“But I also have friends who read neither genre and yet they adore these books.

“I’ve been contacted by publishers who want Simon to write a full novel, one without illustrations, which feels like a sure sign that he’s mastered both parts.”

‘A Dream in Life’

There’s another way you can assess the value of Stålenhag’s writing: In Nathaniel Halpern’s screenplay. This cinematic interpretation of Stålenhag’s work is the recognition of one writer’s genius by another.

Halpern shapes Stålenhag’s stories and vignettes and images into something O. Henry would understand. There’s a cottony, queasy silence that keeps settling like snow on the work. It’s generated by affections’ ironies, and by time’s darkness.

“I would say this is like a waking dream, to see the sets being built, to see photos of people building things that I’d painted five years before.”Simon Stålenhag

In a well-made video with the show’s creative team (above), you hear directors, actors, and Halpern talk about how out-of-the ordinary the work is.

“I tried to be incredibly faithful to Simon’s artwork,” Halpern says, which is why those who know Stålenhag’s command of his “normal-abnormal” tech-scapes are finding the show so arresting. It works on the screen. Seeing these mysterious relics of the Loop, identical to Stålenhag’s canny creations, is like driving by landmarks you’ve seen in postcards.

“I’m so glad they didn’t try to go down an explanatory path,” Stålenhag’ says.

He had a meeting of the minds with Halpern five years ago when Halpern “pitched it to me.” Halpern, Stålenhag says, has stayed remarkably true to how he promised it could look and be in this production. “Now,” Stålenhag says, sounding almost overwhelmed, “it’s just amazing to see.

“I would say this is like a waking dream, to see these sets being built, to see photos of people building things that I’d painted five years before. And I say it’s like a waking dream because I can’t say it’s a dream-come-true: I never could have dreamt this happening. It’s so unlikely.”

Stålenhag now has seen deeply turned fables spun up from his words in Halpern’s screenplay, eloquent lines for Pryce, Jane Alexander, Daniel Zolghadri, Rebecca Hall, and the gifted young actor Duncan Joiner.  Stålenhag served as a consultant, attached to the show as an executive producer. One of its directors, Jodie Foster (Episode 8), says that the work is “like a film lover’s television show.”

And for Stålenhag, it’s authentic. The show got it right, he says.

“It’s all becoming part of my collective seashell. It sounds like that.” 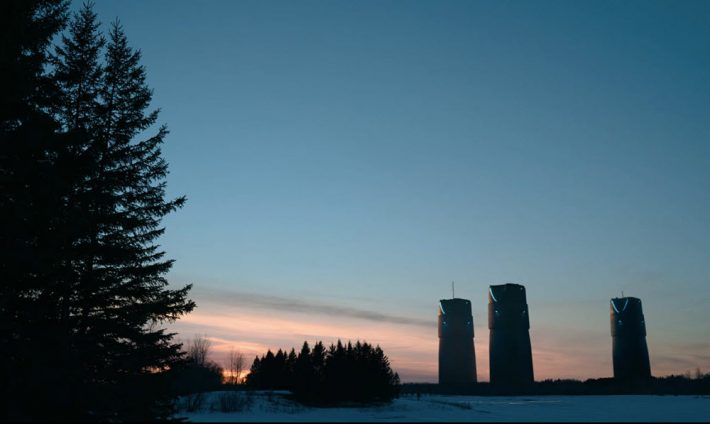 The three iconic cooling towers in ‘Tales From the Loop’ in the new Amazon Original series based on Simon Stålenhag’s book. Image: Amazon Orignal Series

As Publishing Perspectives readers will recall, agent Julia Angelin has had enormous success in rights sales to date, each book going into 15 or more translations, the deals including film, and most of these transactions were closed before the new Amazon Original production was out.

The fact that The Electric State—which Stålenhag says is his favorite—has been sold for a film rather than a series, he says, is right. Loop and Flood fit well into a series’ structure, “that anthology thing,” as he puts it.  The Electric State, on the other hand, “has a beginning, a middle, and an end,” and its story of a road trip to the edge of a continent rocked by cultural upheaval should adapt well as a single film.

‘It Looked Just the Same’ 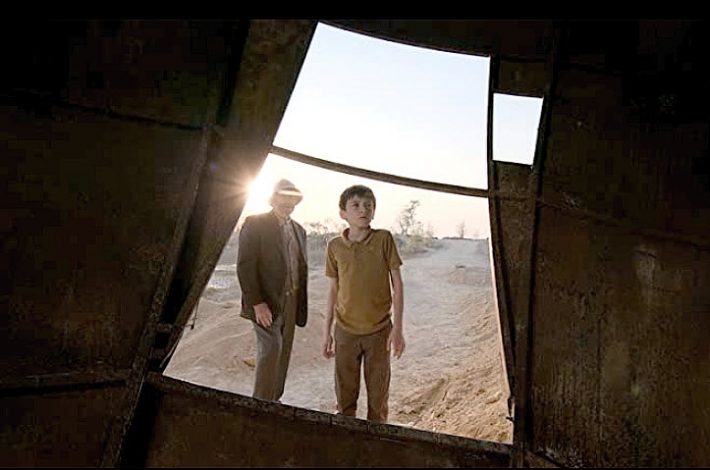 Jonathan Pryce and Duncan Joiner at the Echo Sphere in the Amazon Original adaptation of Simon Stålenhag’s ‘Tales From the Loop.’ Image: Amazon Orignal Series

There’s a fourth book coming, Stålenhag says, again with Stockholm’s Fria Ligan—Free League—as lead publisher. Stålenhag expects it to be out later this year, and he notes that Fria Ligan is far less prone than many major houses to be cowed by the market pressures of the coronavirus COVID-19 pandemic. They’re likely, he says, “to just publish it when it’s ready. We’re aiming for the winter, hopefully for Christmas.

“Today, I’ve been working on final touches for that book,” he says. “I’m going through the text with my editor.” 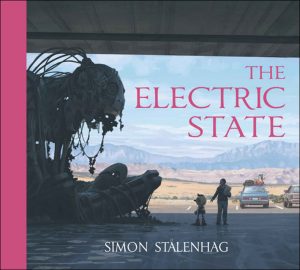 His first new release in three years, The Labyrinth is “what I would say is a domestic horror story,” he says, clearly proud of this new set of words and pictures. “I wanted to make a cosmic horror. So it’s weird extraterrestrial things we don’t understand, but everything is set in a cozy little bunker. There’s a family, two adults and kids. And we learn why the world looks like it does.”

Stålenhag says that unlike many authors, he has had little trouble working through the restrictions of the pandemic. He lives removed from an urban hub in Sweden. And there, an effort to build herd immunity has guided the market to much lighter mitigation efforts than those of many other nations.

He laughs when talking about the new series’ Ohio setting and how it’s captured on the screen. Transferring the original content to a US setting was important both to him and the filmmakers, and the selection of the Canadian locations was critical.

“You know what?” Simon Stålenhag says. “It was so weird going to Canada” for the shoots “because it looks exactly like here in Sweden where I live and grew up.

The series is made by 6th & Idaho Productions and distributed by Prime Video.