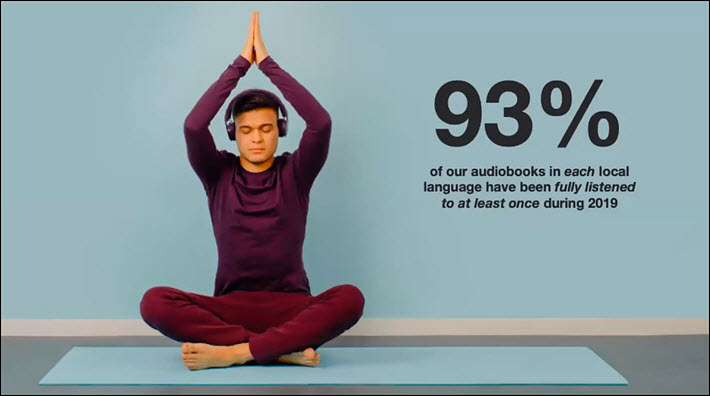 Taking both audiobooks and podcasting together, the Bookwire ‘All About Audio’ program was a multifaceted tour of the issues with a final message to publishers: Streaming is inevitable. 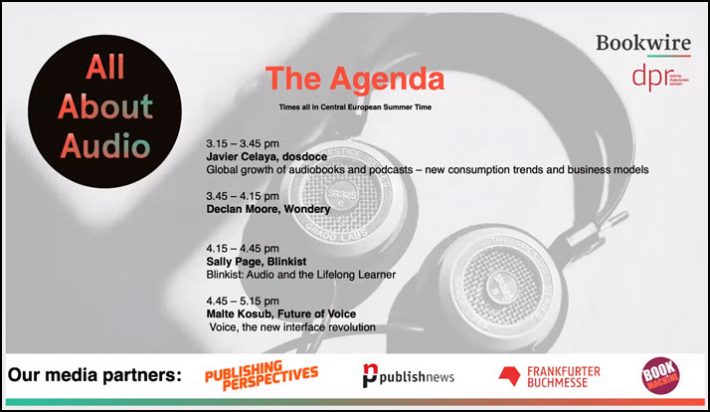 Image: All About Audio, Bookwire and DPR

In its online program Wednesday (June 24) on the state and prospects for audio publishers and other players in the world industry, the mood was upbeat, the presentations ran smoothly, and the audience was offered a lot to think about. 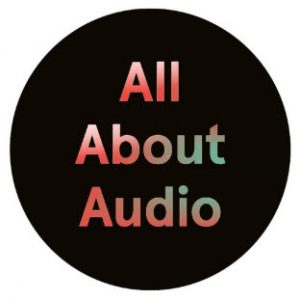 One of the challenges of online presentation—as many in the international book business are learning during the COVID-19 pandemic—is that giving a topic a full treatment presents two options:

The  Bookwire program—hosted by its audio lead, Videl Bar-Kar and presented in association with DPR, Steffen Meier’s Digital Publishing Report—made the most of the all-in-one-sitting approach. Its seven presentations were brisk, the Q&A fast. The program is to be made available to registered attendees, as well, at a later date.

And in any such program, there’s always a combination of mostly-informational and more promotional personalities speaking. This one was notable for a relative and welcome lack of commercial tone. From the subscription issue to the importance of discoverability through search, a strong preference for social languages, and a warning that the sector cannot be ignored, this half-day conference touched on timely, sensible, and actionable points. 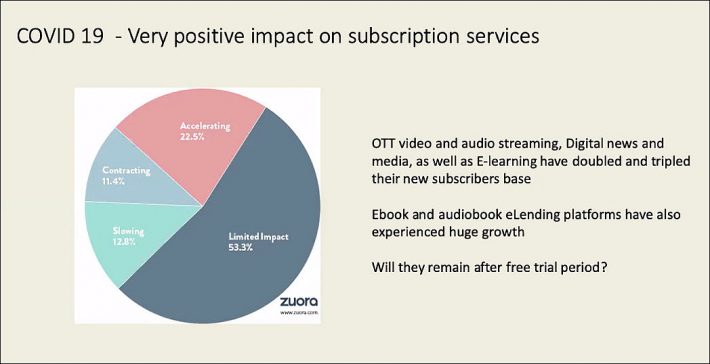 As is frequently the case in these events, the statistical data, which necessarily needs to be programmed first, was probably the most interesting, particularly in a topic like audio, which holds a fond spot in the hopes of many in publishing. As we reported in our advance story, Dosdoce’s Javier Celaya came bearing just the gifts of a glowing future for audio that many enjoy hearing (and understandably so).

In addition to his estimates we’ve already reported—a global audio market growing 25 percent by January 1 and being worth US$25 billion by 2030—Celaya had many key points to bring forward.

For example, his research shows that subscription streaming services are growing more quickly in markets outside the United States than in. Of Netflix’s roughly 200 million subscribers, for example, only some 60 million, he said—about a third—are in the States.

He also brought forward a key point for many publishers to consider in how they think of streaming content consumers: Two-thirds of them, he said, are happy to “stream only,” rather than downloading. This continues a trend, of course, that can be traced back to the Kindle ecosystem and earlier evocations of ebook technology in which the reader-consumer never actually owns a book–she or he is licensing a copy. Ownership has progressively become less important in many markets and there are generational aspects to this as well as the simple fact that so much entertainment of so many kinds today is available.

Celaya’s talk set up the two-pronged approach for the whole program: In essence, for publishing’s interests, all audio is divided into two parts, audiobooks and podcasts. And in a key difference between the podcast-noisy States and the rest of the world, American podcast revenues, he said, tend to be advertising-based while in Europe, paid subscriptions are more frequently the income source. 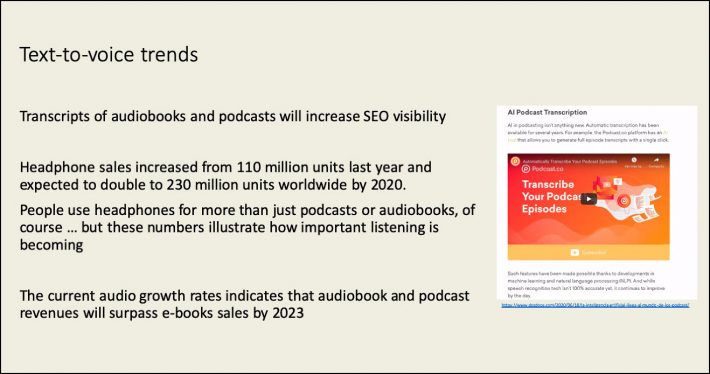 One tricky part of the audio discussion, of course, is always the difference in fast growth and actual market share. On the world stage, it’s especially difficult to get at because the share of audio can vary widely from market to market. But it’s always worth pointing out that even in the States where trends in audio are generally seen as very robust, the sector can still be a small one in the overall market. In the Association of American Publishers’ most recent StatShot report, for April, downloaded (including streaming) audio was at 9.5 percent of the total trade sales by format—as compared to 33.9 percent for hardcover books, 31.4 percent for paperbacks, and 16.9 percent for ebooks.

Podcasting and Other Forms 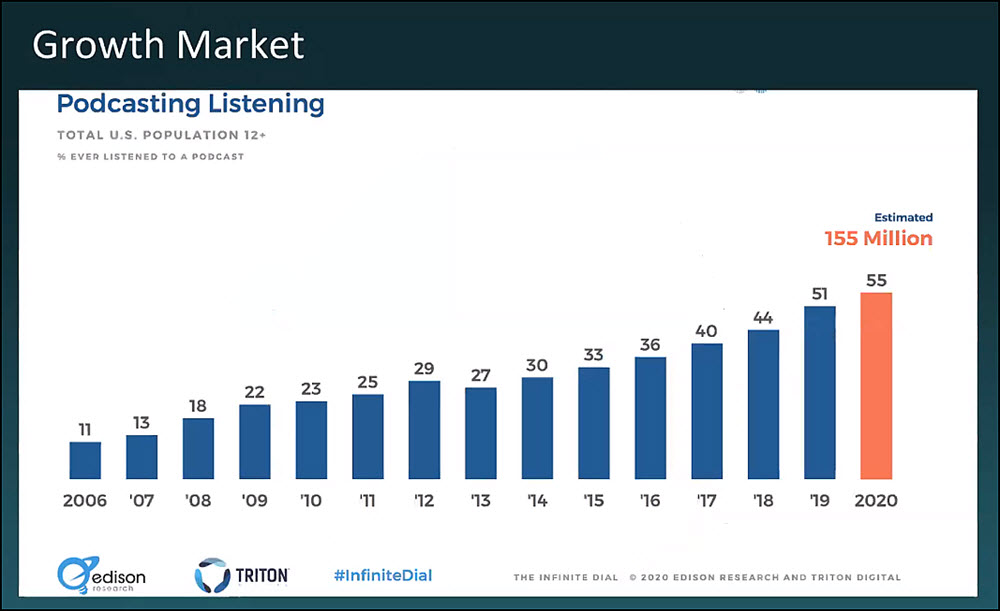 Image: All About Audio, Wondery

From the big US-based podcasting network Wondery—with about 100 million monthly downloads for its shows—Declan Moore talked of how “the overall space has been growing,” with 155 million Americans older than 12 having listened to a podcast in a population of close to 330 million. 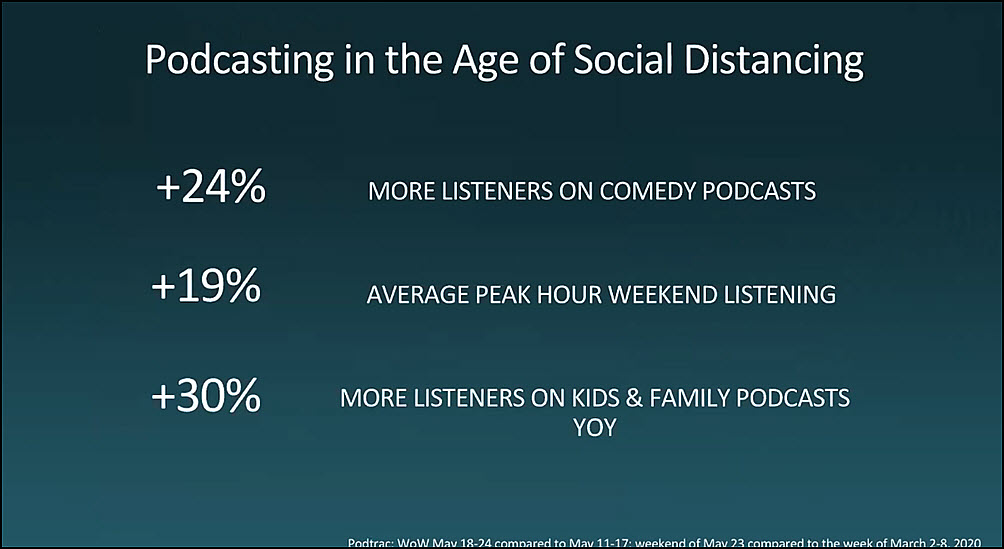 Image: All About Audio, Wondery

Following up on Celaya’s idea of the flattening of the listening curve during the coronavirus emergency, Moore pointed to more storytelling in family content and more weekend listening.

And in terms of publishing’s needs, Moore said he sees audiobooks as “adaptations for the ear” from products created in writing for the eye. He made a useful distinction between this and podcasting content, which is originally created “for the ears,” as a listening product. At Wondery, understands the comparison as meaning a reverse order of content creation: Wondery creates audio content first, while book publishers normally start with a text product.

From Berlin’s Blinkist—which fashions itself as being in “audio and the lifelong learner”—Sally Page explained that the company, based in Berlin, creates quick-listening, “bite-sized consumption” to let users “learn something quickly.” For this company, she said, subscription “really work” not least because consumers see subscribing as a symbol of their commitment to do some learning, a self-improvement play. 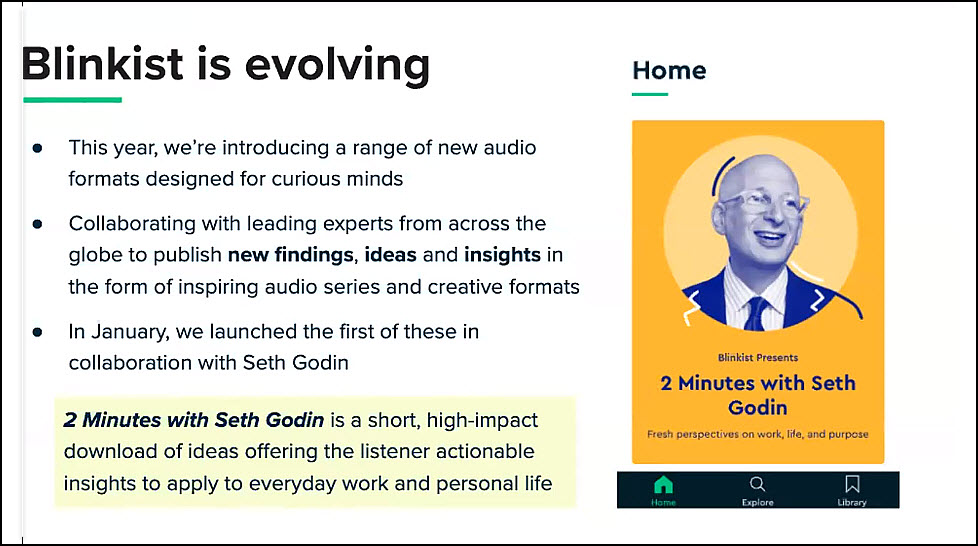 Image: All About Audio, Blinkist

The average time spent in the Blinkist app per session is only 16 minutes in audio, 10 minutes in text, and 70 percent of the user base chooses audio and listening over text and reading. Rather charmingly, Page confessed that the company’s “Two Minutes With” series left her initially skeptical but she says she’s found that something just that enticingly short can be satisfying as a springboard to thought or conversation.

Blinkist’s lengthiest content on the app runs 13 minutes. But the company did in March begin offering audiobooks, as a purveyor for publishers. The audiobooks stand outside the subscription service and are marketed as one-off buys. 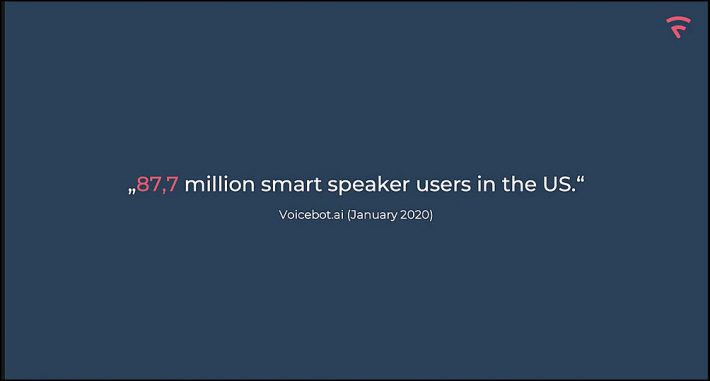 Image: All About Audio, FutureOfVoice.com

Around 2012, said Malte Kosub of Germany’s FutureOfVoice.com, voice-assistant development picked up its pace “because machine learning took over” and speech recognition capabilities improved dramatically to some 95-percent accuracy in 2017.

This, along with a drop in pricing for devices—and a multiplicity of those devices through apps—has combined, he said, with a growing comfort level among consumers in terms of talking and listening to these systems and their devices.

From Storytel, Helena Gufstafsson arrived with a useful map of the 20 markets in which the Stockholm-based subscription audiobook company is operating. adding that in Sweden, audiobooks are reaching as much as 50 percent of publishing’s revenues. That, of course, is a specialized market—the Nordic markets have all been especially receptive to audio adoption—but it’s an enticing benchmark.

The company, she says, is studying how much value it might be for publishers to have such data as “drop-off” input, as in when a customer stops listening to an audiobook. Storytel is also looking into emotional attractions—which seem to correspond to periods of relaxation for users.

And perhaps of highest interest, Gustafsson pointed to the importance of local-language content.

“We’re seeing this in every market,” she said. “People tend to turn to their own language

Image: All About Audio, Storytel

“People want to tell that the service is for them.” she said, in what was easily among the key points made on Wednesday, especially for publishers.

What Storytel is finding is that in internationalized efforts in audiobooks, the assumption that English as the lingua franca may not translate into actual consumption. The publishing world, as it explores just how much more growth room may actually lie in audio, needs to be sure to take into account the consumer’s comfort level with her or his own language. 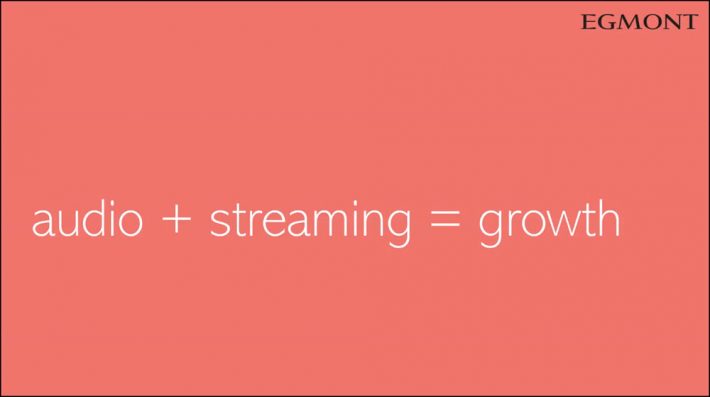 From Copenhagen’s Saga Egmont, Mette Hammerich Caserta was a voice of reality, with concern for those who might think they need not get into audio and other streaming formats: “It’s already in your market.”

And “If you don’t want to sign up with subscription services, they’ll just make their own,” she said. “But I agree that the payout standards aren’t what they should be–and that’s where we should focus. Publishers and authors should be paid for their work, and we should look at this while we still have leverage.”

The points Caserta brought to the day were among the most pivotal and she was gracious enough to be quite candid in sharing them.

To those publishers that she said actually worry her because they’re in some state of resistance in audio development, she said, “I’m afraid it’s just too late for you to try to build a digital department.” Their recourse will be to find vendors and platforms able to handle their content in the audio space for them.

“Streaming is a growth market for you,” she said. “Why? Because the future is about learning how to satisfy your customers’ interests. Your customer wants easy and ‘free.’ If your income is falling, maybe you should start following your readers where they’re going.

“I get it,” she said. “Streaming is selling your books for less. But it is where things are going. You’ll only have influence on prices and other factors if you join early enough that streaming services are dependent on your content.”

Publishing Perspectives is a media partner with Bookwire’s ‘All About Audio’ conference. More from us on audiobooks is here, more on subscription is here, more on Bookwire is here, and more from us on the coronavirus COVID-19 pandemic and its impact on international book publishing is here and at the CORONAVIRUS tab at the top of each page of our site.