Praised by colleagues for her ‘pragmatic approach, creativity and efficiency,’ Frankfurt’s Bärbel Becker goes into retirement.

As long-running stints in a career go, Bärbel Becker’s 38 years and 11 months’ work at Frankfurter Buchmesse is hard to beat.

With Tuesday (June 30) being her last day of almost four decades on the job, our colleagues in Frankfurt were cheering her resilience and that warm, energetic welcoming personality that made her a success as the director of the trade show’s international projects.

As the fair’s protocol chief Iris Klose points out, Becker started in 1981 in a division called Internationales Referat, or international presentation. That part of the fair’s administration developed the International Rights Directors Meeting, eventually called the Frankfurt Rights Meeting, an annual event still going strong more than 30 years later and emblematic of the fact that the rights trade is at the very heart of Frankfurt Book Fair.

One reflection of that: Becker’s involvement in 2016 with the opening of the European Network for Literary Translation, a cooperative of 13 markets’ literature and translation programs.

Bärbel Becker, center, with founding of the European Network for Literary Translation (ENLIT) in the Business Club at the 2016 Frankfurter Buchmesse. Image: FBM

And on a personal level, says Diane Spivey, who in May retired, herself, from 16 years of directing group contracts for Hachette UK, Becker is “always encouraging, adaptable and eager to learn about the various topics that have surfaced in the world of international rights trading, and to put topics across in a way that will appeal both to those starting out in Rights and to those established in their careers looking to discuss new developments around the world.

“Barbel is an internationalist through and through, creating bridges across the world for cooperation, introducing me to some wonderful colleagues from many different countries.”

“It was launched by the late Rosemary Smith, a British translator of German literature, and by literary agent Tanja Howarth. The two of them created quite a buzz among German publishers.”

A Concentration on International Relations

As Klose has pointed out, is where Becker’s focus has been in her work, including her involvement of a newsletter about international book markets, Auslandsinfo. The newsletter, in fact, is the part of Frankfurt’s programming that put the company’s first computers into its workspaces. Over the years, country offices would be established under Becker’s tenure in New York City, New Delhi, Beijing, and Moscow—along with information centers in Warsaw and Bucharest—all operating as part of the fair’s commercial and educational outreach efforts.

In commenting on Becker’s work, Lynette Owen, a rights consultant who formerly was copyright director with Pearson, recalls, “Throughout the time I’ve been involved with the long-running Frankfurt Rights Meeting, as an attendee, a speaker, and as a member of the advisory committee, I’ve enormously enjoyed working with Bärbel in that context—a professional and personal relationship that goes back many years.

“I’ve always appreciated her pragmatic approach as well as her creativity and efficiency in dealing with a wide range of responsibilities. ”

It’s a peculiar turn of events, of course, that in Becker’s closing months of work with Frankfurt, so little of the in-person international work she championed was able to go forward.

For example, at the Abu Dhabi International Book Fair in the United Arab Emirates, hers was the first friendly face most visitors encountered at the German collective stand near the central entrance to the sprawling show.

And when Frankfurt introduced the “German Stories” redesigned stand at the Taipei International Book Exhibition, she outlined the goals of the newly conceived presence: 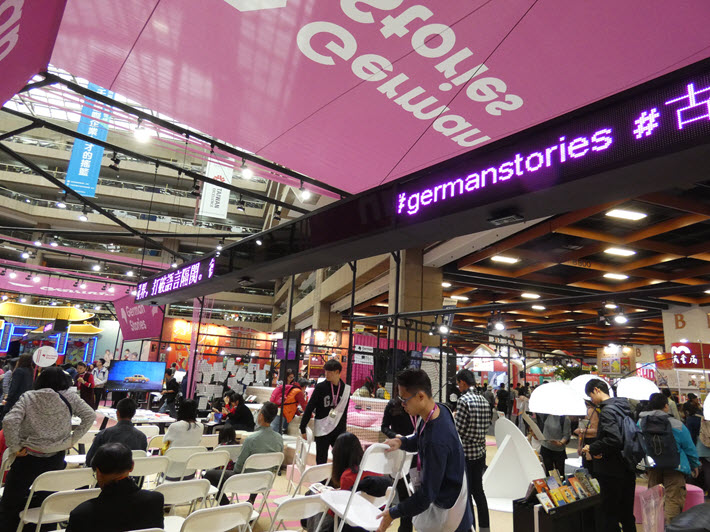 Jittidecharak: ‘She Made Us Feel Frankfurt Is Our Home’

Among well-wishers as she segues from her work, Thailand’s Trasvin Jittidecharak of Silkworm Books has  offered a special commendation, writing, “Frankfurt Book Fair 1985 was my first Frankfurt fair. It was when I first met Bärbel. Then she was working part-time.

“We got along well. She told me that she might be included in the Frankfurt Book Fair workshop on an economic publishing training team going to Bangkok in November 1986 as an administrator.

“I suggested that she should plan to visit Chiang Mai, my home town where I was based, after the course was over, and she did. Fair after fair we met, and occasionally we met up at other book fairs, too. In Frankfurt, I often stayed with her during the fair. We had dinner every time I visited, without fail.

“Bärbel is the kind of friend that you have for life, a good listener, and she’d lend you a hand, professionally and personally, without hesitation. During my early Frankfurt visits, Bärbel gave me and my fellow publishers from developing countries resourceful recommendations and made sure that we got the most out of each visit.

“She made us feel Frankfurt is our home, too. It’s hard to think that she’s retiring. Anyway, her retirement will make me look forward to the next Frankfurt Fair, and then Bärbel will have a more relaxed time to spend with all her friends.“