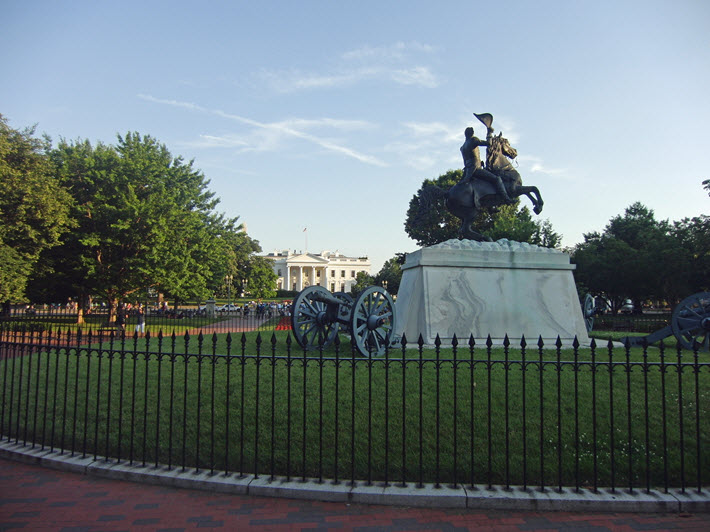 The court action filed this week by Donald Trump’s attorney Charles Harder alleges that Simon & Schuster author Mary Trump is in violation of a nondisclosure agreement.

The White House, with the Andrew Jackson statue in the foreground. This statue in Lafayette Square on June 23 became the target of protesters of Donald Trump’s support for monuments that honor elements of the United States’ discriminatory past. Jackson, from Tennessee, was a slaveholder and signed a law that forcibly moved Native Americans westward in what became called the ‘Trail of Tears.’ Image – iStockphoto: GramirBlues

Simon & Schuster: ‘A Dim View of Prior Restraint’

Update, June 26: As reported by Dan Mangan at CNBC, on Thursday afternoon (June 25), Judge Peter Kelly of the Queens County Surrogate’s Court in New York rejected Donald Trump’s legal effort to stop publication of Mary Trump’s book (the story detailed below). Kelly found “several improprieties with Trump’s brother Robert’s filing and said “the filing was done in connection with a probate proceeding in Surrogate’s Court for the estate of Fred Trump Sr., the late real estatate developer. Kelly did suggest that Robert Trump could tryh to get an injunction against author Mary Trump and Simon & Schuster in New York’s state supreme court.

In a statement from Simon & Schuster provided to Publishing Perspectives, the publisher says, “We are delighted with Judge Kelly’s decision to dismiss this case from the Surrogate’s Court.  We look forward to publishing Mary L. Trump’s Too Much and Never Enough, and are confident we will prevail should there be further efforts to stifle this publication.”

A week ago, in some of our coverage of Donald Trump’s efforts to block John Bolton’s memoir—The Room Where It Happened: A White House Memoir—we also mentioned another Simon & Schuster release set for July 28.

That book is Too Much and Never Enough: How My Family Created the World’s Most Dangerous Man. The author is Mary Trump, Donald Trump’s deceased brother’s daughter—the president’s niece.

In other words, no sooner than one book Donald Trump dislikes goes on sale—Bolton’s new release—his attorneys are attempting to block another. This, despite the fact that every attempt that Trump and his attorneys have made has failed to impede publication during his presidency—all the way back to January 2018 and the attempts to stop Macmillan from publishing Fire and Fury.

As Michael Cader writes at Publishers Lunch, “Once again, the Trumps are using attorney Charles Harder, who failed to block publication of books by Michael Wolff and Omarosa Manigault Newman.”

Haberman reports that the lawsuit filed in Queens County Surrogate’s Court names Mary Trump and Simon & Schuster, “and it seeks to stop publication on the grounds that [Mary] Trump is violating a nondisclosure agreement related to the settlement of the estate of Fred Trump Sr., the father of Donald and Robert Trump and Mary Trump’s grandfather.”

Cader notes that a violation of a confidentiality agreement was also the basis for Harder’s run at Manigault Newman’s book.

The restraining order has been requested by Robert S. Trump, younger brother of the president.

In a statement delivered last evening to the news media, Simon & Schuster says:

“As the plaintiff and his attorney well know, the courts take a dim view of prior restraint, and this attempt to block publication will meet the same fate as those that have gone before.

“In Too Much and Never Enough: How My Family Created the World’s Most Dangerous Man, Mary Trump has written a compelling personal story of worldwide significance, and we look forward to helping her tell her story.”

Now 55, Mary Trump, the daughter of Fred Trump Jr., holds a PhD in clinical psychology. In Simon’s promotional material for the book, we read, “Mary L. Trump has the education, insight, and intimate familiarity needed to reveal what makes Donald, and the rest of her clan, tick. She alone can recount this fascinating, unnerving saga, not just because of her insider’s perspective but also because she is the only Trump willing to tell the truth about one of the world’s most powerful and dysfunctional families.”

What’s driving this summer of attempted Trumpian restraining orders, of course, is the overhang of the US general election ahead on November 3, 131 days from today (June 24).

“Mr. Biden is currently ahead of Mr. Trump by 14 percentage points,” write Alexander Burns, Jonathan Martin, and Matt Stevens, “garnering 50 percent of the vote compared with 36 percent for Mr. Trump. That is among the most dismal showings of Mr. Trump’s presidency, and a sign that he is the clear underdog right now in his fight for a second term.”

Probably the most significant developments in voter sentiments here lie in this descriptive note from Burns, Martin, and Stevens: 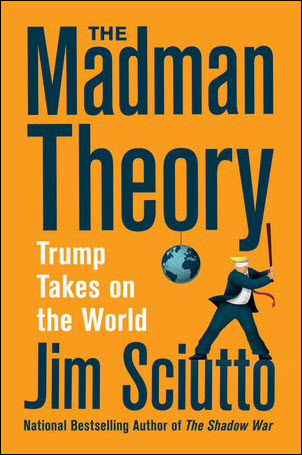 “Mr. Biden leads Mr. Trump by enormous margins with black and Hispanic voters, and women and young people appear on track to choose Mr. Biden by an even wider margin than they favored Hillary Clinton over Mr. Trump in 2016. But the former vice president has also drawn even with Mr. Trump among male voters, whites and people in middle age and older—groups that have typically been the backbones of Republican electoral success, including Mr. Trump’s in 2016.”

It’s to be expected, then, that during the next four months, many administration efforts will be prompted by the attempt to secure a reelection for Donald Trump, and as more critical writings come to market—many timed despite the pandemic to meet the political moment—we can expect to see more tests of the US Constitution’s First Amendment guarantees by the White House.

One such title to watch for: The Madman Theory: Trump Takes on the World is by Jim Sciutto, a former Fulbright Fellow and CNN’s chief national security correspondent, and this one may have particular interest for Publishing Perspectives’ internationalist readership.

That book, from HarperCollins, is scheduled for an August 11 release, is focused specifically on the foreign policy stance of the Trump administration, leading to what the publisher describes as “Trump’s calamitous legacy around the globe, showing how his proclivity for chaos is creating a world which is more unstable, violent, and impoverished than it was before.”

More from us on Donald Trump is here.and more from us on the coronavirus COVID-19 pandemic and its impact on international book publishing is here and at the CORONAVIRUS tab at the top of each page of our site.