As the phrase goes in French, ‘l’union fait la force’—unity creates strength. International-language bookstores in Paris are coming together for mutual support.

Editor’s note: On Monday (June 22), millions of French schoolchildren returned to classes, as France 24 reported, many of them for the first time in three months. Observers are giving the Macron government credit for carefully reopening without triggering spikes. The 5:34 p.m. ET update (2234 GMT June 23) of the Johns Hopkins Coronavirus Resource Center shows France with 197,804 infections, and 29,723 deaths in a population of 67 million. —Porter Anderson

Among Paris’ bookshops are nearly 40 foreign-language bookstores. There’s Greek at the Desmos, Chinese and other Asian content at Le Phénix, and more variety in specialized shops, from Polish to Farsi.

But as world publishing players know, shop owners have been especially hard hit during the recent lockdown measures to mitigate the spread of the coronavirus COVID-19. In France, stay-at-home orders lasted eight weeks. This put international bookstores under extra pressure because of their niche status and the fact that much of their clientele isn’t local. People travel to these shops for books in the languages they want to read.

That said, Corinne Saulneron, who runs the Portuguese-language Librairie Portugaise & Brésilienne, says she was pleased to find that a number of people in her shop’s neighborhood decided to learn Portuguese during the lockdown and ordered books from the shop.

During those weeks of restrictions, Saulneron says she began thinking about how specialized language bookshops could become more visible.

She contacted Miguel Ángel Petrecca, an Argentinian colleague who owns the Spanish-language Librairie Cien Fuegos. Petrecca is also a literary translator from Chinese to Spanish and the founder of a 19-year-old poetry imprint in Buenos Aires called Gog & Magog.

A year ago, Petrecca created a project that produced a printed map, a plan des librairies langues étrangères à Paris, with addresses of Paris’ language-specific bookshops. It was designed to be placed near cash registers in bookstores and distributed by cultural centers and libraries.

“Since I’ve lived in Paris,” says Petrecca, “I’ve noticed how many international bookshops there are. Berlin may be the only other city that can rival Paris, but in Paris the shops are much older.”

Petrecca embraced Saulneron’s idea, which was to create a union of the French capital’s international bookstores.

They began by contacting the same shops that had agreed to collaborate on the map, and so far 20 bookshops have signed on.

“It’s a fragile network,” Petrecca says. “The synergy of being unified will give us strength.”

‘We Love What We Do’ 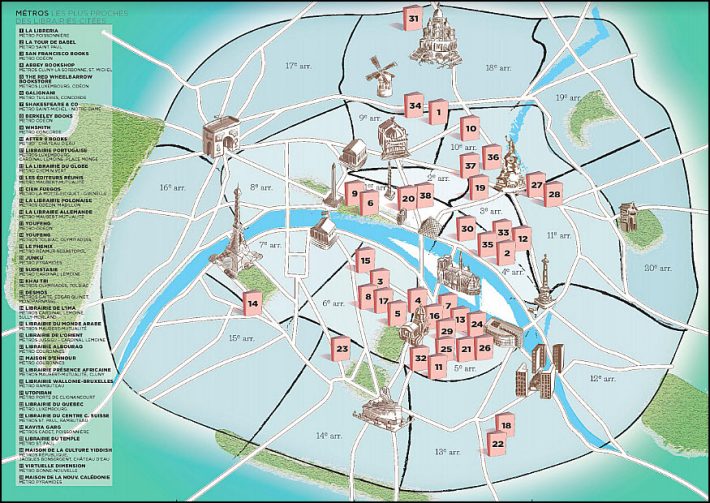 Saulneron and Petrecca took inspiration from the Forum des Instituts Culturels Étrangers à Paris (FICEP), a forum of international cultural centers, which in 2002 published a manifesto in Le Figaro announcing their decision to unite the 55 cultural centers under one umbrella organization. The organization is based in the Irish cultural center and FICEP organizes literary, cinema, and music festivals.

Saulneron says she has trouble getting more than 10 people to come to bookshop events, but she has one that’s packed every time. It’s called Le Babel and it’s a recurring program that brings together international poets, each reading work in the language it’s originally written.

Saulneron admits that people don’t buy books during the event, but she finds that they do return to her shop. “We didn’t choose this line of work to make money,” she says. “We love what we do.”

Most people who buy or sell foreign-language books are interested in world literature, Saulneron says, and a union would mean cultural exchanges and “being able to help each other out.”

Saulneron says she already has received a group request from the Russian-language bookshop Librairie du Globe, which is organizing an exhibition of international artists on the theme before and after lockdown. Each shop can recommend an artist from its linguistic territory.

‘We Need To Know About Each Other’s Shops’ 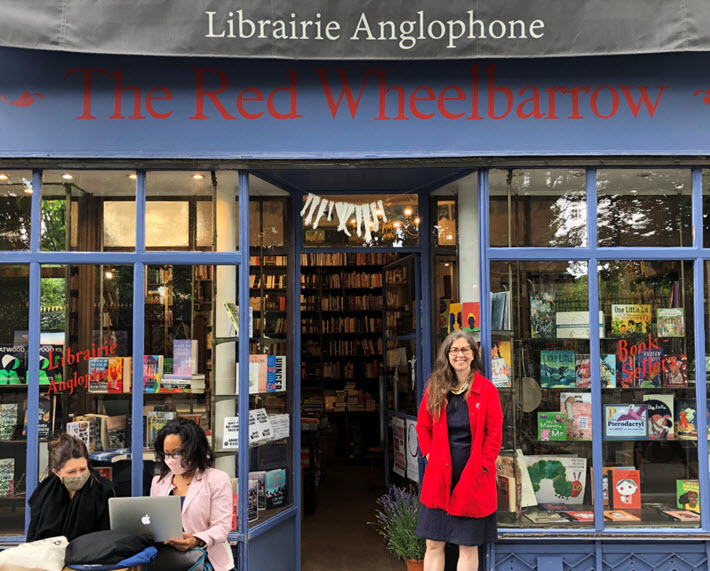 Penelope Fletcher, one of the founders of the English-language bookshop The Red Wheelbarrow, says an alliance is a great idea. Her store contributed to Petrecca’s map project, which is useful because, she says, “People ask us every day where they can buy books in Russian and Spanish.”

Fletcher says she walks by Saulneron’s store near the Pantheon on her way to work. “I love looking in the window, it’s so beautiful. We need to know about other’s shops because booksellers work closely together.

“If I don’t have a book for a client and I know there are three anglophone bookshops nearby, I can tell them to go there. My philosophy is to keep people away from the reflex of ordering on Amazon.”

Petrecca says it’s essential for international shops to widen their consumer bases. Using a network to communicate can benefit everyone, he says. “Talking about literature together, we can inspire each other.” 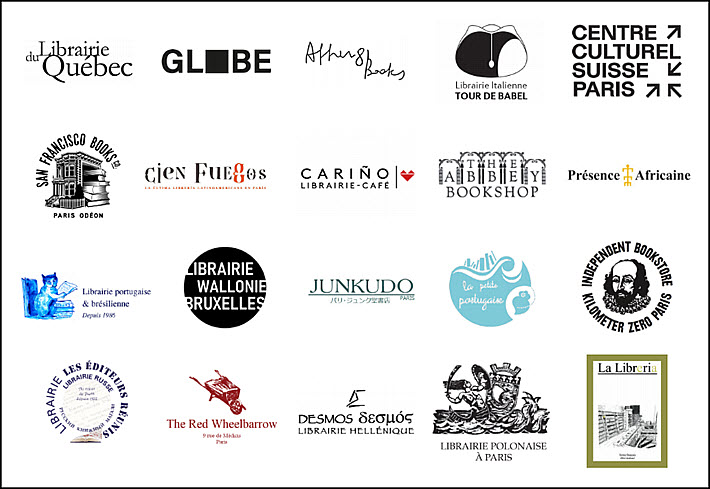 Logos of some of Paris’ international bookshops. Image: From ‘Les librairies étrangeres’

A number of international shops included on the map or in the growing union have rich histories, some going back more than 100 years. They include:

The shop now run by Saulneron, La Librairie Portugaise & Brésilienne, was founded by Michel Chandeigne in 1986. Chandeigne subsequently founded a publishing company in 1992. It specializes in travel literature primarily about Portugal.

According to the German academic Helga Jeanblanc, in the 19th century there were as many as 52 German-language bookshops in Paris. Fifteen years ago, there were six, and sadly, in January, the last of them closed, La Librairie Allemande. German-language titles can be found at the Swiss Cultural Center’s bookshop.

On the bright side, a new shop opened, with a specialization in both Spanish and French. Its owners say that its name, Librairie Cariño, reflects “affection tinged with creativity.”

More from Publishing Perspectives on the French market is here, more on bookstores is here, and more from us on the coronavirus COVID-19 pandemic and its impact on international book publishing is here and at the CORONAVIRUS tab at the top of each page of our site.