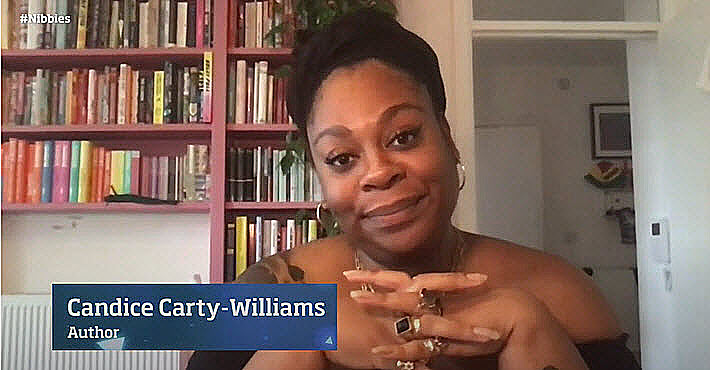 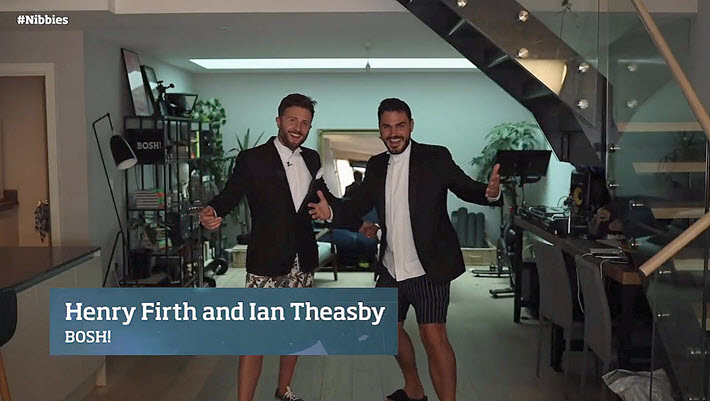 Book of the Year Has Its First Black Winner

Amiably clowning for the camera, “healthy vegan” authors Henry Firth and Ian Teasby set the tone for the British Book Awards‘ online presentation today (June 29). The authors of Bosh! Simple Recipes, Amazing Food, All Plants (HQ) were trouserless in their tuxes as they arrived to announce a couple of industry awards.

As Publishing Perspectives readers know, the Nibbies streamed their first hour of awards focused on the industry—bookshops and publishers–and then a second hour focused on books, their authors, and illustrators.

This was all announced by Nigel Roby (presumably with his tux trousers on), CEO of The Bookseller, which owns and produces the awards. 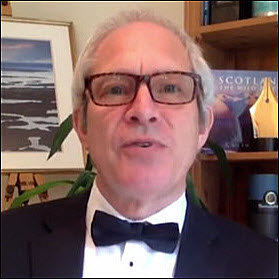 Reminding viewers that the British Book Awards this year are closing their third decade, Roby said, “For a while this afternoon, we can step back from COVID turmoil and celebrate our brilliant writers, bookshops, and publishers.”

He conceded in his comments that “Switching from a Grosvenor House bash”—the annual awards’ usual venue in Mayfair—”to a virtual event has been a huge challenge. We couldn’t have done it without your support,” he said, referring to a broad base of sponsors and partners.

They also couldn’t have done it without a lot of editing.

The video in both hours was fast moving, expertly jumping from slides for shortlists, to presenters, and acceptance speeches–with applause tracks much like those of mid-century sitcoms.

The British industry has for years been making stylish, jazzy videos about its work and events, and its bar for such presentations is quite high. This effort met every criterion for this kind of program and incorporated a huge amount of raw video, not least because the Nibbies are a big program with many categories, shortlists, presenters, and winners to be given their moments.

The YouTube stream logged more than 2,100 views for each of the hours by evening’s end, and of course the program was racking up views on other platforms, as well. 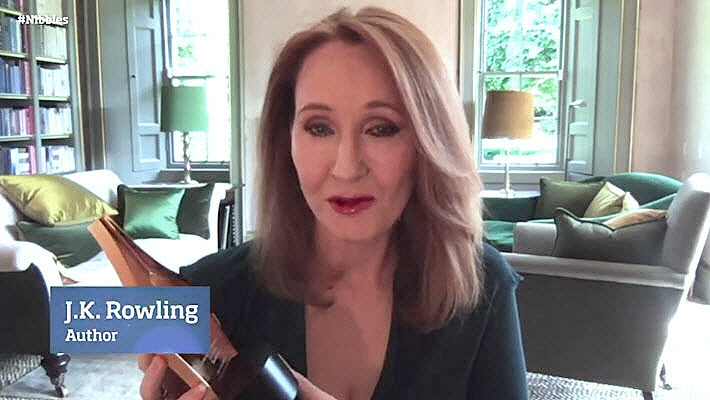 Except for illustrator Axel Scheffler, who won with his longtime co-creator Julia Donaldson, the program’s entire slate of authorial honors has gone to women this year.

In accepting the special “30 from 30” honor for the 30th anniversary of the British Book Awards–for Harry Potter and the Philosopher’s Stone (Bloomsbury)–JK Rowling said, “It’s particularly meaningful because the first award Harry ever won was a Nibbie.”

She was followed in the digital presentation by Bloomsbury CEO Nigel Newton, who thanked not only Rowling but also “booksellers, illustrators, librarians, teachers, printers, and distributors. They were terribly important in the huge logistical phenomenon that was Harry Potter.” 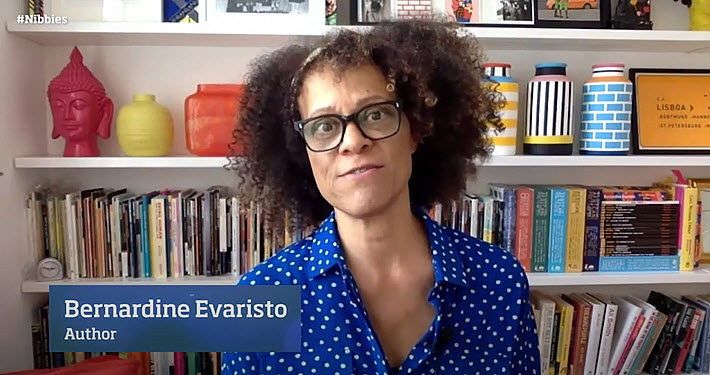 Another familiar face in the lineup of winners is that of Bernardine Evaristo, whose Girl, Woman, Other  (Penguin Random House / Hamish Hamilton) has also won the Booker Prize (with Margaret Atwood for The Testaments) and has been shortlisted for the Women’s Prize for Fiction.

Today, she has won the British Book Awards’ fiction prize.

Evaristo also won Author of the Year in today’s honors.

Candice Carty-Williams accepts the Overall Book of the Year Nibbie (as well as the Debut prize) for ‘Queenie’ from Orion Books’ Trapeze imprint: ‘I guess I’d like to be prouder of the publishing industry,’ she said, pointing out that the program had not honored a black writer with this level of honor in 30 years until today. Image: British Book Awards

“And I’m proud of myself, obviously, but I guess I’d like to be prouder of the publishing industry.”

Adding, “There’s a lot more work to be done and a lot more change and a lot more activism” ahead, Carty-Williams went on to say to the camera: “The last words in Queenie I wrote were ‘black lives matter.’ And it’s important for me to say that because I’m really proud of who I am and really proud of where I’ve come from. And against all the odds, I’ve managed to get to this place. I just hope that more people like me get to do that.” 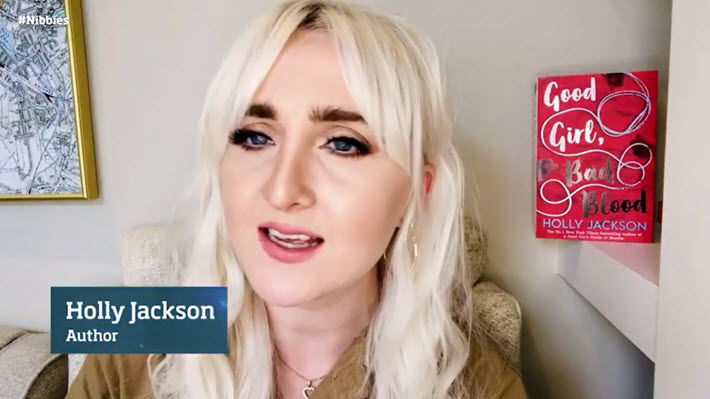 Author Holly Jackson, winner of the Children’s Fiction British Book Award for ‘A Good Girl’s Guide to Murder,’ thanks her parents ‘because you’re supposed to,’ in a boisterous acceptance speech on the digital Nibbies presentation: Image: British Book Awards 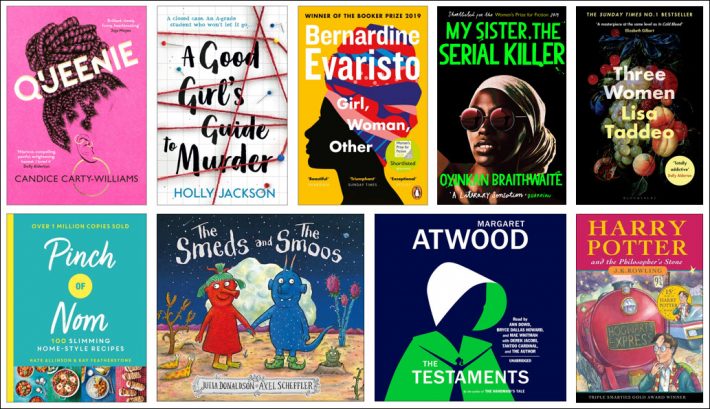 The Bookseller’s books editor Alice O’Keefe, commenting on the Carty-Williams win, said, ““Our Book of the Year needs to be something quite special and Queenie stood out from the very beginning.

“In her debut, Candice Carty-Williams introduces readers to a vibrant, fresh, unforgettable black heroine grappling with life, love, race, and family in contemporary London. By turns funny, wise, and heartbreaking, this is an exceptional first novel.

“Trapeze’s publishing strategy was also a masterclass in how to launch an author; from the now iconic jacket to the unmissable marketing and publicity campaigns that got everyone talking, and propelled Queenie into the bestseller lists.” 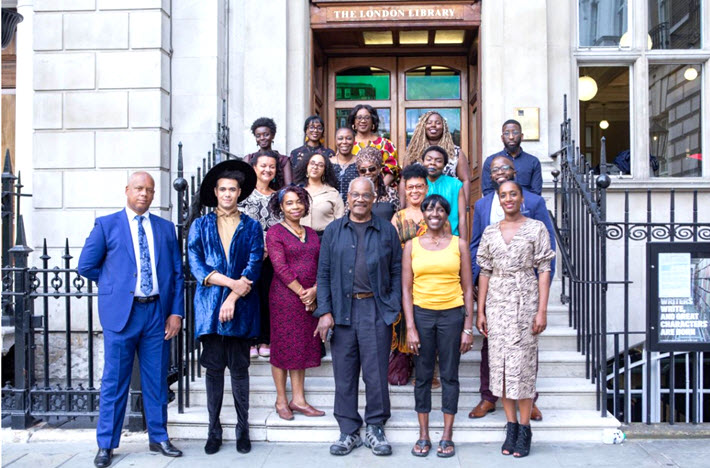 The London-based literary house Jacaranda Books has won the 2020 British Book Awards’ Small Press of the Year honor. Here, authors who have books coming out this year in the company’s ‘TwentyIn2020’ program are gathered at the London Library. Image: Jacaranda, Abi Oshodi

In a comment on the win by Jacaranda Books for Small Press of the Year, The Bookseller editor Philip Jones says, “This has been a pivotal time for small presses, and this was reflected in the regional winners that made up this shortlist. But one press rose above the others in 2019, with an agenda-setting approach to its publishing that was loud and proud, and I was delighted that Jacaranda and Valerie [Brandes, founder and publisher] emerged as the winner at this important moment for diverse voices.

“This is a small press with big ideas and one that is going places.” 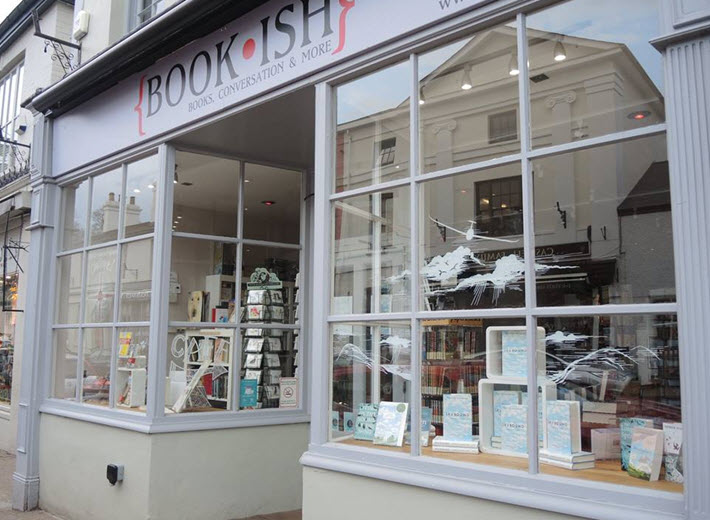 Highlights videos from the two parts of today’s awards show can be found on this page.

More on the British Book Awards is here. More from us on publishing and book awards in general is here. And more on the coronavirus COVID-19 pandemic and its impact on international book publishing is here and at the CORONAVIRUS tab at the top of each page of our site.