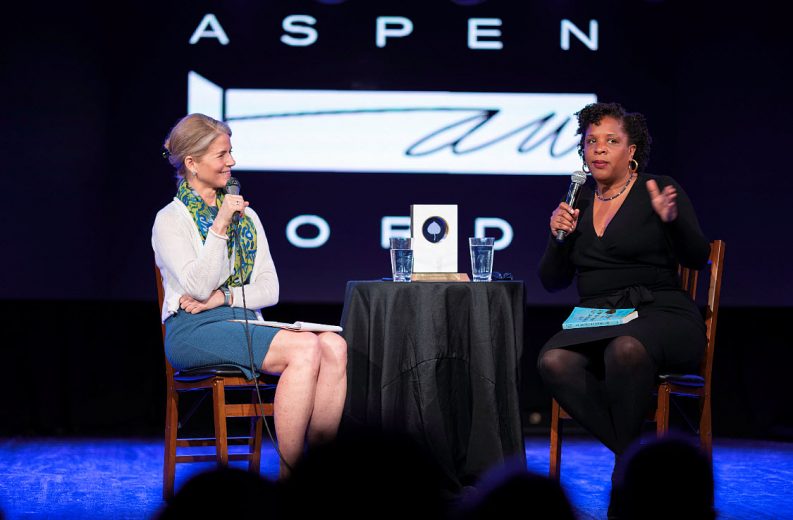 Adrienne Brodeur, author and director of the Aspen Words Literary Prize—opening today for submissions in its 2021 cycle—is looking for issue-driven literature that has ‘the power to change you.’ 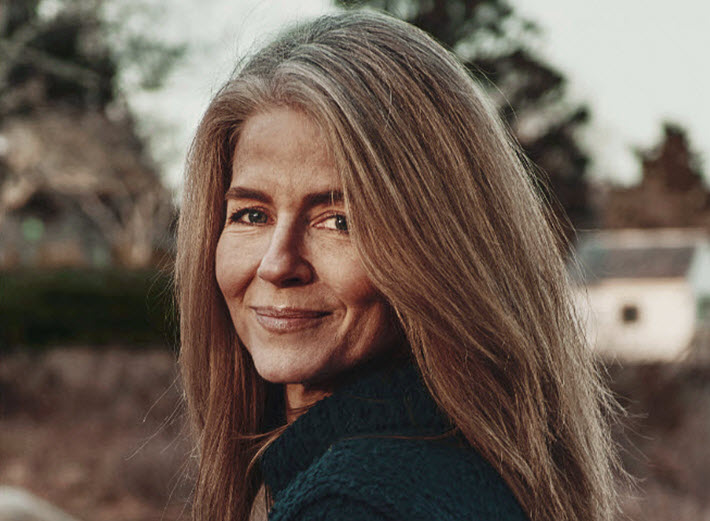 ‘Shining a Spotlight on a Social Issue’

But what gives the program much of its market visibility in the business—and growing attention on the American literary scene—is its still-young award program.

The year, as the prize program’s director Adrienne Brodeur says, “has already brought multiple crises, with a pandemic and further demonstrations of systemic racial injustices in our society. Such incidents, ongoing and interconnected, underscore the need for literature that magnifies society’s essential flaws, takes into account important lessons from the past and creates hope for a better future.

The Aspen Words Literary Prize today (June 10) opens its electronic submission process for its 2021 award cycle, and the deadline for entries is August 3. This is a prize for which submissions can be made only by publishers, and an application form is here, with eligibility details and guidelines here.

With a US$35,000 purse, the prize is one of the richest in American fiction, and one of its distinguishing characteristics is the criterion for entry that a work should be “an influential work of fiction that illuminates a vital contemporary issue and demonstrates the transformative power of literature on thought and culture.”

Brodeur says today in a jury announcement, “We’re looking for fiction that will lead to shifts in consciousness, word by word, sentence by sentence, and story by story. We look forward to celebrating many worthy books from 2020 in this fourth cycle of the prize.”

In short, this is issue-driven literature. And in an entertainment-laden era, the point bears some specific explanation:

“A work of fiction that illuminates an issue such as this will use the power of storytelling to engage readers with a societal problem that may or may not affect them directly. Contemporary issues that might be addressed include, but are not limited to: socioeconomic inequality, environmental degradation, immigration, racial inequality, violence and war, gender inequality, mental illness, and political identity.

“Though the piece of fiction does not have to be set in contemporary times, it should provide historical context that helps to increase understanding of current social issues. The work may confront these issues blatantly, or in a subtler manner.

“It is up to the discretion of the AWLP Selection Committee and Jury to determine which works of fiction are most effective in achieving the stated goals of the prize.”

The 2021 award cycle will mark just the fourth year of this still-young program, and its longlist is expected in November, a shortlist in February, and a winner’s announcement in April at an event normally held at the Morgan Library in New York City unless public health conditions intervene as they did this year.

And today, the 2021 jury has been announced to comprise:

‘To Understand Diversity of Every Sort’

Publishing Perspectives has had a chance to speak with the author Adrienne Brodeur, who is the director of the Aspen Institute’s Aspen Words Literary Prize.

Based in Cambridge, Massachusetts, Brodeur has drawn critical acclaim, herself, for her memoir Wild Game: My Mother, Her Lover, and Me (Houghton Mifflin Harcourt, October 2019), which was named a Best Book of 2019 by NPR.

A story of being relied upon as a child to help enable an affair for her mother with her husband’s closest friend, the gravity of Wild Game is equal to that of the kind of fiction the Aspen Words Literary Prize honors. The paperback edition of the book is set for a July 7 release.

We were interested in knowing how—in a culture that often seems fixated on “happy stories” and “feel good” entertainment, the Aspen program has been able to carve out such a steadfast spot on the scene for serious literature and issue-driven authenticity.

“I’m such a believer in the power of literature and literary stories as a method for creating empathy and a way to be transported, so that someone like me or someone like you can suddenly be in a war zone or in the rural South or in other worlds we might not otherwise occupy.

“But I do think books have become much more important for us understand diversity of every sort.”

In fact—and our interview took place before Monday’s #PubWorkers4BlackLives protest—”I do feel hopeful,” Brodeur says, “that publishing is actually addressing more of these stories. I feel like there are more and more diverse voices in the world, they seem to be amplified now. 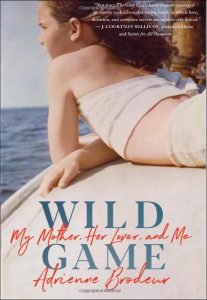 “I hope it’s all happening.”

Brodeur says that she does see plenty of support, of course, for “‘the fluffier and the lighter, the better’ work, but I think people care about these issues and want to understand and there’s a way in which literature can shed light that I don’t think the newspapers and the nonfiction necessarily always do.

“But in terms of the history of the prize, when I first came on to Aspen Words and got to know both Aspen Words and our parent organization, the Aspen Institute, it seemed like the institute was doing such important work with regard to public policy and the type of social issues that I was interested in reading about.

“I thought, such a prize as this—an award for fiction that shines a spotlight on a social issue, examines it, and brings it into the public discourse—it just made so much sense as one of the programs of the Aspen Institute.

“And when I proposed this, the institute was very supportive and then when we found a donor who remains anonymous to support the prize in perpetuity—I mean it’s just a wonderful. NPR is our media partner.

“We’re only three years old,” Brodeur says, “and when you create anything, there’s a lot to learn a lot to figure out, but it’s been a wonderful process and we’ve read some incredible books.”

And asked if the darkening exploration of a mother’s infidelity and its impact on Brodeur has, in some way, a relationship to the candid and often canny reckonings found in the books longlisted, shortlisted, and awarded by the Aspen Words Literary Prize, the author-director of the program is thoughtful.

“You know,” she says, “there’s not a conscious direct link there.

“This woman at the bookstore–Molina’s her name–she was Margo in the book, and she was the person who really ignited that passion in me.”Adrienne Brodeur, Aspen Words Literary Prize

“What there is, is a connection of understanding about literature’s power to change you. The story that’s in my book and the process that I had to go through when my life became derailed and I went down a path that possibly wasn’t the best path for me to go down.

“But there were three things that saved me–and this is all after the secret came out so I was able to speak about it. Friendship and therapy, yes, but the big one was a sudden access to and appreciation of literature, which was found through the woman who was my stepmother at the time who owned a beautiful literary bookstore, a beautiful independent bookstore in Del Mar, California, and started, essentially, handing me novels and memoirs and other books.

“I came from a fairly literary background–my father was a New Yorker writer [Paul Brodeur], my mother was a food and travel writer.  So it wasn’t that I wasn’t a reader, but I also wasn’t the kid who was under the blanket with a flashlight every day of my childhood.

“This woman at the bookstore–Molina’s her name–she was Margo in the book, and she was the person who really ignited that passion in me. I can still remember, you know, the books that were in those early piles when I’d go over and have dinner on Mondays 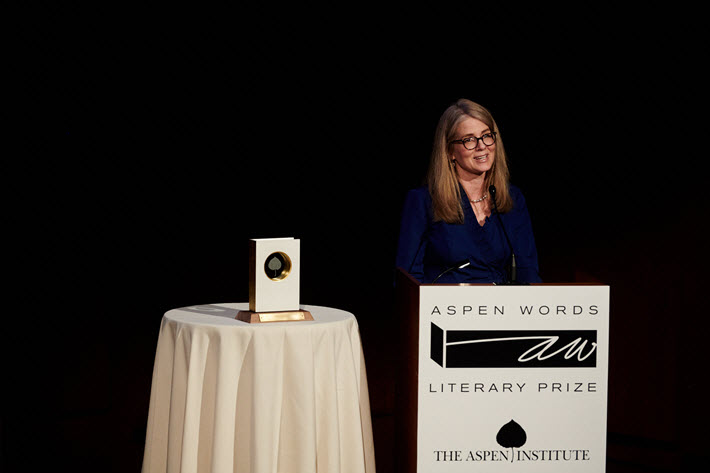 As so many publishing-related programs make the flight to digital, the Aspen Summer Words program is no exception.

During the pandemic, these sessions from the Aspen program are free of charge but anyone who can afford to make a donation is encouraged to, and registration is necessary.