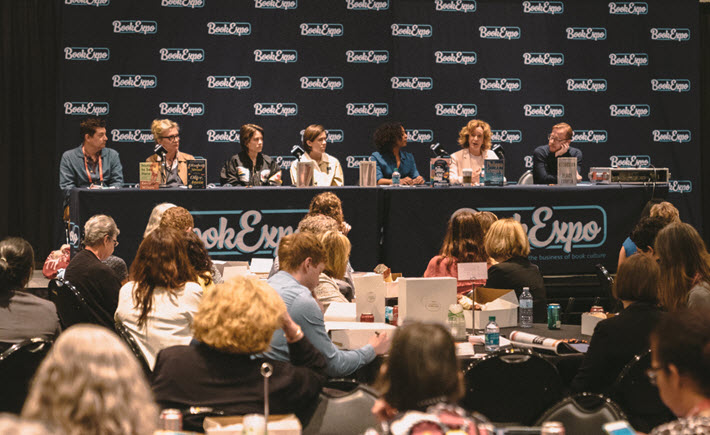 BookExpo 2020 opens its digital events, which are available free of charge to the public. The weekend will feature programming in a digital edition of the fan-driven event, BookCon.

A panel session at BookExpo in its usual physical rendition at the Jacob Javits Center in New York City. Image: ReedPop

As Publishing Perspectives readers know, BookExpo has become the season’s next major trade show event to produce an online evocation of itself.

Running today (May 26) through Friday, these main show events are free and open to public viewing, something not the norm for the physical show that normally is set at New York City’s Jacob Javits Center. The fan-driven BookCon event, renamed BookConline, takes over on Saturday and Sunday, mirroring its normal public-facing weekend iteration after the industry show plays through.

Most of the key internationally positioned trade shows and book fairs in the publishing industry are now working to create digital contexts for themselves. The first to make an ambitious move in this direction, as we’ve reported, was Bologna Children’s Book Fair, the 30,000-attendee annual specialized trade show, and it drew some 60,000 unique users, according to organizers, 75 percent of them from outside Italy.

How successful other programs may be, however, will depend on several things, not least of them “webinar fatigue.” Yes, it’s a thing now, being discussed in media circles because of the plethora of just such efforts as these. It’s of course completely understandable that normally robust business events must try to develop editions of their work in the digital space during the coronavirus COVID-19 pandemic.

But with so much of daily business being conducted this way—and so many demands on professionals’ time from the deepening roster of such programs—what’s needed is a fit-to-purpose development for specialized digital events, a terrific challenge for some talented developers, if someone would like to seed a bit of a challenge project.

To view BookExpo’s events from ReedPop, see the company’s Facebook page here. The week’s schedule of events is here.

And there’s one great thing we can say for digitally reinterpreted publishing trade show events: So far, they have not booked sessions on top of each other, as organizers of the physical shows do with such furious pleasure. You actually can see every single thing from BookExpo if you would like to and without overtaxing your pedometer with treks from one end of the Javits to the other. In a pandemic, you take your bright spots where you can find them.

For the record, in New York City, in which this trade show would have been held this week, The New York Times‘ coronavirus case count database reports at least 20,740 deaths as of the 5:24 a.m. ET update (0924 GMT). The case count has reached at least 203,569, and the incidence of new cases, hospitalizations, and deaths is slowing after a pitched two-month battle at the epicenter of the American outbreak.

The United States’ fatality numbers are about to cross a newly devastating psychological line, with 98,223 confirmed so far and the 100,000-death mark looming, according to the Johns Hopkins Coronavirus Resource Center  in its 4:32 a.m. ET update (0832 GMT).

The Worldometers metrics, a source used by Johns Hopkins, traditionally runs ahead and shows at this hour an even closer proximity to the 100,000 mark, its American death toll already standing at 99,807.

Today’s programming has an emphasis on libraries.

1 p.m. ET (1700 GMT): Pivoting Through Crisis: A Global Pandemic’s Impact on the Future of Library Services 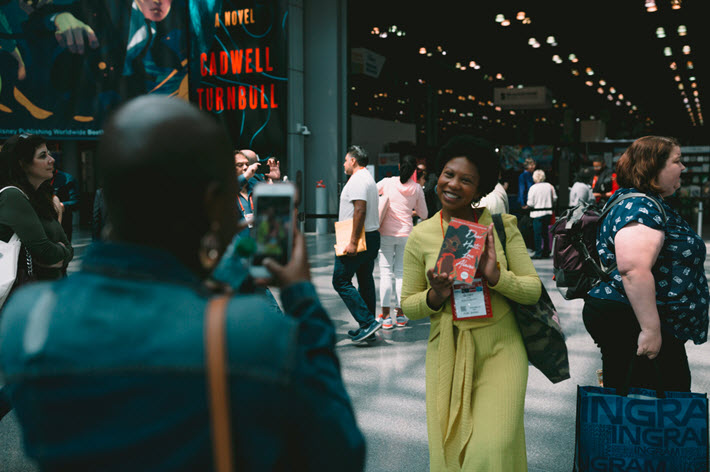 At BookExpo, the Javits Center, in an earlier rendition. Image: ReedPop

More from Publishing Perspectives on BookExpo is here, and more from us on the coronavirus COVID-19 pandemic and its impact on international book publishing is here and at the CORONAVIRUS tab at the top of each page of our site.