Having raised close to £200,000 (US$246,885) in online and offline fundraising efforts, the Hay Festival today is announcing its digital edition programming, almost 14 days long.

Image: Fom a promotional video produced by the Hay Festival for its upcoming digital programming

Having had to cancel its usual flagship event in Wales at Hay-on-Wye—originally scheduled for May 21 to 31—the Hay Festival went to work to raise £150,000 (US$185,791) to stay solvent. After all, a nonprofit that depends on ticket sales for its revenue is in trouble when it can’t sell tickets. By late March, the program had raised £79,104 (US$97,970), proving that it had extensive backing.

“This along with sponsor support,” a spokesman says, “puts us in a good position to deliver this year’s festival digitally and plan confidently for our Winter Weekend in November and Hay Festival 2021.”

When asked about funding, however, organizers are quick to add in their response to us, “Hay Festival has always relied on a diverse funding base of ticket sales, sponsorship and public donations, and as we enter this next global recession, it won’t get any easier to put festivals like ours together. So, our fundraising and sponsorship drive continues as we map a sustainable path forward well into the future.”

This is an important point. Nonprofit festival and fair activity will be impacted by the doubly dire weight of both the medical and economic crisis as everything and everyone else. Donations, in short, will be gratefully received.

At this writing, the Johns Hopkins Coronavirus Resource Center reports that the UK has, as expected, surpassed the Italian death toll in the emergency, now showing 196,243 cases and 29,501 deaths. The British caseload ranks it today as the fourth largest in the world.

And so it is that even as Bologna Children’s Book Fair continues its digital evocation of the huge publishing industry trade show in Italy this week, we see today (May 6) the first major international public-facing festival event of its kind announce its programming for an online iteration.

Hay Festival Digital runs May 18 to 31—even longer than the in-person event was planned to run—and has retooled its site to boast of “free live broadcasts and interactive Q&As from more than 100 of the world’s greatest writers and thinkers.” The program has clearly important financial support from a principal sponsor, Baillie Gifford, and from a “principal global partner,” the Welsh Government, the latter of which is also sponsoring an associated educational program.

The Literary Festival ‘At Home’ 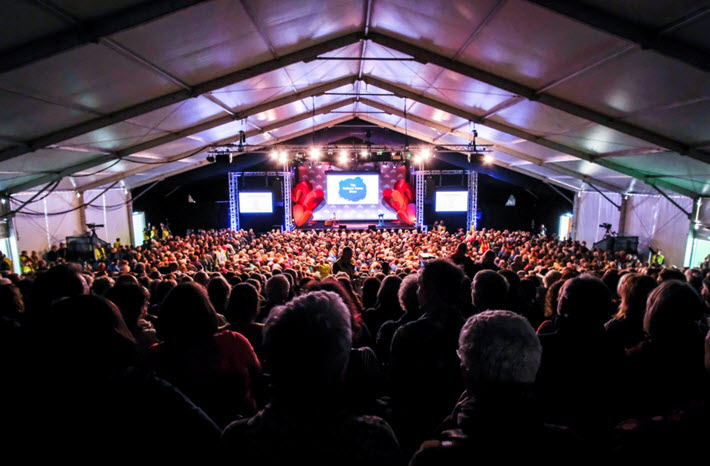 And this is where the whole do-it-digitally effort becomes interesting, particularly for world publishing, which desperately needs to leverage the formidable reach of the digital dynamic while the pandemic wrecks budgets, staffing, P&L statements, and release calendars.

At first glance, the Hay program looks remarkably like it does for its usual physical programming, covered by Publishing Perspectives for many years, as long as connections hold. And much can be produced in advance if a program wants to do that, so that the “live” delivery of an event is actually a pre-edited video simply streamed at a given time. This was the case on Tuesday (May 5), for example, in an effiicently pre=produced presentation on children’s books in China from the Bologna program and, earlier, by Sharjah and Kuala Lumpur when they streamed, respectively, their closing and opening “ceremonies” for the UNESCO World Book Capital program.

There’s nothing wrong with pre-production, by the way. It’s the smart way to try to ensure that as few technical glitches as possible can ambush an event. 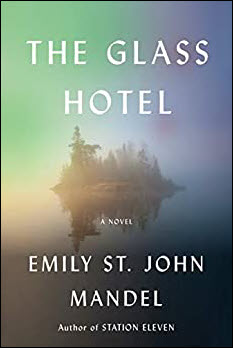 The Hay plans to go for more actual live activity by using the Crowdcast platform, which supports some give-and-take with viewers. You might, for example, want to see the Canadian author Emily St. John Mandel later today, with Hachette’s Regan Arthur. The session is part of the Montclair “Literary Festival at Home,” on her new book The Glass Hotel (Knopf, March 24). Mandel’s 2015 Station Eleven, of course, has been a frequent reference during the onslaught of the coronavirus COVID-19 for its depiction of a world-stopping pandemic. Just check the link for a time check from wherever you’re reading us today.

But that “at home” element in the Montclair program’s name for its own digital iteration is a key to how publishing’s marketing people, in particular, are going to be grappling with the need to pull an audience.

As more events are forced online in the pandemic, the question is going to become how readily anyone can pull viewers back to their screens again, again, again to watch people—even very popular people—speak in sometimes airish, echo-y audio from their bedrooms, kitchens, and patios. (If you’re not aware of what a big issue this has become in online channels, you might want to follow “Room Rater” @RateMySkypeRoom on Twitter for its smart quips on personalities’ efforts to project an inviting studio look.)

Hoping To Stage ‘a Digital Party’

The real challenge ahead—and not just for publishing but for many industries, the creative ones in particular—is to find ways to make the digital plains and plateaus buzz and crackle in attractive ways that are fit to purpose. That’s going to take some innovation. Just plumping down at your laptop to do a reading you’d rather have done standing at a lectern won’t always fill your ether with applauding fans. 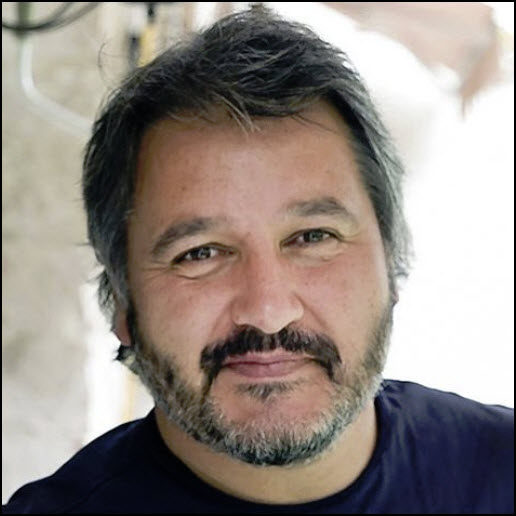 As soon as that young award-winner’s recitation of his latest poem looks just like the conference call you suffered through at 10 o’clock this morning, you’ll be hunting for the Netflix button on your Roku remote control. This is not publishing’s fault. The rest of the world simply must crawl up onto the same digital raft, until someone yells ‘Vaccine Ho!” So it’s a challenge, a growing one.

The key advantage, however, is universal range. An Internet audience can include anyone anywhere with a connection. That’s the gain.

In a prepared statement for today’s programming announcement, Hay’s founding director Peter Florence is quoted, saying, “Our Haymakers [the Hay’s name for its donors] and partners have given us this fresh opportunity to celebrate the stories and ideas that we love. We’ll be zinging the program as if from a green field in Wales and welcoming readers from around the world into a digital party. So, let us, ciphers to this great accompt, on your imaginary forces work…”

We’ll very quickly note some of what Florence and his fine team are planning to “zing” at you.

Where you see italics, you’re reading book titles that are, of course, part of the promotional value of a Hay appearance. This year, Waterstones is creating an online bookstore for the event, which organizers tell us, the sales of books at which “forms a substantial part of our income.” The program will also encourage shoppers to utilize their local independent bookstores.

Below is a promotional video just posted to YouTube today for the Hay Festival Digital events to come.

Unable to look around the elephant in the online room, Hay organizers tell us, “Global health and the COVID-19 pandemic take center stage in conversations with professor of immunology Daniel Davis and Devi Sridhar, the global health expert who delivered a prescient festival event two years ago predicting the pandemic. 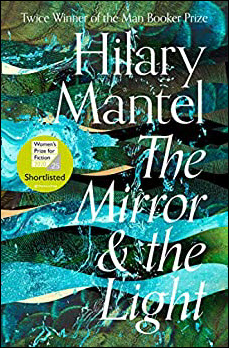 There’s much more in world affairs, activism—including Gloria Steinem talking to Everyday Sexism founder Laura Bates about her latest book The Truth Will Set You Free, But First It Will Piss You Off: Thoughts on Life, Love and Rebellion—economics, science, and more.

At this link, you’ll find a full program of events, broken out by date. Be sure to look ahead, as there’s registration for each event with a set number of registrations for each session. 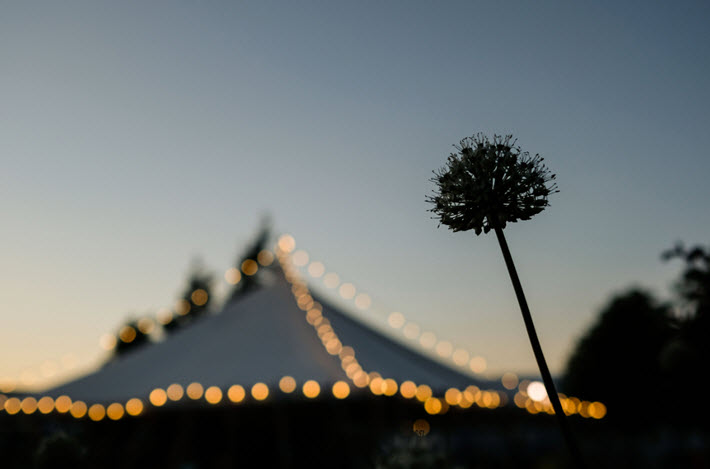 More from us on the Hay Festival programs is here. And more of our coverage of the COVID-19 pandemic and its impact on international book publishing is here and at the CORONAVIRUS tab at the top of each page of our site.