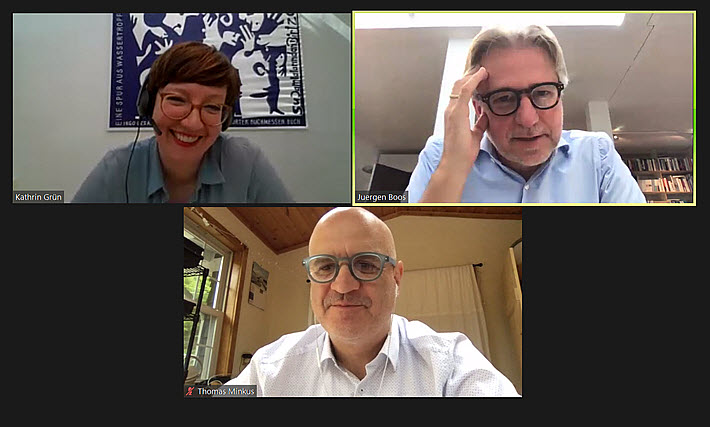 In its ‘special edition’ format now being planned for October 14 to 18, Juergen Boos says, the trade show should be able to accommodate up to 20,000 visitors at once on the fairgrounds.

Frankfurter Buchmesse’s Kathrin Grün, Juergen Boos, upper right, and Thomas Minkus speak with international journalists on May 28 about the announcement that the trade show plans both a physical and digital edition in October. Image: Publishing Perspectives

Following Wednesday’s news that Frankfurter Buchmesse 2020 is to be produced as a physical and digital evocation event, the book fair’s leadership has held a news conference to fill in more details.

The book fair’s president and CEO, Juergen Boos, was joined by Thomas Minkus, vice-president for English-language markets, and Kathrin Grün, the fair’s PR and communications chief, in fielding journalists’ questions.

Overnight, many in the world publishing industry have been absorbing the news that a physical show is part of the plan, and the complex effort is being undertaken by the Frankfurter Buchmesse and the Börsenverein des Deutschen Buchhandels—Germany’s publishers and booksellers association—with the close cooperation of the State of Hesse, City of Frankfurt, and the fairgrounds complex, Messe Frankfurt.

Boos says that thanks to the depth of the collaboration with the Messe, it will be possible to have as many as 20,000 visitors to the fair on the grounds at one time and that the entire complex will be made available to the fair—including newly rebuilt and renovated halls. This offers an enormous amount of space to work with, supporting the kind of groundplans that are being developed to allow much larger stands and wider concourses for distancing.

Needless to say, the coronavirus COVID-19 pandemic is a shifting context, and it can’t be known yet how it will impact Germany, Europe, and the fair on the October 14 to 18 dates of Buchmesse.

In response to Publishing Perspectives’ question, however, Boos said that exhibitors and trade visitors who find that they need to cancel because of changes in the public health conditions or travel restrictions will be refunded “100 percent of what people have spent on their stands.”

As yet, he said, “We don’t see any major cancellations by now, so it’s about the same as last year. But this is going to change because of the travel restrictions.”

Some of the major publishing companies are both working with the fair in terms of helping it to accommodate their needs. Some are considering having reduced space on their stands and instead focusing on sending staffers. With work stations being made available to business participants, many will find it possible to operate in a less centralized format.

“We’ll have different ways of participating on the fairgrounds,” Boos said. “We aim to create a big media presence, so we’ll have the support of the major publishers” based in Germany. While it looks like those leading houses may not build stands, he said, but will participate.

If anything, Boos said, the pandemic’s disruptions to the industry and to life in so many parts of the world are what has driven the commitment of the fair, the City of Frankfurt, and the State of Hesse, all three of which are working in close coordination.

Boos: ‘Publishers and Booksellers in Crisis’

“After the situation we’ve had in the last few months,” Boos said, “we’re seeing a lot of publishers and booksellers in crisis. Especially after Bologna Children’s Book Fair and London Book Fair didn’t take place along with many other book fairs, there’s an urgent need, actually, to do business again, to talk to each other, to build up some creative attitude, as well. But it’s clear that we also need Frankfurt to interest the general audience in books again. And this is worldwide.

“There’s an urgent need, actually, to do business again, to talk to each other, to build up some creative attitude, as well.”Juergen Boos, Frankfurter Buchmesse

“So those are two aspects, and then there’s also the political dimension. After having had political discussions last year on the fairgrounds, discussions that were very focused on topics that don’t seem to be important anymore because now the world is different.

“And we have to face these challenges and discuss this. This is what books do anyway. And we have to give these books a stage, also knowing that it’s going to be a very special edition of Frankfurt.”

The fair will utilize IPR License, the digital marketplace for international publishing rights and licensing, as part of its online offering to provide features to the worldwide industry, such as a rights repository, a catalogue of players, communications and, most importantly, a matchmaking facility that can bring together rights holders and buyers.

At the same time, the Literary Agents and Scouts’ Center, the LitAg, will have a substantial physical presence, taking advantage of newly renovated space for lots of distancing in Hall 6.1.

The digital offering is also expected to have some participation from German television and will feature complimentary inclusion of all exhibitors and trade visitors.

The Arts+, the program that bridges publishing to many other media—film, television, technology, art, music, and so on—is expected to play a prominent role in the programming (which is expected to be firmed up by the end of June).

The Frankfurt Pavilion, a relatively new addition to the fair for central events such as CEO Talks and opening press conferences, likely will not be something used this year, Boos said, as it’s comparatively small. The Agora, however, in which the pavilion normally stands, holds many possibilities for good-weather events because of the advantages to public health safety of outdoor programming.

At this point, many questions are without answers, of course. For potential trade visitors coming from outside the European union, there’s no way to foresee at this point what if any quarantine requirements could be in place at the time of the fair.

And today, Deutsche Welle reports that the German chancellor, Angela Merkel, has again stressed that despite easing restrictions, “the virus is still there” and that all personal precautions must be maintained, even as many other nations look at Germany’s track record with the virus with envy.

And while there will be some programming for the public on the weekend—when citizens from Frankfurt and the region normally flock to Buchmesse as a favorite outing—even this will, of course, have to be reconfigured for safety. “Don’t expect the cosplayers this year,” Boos said.

Indeed, everything, Boos said, will be quite different this year, although the development of the digital component will be something the fair will want to carry forward. Marketing chief Katja Böhne, he said, calls this “Frankfurt Special Edition,” and that seems, he said, “a good way to describe it.” 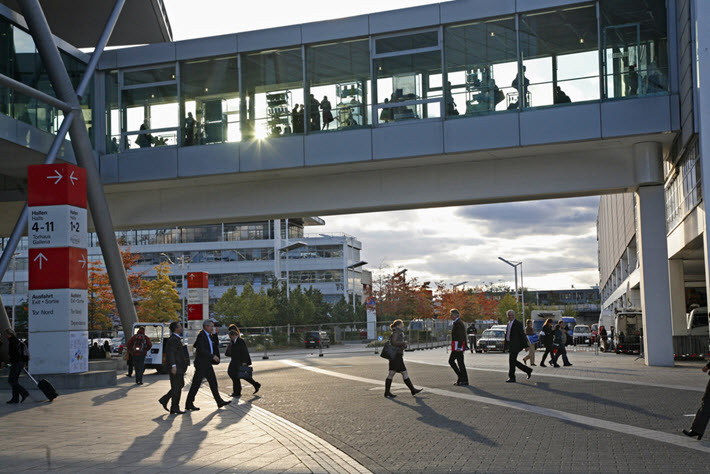 In the Agora at Messe Frankfurt, the fairgrounds on which Frankfurter Buchmesse are held. Image: FBM, Peter Hirth