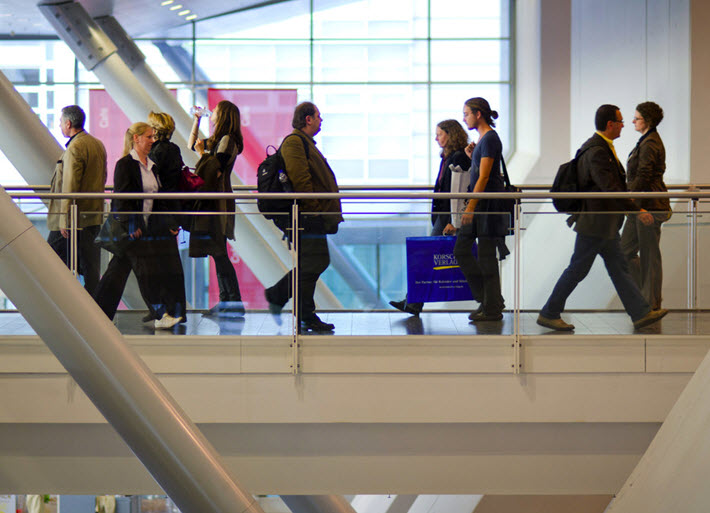 Anticipating in-person participation from across Europe—and from abroad as travel restrictions allow—the fair will go forward, today called ‘part of the DNA of this city’ by fairgrounds executive Uwe Behm. 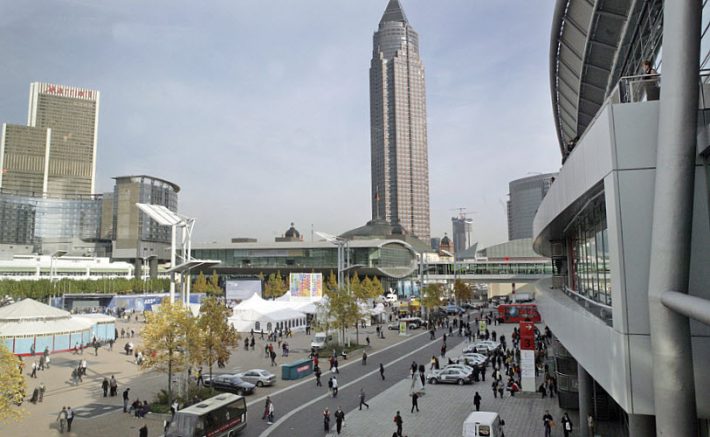 A view of the Agora at Frankfurter Buchmesse. Image: FBM, Peter Hirth

Boos: “More Than Ever Important To Hold the Book Fair’

Following today’s approval by the supervisory board of the Börsenverein des Deutschen Buchhandels—Germany’s publishers and booksellers association—Frankfurter Buchmesse president and CEO Juergen Boos has announced a plan to stage both a physical book fair and “an extensive virtual program.”

Closely watched by the world publishing industry, the decision to move forward with the 72nd iteration of the world’s largest book trade show has become a symbol of the book business’ struggle during the coronavirus COVID-19 pandemic. A topic of speculation for many weeks, the news that a major undertaking will be mounted stands as both a symbol of Germany’s commitment to its place in the international industry and, for many, a signal of light at the end of a terrible tunnel.

“This year,” says Boos on informing the news media, “it is more important than ever to hold Frankfurter Buchmesse.

“With our presence at the exhibition center, book events on-site and virtually, we create publicity for authors, for the industry, for our topics.

“Because of the coronavirus, the Frankfurt Book Fair 2020 is a special edition—a program on-site combined with future-oriented digital formats. 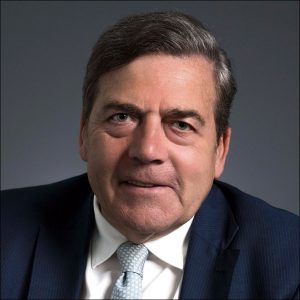 Speaking for the Börsenverein’s board, its chair, Siegmar Mosdorf, has joined Boos in the announcement this afternoon, saying, “Frankfurter Buchmesse is the showcase of the international book industry and has therefore been increasingly popular in recent years–not only among the specialist public and in the rights trade, but also among readers.

“It has become an international agora of intellectual exchange.

“We want to use this element–the fair’s component of discourse—even in times of crisis and maintain it for the future of the book industry.”

Organizers messaging the media from Frankfurt’s offices on Braubachstraße today describe the plan as utilizing space—both physical and digital—in unusual ways to accommodate the safety requirements of the pandemic.

“It’s planned to have the Buchmesse on the exhibition site,” they say, “and decentralized in the city of Frankfurt am Main—and at the same time virtually.

“The basis for the implementation of the on-site event is a detailed health and hygiene concept that implements the then-applicable protection regulations of the State of Hesse and ensures the safety of the visitors, exhibitors and employees participating in the fair.”

As many of Publishing Perspectives’ international readers know, Germany is a federation of jurisdictions, not unlike the United States, and it’s only with the approval of the Hessian government that the program has been allowed to proceed.

“The public order office and the health office of the city of Frankfurt,” say organizers, “were won over by the hygiene concept developed jointly by the book fair and Messe Frankfurt,” the latter, for those not familiar with the event, being the sprawling exhibition-center campus on which Frankfurter Buchmesse is held.

“Because of the dynamic situation,” organizers say, “the continuous professional evaluation of the overall situation and constant adaptation to the applicable legal requirements will be essential.” 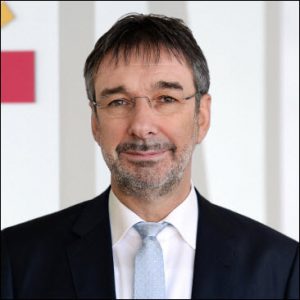 And Uwe Behm, managing director of the fairgrounds, Messe Frankfurt, is quoted in today’s news, saying, “Frankfurter Buchmesse is part of the DNA of this city and also an icon of the trade fair industry. We’re very happy that the industry has chosen to stage a 2020 book fair, sending a very positive economic signal.

“As is always the case at Messe Frankfurt, the safety and health of all participants has top priority. We’ve planned extensive measures regarding distance rules, visitor guidance, and hygiene, and will adapt the concept to current knowledge and requirements.

“The implementation will be very structured and we’ll support Buchmesse with our full commitment.”

Early Details: A Work in Progress

As announcements are made, admission to Frankfurter Buchmesse is being planned to be contactless after pre-registration and activity is expected for now to be centered in Halls 3.0, 3.1, 4.0, 4.1, 6.0, and 6.1. Image: FBM, Peter Hirth

An early detail that will be of keen importance to literary agents: The “LitAg,” as it’s known–the annual Literary Agents and Scouts Center–is planned for Hall 6.1.

What’s more, Guest of Honor Canada is, at this point, being advised by fair organizers of “a concept that’s tailored to the situation.” In consultation with the Canadian ministry of culture and Canadian Heritage, then, further decisions will be forthcoming on the guest of honor plan for the fair.

Frankfurt is working with the leading German houses including the Random House publishing group, the publishers of German Bonnier, the Holtzbrinck publishers, and the Bastei Lübbe group. These publishing powers have initiated a new event concept, for which more details soon will be known. They’re working now with Buchmesse on that concept, its communication, and implementation. There are other proposals being put forward by parts of the world industry, as well, and they’re engaging now with Frankfurt on those.

In his communications today, Boos clarifies that the amalgam of both physical and digital elements of the fair are at this point still in development but are meant to be all-encompassing so that participants either on-site or off will have the access they need to the fair’s activities. “We’re currently developing a number of digital formats,” he says, “that respond precisely to customer needs and enable the participation of companies and players from the publishing and related industries worldwide at the 2020 fair.”

What he’s describing is a presentational capacity that will enable publishing players with company and product presentations; occasions and formats for initiating business; contact with business partners; an explication of market trends; and further educational elements.

To keep consumers and reading fans close to the special life of the 2020 fair, a weeklong online program is being planned around a BookFest center from which the fair and its media partners can initiate discussions and present new titles and authors. 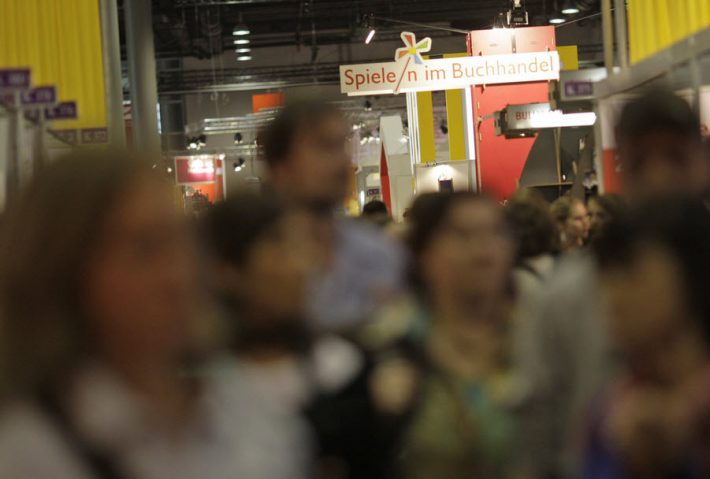 In Hall 3.0, one of the halls being used for the 2020 fair at Frankfurter Buchmesse. Program planning and extensive coronavirus protection particulars are expected by the end of June. Image: FBM, Peter Hirth

While a great deal of planning still is to come in terms of pandemic-related safety precautions and programming (expected at the end of June), there are a series of physical-site details available for us to share with you today:

At this writing, the 1:32 p.m. ET update (1732 GMT) of the Johns Hopkins Coronavirus Resource Center reports Germany–currently with the eigth largest caseload in the world–with 181,524 cases and 8,134 deaths, in a population of 83 million.

Reuters’ Sabine Siebold, Michael Nienaber, and Madeline Chambers are reporting today that Germany is expected to lift a warning against travel to 26 sister member-states of the European Union, starting June 15, according to comments from Heiko Maas, the German foreign minister. In addition, Reuters has been told that non-EU states Britain, Iceland, Norway, Switzerland, and Liechtenstein are to be included.