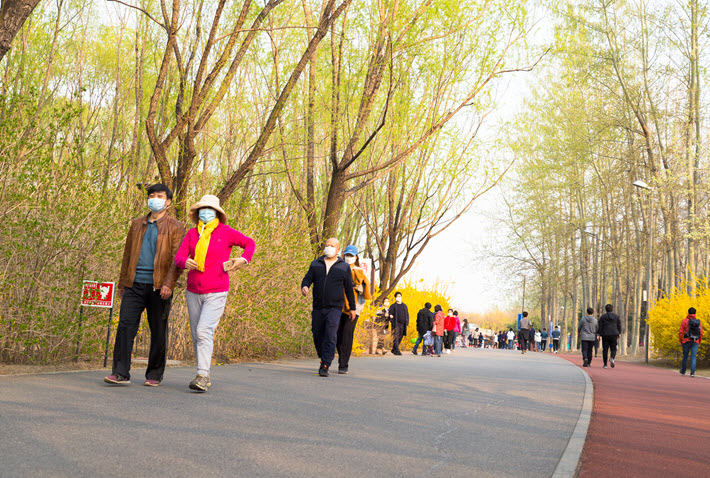 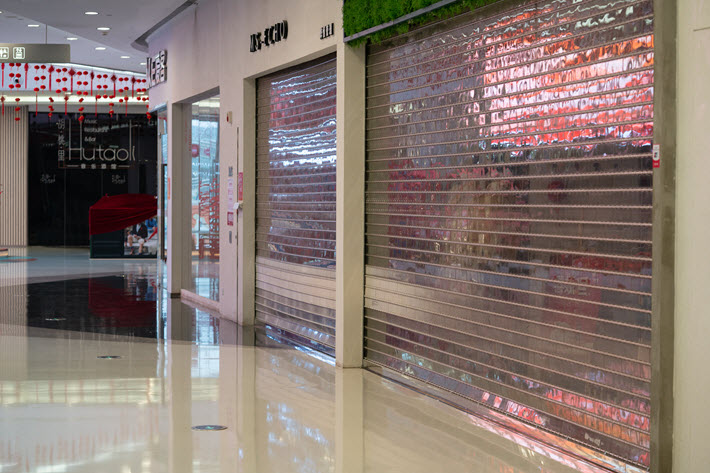 Shuttered storefronts in a shopping mall in Wuhan on the first day of its lockdown, January 23. Image – iStockphoto: Julien Viry

With hard data on publishing market impact still hard to come by in many parts of the world, some of the effects of the COVID-19 outbreak on the Chinese market now can be seen in new research provided to Publishing Perspectives by OpenBook Beijing, the statistical research firm that helps produce our monthly China bestseller lists. 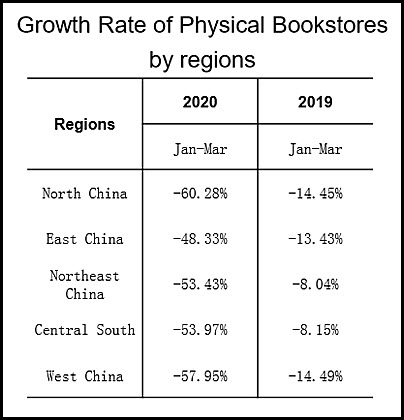 The figures we see now may not fully reflect the gravity of the impact.

Much remains in flux, as we know, particularly because the Chinese market—having been the first to take the brunt of the pathogen’s appearance—now is working both to ease restrictions where possible but also to forestall new caseload accelerations or outbreaks relative to travelers. Internally, the country operates a sophisticated QR code-based smartphone app with which it tracks its residents, permitting or preventing their access to various venues, services, and activities.

The novel coronavirus’ appearance, of course, was made first in China in December (hence the “19” for 2019), with Wuhan in Hubei Province central to the event.

Just about all else now has become mired in political controversy, as the Donald Trump administration in the United States presses two assertions: one, that the virus’ assault on humans wasn’t the result of a species jump through wet market activity, but the product of a laboratory, and, two, that China withheld from the world information on the nature and severity of the threat in order to hoard for itself medical equipment and supplies to fight it.

Today (May 4), as CNN’s David Culver and Nektar Gan report from Shanghai, China’s state-run Global Times’ editorial board emphatically has denied US Secretary of State Mike Pompeo’s assertions in this regard as “groundless accusations” and “bluffing.”

The New York Times’ team updates Trump’s comments on China. He told Fox News on Sunday, “My opinion is they [the Chinese authorities] made a mistake. They tried to cover it, they tried to put it out. It’s like a fire. You know, it’s really like trying to put out a fire. They couldn’t put out the fire.”

Widening the controversy, as Culver is reporting in liveshots this morning, are assertions that Australia and other nations may also be questioning China’s early handling of what would become a world pandemic.

Against the backdrop, then, of increasingly fraught international relations and Beijing’s efforts to restabilize its own economic and social operations, OpenBook’s research shows heavy effects in its tracking of more than 10,000 online and physical retail venues excluding those of Taiwan, Hong Kong, and Tibet. 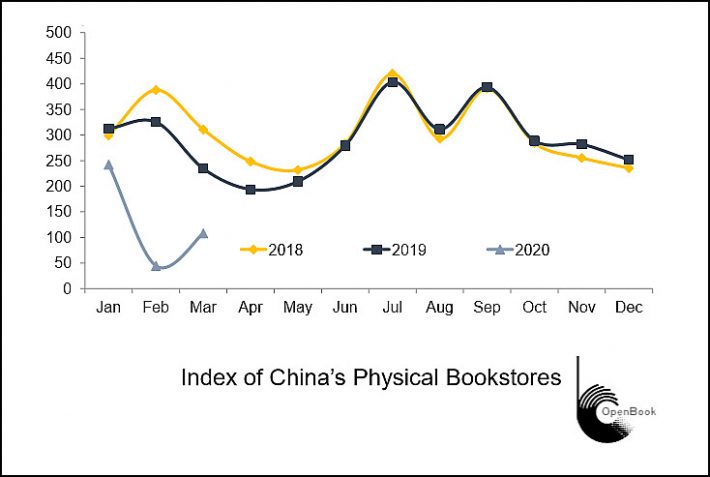 Graphically, the sharp change in sales through physical bookstores is striking in the chart above. The Chinese market, having demonstrated dependable contours in its monthly activity patterns in 2018 and 2019 simply is seen tanking in January and mid-February, with something of a comeback seemingly starting to appear in late February and March.

The team at OpenBook tells us that they don’t necessarily anticipate the kind of “V-curve” rebound that the late-February and March performance might suggest. “Although there is a need to resume work”—the economic imperative facing so many world markets in lockdown—”different regions of China are still implementing certain prevention and control measures to reduce gatherings in indoor spaces, while consumers are concerned about going shopping in offline stores.

“In addition, as books are not necessities,” the group’s Rainy Liu tells us, “April to June is a slack season for book sales in China. So the recovery of physical bookstores will still take some time.” 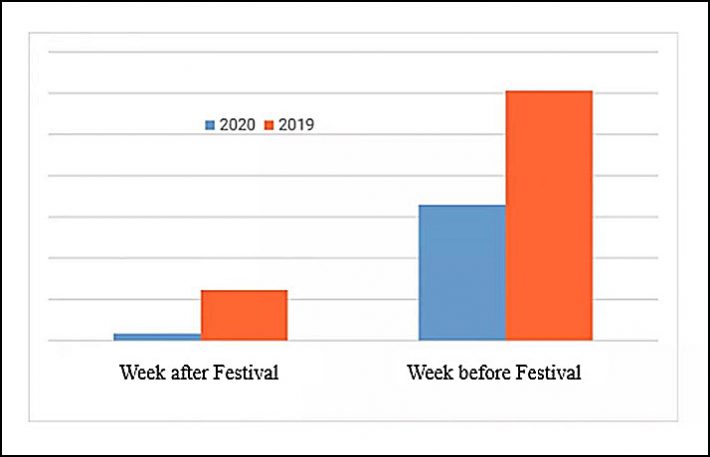 Sales of books in physical stores in China in the week before and the week after the annual late-February Spring Festival, 2019 (in orange0 and 2020 (in blue). Image: OpenBook

Another element that has compounded the impact of the viral outbreak is its timing relative to the annual Spring Festival, which this year had put public holidays on the calendar in China for January 24 to February 2—coinciding closely with the explosive arrival of the virus’ effects, focused in the Hubei region.

“During the Spring Festival holiday,” Liu tells us, “readers often use their leisure time to go to physical stores to buy books, especially titles for parents to read with their children.”

Much of this trade was short-circuited, and OpenBook’s charting includes a look at the 2019 and 2020 sales registered by bookstores in mainland China in the week before and the week after the festival. The shortfalls in this year’s sales by comparison to last year’s are compelling. 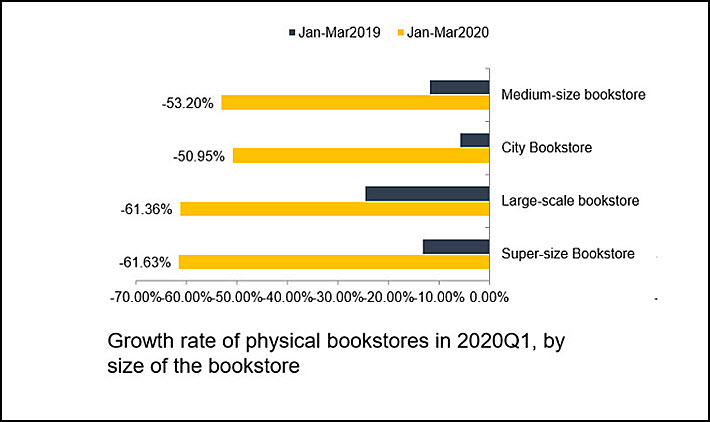 During China’s first quarter of 2020 in the COVID-19 outbreak, larger physical bookstores took bigger hits than smaller ones. Image: OpenBook

Further insights into the experience of physical bookstores from January to March, show an interesting trend that disadvantages larger bookstores and those in the big first- and second-tier cities.

In case you’re not familiar with China’s rankings of cities, a first-tier city normally has more than 15 million people, a second-tier city has 3 to 15 million, and a third-tier city has 150,000 to 3 million residents. Levels of business and affluence also accrue to these rankings.

As tracked by OpenBook, the top-tier cities saw the largest drop in sales growth rates for physical bookstores in the first quarter, an aggregate plunge of 63.2 percent for tier-one cities The tier-two cities were close behind at a drop of 57. 2 percent. And tier-three cities fared the best at a drop of 46.6 percent.

Online Sales: Up, But Only After a Dip 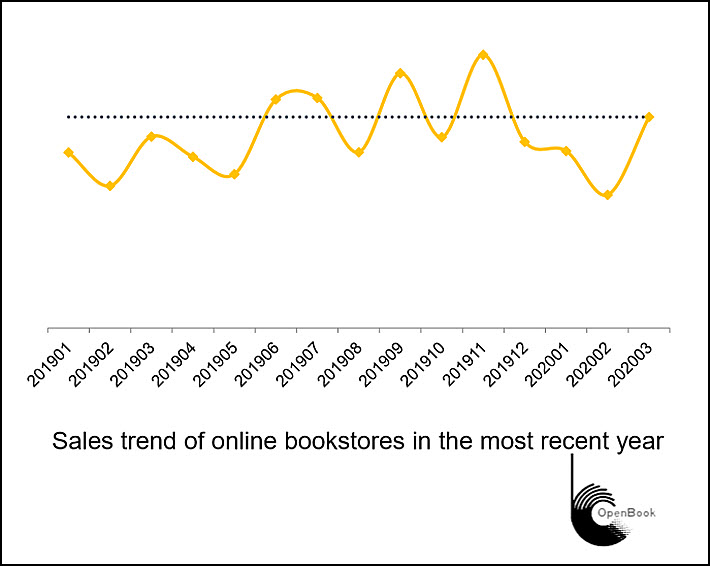 The 3-percent gain in online book sales seen in the first quarter of 2020 came in March after initial coronavirus outbreak-related distribution and delivery challenges. Image: OpenBook

While physical retail sales clearly were diving, the gains detected for China’s online book sales in the first quarter of the year weren’t without a setback of their own.

As consumers and publishers shifted to digital orders and sales, OpenBook’s researchers say that logistical issues compromised distribution and delivery for a time. By March, such supply chain factors seem to have been recovering, giving online sales a modest boost of some 3 percent for the quarter.

In terms of categories of content seen moving in the Chinese market in the coronavirus-pressured quarter, teaching-aids, teaching materials for kindergarten, primary and secondary schools, and biography were the only three categories showing growth.

Those biography sales were driven mainly by the publication of new books about the president of the People’s Republic, Xi Jinping in Ningde and Xi Jinping in Xiamen. They were released in January. Another strong seller, familiar to Publishing Perspectives readers for its resilience on our China bestsellers lists, was Tara Westover’s Educated: A Memoir, in China published by the Nan Hai Publishing Company.

And the educational sales were related to the closures of schools and the need for parents to manage their children’s studies at home. “After all,” Liu tells us, “leisure reading can be temporarily abandoned, but the teaching of primary and secondary schools could not stop, and the curriculum content remains in high demand.” 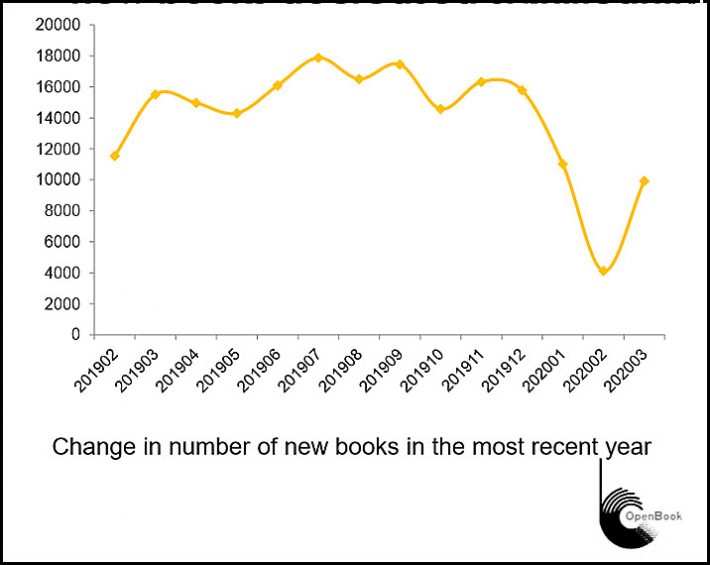 Releases of new titles in the January to March period of 2020 dropped precipitously, although some rebound was seen in March. Image: OpenBook

“The outbreak has had a big impact on the publication of new books,” Liu says.  She points to January and February as the worst months, with a promise of some recovery seen in March.

Printing plants were closed or at best hobbled during the crisis, prompting 70 percent or more of publishers to report severe disruptions to their anticipated output. Both new-title and backlist content was hardest hit. In addition, when lockdowns went into effect after the Spring Festival dates, orders already in place were largely frozen, contributing to the paralysis of the supply chain up and down the industry.

The OpenBook team does add that it spotted increased interest in plague-related literature including, of course, Camus’ The Plague and García Márquez’s Love in the Time of Cholera.

The China bestseller reports from Publishing Perspectives are here. More from us on the Chinese market is here, and more on the coronavirus pandemic is here.