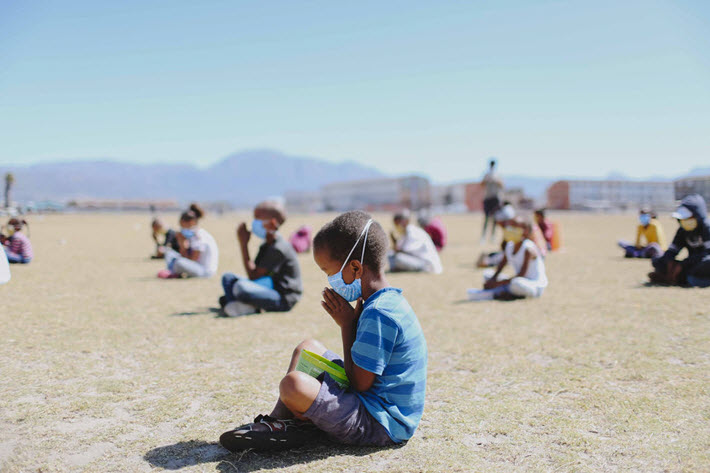 For a month, ‘we saw all bookstores closed’ in South Africa’s lockdown, says Imagnary House children’s book publisher Brad Harris. Moving to digital channels and staying in touch with other publishers helped.

Our Coronavirus Worklife series over the weeks of the pandemic has evolved somewhat. Initially, we were in touch with various world publishing companies about their experiences in adjusting to often radically changed workplace conditions, whole staffs moving to remote operations.

The Toronto-based Rakuten Kobo in early March, for example, already had begun test runs–sending its staffers home to operate remotely, as CEO Michael Tamblyn said, “on our own terms,” rather than waiting for the moment the team might be forced to leave company headquarters.

Since those days in which simply getting a physical operation adapted to working at safer distances in the contagion, the effects of the onslaught of the coronavirus COVID-19 have been tracked in 212 countries and territories, virtually every publishing market on Earth. Nothing and no one is left untouched by a pathogen confirmed to have infected 4,205,801 people in the world, according to the 9:55 a.m. ET (1355 GMT) update to the Johns Hopkins Coronavirus Resource Center.

The world death toll at this hour stands at a profoundly disturbing 286,940. And it’s clear that many more fatalities are coming. Russia has jumped quickly in recent days into the second spot in the world for caseloads with 232,243 cases, second only to the United States’ 1.3 million cases.

South Africa, by contrast, has 11,350 confirmed cases at this writing, and has registered 206 deaths to the virus. Many public health experts have worried about how the nations of the African continent can handle the virus’ advance. This is a market finding out. As Tommy Trenchard reported in late April for NPR, even its lockdown constraints have been unequally applied.

“In Cape Town,” Trenchard writes, “the second-largest city, well-to-do suburbs sit side by side with sprawling, corrugated-zinc townships. Driving from one neighborhood to another can be a jarring experience at the best of times. But since the country went into lockdown in late March, the city’s social divisions have been brought into sharper focus than ever.”

And as you may recall from our coverage last week of the Bologna Children’s Book Fair’s digital evocation, the shortlist for the African region of the Children’s Publisher of the Year award included South Africa’s Imagnary House. And that spelling–”imagnary,” not imaginary–is intentional. The press was established in 2015 and focuses on local children’s and YA literature, both fiction and nonfiction. 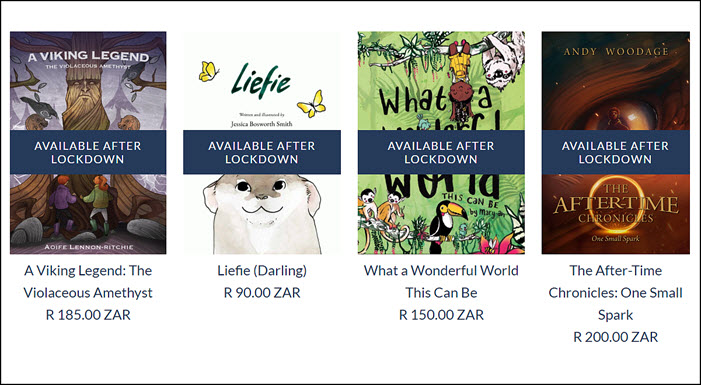 In our exchange with the company’s founding publisher, Brad Harris, we’ve learned that in the month of April, Imagnary House’s revenue from print sales “dipped 100 percent,” as Harris puts it. With the South African government having locked down bookstores along with other retail, print simply wasn’t selling. And this was the experience of a publisher deeply committed to his constituency, to a population of children whose needs in literature can be acute. 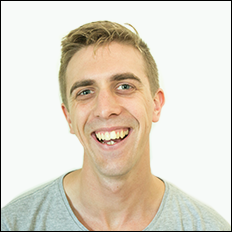 Harris says he named his company Imagnary House based on a mentor’s advice: If you walk in the measurable, you miss out on the imaginable. “This phrase summarized my hopes for the local children’s literary scene,” he says, “in that I wanted to inspire new generations with imagination before moral lessons.”

The misspelling, imagnary, was a child’s mistake in crayon. He decided to adopt it because “it mimicked the childlike heart I was after.”

The conditions in which those new generations live impinge directly on the company. “Our business primarily relies on local book sales and rights sales of our titles,” Harris says. “We also rely a lot on our connection with our local community, as our book sales are heavily connected to what activities we plan and initiate with the public—readings, launches, school visits, and so on.

“We’re a fairly small team at Imagnary House,” Harris says. “Our company worked remotely even before the COVID-19 crisis, and we were well versed in video conferencing, chat apps, and the like. We did, however, meet up regularly in person at shared office spaces for strategy meetings—planning new titles, strategizing launch activities, business pivoting. That’s been challenging in the shift to digital. We do everything locally, from planning to production.”

As in the case of so many world publishing markets, the South African authorities have struggled with their response to the virus.

“We’ve seen excellent decisions being made by government for flattening the curve,” Harris says, “but unfortunately these decisions have also meant that the book industry has taken a sharp dive. Publishing depends on social activities—bookstores, launches, readings, festivals—and we’re being challenged on all of these fronts.

“We’ve seen a large financial impact on our business following South Africa’s total lockdown. From March 27 to April 30, we saw all bookstores closed along with all other retail and all distribution and delivery services. Other than digital, we had few ways to bring in revenue. I foresee short pockets for the majority of publishers in coming months, and that’s likely going to mean holding back on planned titles.” 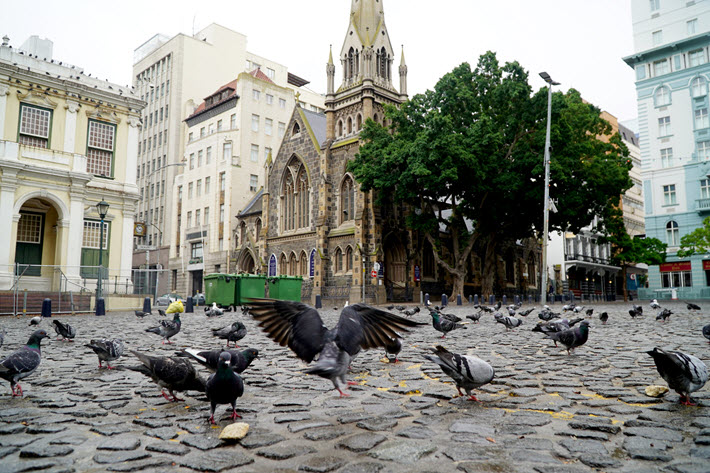 Harris says, however, that things have changed as of May 1, with some restrictions partly eased.

“Currently,” he says, “most bookstores have reopened with 30-percent staff—a policy that applies across most industries. Over a single weekend, bookstores reopened and floods of readers returned. Our primary bookselling chain, Exclusive Books, reported sales over that weekend at around 60 percent of 2019’s comparable numbers, suggesting there’s room for hope.

“Unfortunately, the government soon pointed out that it had only made the sale of books classified as “educational” legal. For many booksellers, whatever lies on their shelves is still being sold, but any new stock bought in must be classed as educational. For most niche and even trade publishers, this is severely restricting. We trust this constraint will lift in the coming weeks to include general trade fiction, nonfiction and children’s books.”

Even if the classification restrictions are lifted, moving inventory is a nightmare at the moment, as Harris describes it. “The restrictions here on logistics make it difficult to operate nationally and almost impossible to operate internationally,” he says. “We’re able to do some road freight, with restrictions, and sea freight to certain locations, but air freight is still disallowed with no sign of it opening up in the near future.”

This, combined with pressures on the rand and downgrades to its status means, Harris says, that his international expenses have grown by 30 percent and local readership faces salary cuts.

“It’s a difficult time for South Africans,” he says, “but we are hopeful, and our immediate community is incredibly supportive.” 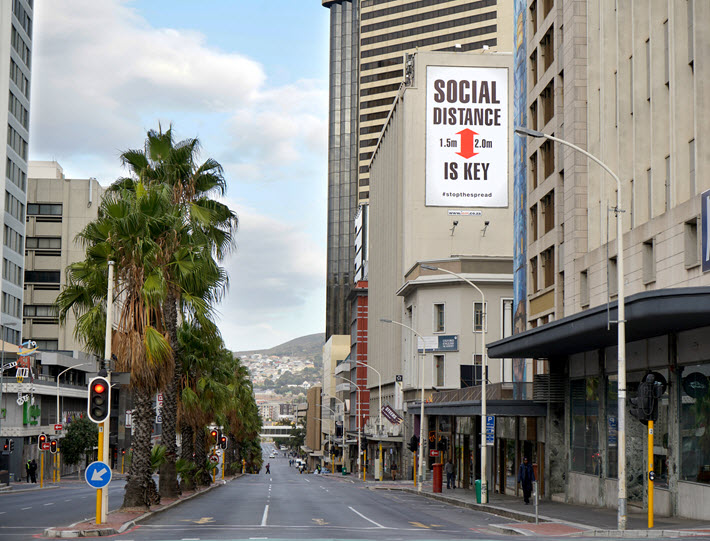 “Our initial challenge was figuring out how to deliver our stories to the public and connect with our readership, having seen all of our distribution and event channels broken,” Harris says. “It forced our team to innovate.

“Thankfully, we were able to shift many of our operations fairly quickly to digital,” he says. “Social media has been a great aid in this, which allowed our authors to do digital events to remain connected with their readerships. We also re-worked our site to have a stronger focus on education and to offer free entertainment resources rather than direct sales, keeping us in contact with our audience.

“Our primary challenge was figuring out how to make up our revenue deficit. We’re reworking our prices currently, because our previous prices were modeled on an entirely different context. We hope to keep them as close as possible to what we had previously. We’re also launching new services, such as creative writing and publishing courses, ” he says, “helping us build into our future authors and staff without relying too heavily on book sales for the moment.”

Harris says he hasn’t had to layoff staffers. “Our management has taken salary cuts,” he says, “and we’ve had to pull back on some planned publishing activities.

And since April, we’ve seen revenue climb up again, especially after building out some new revenue channels. Print is still operating at very low numbers, but we’ve been able to shift to a digital focus and create more sales opportunities to support our business online.” 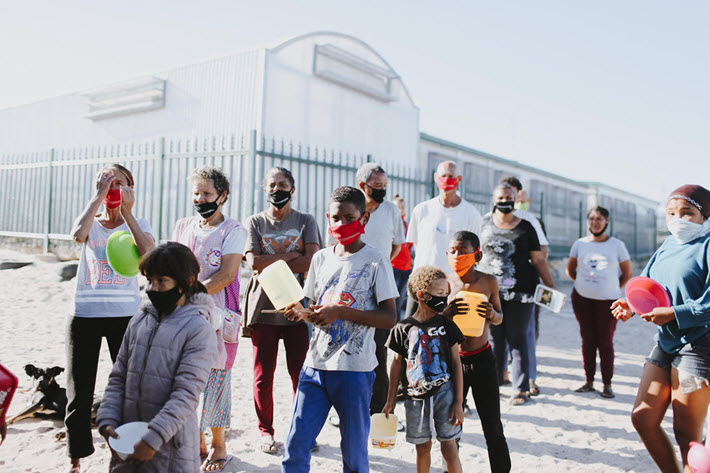 “The South African outlook within our industry,” Harris says, “is hopeful but concerned. With book sales slowly opening up again, all publishers are becoming hopeful about doing what they can in this time to survive.

“There’s a lot of communication happening between publishers, bookstores, and distributors. The industry is aware that we need to support each other during this time. I think we’re also all aware that there are some literary opportunities that will arise from this, which we’re all keeping an eye out for.”

And Brad Harris credits “fairly tight-knit community of publishers in South Africa. We’ve remained connected digitally in this time. It’s been incredibly heartening to remain connected with other publishers and understand that we all face the same issues.

“If we all move forward with open hands, we’ll come through stronger on the other side.

More from Publishing Perspectives on the South African market is here, and more from us on the coronavirus COVID-19 pandemic and its impact on international book publishing is here and at the CORONAVIRUS tab at the top of each page of our site.