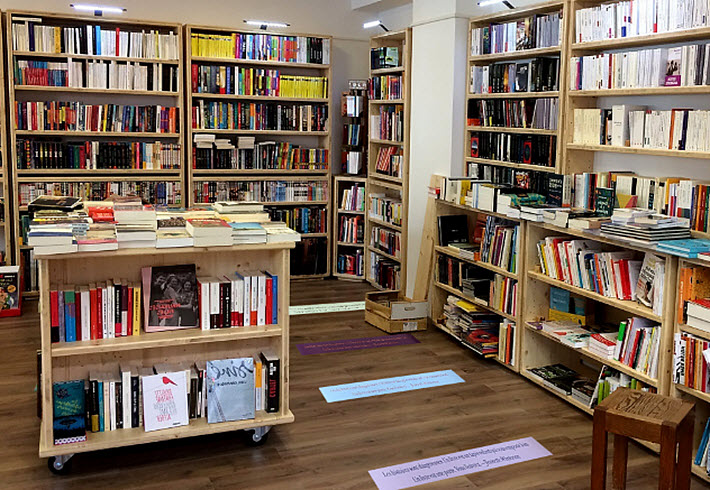 This image shows the colorful adhesive strips with literary quotes on them, part of the Les Arènes kit to help France’s reopening bookstores.

Editor’s note: The Johns Hopkins Coronavirus Resource Center in its 5:32 a.m. ET update (1132 GMT) sees France with the world’s fifth heaviest caseload in the pandemic after the USA, Spain, Italy, and the UK. France is reported to have 170,694 confirmed cases and 25,538 deaths in a population of close to 70 million. Emmanuel Macron has said the May 11 adjustments won’t be a ‘passage to normal life’ but the first in a series of lockdown adjustments. —Porter Anderson

‘A Mix of the Existential and the Poetic’

Pierre Bottura was waiting in line at a supermarket. A security agent was offering people hand sanitizer before they entered, a gesture that seemed to make customers feel safe. And that prompted Bottura, the marketing and sales manager at the independent French publishing company Les Arènes, to lead a brainstorming session with his team. 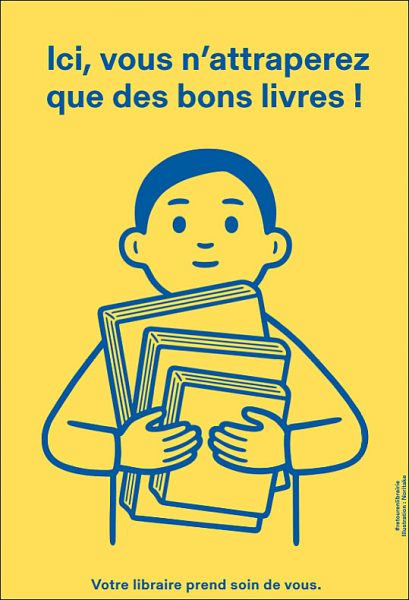 They discussed how they could help booksellers—an essential part of France’s book industry—welcome their customers once confinement was lifted.

If all goes well, the country is to begin its “deconfinement plan” on Monday (May 11). While restaurants, bars, museums, and cafés will wait until early June, many businesses will be reopening. That’s to include bookshops, some of which already are selling books either on a click-and-collect basis or with delivery.

But Guillaume Husson, delegate general of the union of booksellers, said in an April 8 interview with Europe1 that booksellers would need between €20 and €30 million to cover two months of closure.

Part of a very worried industry, Les Arènes’ Bottura and his team came up with a plan for a kit that could help bookstores welcome consumers within the government’s reopening guidelines.

The kit includes a poster with the slogan “The Only Thing You’ll Catch Here Is Good Books.” There’s also a stand for hand sanitizer. And there’s a series of colorful adhesive strips emblazoned with literary quotes to mark safety perimeters before reaching the bookshop’s cash register.

Laurent Beccaria, the founding head of the publishing house, agreed to pay for the campaign, which doesn’t carry the company’s branding. The kit is offered to all booksellers free of charge.

“What I liked about Pierre’s idea,” Beccaria tells Publishing Perspectives, “was transforming a public health constraint into a cheerful and light-hearted experience.”

Les Arènes’ art director Éric Pillault contacted Noritake, a collective of Japanese illustrators whose designs he considers straightforward and universal. Noritake agreed to design the campaign and charged a nominal sum, Bottura says, “allowing us to use the design widely and even abroad.” 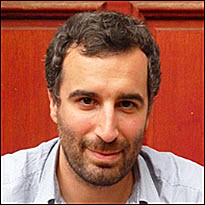 The literary quotes on the adhesive strips were chosen primarily from a collection Beccaria uses to print such lines on mugs used in the office. “We went for a mix of the existential and poetic,” he says. The quotes reference Albert Camus, Clarice Lispector, Jeanette Winterson, Rainer Maria Rilke, and others.

Présence Graphique, a printing company, reduced their prices considerably to make the stand for the hand gel, the poster, and the adhesive strips. And Les Arènes’ distributor, Hachette Livre, agreed to deliver the kit to booksellers without cost.

“That was a strong gesture,” Bottura says, “Hachette got a team working on the kit. None of this would have worked without the logistics.”

A mere 10 days had passed between Bottura’s visit to the supermarket and finishing the planning of the kit. Les Arènes then passed along its offer to France’s booksellers through the company’s sales representatives, each of whom has approximately 200 clients.

There are more-than 3,000 independent bookshops in France. So far, Bottura says, some 500 booksellers have responded.

“We’re thinking about how to expand our operation with partners if we’re going to go from 500 to 1,500 booksellers because we’ve arrived at our maximum in terms of investment.”

‘Super-Enthusiastic About the Idea’ 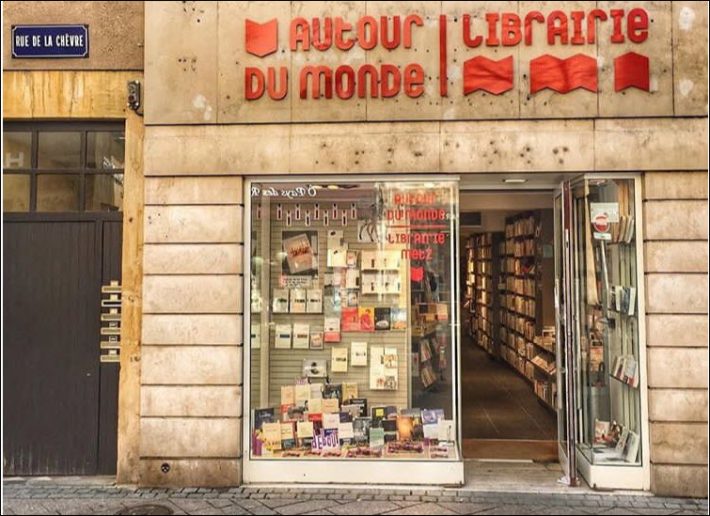 Anne-Marie Carlier’s bookshop in Metz, a city in France’s Grand Est region, which has been hit hard in the COVID-19 pandemic. Image: Autour du Monde

One of the booksellers who responded immediately was Anne-Marie Carlier, whose bookshop Autour du Monde is in the eastern city of Metz, one of the regions hardest hit by COVID-19.

“You could only be super enthusiastic about the idea,” says Carlier, who was a bookseller at other stores for 30 years before opening her own shop in 2015.

With 75 square meters of space (807 square feet), her shop has 13,000 titles and a staff of two booksellers and an apprentice. She says that even during lockdown, she has remained positive thanks to her customers. Since mid-April she has been opening twice a week for customers to pick up books. On the bookshop’s Facebook page, she makes one book suggestion a day. One of her customers asked to buy all of the approximately 50 recommendations.

“People have been sending me checks so that I have liquidity,” Carlier says. “They say they’ll come pick up books once I’m open.”

She named her business—Autour du Monde, around the world—after the title of a novel by Laurent Mauvignier (Les Éditions de Minuit, 2014), and also for how bookshops, she says, “open you to the world. Bookshops are a place for everyone.

“I don’t usually like branding or advertising, but I actually asked the sales rep if there was a sticker with Les Arènes’ name on it so that we could thank them. I’ll find a way to let people know and we’ll thank them.”

Stanislas Rigot, who runs the Librairie Lamartine bookshop in Paris, is dealing with a lot more space than Carlier is. Lamartine has approximately 450 square meters of space (4,844 square feet) with 50,000 titles and 11 booksellers.

For the past two weeks, Rigot’s staffers have using a delivery service to get books to customers in Paris and the near suburbs twice a week. He says that each of these delivery days brings in approximately €4,500 (US$4,875).

“I think the kit is a great idea,” Rigot says. “I like the message, which makes the constraints placed on us pretty.”

Is only one kit enough for a store of his bookshop’s size? “I asked for everything they could send me, and we’ll see,” he says with a laugh, clarifying that he’ll be opening only one entrance at first.

And at Les Arènes, the push is on to welcome France’s book retailers back to business.

“In times of crisis” for the industry, Pierre Bottura writes to Publishing Perspectives in an email, “we realize the importance of every single actor, how we are all linked by a profound, existential love for books.” 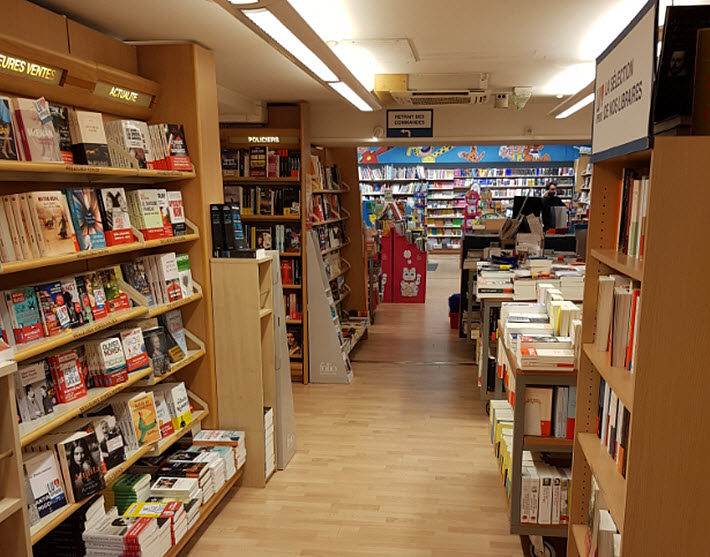 More from Publishing Perspectives on the French market is here, more from us on bookselling is here, and more from us on the coronavirus COVID-19 pandemic and its impact on international book publishing is here and at the CORONAVIRUS tab at the top of each page of our site.