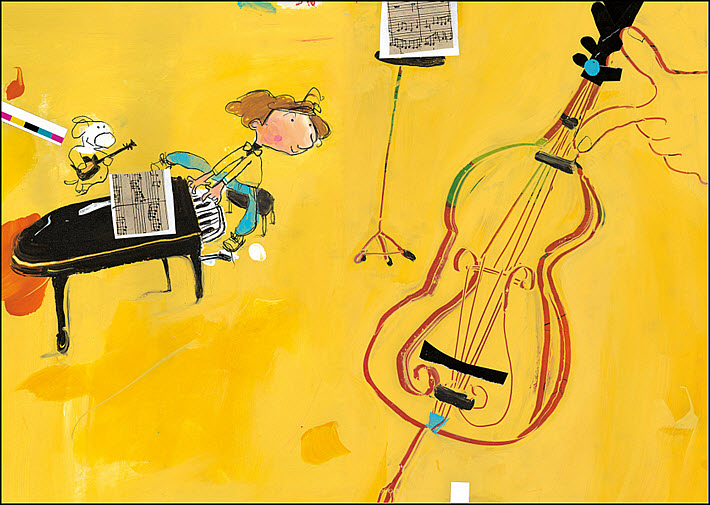 The Bologna Children’s Book Fair drew twice as many visitors online than it draws in a real-life regular staging in northern Italy.

An illustration by Vittoria Facchini for the Bologna Children’s Book Fair gallery tribute to the work of Rodari. Image: BCBF

Translating From Real Life to Digital

Testing the online waters as it goes, the world publishing industry is discovering that the digital dynamic may be a friendlier force for the book business than many print-lovers have believed. During the worldwide pandemic of a lethal virus, digital can sell your inventory and offer bookish events across borders, time zones, and cultures.

When the 57th edition of the Bologna Children’s Book Fair took to the ether—having had to cancel its usual trade show—its effort to create virtual evocations of many elements of the sprawling physical show were closely watched.

Today (May 11), we have numbers for you from the organizers at BolognaFiere, and they’re likely to encourage others contemplating a digital doing of their own, the most recently announced being ReedPop’s BookExpo in the States—our story on that one is here.

Bologna’s online trading facility, operated for it by its production partner PubMatch, is announcing that more than 500 publishers registered on its platform, uploading some 20,000 titles. Of course, there’s no word on actual transactions or even attention to the listings, but that is, at the very least, a lot of content available for display.

Keeping in mind that Bologna normally will draw 30,000 or more internationally active professionals to its physical trade show in the Emilia Romagna region of northern Italy, its report of 60,000 users having engaged with the program is great. (We assume that when they report 60,000 “visitors,” they mean unique users. We’ll adjust this if we hear otherwise.)

The company reports that 75 percent of those users were non-Italian, indicating an excellent balance of in-country interest to the international outreach in which the trade show specializes. Never the best gauge of things, a figure of 400,000 page views is being offered, as well. (A lot of pages can be popped up while users search a site that’s not designed for entirely easy navigation.)

Happy with the conversation on social media, the organizers have declared their effort in digital presentation a success, and they have many reasons to be pleased with their results, certainly.

For the record, today’s much less happy numbers, from the Johns Hopkins Coronavirus Resource Center show Italy with a total 219,080 confirmed cases of COVID-19, with 30,560 deaths.

The international “Children-Spectators” competition is part of a four-year project focused on early childhood and the performing arts. Image: BCBF

Needless to say, there also are lessons to be learned, thanks to the programming here, and further explorations of these formats will follow as more publishing events turn to the Internet for programming, if not for their very survival.

Several points we noticed that may be of interest in ensuing events on the international scale include:

To stand at the physical center of the Bologna Children’s Book Fair in the most normal of years is overwhelming. It has become a hallmark of many world publishing trade shows that myriad events run at once, schedules are confusing, branding is more exuberant than explanatory, and finding things is tricky.

Once translated to the online world, the thing to remember is that when you overload that publishing executive with too many options, too many listings, too many navigational  mysteries, too many platforms, too many formats, and too much sheer goodness, she can let out an exasperated sigh and evaporate by simply closing a browser window. It’s a lot easier for her to make an exit from an overheated online offering than it is for her to find the exit at BolognaFiere (ask anyone who’s been there).

And so, with many congratulations rightly headed to BolognaFiere in Italy today, the bottom line, even in cyberspace, is an old one: less is more. 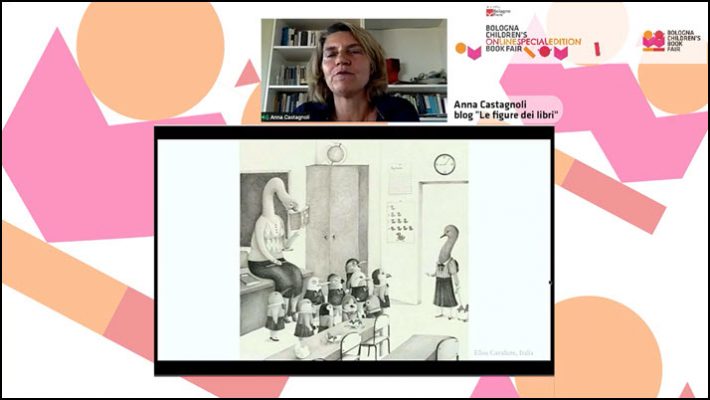 Anna Castagnoli gives a guided tour in Italian of some of the illustrations from the Bologna Children’s Book Fair during its 2020 online evocation. This “big box, little box” format might have given a lot more visibility to the artwork being discussed. From BCBF’s video playout

More from Publishing Perspectives on Bologna Children’s Book Fair is here, and more from us on children’s books is here. More from us on the Italian market is here and more of our coverage of the COVID-19 pandemic and its impact on international book publishing is here and at the CORONAVIRUS tab at the top of each page of our site.