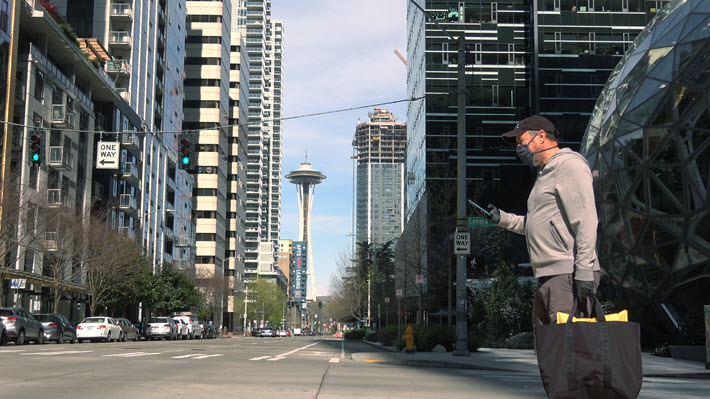 Masked up in Seattle, a pedestrian is pictured on April 17 near the Amazon campus’ Spheres. Image – iStockphoto: Bjorn Bakstad

Adding to $13 Million in Charitable Support

Following its deadline of January 15 for applications, the Amazon Literary Partnership has this morning (May 27) announced $1 million in grants to 66 organizations in the United States. And as the country approaches the terrible milestone of 100,000 deaths to the coronavirus COVID-19, the funds being issued by the program may look better than ever.

In fact, Amazon already has provided COVID-19 emergency relief donations to Artist Relief and PEN America’s Writers’ Emergency Fund, the latter of which is also supported by the Lannan Foundation, and The Haven Foundation.

Publishing Perspectives readers are familiar with Amazon’s program, both for its more than $13 million in funding since Jon Fine directed the establishment of the program in 2009, and for its focus on supporting nonprofit efforts that serve writers, with a traditional emphasis on “overlooked and marginalized writers,” as Neal Thompson, another director of the program, has put it.

Today, Alexandra Woodworth guides the program, which  has touched the work of more than 150 organizations. As noted in earlier coverage, one of the interesting characteristics of this program is that it funds writers but through programs that work with and for them. 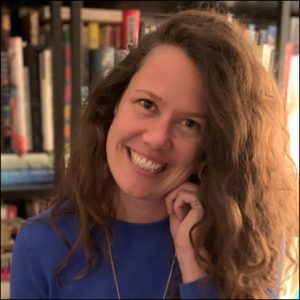 On today’s announcement, Woodworth says, “The Amazon Literary Partnership champions organizations that support writers, poets, translators, and diverse voices at every stage in their career. Given the impact that COVID-19 has had on the literary community, we’re proud to continue to fund these remarkable organizations sustaining literary culture in our communities now and for the future.”

The 2020 roster of grant recipients include organizations from 24 states and the District of Columbia.

‘Instrumental in Helping Thousands of People’

One of the recipients of a grant this year, the popular NaNoWriMo program (National Novel Writing Month) directed by Grant Faulkner. In a prepared statement on today’s news of the grants, Faulkner is quoted, saying, “As a small organization hosting the world’s largest writing event, NaNoWriMo has depended on Amazon Literary Partnership’s support for more than 10 years to help create a global neighborhood of writers focused on inclusivity, empowerment, and encouragement.

“We want everyone to embrace their creativity and make it a priority, and Amazon Literary Partnership has been instrumental in helping thousands of people believe in their story and give it voice.”

Elliot Figman, executive director of Poets & Writers, says, “In times of danger and upheaval, writers help us make sense of what’s happening, expand our capacity for empathy, and imagine the future. So we’re especially grateful to have the renewed support of Amazon Literary Partnership this year. The grant will help us continue ‘United States of Writing,’ which is an initiative to deepen our support for writers nationwide. In a field that’s woefully under-capitalized, Amazon’s support for the literary community is critical.”

Speaking for Lambda Literary, the organization’s executive director Sue Landers is quoted, saying, “The pandemic’s impact on the LGBTQ literary community has been, and will continue to be, devastating. So many of us are struggling to get by, are grieving, have fallen ill, or have been lost. Generous support from the Amazon Literary Partnership will help ensure that Lambda Literary can continue to respond creatively and powerfully to LGBTQ writers’ needs as we move through this historic time.”

In operating a specific poetry fund and a literary magazines fund, the Literary Partnership is assisted by two organizations:

Mary Gannon, who is the exeutive director of the Community of Literary Magazines and Presses, better known as CLMP, says, “Since its inception, CLMP has been dedicated to sustaining the health and extending the reach of the nation’s literary magazines. Often the first places writers find their readers, these publications are essential to the publishing ecosystem, providing fertile ground for diverse voices to thrive.

“CLMP is honored to lend its expertise to the Amazon Literary Partnership’s ongoing financial support of these underserved and uniquely vulnerable publishers.”

And for the Academy of American Poets, Jennifer Benka says, “We’re extremely grateful for the opportunity to work with the Amazon Literary Partnership to support poetry organizations, especially as more and more people are turning to poetry for comfort and courage in this crisis. We appreciate that the Amazon Literary Partnership program was quick to respond in this time of great need.”

More from Publishing Perspectives on Amazon is here, and on authors is here. More from us on the coronavirus COVID-19 pandemic and its impact on international book publishing is here and at the CORONAVIRUS tab at the top of each page of our site.