The UK’s Women’s Prize for Fiction digitally announces its shortlist for 2020, with jurors hoping readers find ‘solace’ in the six chosen titles.

In its announcement today (April 22) from London, the Women’s Prize for Fiction‘s shortlist has returned Hilary Mantel to the publishing awards scene, the jury putting The Mirror and the Light, the third book in the Wolf Hall trilogy, into the running. Mantel has in the past been shortlisted for both of the previous titles in the trilogy, Wolf Hall and Bring Up the Bodies, as well as for Beyond Black.

Another high-profile prizewinner, Bernardine Evaristo—who shared the 2019 “half a Booker” with Margaret Atwood—is on the list for her bestselling Girl, Woman, Other. Evaristo was a 2009 winner of an Orange Prize Youth Panel award for Blonde Roots.

The award program is in its 25th year, and in the past has been better known by its sponsors’ names, called at times the Orange and then the Baileys prize. In its current incarnation, the program retains Baileys as a sponsor (joined by Fremantle and NatWest) while sticking to its own name.

Organizers, while eschewing a physical event for today’s shortlist announcement out of regard for safety during the pandemic, are putting forward an optimistic prognosis for the autumn, announcing that it will hold its shortlist readings on September 8 at Southbank Centre, to be followed by an awards ceremony in central London on September 9.

The news of the UK’s battle with the coronavirus COVID-19  shows 18,141 deaths attributed to the pandemic on the Johns Hopkins Coronavirus Resource Center in its 10:38 ET update (1438 GMT, 1538 BST), the total caseload for the country reaching 134,635. A news conference has been called by No. 10 Downing Street with the foreign secretary Dominic Raab continuing to stand in for the convalescing Boris Johnson.

The Women’s Prize for Fiction carries a cash award of £30,000 (US$37,000), anonymously endowed, for a novel written by a woman and published in the UK between April 1 of last year and March 31 of this year. The “Bessie” is also given to the winner, a figurine by Grizel Niven. 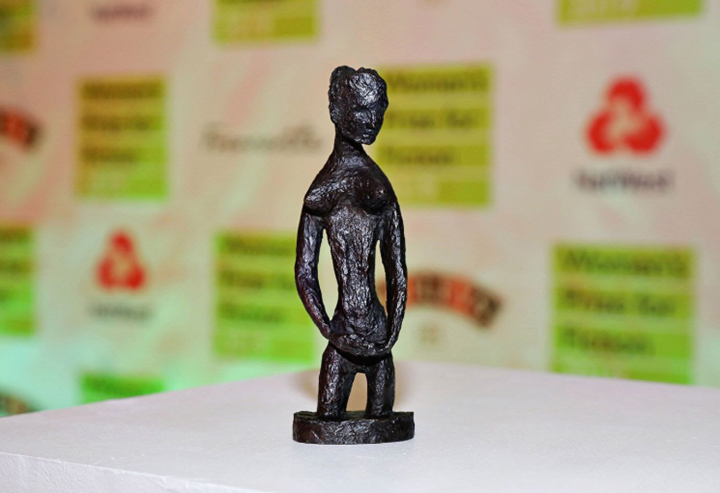 The Grizel Niven bronze ‘Bessie’ is given to the annual winner of the Women’s Prize for Fiction. Image: Women’s Prize

In a prepared statement from the chair of the jury, Martha Lane Fox is quoted, saying, “We’re all living in challenging, sad, and complex times, so incredible stories provide hope, a moment of escape and a point of connection now more than ever.

“Choosing the shortlist was tough—we went slowly and carefully and passions ran high—just as you would want in such a process.

“But we’re all so proud of these books. All readers will find solace if they pick one up.”

Joining Fox on this year’s jury are:

Fox and the program’s Kate Mosse are to provide an online May 6 session about the books and the jury process, via Zoom. Those interested can submit questions to Fox and Mosse in advance at the prize’s site or at @WomensPrize on Twitter.

More from Publishing Perspectives on publishing and book awards is here. And more from us on the coronavirus pandemic is here.