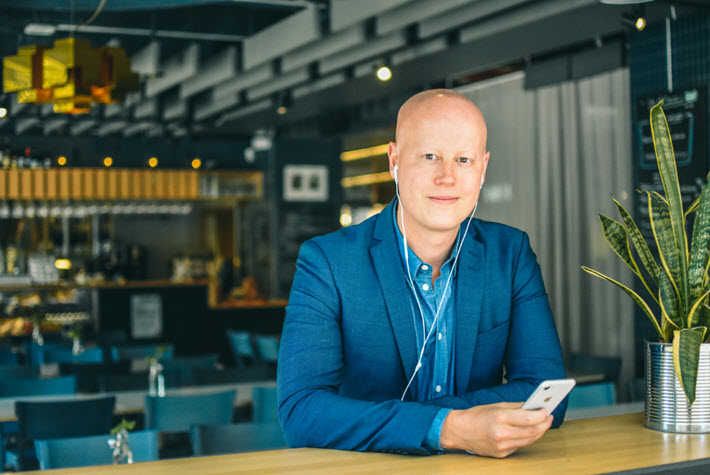 Focused on bestsellers—and the cooperation of its markets’ publishers—Stockholm-based BookBeat is watching the COVID-19 crisis crank up its subscription volume.

The Fourth Most-Downloaded App in Finland

In what many of us refer to as “normal times,” says Niclas Sandin, “the secret of the insane audiobook growth you’ve seen in the last decade in the Nordic markets comes down to premium content that the users are willing to pay for.”

“In Sweden, for instance,” Stockholm’s Sandin says, “we have more than 100,000 books in our catalogue. But 50 percent of all the consumption comes from the 50 most popular authors. Of this, 90 percent of the consumption is in Swedish even though the English catalogue is bigger in size. And we see similar behavior in both Finland and Germany.”

Sandin is CEO of BookBeat, which in these not-at-all normal times is experiencing its highest rates of growth in its history during the coronavirus COVID-19 pandemic. For all the dependability of the kind of content that draws consumers, he’s watching his service’s numbers jump fast.

“So far, about one month into this strange new world,” Niclas tells Publishing Perspectives, “we’ve had the highest number of new users registering with BookBeat ever, since our launch in 2016. The effect has been most apparent in Finland and Germany, which have stricter lockdowns than Sweden.

“In Finland during the last week,” he says, “we’ve actually been the fourth most-downloaded app in the App Store, shadowing communication tools like Microsoft Teams, Google Hangout, and Zoom. This means we’ve already reached 300,000 paying users just a couple of months into 2020 and there’s no sign of the growth slowing down on any of our core markets.”

To broaden the picture of what Sandin is describing, those three core markets—according to the Johns Hopkins Coronavirus Resource Center in its 6:38 a.m. ET update (1038 GMT)—look like this:

The three core markets don’t define the full reach of BookBeat. “We’ve now expanded our offering to 28 European markets,” Sandin says. “Of these. we so far have put most of our focus in Sweden, Finland, and Germany with a localized app and local teams.

“We’ve already reached 300,000 paying users just a couple of months into 2020 and there’s no sign of the growth slowing down on any of our core markets.”Niclas Sandin, BookBeat

“By the end of 2019, four years after our debut, we’d passed 250,000 paying subscribers and had more than €30 million in annual revenue in these three core markets.

“Later in 2020, we’ll add Denmark and Poland to our core markets since they’ve shown a lot of potential and we see room for more players. The other 23 markets are currently in an evaluation phase in which we try to establish the potential to do a broad launch. The key is to make sure that consumer behavior is there and that they’re willing to pay for digital audiobooks.

“And at the same time, we need to see an interest from publishers to produce books for each market so there’s a sustainable ecosystem.”

That’s an important key to success for audio subscriptions, he says. Sandin has learned that waving huge numbers of titles at consumers without being able to purvey the most popular books of the day just won’t work. “They will call your bluff if you pretend to have a wide offering that merely consists of hundreds of thousand titles that almost nobody will ever listen to on that market.

“If you want to fix this, we believe the most rational and sustainable solution is to get local publishers onboard and get them to invest in audio. To achieve that, you have to make sure you offer them transparent and predictable revenue so they benefit as the market starts growing.

“Because of this, our standard offering to publishers is a net-price model instead of the variable-revenue share model many other services seem to push.

“Meaning the key is to get the major publishers in each market onboard. So we focus our efforts where this is a possibility, as in Germany and Poland instead of trying to do it all by ourselves on new markets without the publishers’ backing.”

In-Pandemic: What’s Happening During the Contagion

“In the beginning of March,” Sandin says, “when the world in an instant was turned upside down by the virus, we were at first cautious in our predictions of how it would affect us. As we’re a 100-percent digital service used primarily on smartphones, we knew that the effect on us probably wouldn’t be as severe as if would be for physical bookstores or e-commerce dependent on physical distribution. But we could never have expected what happened from the middle of March when most of Europe went into lockdown. 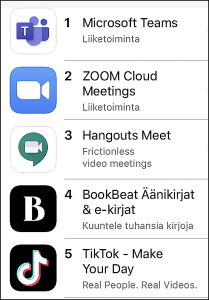 This look at Finland’s Top 5 downloads in the App Store on 16 April during the coronavirus pandemic ranks BookBeat at No. 4. Image: BookBeat

What’s happened, of course, is that tidal wave of new 300,000 new registrations and those profound jumps the BookBeat app is making during the “Zoom pandemic.”

So far, about one month into this strange new world we have had the highest number of new users registering to BookBeat ever since we launched in 2016. The effect has been most apparent in Finland and Germany who have stricter lockdowns than Sweden. In Finland we actually during the last week have been the fourth most downloaded app in App Store shadowing communication tools like Microsoft Teams, Google Hangout and Zoom. This means that we have already reached 300 000 paying users just a couple months into 2020 and there is no sign of the growth slowing down on any of our core markets.

“In a way it’s reassuring,” he says, “to see that the demand for books and great stories isn’t suppressed in these troubled times. It’s actually something many people turn to during all the time they spend at home.

“Last time I looked,  the seven Harry Potter books had all reached the Top 10 list of our most listened-to titles during the first two weeks of April. I guess people, both young and old, need other stories in their life than just the continuous news flow right now, and what could be better than bingeing through 100 hours about the world’s most famous wizard?”

As yet, Sandin says, the company has been able to handle the ballooning demand technically. “We’ve been warned, since we use Microsoft Azure as our cloud service and we share traffic with, for instance, Microsoft Teams,” he says, that load could be an issue. “I guess the reason why it hasn’t been a problem so far is that an audiobook demands a lot less traffic than, say, digital video streaming.” 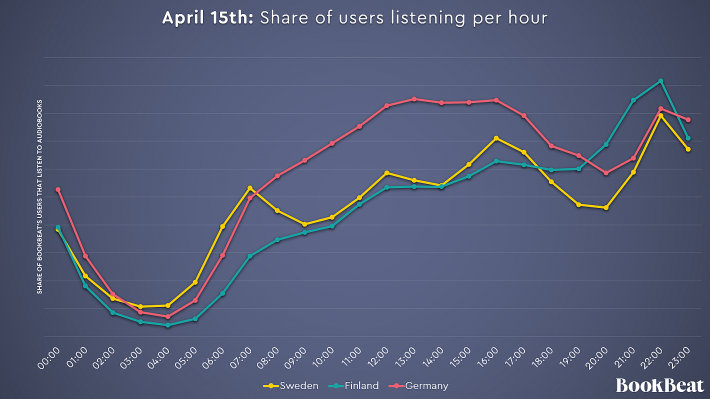 In this graphic, BookBeat’s audiobook consumer listening patterns are charted for the company’s prime markets: Sweden, Finland, and Germany at mid-week after Easter 2020. CEO Niclas Sandin points out that both the German and Finnish daypart patterns have smoothed more during the coronavirus pandemic more than the corresponding patterns in Sweden—where social distancing restrictions are less severe and standard daily routines thus remain more fully intact. Image: BookBeat

It’s in consumer behavior that Sandin is seeing the starkest evidence of what’s going on at ground level. As Publishing Perspectives readers know, one of the great gifts of streaming digital products is usage data.

“We actually had the highest listening hours ever for BookBeat on the Monday after the Easter weekend.”Niclas Sandin, BookBeat

“And the big shift we see,” Sandin says, “is that we’ve lost the commuter peaks. “They’ve been replaced by more listening at other times during the day.

“Overall, the average listening levels are the same and in some markets even higher than before. We actually had the highest listening hours ever for BookBeat on the Monday after the Easter weekend.”

Many observers of audio consumer behavior will be watching just these trends—more subscribers, fewer peaks and valleys during a day, not least because the podcast market seems to be taking some shifts.

Nicholas Quah—who spoke at the 2019 Audio Publishers Association conference during BookExpo—has been documenting, for example, in his NiemanLab columns, the way the disappearance of the morning commute in much of the American market during pandemic restrictions is hurting podcasts.

And that trend is something that publishing people need to keep an eye on because many have thought that producing new and more podcasts could be a good digital answer to the downturn in physical sales. That response, it turns out, may not generate the activity hoped, if podcast consumption is indeed being slowed by the loss of standard go-to moments of the day for that format.

More from Publishing Perspectives on audiobooks is here. And more from us on the coronavirus pandemic is here.