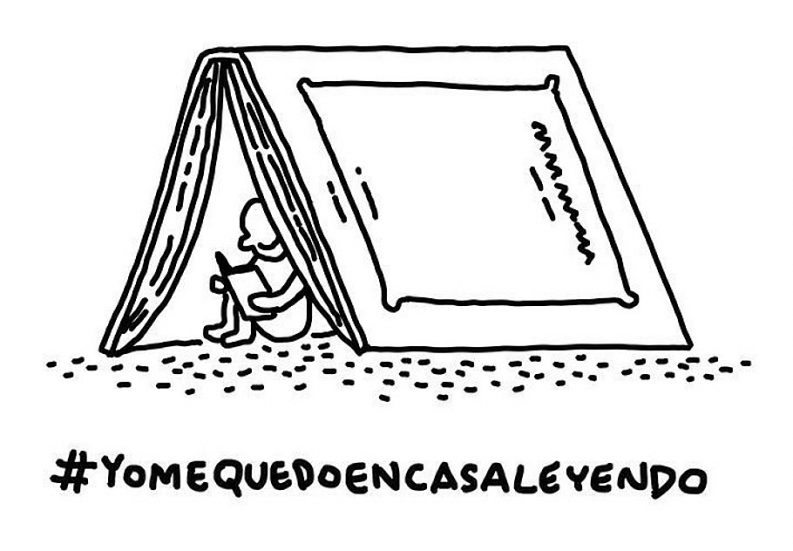 While some skepticism has greeted Penguin Random House’s discount-and-coupon offers on print copies, others see a useful exercise in D2C sales for the trade publisher in the shuttered Spanish market. 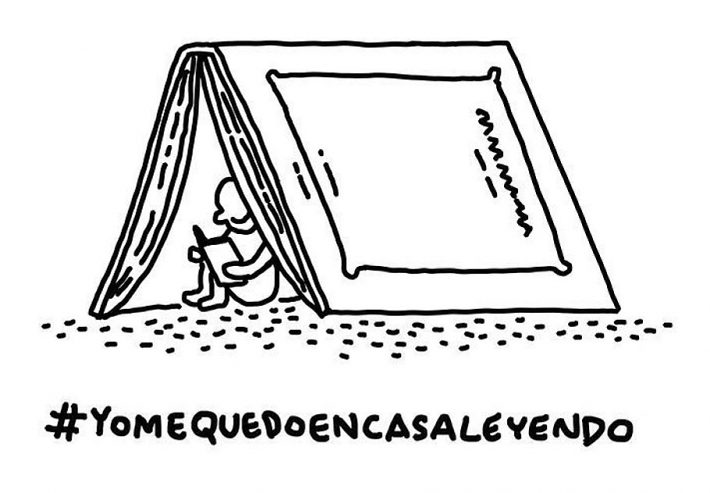 When a consumer buys a book at Grupo Editorial’s online store, megustaleer.com, 10 percent of the sale is reimbursed as a coupon. The consumer then can use that coupon when buying a print book in a physical bookstore after the public health emergency restrictions on business are lifted.

More on this initiative can be found on social media under the hashtags #YoApoyoALasLibrerías (#ISupportBookstores) and #YoMeQuedoEnCasaLeyendo (#IStayHomeReading), both internationally valuable declarations at this point.

Spain is second only to the United States now in its coronavirus caseload, having passed even Italy to tally 146,690 confirmed cases and 14,673 deaths, in the 1:01 p.m. ET update of the Johns Hopkins Coronavirus Resource Center (1701 GMT).

“All bookstores in Spain have been closed for four weeks,” Celaya says, “and they are expected to be closed for at least another two weeks,” the Spanish prime minister, Pedro Sanchez, having announced another two-week extension of the country’s lockdown, to April 25.

“The closure of the bookstores,” Celaya says, “may result in a loss of a third of the Spanish publishing sector’s revenues this year—a €3 billion euro industry (US$3.3 billion) before the COVID crisis. The national Spanish Publishers Association has estimated we’ll see a loss of €250 million euros per quarter (US$271.6 million) because of the quarantine in the follow-up economic crisis we’re going to suffer through the rest of the year.”

As Celaya tells it, though, there’s been some controversy around the program, some fearing that the program was actually using the temporary falloff of print sales “to test the effectiveness, resources needed, and revenue derived from a direct-sales platform.” These misgivings were driven in part by the fact that PRH’s sales pages directed customers for print sales to the primary retail platforms—Amazon.es, FNAC, Casa del Libro, Corte Inglés, and others.

“In my view,” Celaya says, “this is not the primary objective for launching this initiative” for the bookstores. “Direct sales channels normally don’t represent more than 15 to 20 percent of the total revenues for most trade publishers, in the best-case scenarios. Academic or very niche, specialized publishers might have a higher return on their D2C  platforms, but most trade publishers heavily depend on the retail channels because of their audiences and clientele.”

What publishers gain from their direct sales, of course, is data, insights into consumer behavior, as well as cultivation of the market, he points out, which makes an e-commerce site worthwhile. “The business intelligence derived from direct channels are very strategic information for publishers in the digital age.

“Data such as day and hour of purchase, ZIP or postal codes that spend the most money, cities’ reading affinities, numbers of books purchased per month, categories most visited, titles allocated in their wishlists, price campaigns’ effectiveness” are among the kinds of data publishers gain through direct sales online, and this isn’t the kind of information that major retailers including Amazon, Apple, and Google readily share.

So Celaya sees in PRH’s effort in the Spanish market as a useful test run.

And one way that PRH Grupo Editorial is working to allay concerns is by adding buy buttons for the Megustaleer site to its books’ sales pages, with a note that offers that 10-percent advantage to support bookstores. This is intended to drive print sales to the bookstore-friendly effort over the other retailers’ platforms. 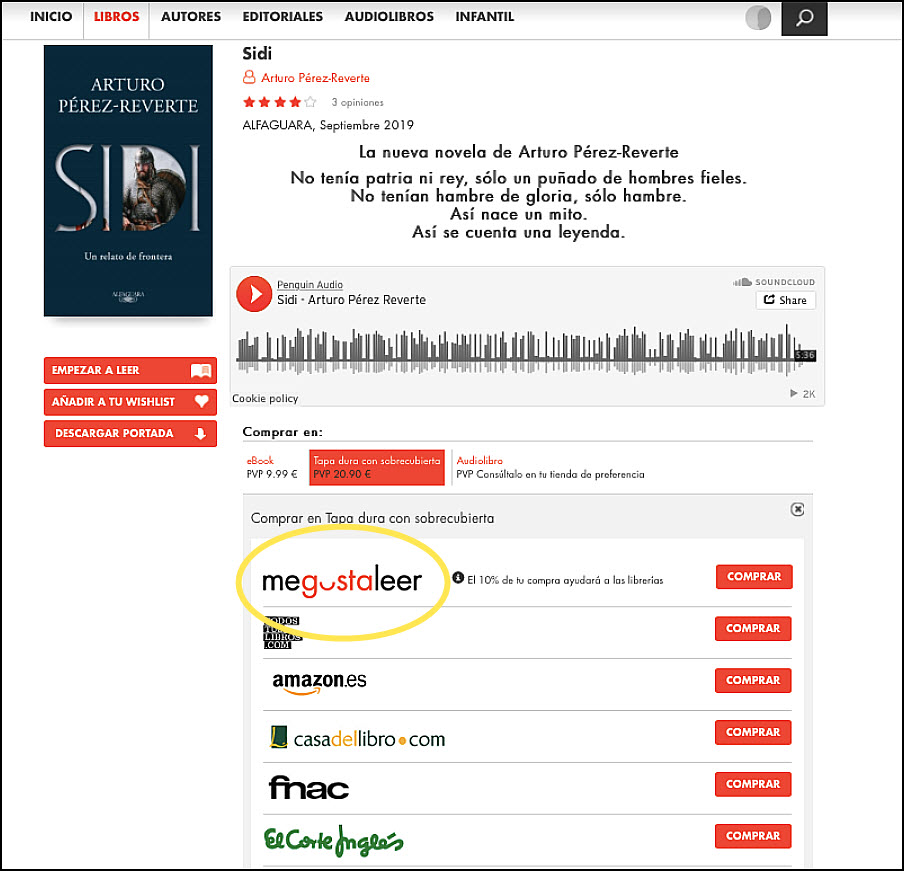 For digital sales (audiobooks and ebooks), you see the same book’s sales page at PRH without the megustaleer offer, as the effort of the company’s own e-commerce site is meant to build sales for physical bookstores. 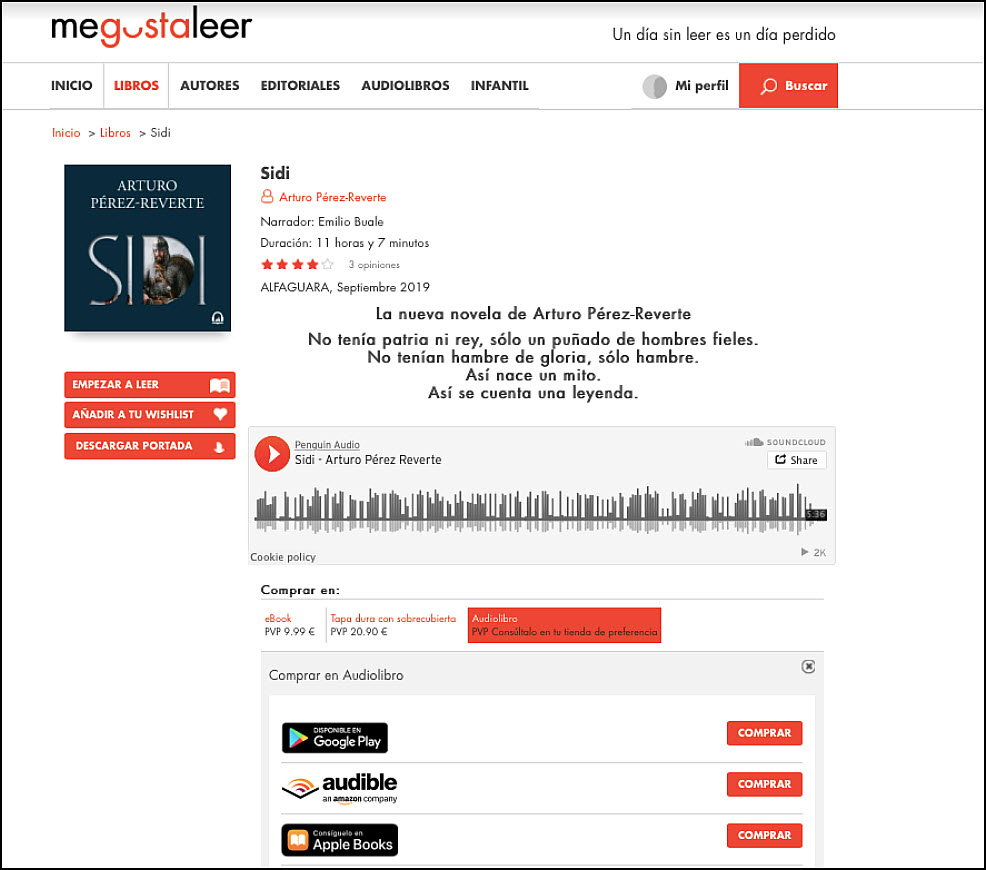 Celaya predicts that more Spanish and Latin American publishers are going to see and replicate what PRH Grupo Editorial is doing in this bookstore-supportive approach—which indeed can come with new data on consumer action.

So as he sees it, the exercise is a good one not only for the bookshops and the business on the other side of the pandemic’s peak but also for working through what’s discovered in direct-sales by trade houses. 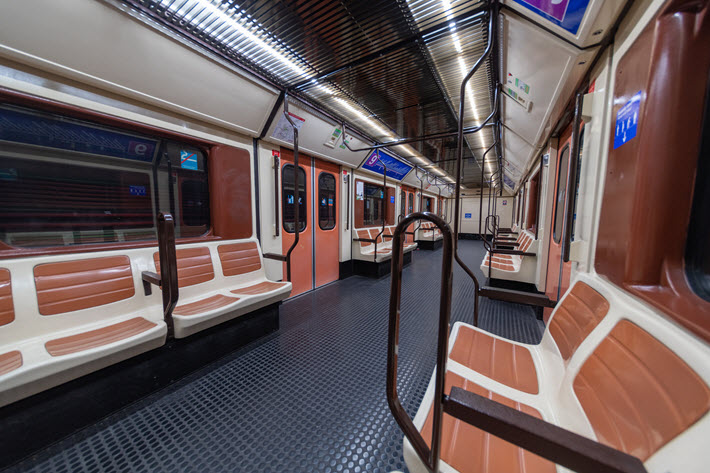 More from Publishing Perspectives on Spain’s market is here, and more on bookselling is here. More from us on the coronavirus pandemic is here.