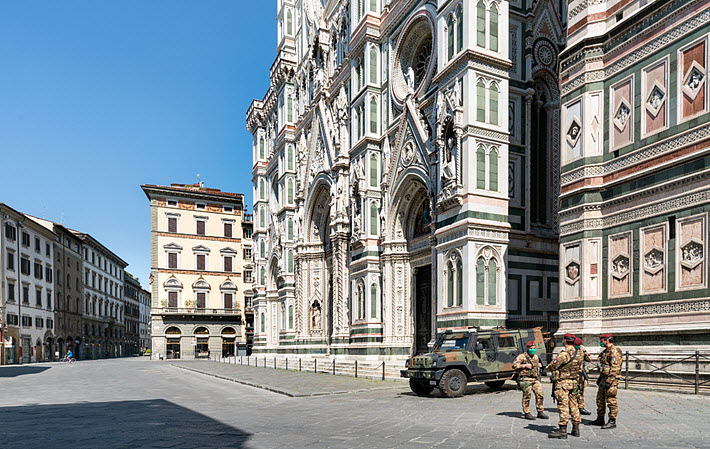 Having taken a major stake in the UK-based Quarto Group, Florence’s Giunti Editore is ‘doing everything possible’ to give its workers a safe return to their offices, as Italy begins easing the nationwide lockdown.

An April 9 shot of a military guard at the cathedral of Santa Maria del Fiore in Florence, where Giunti is headquartered. Image – iStockphoto: McPhotostock

Editor’s note: As the BBC’ reports today (April 27), the Giuseppe Conte government starts a “phase two” easing of its seven-week lockdown on May 4. By this weekend, Giunti Editore says it had opened 40 of its 230 bookstores. With the world caseload near 3 million, the Johns Hopkins Coronavirus Resource Center reports 197,675 cases in Italy in its 6:31 a.m. ET update (1031 GMT). Italy has seen 16,644 deaths in the coronavirus COVID-19 pandemic. —Porter Anderson

“We had to adapt our way of working very rapidly,” says Montanarini.

“Now more than 90 percent of our people are working from their own houses and for all the meetings, we’re using digital platforms. The virus emergency expanded in Italy really suddenly, without any possibility of previous arrangements, because our country was the first one to be affected in Europe. So we had to switch to this new way of working in a few days, and it was quite challenging.”

Giunti is widely diversified in publishing. “We publish books for children,” Montanarini says, “with brands including Dami, Disney, Editoriale Scienza, Pon Pon, Del Borgo, and Fatatrac. We have illustrated books in our imprints Giunti, Demetra, and De Vecchi, fiction and nonfiction at Giunti and Bompiani. We’re leaders in the school market and we also publish some magazines.

That sheer range of activity has generated its own complications. “Using smart working  extensively is not a big issue for some positions,” Montanarini says. “Some people can work just as productivity [from hone] as in the office. But for others, it’s very difficult if not impossible. We had to arrange in a very short time a way to provide our people the ability to work on the company’s software systems directly from their homes.”

With its domestic distribution involving some 100 players, the company also operates “logistics facilities and our own chain of bookshops, Giunti al Punto, now with 230 points of sale. We also manage ticket sales and bookshops in many of Italy’s main museums.”

The impact to every aspect of the book business supply chain is hard to describe fully. The Italian publishers association (Associazione Italiana Editori, AIE) now tells Publishing Perspectives that at least 31 percent of activity planned by publishers for 2020 has been lost. Some 64 percent of publishers had begun or were planning layoffs by the end of March. The ramifying implications of this are deep, with what the association describes as “serious consequences for employment in the paper, printing, and publishing services and graphics, as well as for authors and translators ”

Led by Ricardo Franco Levi, the association and its sister organizations in journalism, libraries, and the other creative industries, have made repeated and strident appeals to Rome for emergency assistance.

And yet, as is the case in many world markets, despite the profound disruption of sales and production channels, many elements of a publisher’s daily performances can go forward under lockdown conditions.

“For most of our tasks,” Montanarini says, “the productivity level compared to our traditional way of working is still high. Our company organizes the work in teams, though, and this is more difficult to manage at a distance.

“At the beginning, many of our employees were happy to have more time with their families and they were afraid to come to work in the offices because of the high risk of being infected with the virus. But after almost two months of enforced quarantine, I imagine they’d now rather go back to the offices.”

Reporting few problems with internal company communications during the lockdown, Montanarini says that the company would like to see its retail operations “gradually going back to a ‘normal’ situation,” in accordance with the Conte administration’s easing program.

And that means, to some degree, the workforce returning to the company’s offices.

“We are working a lot at this point,” Montanarini says, “to do everything possible to ensure a completely safe return of our colleagues to their offices. Our company has adopted very strict protocols about safety.”

“Now that the number of infected people is going down, the worries about the economic crisis are emerging more and more. “Martino Montanarini, Giunti Editore

Emotionally, he says, he can detect a shift from the initial health concern to the financial problems ahead.

“In the first stage,” Montanarini says, “most of our people were very stressed by the risk of being infected with the virus. Now that the number of infected people is going down, the worries about the economic crisis are emerging more and more. Everybody is aware that we’ll all have to face it. Most of our people would like to go back at work as soon as possible.”

As it turns out, the necessity of emphasizing digital retail generated benefits that may have some staying power, he says.

During the pandemic, with the company’s physical bookstores closed for two months, “The only open channels were e-commerce,” he says. “Our digital side—ebooks and audiobooks—have grown a lot and we’ve considerably increased our business through social networks and digital communications.

“We’ll continue to invest in these areas more and more in the future after this positive experience, as our markets reopen.” 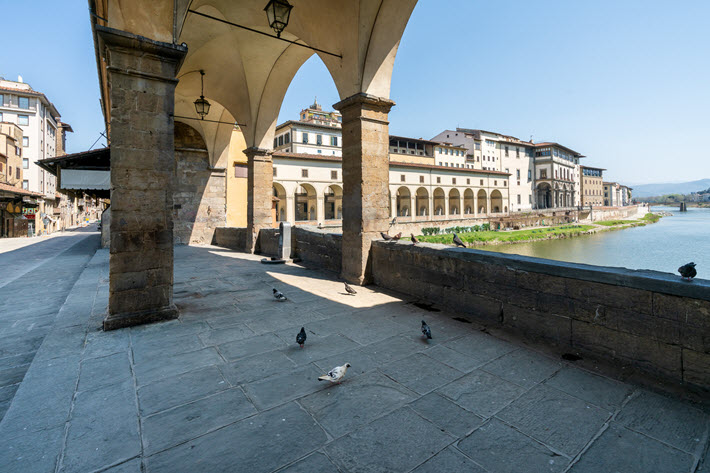 At the Ponte Vecchio over the Arno in Florence, April 16. Image – iStockphoto: McPhotostock

Giunti earlier this year opened a new foothold in another leading market struggling with the coronavirus, the United Kingdom. The company took a 20-percent stake in the UK’s Quarto Group, which also this year put Polly Powell, formerly with Pavilion Books, into place as its latest CEO.

The UK’s Boris Johnson has only today returned to No. 10 Downing Street to reassume the government’s lead—after his own serious bout with the virus that kept him in intensive care for days. The BBC’s new report this morning quotes him calling the current moment one of “maximum risk” in the outbreak and warning the British people not to lose patience with the restrictions of the country’s rather belatedly applied stay-at-home orders.

With Johnson saying he thinks the market is passing through its peak of the pathogen’s outbreak, the UK, with its population of 67 million—not much larger than Italy—has surpassed its fatality count, the Johns Hopkins tallies giving it 20,795 deaths.

Asked about the potential benefits of the latest takeover for the publishing house’s global activities, Andrea Giunti Lombardo, a member of the Giunti Group’s management board and a non-executive director of Quarto Group, tells Publishing Perspectives that raising Giunti’s profile in the UK market could create a number of synergies for the Italian group.

“We believe the opportunities are huge,” Lombardo says, “and that there are different growth areas. 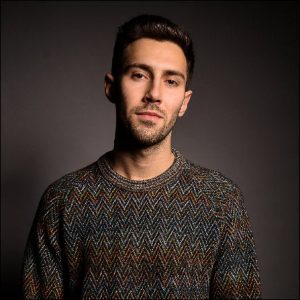 “As English becomes the main common language of the world, we believe that stepping into the global English-language book market is key to the future development of our publishing house.

“Quarto is a leader in illustrated book publishing and has a strong global presence creating and selling books in more than 50 countries and 40 languages. It focuses in the UK and US markets as well as having a very strong foreign rights sales team.

“Therefore, there will be many synergies in sharing experiences and know-how,” Lombardo says, “creating content together, distributing our content worldwide and also selling Quarto products all over the world–not just in the UK and United States but also in Europe and with a strong focus on south east Asia.”

At the end of March, Quarto posted an update to its 2019 results, as reported by The Bookseller’s Katherine Cowdrey, “saying it expects revenues to slip 9 percent to US$135.8 million” compared to 2018’s $149.3 million, “but will be returning a profit of $2.9 million.

“However,” Cowdrey wrote, “the company is putting into place immediate cost-saving measures as a result of the COVID-19 pandemic, including reducing its output of books and a voluntary four-day week for all staff.”

At the time of that report, Powell was quoted speaking optimistically of the new participation of Giunti, saying, “Giunti became a major shareholder in the company which offers the opportunity for greater global reach for both companies when the world returns to some kind of normality.” 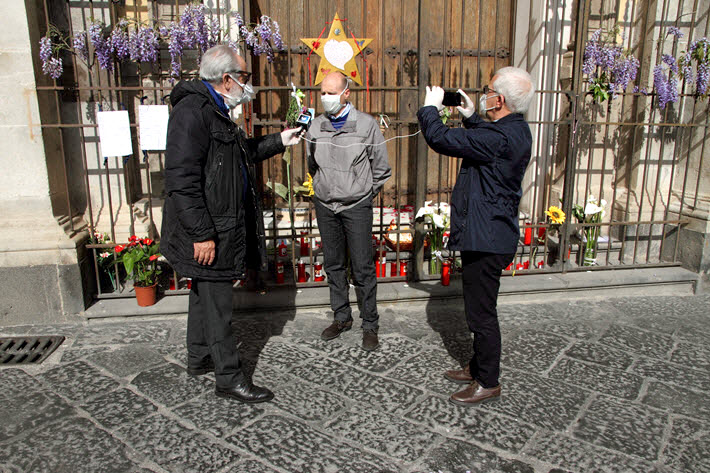 In a shot from April 19, local journalists interview the prior of the Brotherhood of the Madonna delle Galline at the gates of its closed sanctuary in Pagani. Image – iStockphoto: Pasquale Senatore