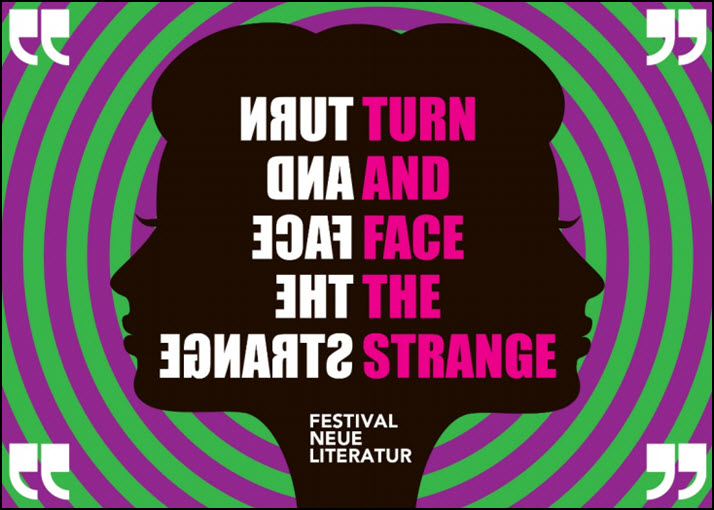 The translations of German literary works commissioned as part of this year’s Festival Neue Literatur are available online, even as the 2020 event is canceled. 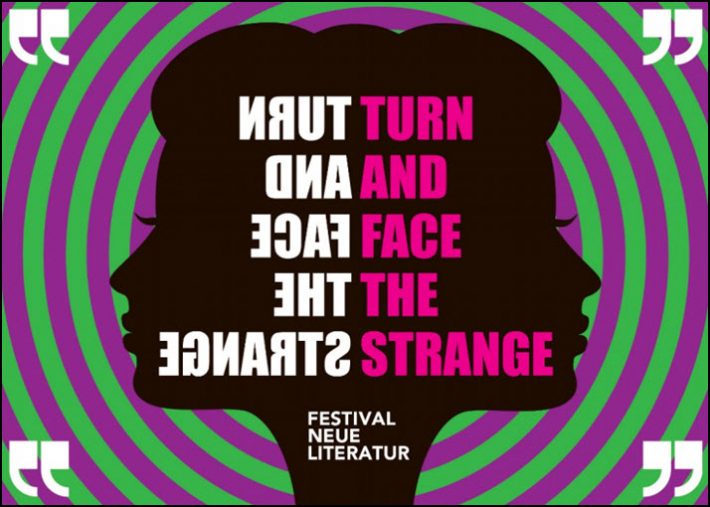 Artwork for New York City’s now canceled 11th annual Festival Neue Literatur, the theme of which was a prescient ‘Turn and Face the Strange’

Theme: ‘Turn and Face the Strange’

The latest presentation change announced by an internationally focused States-based annual event in the books business comes to us today (April 8), as New York City’s Festival Neue Literatur “postpones” its 2020 program to next year. Its anticipated dates had been April 23 to 26.

The verb postponed is being used carefully. Technically, this year’s festival as an event is canceled, as organizers do say in their media messaging. But they’re opting for the “postponement” language because translations which—as Publishing Perspectives know are always part of the programming—are being made available on the site.

You can find the 11th annual program’s translations here, in a PDF compilation that reflects this year’s intended theme, “Turn and Face the Strange.” It might seem that reality has caught up with that phrasing.

Dates for an event in 2021 are not yet being named. 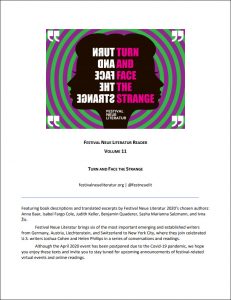 This year’s Friedrich Ulfers Prize, as our readers know, is normally presented as a curtain-raising event to the Festival Neue Literatur. This year it was to be awarded to Jill Schoolman, publisher of Archipelago Books, during the opening night of Festival Neue Literatur on April 23. That event is also postponed. The prize is endowed with a US$5,000 grant and honors a publisher, writer, critic, translator, or scholar who has championed the advancement of German-language literature in the United States. Previous recipients of the Friedrich Ulfers Prize include Susan Bernofsky, Barbara Perlmutter, Barbara Epler, Burton Pike, Robert Weil, Sara Bershtel, and the late Carol Brown Janeway.

Explanations for such cancelations, of course, are no longer needed. Festival Neue Literatur, after all, is a very New York-specific event and the city, of course, is in what many pray is the height of its battle with the pathogen.

At this writing, the Johns Hopkins Coronavirus Resource Center cites 401,166 cases of the coronavirus COVID-19 in the United States, and 12,936 deaths. New York City alone, as the current world epicenter of the pandemic, has 4,009 deaths, and Long Island’s death tolls have made sharp, recent upticks to an even 500 deaths at this point. These figures are from Johns Hopkins’ 11:50 a.m. ET update (1511 GMT).

The governor of New York, Andrew Cuomo (D) has announced at this hour that he’ll have the state’s flags fly at half-staff in honor of the statewide losses of life, including those of New York City. The state’s total is now 5,489 deaths.

The works featured in this year’s festival, according to organizers, “explore the strangeness, uncanniness, and eeriness that sometimes lurks just beneath the surface of daily life and can break out full force in times of change—whether large or small, internal or external, real or imagined, spatial or temporal.”

Included in the narratives are “out-of-body experiences, the loneliness of a con-man in a tiny country, a lost twin, time travel in and out of complicated pasts and no less complicated presents, poisonous bees, a miracle or two, deer-headed intruders, along with a series of far-fetched women—and then things get really strange.”

More from Publishing Perspectives on Festival Neue Literatur is here. And more from us on the coronavirus pandemic is here.