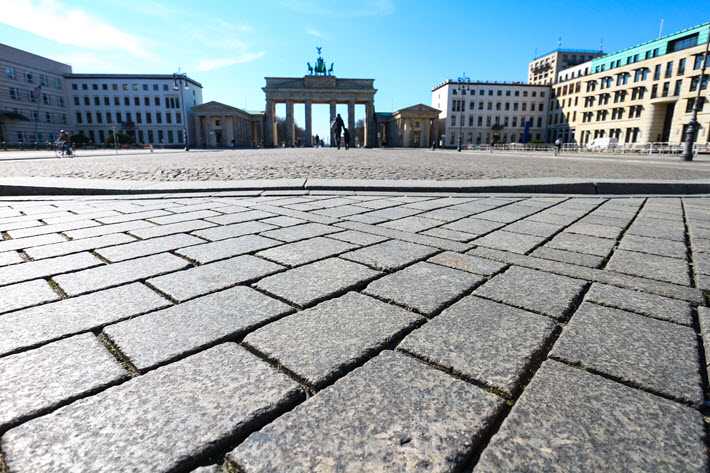 In Germany, a prize never yet awarded is canceled, as ALTA’s program of American translation awards adjusts deadlines, and a UK program for independent writer announces its prizes online. 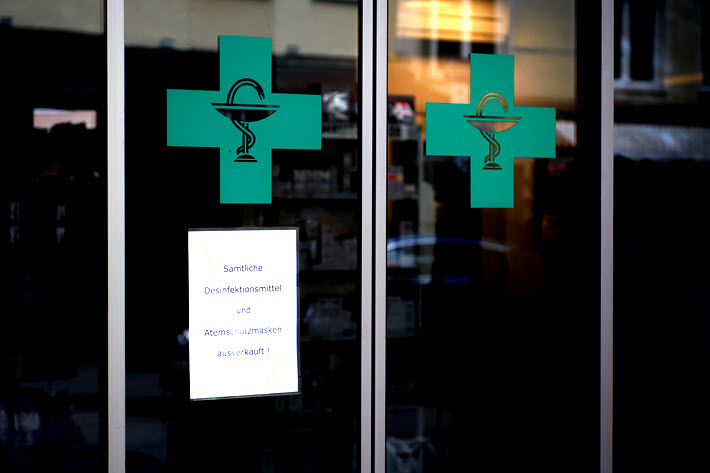 At a pharmacy in Munich, a note on the door announces a shortage of hand sanitizer and face masks. Image – iStockphoto: Anne-Laure Affre

Disruption and Delays Amid Danger

Normally at this time of year, news stories about awards programs’ longlists, shortlists, and prize ceremonies coat the world publishing industry like a heavy pollen. Particularly because those seals on book covers—”winner of,” “shortlisted for,” “longlisted by”—are thought to boost sales, the international book industry is deeply devoted to its award programs.

On Thursday (April 2), the UK’s  Booker International Prize shortlist is to be announced in London at midday BST without a physical event. (Publishing Perspectives will have coverage.

This year, of course, as world publishing is driven necessarily by the pathogen-spread of the coronavirus COVID-19 pandemic, the awards and event stories are about changes: cancellations, postponements, digital renderings of events. As announcements arrive, you see a certain preference for euphemism, too. Many programs speak of “this time of uncertainty,” when in fact it’s really very certain that this is a time of palpable danger.

The presence of the contagion is now registered in at least 171 nations.

The 10 countries in the most acute lineup of exposure—among them several of the world’s foremost book business markets—are sorting out this way, in descending order of numbers of confirmed cases:

And we’ll start our list of coronavirus-prompted recent adjustments with a major prize program that’s especially compelling at this point—because it has yet to be awarded even once.

As you may recall from Publishing Perspectives’ coverage, the Börsenverein des Deutschen Buchhandels—Germany’s publishers and booksellers association—announced a very promising new prize program in May last year.

While the German Book Prize, also administered by the Börsenverein, has long stood as the preeminent award for German-language literature, it’s a program that honors novels.

The new program for nonfiction, carrying a total purse of €42,500 (US$46,468), is intended to place its emphasis on current affairs. In a prepared statement, the organizers’ media messaging reads, “With the German Nonfiction Prize, the Börsenverein des Deutschen Buchhandels aims to promote awareness of nonfiction as a basis for transmitting knowledge, developing informed opinions and encouraging public discourse.”

New messaging now from the Börsenverein’s offices in Frankfurt reads, “The German Nonfiction Prize will not be awarded this year due to uncertainty regarding developments concerning coronavirus.

“This decision was taken by the board of the Stiftung Buchkultur und Leseförderung des Börsenvereins des Deutschen Buchhandels (the Foundation for Book Culture and the Promotion of Reading of the German Publishers and Booksellers Association) after consultation with the board of the Börsenverein.

“Consequently, the German Non-Fiction Prize will be awarded for the first time in 2021.”

In a comment, Karin Schmidt-Friderichs, Börsenverein president, is quoted, saying, “Containing the coronavirus presents an enormous challenge for society as a whole. The associated uncertainty and constantly changing circumstances make it impossible to plan reliably, so that we cannot guarantee the proper selection and awarding of the German Nonfiction Prize this year. We very much regret not being able to honor this year’s best nonfiction book and already look forward to the German Nonfiction Prize 2021, to the nominated titles, and a wide range of debates around socially relevant topics.”

No mention is made in the announcement of the 240 submissions the program had received from 152 publishers. Of those houses submitting, 124 are in Germany, 13 are in Austria, and 15 are Swiss publishers in the German language.

While Johns Hopkins sees 72,383 confirmed coronavirus cases in Germany today, the country  has listed only 802 deaths. This does represent a recent quickening in fatalities, and yet overall, Germany is credited with having started testing for COVID-19 in mid-February–and for creating the first test for the virus. This has so far kept the country’s hospitalization levels low, to the degree that Germany is helping France with patients, especially from the Grand Est, who are caught in the French health system’s struggle with demand.

Kudos to the American Literary Translators Association for calling this a “trying” time rather than an “uncertain” time. We can all confirm that the time is trying without any fear of uncertainty.

Submission deadlines for the organization’s annual translation prizes are being moved from April 20 to May 4.

“Please note that submissions are only accepted through our submittable portal. The deadline for awards submissions is now May 4 at 11:59pm PT.”

Note that there’s a welcome internationalist trend going on in the program’s poetry and prose honors: “A reminder that as of the 2020 awards cycle, the National Translation Awards in poetry and prose, previously only open to translators with United States citizenship or residency, are now open to all translators working into English.”

This is a program that offers five forms of award:

More about ALTA’s awards is here.

The United States, at this writing, is tallied at 189,633 cases by Johns Hopkins, and 4,090 deaths. As confirmed yesterday by the White House coronavirus task force, should mitigation efforts in the States succeed—and this is a problem because all state jurisdictions are not locked down—models indicate that the US death totals may fall between 100,000 and 240,000.

Originally scheduled to be announced at the (canceled) London Book Fair, prize ceremony for The Selfies program in London was moved to an online event and hosted by Jo Henry—formerly of Nielsen, now with BookBrunch—on Zoom.

The winner of the adult category was Clare Flynn in historical romance for  The Pearl of Penang, while Jemma Hatt won the children’s prize–given this year for the first time–with a middle-grade book, The Adventurers and the Cursed Castle.

The winner in both categories receives a prize of £1,000 (US$1,241) and a copy of Scott Pack’s Tips from a Publisher. Pack is an associate editor with the UK’s crowd-funded Unbound.

The Selfies are, of course, an award for self-publishing work. Jurors for this year’s competition included Pack as well as IngramSpark’s Robin Cutler, and BookBrunch’s Henry for the adult award. For the children’s award, jurors were Jill Coleman, Ken Wilson-Max, and Meera Ghanshamdas.

The UK at this writing, reports 25,504 cases and 1,793 deaths. The ExCel Center in London, a large convention center, is being outfitted to handle some 4,000 patients as the full surge of anticipated contagion victims approaches.

As a part of the online event, Cutler confirmed that Ingram is operational at the moment, despite the pandemic.

While based in Nashville, Tennessee, the Ingram Content Group, of course, is in the UK and Australia with its operations and when Nashville went into a 14-day lockdown on March 2e, Ingram’s “warehousing and storage, distribution, logistics, and delivery operations will remain open,” according to the distributor’s March 22 statement.

Ingram president and CEO Shawn Morin is quoted in the statement, saying, “We are monitoring all global geographies where we do business for announcements regarding COVID-19 and are adjusting our business accordingly. At this time, we can report that all our facilities and distribution centers, around the world, remain open. Ingram Content Group continues to take actions to support the health and safety of all our associates.”

More from Publishing Perspectives on the coronavirus outbreak is here. More from us on publishing and book awards programs is here.