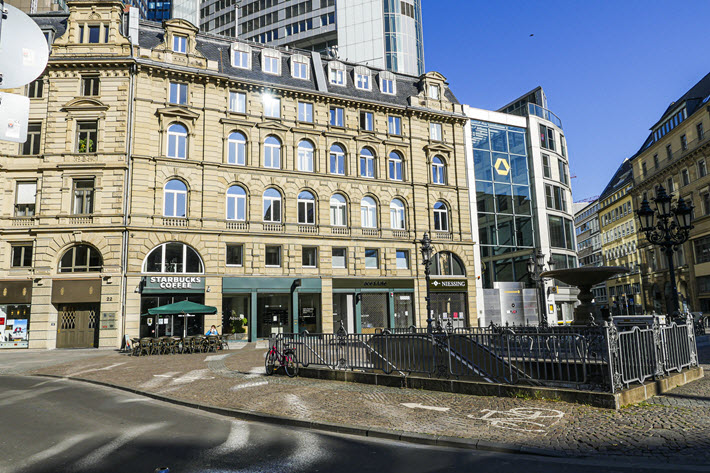 Exemplary among many markets for its early testing and distancing regulations, Germany looks to allow bookstores to begin reopening on Monday (April 20).

While some in the world publishing industry want to classify this as “happy news,” many in public health and other sectors are watching with respectful concern, perhaps alarm, as Germany announces that it will follow Italy in in easing pandemic restrictions on certain retail settings.

As Publishing Perspectives reported Wednesday (April 15) Italian bookstores in certain regions can open their physical stores, allowing one customer into a store at a time. Needless to say, this sort of opening can’t support a staff—probably no more than a single bookseller—and even then may not generate enough revenue to justify the hazard pay anyone asked to work in such a setting should be given.

And while everyone in book publishing, obviously, would welcome a return to the operation of physical bookstore retail sites, of course, the price could be terrible for a mistake in when and how a back-to-business attempt is made.

As Holly Ellyatt is reporting today (April 16) for CNBC, “An increasing number of European countries have cautiously started to ease restrictive measures on public life and businesses this week, and Germany is the latest to set out a road map for how it will reopen its economy. Smaller shops will be able to start reopening on April 20 and schools will reopen on May 4. Mass gatherings have been banned until Aug. 31, however.”

A smaller shop is considered one with an area of up to 800 square meters (8,611 square feet), and, as Börsenblatt’s report from Wednesday points out, there’s no space limit placed on bookstores. The opportunity to open begins on Monday (April 20).

All this was revealed in a news conference led by the German chancellor, Angela Merkel, on Wednesday in which she and her colleagues worked to make it clear that the regulations of social distancing are not lifted, including a “strong recommendation” for everyone to wear masks for shopping and public transport. As she’s quoted by the Börsenblatt saying, “We are walking on thin ice.”

And indeed, Merkel has announced, there can be no crowd events in Germany until, at the earliest, August 31. 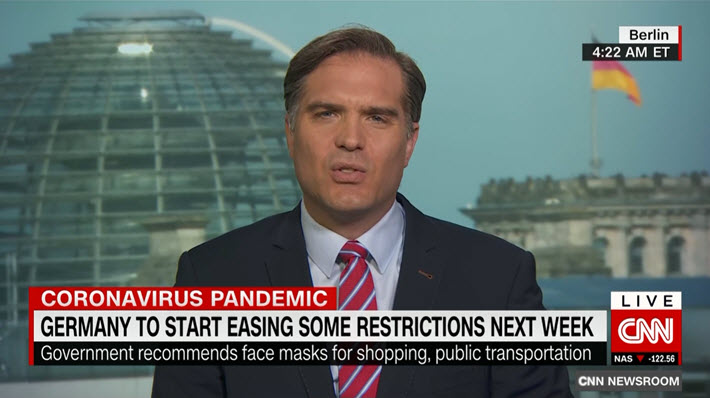 In his reports from Berlin this morning, CNN’s Fred Pleitgen is making the point that the German population can be expected to respond properly to a “strong recommendation” for face coverings because they simply have taken their government’s distancing regime seriously, while in other nations, of course, citizens have responded far less reliably to such directives.

Distancing requirements in Germany, Pleitgen says, require that no more than two people can physically meet. “That is going to remain in place,” he says, making it appear that retail operations will be carefully arranged to stay within such limitations, perhaps like the Italian model of one consumer in a store at a time.

There’s an allowance being made, too, for some school activity, with exam preparations being readied, and some levels of school openings thought to be possible May 4.

“But Angela Merkel said,” Pleitgen reports, “that this is something very, very fragile and can still go wrong at any point. German scientists created the first Western test for the novel coronavirus and used extensive testing early on to identify and contain potential problems, keeping its death count relatively low.

“But Merkel, who is a physicist by training, Pleitgen adds, “also said that right now, they have a situation in Germany in which one person who has the coronavirus usually infects one other person. And that’s where they want to be right now. She said that if that moves to one person infecting 1.1 people, they could have a collapse of the German health care system, which is a very good one, in the not too distant future.

“Discipline, she says, is still very important. And the gains Germany has made are still very fragile.”

Pleitgen goes on to draw parallels between the situation in Germany and that in the United States, writing, “Federalism is as entrenched in Germany as it is in the United States. The chancellor in Berlin cannot force the governors of the nation’s 16 states to enforce social distancing measures, temporarily close restaurants and cafes, or shut down schools and universities.”

He adds that both markets are also “in the run-up to a landmark election.”

‘When Hospitals Can Cope’ 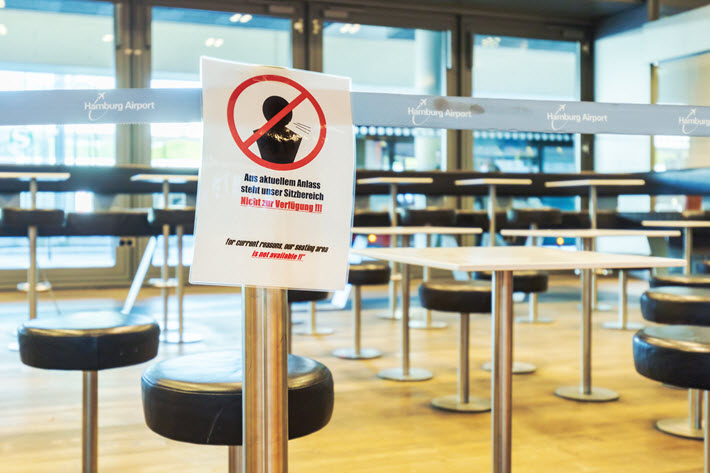 At Hamburg Airport on March 29, a sign notifies passengers that seating is not available. Image – iStockphoto: Carol Anne

The MarketWatch use of an Associated Press wire on Wednesday, writes of how wary many in the European Union structure are about efforts to ease restrictions at this point, reporting, “The European Union moved Wednesday to head off a chaotic and potentially disastrous easing of restrictions that are limiting the spread of the coronavirus, warning its 27 nations to move very cautiously as they return to normal life and base their actions on scientific advice.”

Austria, the Czech Republic, and Denmark have begun lifting some lockdown restrictions, while the European Centre for Disease Prevention and Control reports that roughly 80,000 people in Europe are known to have died, to date, of the coronavirus COVID-19.

The news service reports, “In a draft of its roadmap, seen by the Associated Press, the EU commission says easing restrictions will ‘unavoidably lead to a corresponding increase in new cases.’ It warns that this should only happen when the spread of the disease has dropped for some time and when hospitals can cope with more patients.”

The European Commission is working to circulate quickly its roadmap for member-states on reopening plans, for fear of catastrophic backslides in viral activity amid a patchwork of uncoordinated reopening efforts in the union. 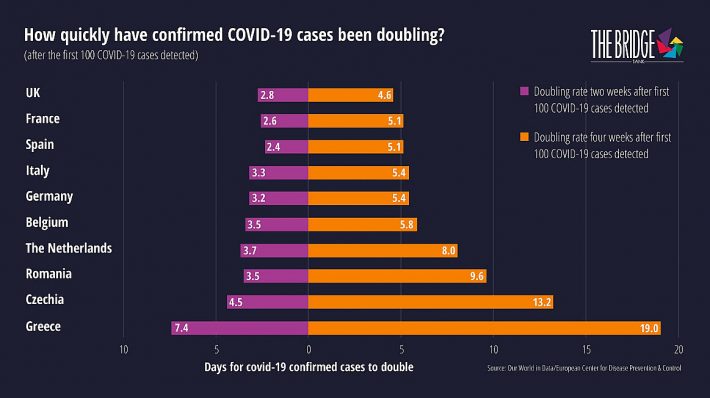 And Wednesday’s release by the Bridge Tank—an independent economic think tank founded by France’s Joel Ruet has—a particularly informative graphic plots the speed with which COVID-19 cases have been doubling in Europe and the UK. 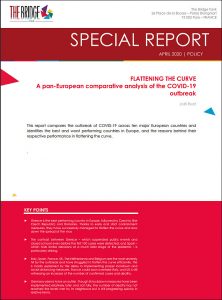 “Italy, Spain, France, the UK, the Netherlands and Belgium,” writes the Bridge Tank staff, “are the most severely hit by the outbreak and have struggled to flatten the curve efficiently. This is mostly explained by the delay in implementing proper lockdown and social distancing measures.”

By contrast, look at the bottom of the graphic to see how the Czech Republic and Greece are managing to slow doubling rates to 13.2 and 19 days, respectively, four weeks after the detection of their first cases, as opposed to just 4.6 days and 5.1 days for the UK and France, respectively.

To the question of Germany’s decision to try opening bookstores and small retail sites, the report writes, “Germany seems to be an outlier. Though its lockdown measures have been implemented relatively later and not fully, the number of deaths has not reached the levels met by its neighbors but is still progressing quickly in relative terms.”

In other words, it’s unclear how stable the market’s current situation may be and how, as Merkel is stressing, the balance at hand might change.

Ruet is quoted with the analysis, saying, “In the sea of data about COVID-19, one indicator stands out: the doubling rate of deaths and confirmed cases. It allows to measure how well countries are flattening the curve. With the exception of Germany, we see a strong correlation between an early lockdown and subsequent success in controlling the spread of the virus.”

More from Publishing Perspectives on the German market is here, more from us on bookselling is here, and more on the coronavirus pandemic is here.