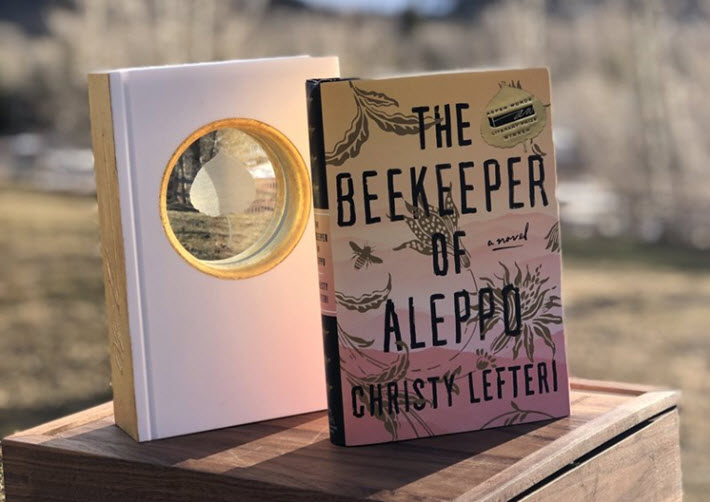 The 2019 novel ‘The Beekeeper of Aleppo’ by Christy Lefteri, a daughter of Cypriot refugees, wins the internationally focused Aspen Words Literary Prize.

‘The Loss of What We Hold Dearest’

As we’ve written in our previous coverage, the Aspen Words honor—under author Adrienne Brodeur’s direction for the Aspen Institute—is an especially valuable one in American literature because it rewards work addressing issue-driven fiction, work that’s actually about something.

This is an award for work sought out by the entertainment-weary among us, and a great breath of encouragement in the States where lighter fare so regularly overshadows probing, weightier storytelling. Ironically, during the pandemic, deeper content may not be read by consumers as much as we’d like to think it would be because on all sides people talk of wanting an “escape” from the distress of the contagion. Only those experienced in the transporting power of dramatically courageous work know its special kind of entertainment and the knack for “escaping” into new layers of reality.

And if you still crave that levity, watch Lefteri get the news from Brodeur that she’s won the award in a video from the Aspen. “Wait, say it again,” Lefteri says, caught off-guard but laughing amid the bedroom-broadcasting on Zoom that’s become the mainstay of pandemic production.

Things ‘That Need To Change in the World’

Not only has the Aspen committed to nurturing meaningful work, but it’s put considerable money where its moxie is. Lefteri is the winner of the award’s US$35,000 purse, which is supported, in part, by the Amazon Literary Partnership.

“With the first sentence, ‘I am afraid of my wife’s eyes,’ we enter a world too visible for the protagonists who can’t, nevertheless, turn away.”Esmerelda Santiago, Aspen Words jury chair

Colin Dwyer at NPR, the prize’s media partner, writes that Lefteri “tells NPR that her win has not just brought her joy, though there certainly has been joy. She has also felt a seeping kind of sadness since she learned in private last week, remembering the refugees who inspired her novel—not just her parents, but also the people whom she met several years ago in Athens, where she says she volunteered at a [UNICEF-supported] refugee center.

“‘I knew that I could get on a plane and come back to London whenever I wanted. But those people that I met—those wonderful people were stuck in Athens, and they didn’t know where they were going to end up,” says Lefteri, who was raised and is based in the UK. I think winning this award is so exciting, it’s such a wonderful thing, and at the same time, it reminds me of those things that I feel so passionately about that need to change in the world.'”

Normally, the Aspen Words prize is presented in a ceremony at New York City’s Morgan Library, but of course the coronavirus #COVID-19 pandemic drove the occasion onto the ether, as is happening with most of the world’s award announcements. At this writing, the Johns Hopkins Coronavirus Resource Center in its 8:39 a.m. ET (1239 GMT) April 17 update shows 11,477 deaths in New York City alone. The United States’ caseload stands at 671,425; total deaths, 33,286.

And with Lefteri’s award, the Aspen program also establishes itself as a thoroughly internationalist presence in the crowded field of publishing and book awards. And of particular interest in her book is her treatment of the relationship between Nuri and his wife Afra, and the impact that becoming displaced people has on their bond.

The Aspen Words Literary Prize was given to the British-Pakistani writer Mohsin Hamid in 2018 for Exit West (Penguin Random House/Riverhead, 2018), his novel about migration and refugees. Hamid’s work also drew the most votes of the 141 titles nominated by international libraries for the 2019 International Dublin Literary Award.

And the prize in 2018, its first outing, went to Tayari Jones for An American Marriage (Workman/Algonquin, 2019), her novel about racism and unjust incarceration. As Publishing Perspectives readers will recall, Jones’ book won the UK’s Women’s Prize for Fiction in June.

‘Is It Possible To Ever Feel Safe?’

The criteria for submissions by publishers for this program require that a book be a work of fiction (novel or a short-story collection) published by a US trade publisher in the commercial, academic, or small press sector. What’s refreshing is that work coming into English from other languages, as long as it’s been published during the right date period by an American house, is eligible.

And as our story today on the World Book Day #ReadTheWorld promotion from the prolific translation imprint Amazon Crossing indicates once again, the rate at which translated work is moving onto the American market is accelerating.

As Publishing Perspectives readers will remember, the shortlist for the 2020 Aspen honor, in addition to Lefteri’s book, comprised:

Jury chair Esmeralda Santiago is quoted on the choice of Lefteri’s book, saying, “With the first sentence, ‘I am afraid of my wife’s eyes,’ we enter a world too visible for the protagonists who can’t, nevertheless, turn away.

“How do human beings process the horror around them, the senseless violence, the loss of what we hold dearest? Is it possible to ever feel safe, to love, to appreciate beauty? Christy Lefteri asks these questions of her characters, and ultimately, of us.”

And you can see Lefteri’s acceptance comments online, from an author a bit more collected than she was when first learning of her win: “Though we can’t extend a physical hand” to each other “through the pages of a book,” she says, “we can express that we understand. It deepens our empathy. We may feel compelled to make changes that relate to those stories of others.”

More from Publishing Perspectives on international awards programs is here. More from us on the American book business is here. And more on the coronavirus pandemic is here.