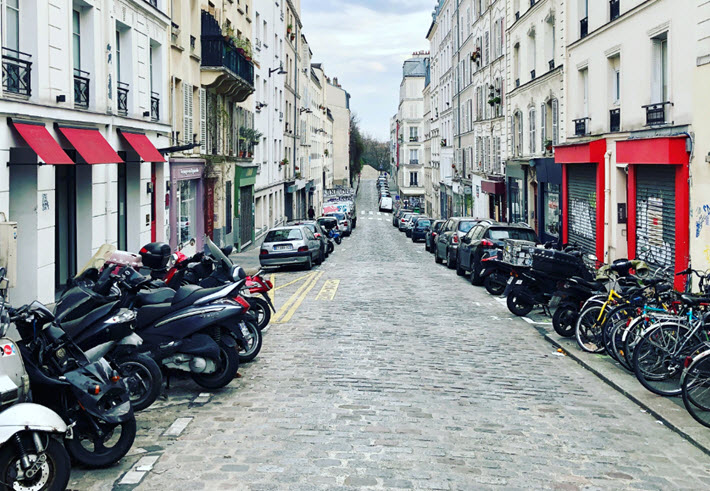 A deserted street in Paris. France’s coronavirus lockdown has been extended to at least April 15. Image: Olivia Snaije

Editor’s note: In confirmed COVID-19 cases, the Johns Hopkins Coronavirus Resource Center‘s figures at this writing show France to be sixth among the 171 countries in which the virus’ presence has been detected (after the United States, Italy, Spain, China, and Germany). At this writing, 45,171 cases are registered in France, with 3,030 deaths. Monday’s (March 30) fatalities were the worst one-day tally yet, reaching 418 in this nation of some 67 million people. As Fabrice Piault is reporting today at ‘Livres Hebdo,’ between March 18 and 27, the first 10 days of national confinement, the French industry has postponed 5,236 new releases and new editions originally set for spring. Half of those postponed titles have no new dates. —Porter Anderson

When COVID-19 Lockdowns Freeze a Market

If the publishing industry is like a global family, it has never been more apparent than it is now, amid the surreal and global COVID-19 pandemic. France—like other markets including China, Italy, Spain, the United Kingdom, and parts of the United States—continues to grapple with the impact of lockdowns on citizens’ movements and the nation’s commerce.

The French national lockdown was imposed on March 17 and then extended on Friday (March 27) by 15 days, to April 15.

Decisions on how to handle salaries and payments are made differently by bookshops and publishers, based primarily on their size and whether they’re independent.

Smaller and independent companies tend to put their employees on chomage technique or chomage partiel—two terms that translate to partial unemployment. This is reserved for exceptional situations in which an employee’s contract is suspended. The employee receives some 70 percent of his or her normal salary from the company. In these cases, the company is assisted by the government.

The mid-sized independent publishing house Actes Sud chose this avenue, as have some divisions of the family owned Madrigall, the holding company of Gallimard.

Big publishing groups such as the Vivendi-owned Editis and Lagardère’s Hachette Livre have transitioned their staffers to work from home on full salary, although some imprints are encouraging workers to take their holidays now, to ensure their presence once business is back up and running. According to several staff members at Editis’ imprints, they’ll be on chomage partiel—partial unemployment—in April.

And for many of the smaller independent companies, two to three months of losses can create a make-or-break situation. 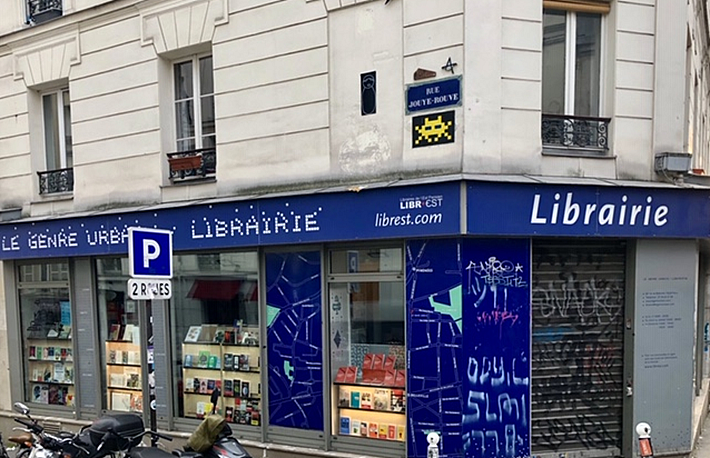 France has approximately 3,300 independent bookshops, but bookselling remains a risky business with tight cash reserves. A number of stores will suffer financially. Most larger publishers have agreed to reschedule their payments to bookshops, and will reimburse them immediately for returns. But smaller independent publishers will run short on cash, themselves.

“I’m very worried,” says an art book publisher. She speaks on condition of anonymity because her press is partly owned by one of the larger independent publishers. If that publisher-owner is in financial straits and is bought by one of France’s big groups, her company’s future becomes extremely imperiled, she says.

She and her several employees are on partial unemployment but are working from their apartments in Paris, which she points out is somewhat paradoxical. The brunt of her work is rescheduling book launch events. “Bookshops are begging us not to bring out too many books,” she says, “and to limit the releases in the spring and summer so they can sell what they already have in stock.

“The question is what to postpone to September—which is already overloaded—and what to cancel.”

As Publishing Perspectives readers know, overproduction of books has been a problem for years in the French market as in others, and the situation today merely aggravates it.

Many of an art book publisher’s titles are linked to exhibitions and cultural festivals and their production is often financed by museums and other institutions.

“Even if we come out of confinement mid-May,” the publisher says, “will the government allow events such as the [June-to-September] Arles photography festival or the [July] Avignon theatre festival to go ahead?” 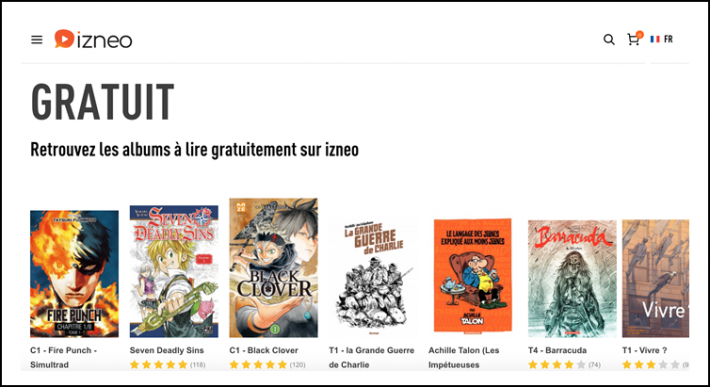 On March 18, the minister of culture, Franck Riester—now in isolation after testing positive for COVID-19—announced an emergency aid package of €22 million (US$24.3 million) for the cultural sector, €5 million euros of which (US$5.5 million) are earmarked for the book industry. Many in the industry, and in particular those in the smaller independent companies, say they don’t think it will be enough.

On March 19, the minister for economic affairs, Bruno le Maire, said in a radio interview for France Inter that he would be willing to consider reopening bookshops as designated “essential” businesses—as long as people didn’t gather on the premises. But the union of booksellers issued a statement saying that public health measures aren’t secure enough for bookshops to reopen, even if it means they’re losing business to Amazon and other online retail platforms that are delivering, including FNAC, the major French cultural goods chain.

The postal service still is operating, delivering three times per week. But packages are no longer being picked up. So books must be deposited directly at a post office. Some smaller bookshops in towns and villages are delivering books by hand.

A “We Sign It” petition initiated by two historians at this writing has gathered 1,168 of a target 10,000 supporters who pledge to come to the aid of bookshops and publishers by boycotting “behemoths like Amazon” and calling on the government to allocate more financial support to the sector.

On March 20, a group of 248 independent publishers wrote to Riester, asking him to give urgent attention to their precarious situation.

And in a report today from Livres Hebdo‘s Fabrice Piault, GfK’s research data cites a “sharp drop” in publishing sales in the first week of the national confinement’s closure of bookstores, March 16 to 22, with unit sales down 54 percent against the previous week. 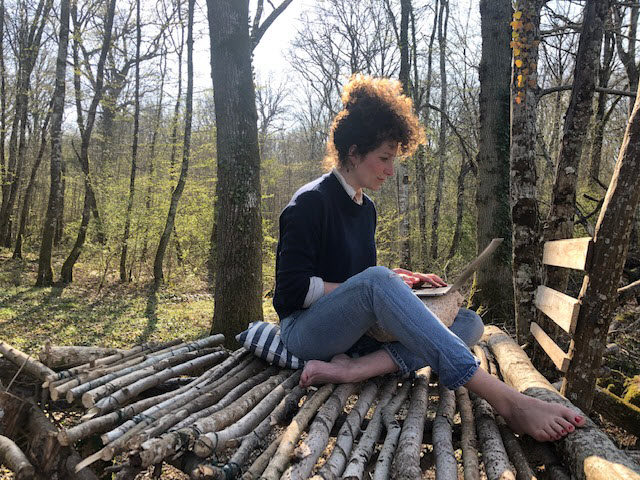 Clara Tellier Savary, a co-founder of Éditions Goutte d’Or, has moved to a friend’s house in the country

Asked how she’s coping, Clara Tellier Savary of the three-year-old Éditions Goutte d’Or independent house says she’s “anxious at night,” but that the situation is a good one for “slow publishing” enthusiasts. It’s an opportunity, she says, “for us to have more time to work on a big, sensitive project we were going to launch in May.”

One of the company’s three co-founders, Savary has left Paris and lives with three other couples and their children in a friend’s house in Burgundy. She says that she and her co-founders were just about to start paying themselves salaries when the coronavirus emergency arose. Now, those salaries are on hold and their apprentice will go onto partial unemployment, while they wait to see what the government does to assist small businesses.

“We don’t want to panic,” Savary says. “We’ll put the business on pause and come out of it stronger.” She says the company has lowered the price of a selection of its ebooks, which sell on the Harmonia Mundi platform.

Likewise, many much larger publishers have reduced prices and offered free access to a number of ebooks as well as educational material.

One of the first to do this was Gallimard. Its series named “Tracts” comprises short fiction and nonfiction reads by authors in the publisher’s backlist. Each segment is posted online at 10 a.m., 2 p.m., and 8 p.m.

Editis and others offer free access to academic books for children online. Every morning at 9 a.m., children can go to the École des loisirs site for a variety of activities with drawings and games by their favorite authors.

A 2019 study from the French Publishers Association (Syndicat National de L’Édition, SNE) indicated that audiobooks were rising in popularity, with 14 percent of French respondents saying they’d listened to an audiobook. The COVID-19 pandemic’s limitations on the physical publishing market is expected to boost audiobooks in France as elsewhere.

Some publishers are putting free audiobooks online through April, with an emphasis on literature for young readers, as in the work of the publisher La Montagne Secrète.

According to Claire Peloux, technical project manager for Dilicom, a centralized electronic data interchange (EDI) platform that supplies ebooks to booksellers and libraries, digital loans from libraries have doubled since March 16.

“Publishers, distributors, and platforms are thinking about technical solutions to facilitate access to books,” Peloux says. She’s busier than ever, she says, and last week was working with the Madrigall group, which modified its licenses so that 25 people (rather than 10) can borrow a single ebook at one time; 15 people can borrow one audiobook.

And the artbook publisher says that in the long run the economic impact of the situation may “oblige us to produce less, mostly in literature, which in a way could be healthy.

“However,” she says, “we’ll also be pushing back on more innovative and risky projects with authors who are less well-known. And this isn’t a good thing, because the risks we’ll have taken with these authors—in whom we believe but who aren’t yet successful—will be put aside in favor of those authors who are more commercially successful.

“Pessimists say that once the crisis is over, people will hang on to their money. Optimists think people will have a tendency to buy books and give them as gifts because books are perennial objects.”

More from Publishing Perspectives on the French market is here, and more from us on the coronavirus outbreak is here.

Download ‘Publishing in Times of Crisis’ free of charge