Perhaps in a time of mounting stress caused by a viral outbreak with no vaccine, it’s easier to sense the urgency of the dynamic behind the International Publishers Association‘s (IPA) Prix Voltaire.

On February 25, we reported that the 2018 Prix Voltaire recipient Gui Minhai  has been sentenced to 10 years’ imprisonment by Beijing. And that’s an indication of how this award program, based in humanitarian response to cases of oppression, differs from most other awards regimes in publishing.

Led by Norwegian publisher Kristenn Einarsson, the Prix Voltaire is the IPA Freedom to Publish committee’s program of recognition of—and advocacy for—publishing’s honorees who rarely are able to be at their prize ceremonies.

They’re selected for showing valor in the face of threats and often retaliation for exercising their freedom of expression. In all too many cases, they suffer for it in ways most publishing people will never experience.

Last year’s winner, the Egyptian publisher Khaled Lotfy is also in prison—for a translation the state didn’t like—and has exhausted the allowed military court appeals. The IPA on January 14 called on Egypt’s president, Abdel Fattah el-Sisi, to issue a presidential pardon. That call, so far, has gone unanswered.

We’re reminded today, then, that as wrenching, inconvenient, and disruptive as the cancellations of world publishing’s great trade shows and other important gatherings may be in a time of viral outbreak, most of the industry’s people at least have their freedom. Some do not, including Prix Voltaire laureate and Saudi blogger Raif Badawi (2016).

The winner of this year’s Voltaire will be named at the IPA’s May 28 to 30 International Publishers Congress  in Lillehammer. And the 2020 shortlist announced today from the organization’s offices in Geneva features primarily small presses rather than focusing as much as it has in some years on specific people.

As Einarsson is saying today in his announcement of the 2020 shortlist:

“The 2020 IPA Prix Voltaire shortlist is made up of 4 remarkable publishers who put themselves at great risk to bring books they deem valuable to readers. We celebrate their bravery and thank them for being an inspiration to publishers around the world.”

The IPA members serving with Einarsson on the Freedom to Publish committee are:

Avesta Publishing is the recipient of the 38th International Istanbul Book Fair’s Freedom of Expression Award from the Turkish Publishers Association. At the time, it was said that 18 of Avesta’s books were banned in a 2018 court decision.

The press was founded in 1995 and has published as many as 700 titles, some in English and French but most in Kurdish and Turkish.

The company has faced lawsuits over the years for a number of its books, and in 1999, the company’s warehouse was burned in an attack, destroying a reported 3,000 books. As reported in September by Constanze Letsch for the Arab Weekly, “Although they were never explicitly banned, Kurdish languages were criminalized as separatist at the foundation of the Turkish Republic in 1923. Legal reforms in 1992 created tentative freedom. Ten years later, the publication of Kurdish texts was legalized and a small literature scene started to develop.”

The owner of the publishing house, Abdullah Keskin, is reported to have been investigated in 2019 on charges of propaganda for terrorist organizations. Since 2015, as Letsch writes, Kurdish work has been deemed as hostile by the state and much of the literature produced in Kurdish has disappeared from retail channels.

In June, she reports, “An investigation for ‘terrorist propaganda’ was opened against Keskin because he used words like Kurdistan, Kurdish, and Kurd on social media.”

A longtime political activist who has served eight years in detention, Chong Ton Sin launched Gerakbudaya Publishing House in 2000, followed by his establishment in 2003 of an academic imprint, SIRD, in 2003.

Chong’s intention was to create a publishing house and distributor for controversial but important books for Malaysians to read at affordable prices, and to make those books available in all the country’s major languages.

At the time, much of Malaysian media and publishing was directly or indirectly controlled by the government through ownership and censorship. Recent books included The Sarawak Report on the 1MDB scandal–in which Najib Razak, a former prime minister, has been alleged to have enriched himself through a government-run development company called 1Malaysia Development Berhad.

Other publications have focused on Malaysia’s recent political history as well as on deforestation (a source of corruption in Malaysia).

Kuala Lumpur is to succeed Sharjah this year as UNESCO’s World Book Capital in April.

With its name also translated at times as Free or Freedom Publishing House, the Liberal Publishing House is a young nonprofit company founded on February 14 of last year in Ho Chi Minh City by a group of dissidents. Their creation of the press represented an undisguised intent to publish writings on public policy and politics, including criticism of the government, an effort to bring the work of a growing cohort of dissident writers in Vietnam to a wider readership.

In its English-language messaging, the press says that some of its publications’ titles translate to:

According to a November article by Adam Bemma for Al Jazeera, the country’s criminal code allows punishment of up to 20 years’ imprisonment for “anti-state” publication of this kind. The state’s reported intimidation tactics have caused founders of the press to work in undisclosed locations, and police harassment reportedly has included interrogation of consumers who bought some of the press’ books.

Human Rights Watch and Amnesty International, also in November, called on the government to stop what the two agencies called in a joint statement, an “escalating crackdown on an independent publishing house.”

The two agencies’ statement reads, in part, “As part of the crackdown, dozens of people have been harassed and intimidated by police across the country, and at least one person has reported torture and other ill treatment in detention. The crackdown sends a disturbing message to people who want to exercise their right to freedom of expression and access information and ideas and is yet another sign of the authorities’ intolerance of peaceful dissent.” 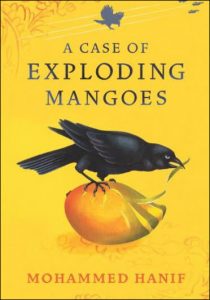 The satire A Case of Exploding Mangoes by British-Pakistani journalist and novelist Mohammed Hanif is about the Pakistani dictator Zia-ul-Haq (1924-1988).

The book was longlisted for a Booker (then called the Man Booker) in 2008 and is published in the United States by Penguin Random House’s Vintage Books. It was named a best book of the year by papers including the Washington Post and the Boston Globe.

The book was published in Urdu by Karachi’s Maktaba Daniyal in November. And in January, copies reportedly were confiscated in a raid on the press. The author is reported to have received a defamation notice from Zia’s son.

A January report from Ben Farmer for The Telegraph carries Hanif’s assertion that people claiming to be from Pakistan’s Inter-Services Intelligence (ISI) confiscated all the copies of  the Urdu translation of A Case of Exploding Mangoes from the Maktaba Daniyal offices. Hanif has said that security agents also seized stock from bookshops in Islamabad and Lahore.

As Farmer writes, “The information wing of Pakistan’s military said the military had not taken action against the book and an official at the ISI told the Associated Press [that] the comments were a ‘cheap attempt to gain popularity by hurling false accusations on a national institution.’ The publisher declined to comment.”

Sponsors of the Prix Voltaire’s 10,000 Swiss franc purse (US$10,734) have in past iterations featured publishing houses in many countries including Germany, the United States, the United Kingdom, Japan, and the Netherlands, all of them this year are from Norway and Sweden.