Two annual programs that sponsor publishers to attend the Frankfurt Book Fair are this year concentrated on children’s and young readers’ content.

Announced from home-bound Germany, the Frankfurter Buchmesse team is opening applications for the 2020 trade show, the dates of which are scheduled as October 14 to 18.

Germany’s stance in the coronavirus COVID-19 pandemic has been interesting to many, in that while it presents this morning (March 27) 47,278 cases of the infection–ranking it No. 5 in the world for caseloads behind the United States, China, Italy, and Spain–it has reported only 281 deaths. Our figures are from the Johns Hopkins Coronavirus Resource Center’s 7:57 a.m. ET update (1157 GMT, 1257 Berlin).

As Rob Schmitz was writing on Thursday (March 26) at NPR, aggressive and early testing seems to be the key in this population of 83 million. As Schmitz writes, German researchers created the first test for COVID-19 to be used in the public domain. The testing regime was stood up in mid-February and Berlin has tested some 120,000 people weekly since late February, working through the country’s 16 federal states (which have control of these programs).

The German chancellor, Angela Merkel, has herself been in self-quarantine after seeing a doctor who was later found to be infected. Reuters Berlin, however, reports that her second of three tests has come back negative, and she’ll have her third test early next week, as she continues to work remotely.

Should all be workable for an on-time Frankfurter Buchmesse in October, its annual Frankfurt Fellows and invitational grant opportunity for emerging international publishers will, of course, again be part of the programming.

And it’s interesting, isn’t it, how readily you notice the close proximity to each other of the members of last year’s Frankfurt Fellows program in their photo above. May we all safely stand so near each other again in October. 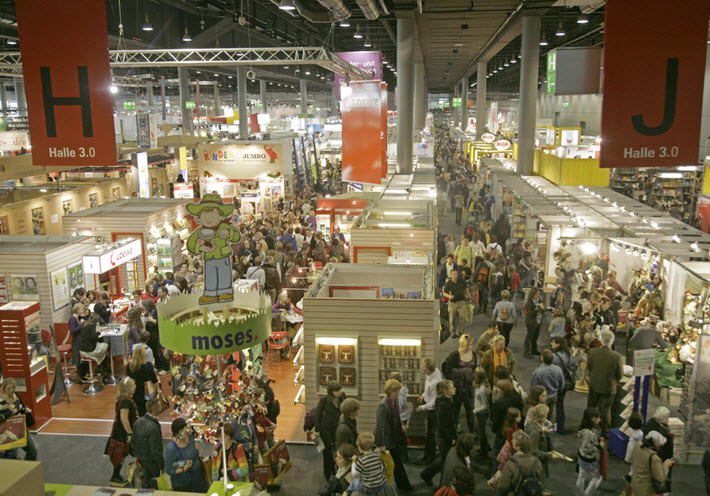 The Frankfurt Fellowship Program has its focus on YA publishing this year, and has been operating now for more than two decades. Young publishing professionals working in that field—publishers, literary agents, editors, rights and licensing managers—are encouraged to apply before April 30. Candidates for the program should have several years of work experience and a good level of English.”

The fellows’ program runs longer than the fair, encompassing a two-week itinerary of visits to and meetings with German publishing houses and bookstore workers in several cities–lots of seminars and networking. Costs of travel and accommodation are covered by the program. Some of our coverage of this program is here.

In this year’s program, the fair expects to place new emphasis on “neighboring content producing industries,” a nice phrase, including film, audio, and gaming. The program concludes with the trade show itself, which typically sees more than 300,000 visitors and some 7,450 exhibitors from at least 100 nations.

Again this year, one berth in the fellows program is provided by the family of the late Fred Kobrak—who was with Macmillan, Collier Macmillan International, and Thomson for a career spanning some 40 decades. Kobrak died in late 2016 at age 88 and his family has, since his death, funded an annual Fred Kobrak Frankfurt Fellow availability for one of the 16 professionals accepted for the program.

The application information on this program is here.

Also focused this year on young readers’ content, the annual Invitation Program at Frankfurt brings 20 publishers from developing book markets to the fair. In many cases, these publishers may be among the most adventurous and energetic in their home markets but not yet drawing the kind of revenue to afford the trip to Frankfurter Buchmesse.

You can find some of our coverage of this program and its participants here.

The invitation group’s program will run October 8 to 18 and “is aimed at small independent publishers from Africa, Asia, Latin America, the Caribbean, the Arab world, and Eastern Europe.” Candidates for the program should have a good level of English.

In this case, the group’s members receive a free stand at the fair in addition to travel and accommodation costs, the funded provided by the show and by the German Federal Foreign Office. Prior to the trade show’s opening, the group is given a seminar running two and a half days.

Information on this program is here.

For more on YA and publishing as it relates to the fair, you can see this page, which features “Frankfurt New Generation,” which is set in Hall 3.0, K 91. Another informational page, this one on children’s and YA media, is themed “Frankfurt Kids” and comprises some 1,549 publishers’ work–more on that one is here.

More from Publishing Perspectives on Frankfurter Buchmesse is here, and more from us on the coronavirus outbreak is here.