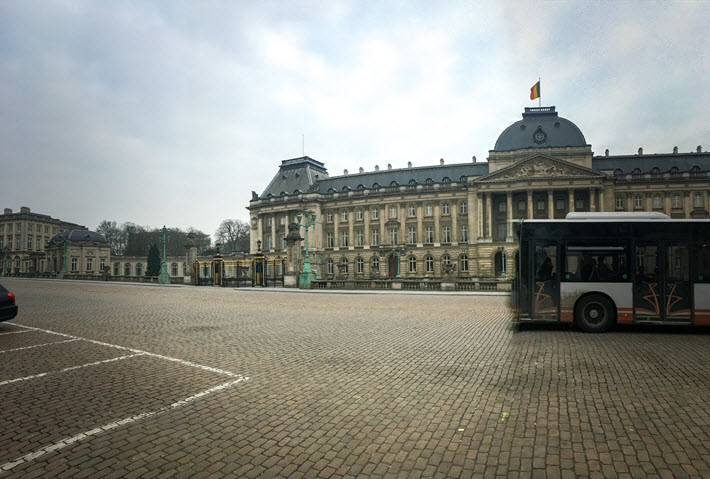 Today, our listing of organizations and publishers announcing changes to their plans amid the COVID-19 emergency features news from the United Arab Emirates, Canada, the UK, France, and the United States.

‘We Don’t Know How Long This Will Last’

A week after the Brussels Book Fair managed to go forward on its scheduled dates, the Federation of European Publishers’ Anne Bergman-Tahon sends a note: “Brussels is dead calm and we don’t know how long this will last—which is probably quite frightening.”

Belgium, in fact, has registered 886 coronavirus cases and four deaths, which ranks it 15th among the 136 nations so far reporting the virus’ presence in The New York Times’ latest update this morning of its comprehensive world listings.

And we have our own listing here of the most recently reported changes in world publishing’s planned conferences, trade shows, book fairs, festivals, meetings, ceremonies and other events.

Keep in mind that we’re glad to carry  your news of such changes of plan. There’s a note at the bottom of today’s article on that.

Today, the news arrives from the offices of International Publishers Association vice-president Bodour Al Qasimi—who has served as the head of Sharjah’s World Book Capital advisory committee—that, of course, those events, which were centered around April 14, will have to be canceled at this point.

Nevertheless, there’s good news, in that a specially curated collection of online content is being prepared about this year of extraordinary activity and presence for the United Arab Emirates’ third state, beginning in April 2018 when Bodour led a delegation to Athens to support Greece’s designation as World Book Capital in the year prior to Sharjah’s.

The city that would have been in Sharjah in April to take the baton is Kuala Lumpur. We anticipate hearing from colleagues there about how their plans may be impacted by the health emergency.

We should note, too, that the timing of the contagion’s arrival has been especially hard on Sharjah.

A model of state-sponsored emphasis on publishing, books, reading, and literature as a socially defining priority, Sharjah has held guest-of-honor positions in the last year in Torino, Madrid, and Moscow. And under the direction of Sharjah Book Fair’s Ahmed Al-Ameri, it was to have been London Book Fair’s Market Focus nation this month, and Bologna Children’s Book Fair’s guest of honor nation, as well.

“We have decided to cancel this year’s Tech Forum 2020 conference,” reads a message from Toronto, “in light of the escalating situation with COVID-19 and its impact on our speakers, partners, and attendees.”

As Publishing Perspectives readers know, Tech Forum is a highly anticipated annual event in the Canadian market, and was scheduled to be held March 23 to 15, with an expected 300 book industry players in attendance to hear 50 speakers over three days.

“While the in-person conference will not be proceeding as planned,” BookNet’s staff writes, “we don’t want your hard work and amazing presentations, insights, and discussions to go to waste. We will be releasing as many of our planned sessions as possible online as videos or live webinars over the next few weeks, possibly into the summer, so please get in touch to let us know if you’d like to be a part of that discussion.”

If you need to be in touch with the conference, the address provided is techforum@booknetcanada.ca .

Justin Trudeau, Canada’s prime minister whose wife Sophie has tested positive for coronavirus, is to speak today in a news conference at 1 p.m. ET (1700 GMT), as reported by the Canadian Press service. 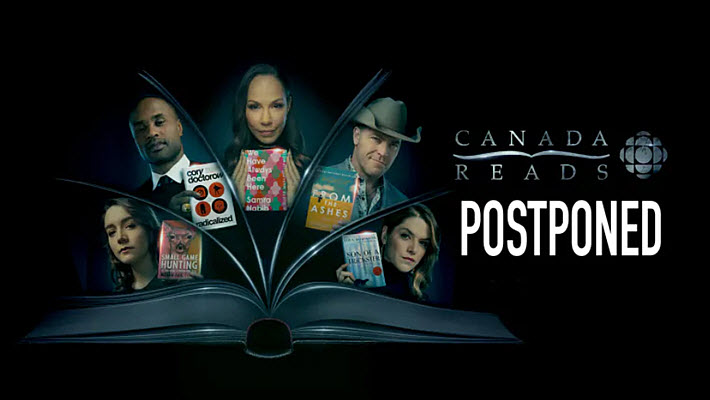 One of the spring’s events we’re highest on here at Publishing Perspectives—because it focuses on serious issue-driven contemporary literature—is the Canadian Broadcasting Corporation’s Canada Reads, which we previewed for this year here. 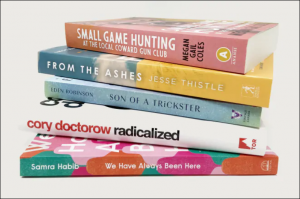 The program was to have begun its four consecutive days on the air today (March 16), during which four of the five titles for this year would be eliminated.

Nevertheless, this event’s power lies not just in the incisive arguments by five high-profile personalities in defense of “their” books, but also in the fact that the often intense, even raw debates are held in front of a live studio audience at CBC’s studios in Toronto. Clearly, that’s not the type of event that’s safe during the coronavirus pandemic.

“Given the ongoing developments with COVID-19 and the related travel concerns,” producers write, “Canada Reads has made the difficult decision to postpone next week’s event until we can convene our stellar panel of advocates in front of a live audience.”

There are still chances to look in on this unique programming in the interim. CBC Radio plans a series of one-hour programs on the books next week. And “CBC Books has released six podcast episodes to help get you acquainted with this year’s lineup.”

The United States’ National Book Foundation has announced that its extensive spring season of NBF Presents programming will have to be canceled, of course, along with educational programming originally planned to go through May 1.

Publishers, note: Submissions for the 2020 National Book Awards will be live on April 1.

The National Book Foundation offices, led by Lisa Lucas, are closed, and the staff is working remotely, reachable during normal business hours. They ask that  you join #TeamBook on Twitter ( @NationalBook ). The group expects to provide “a running list of resources and reading to get you through today and tomorrow.”

“The library is working to expand access to ebooks and increase awareness of our vast array of online resources,” Marks says in his announcement. “For example, New Yorkers can sign up for a library card to read ebooks on our SimplyE app, use research databases, and much more. Patrons can access the Library’s Census resources online. The “Ask NYPL” virtual reference service will be available and answering any questions.”

Our regular readers of our daily updates will know that the 73rd Cannes Film Festival team has been working to manage some iteration of the event, including considering sharply downsized sessions under France’s former 100+ limitation for crowd sizes.

Even though the Macron government has issued even more extensive lockdown measures, as Elsa Keslassy writes for Variety, the festival is rather amazingly restating its intention to go on in some form. Earlier reports that it has been called off, according to its director, Thierry Fremaux, are wrong.

Keslassy writes, “We will take a decision together around mid-April,” said Fremaux.

The festival’s press conference is scheduled for April 16.

Having announced on March 9 that writers Stéphane Henaut and Jeni Mitchell would be given the French Heritage Book Award honor on April 15 for A Bite-Sized History of France: Gastronomic Tales of Revolution, War, and Enlightenment at the Colony Club (The New Press, 2019), the French Heritage Society now says that its ceremony for the fourth annual round of the award has had to be canceled.

The idea is to set up a new date in September.

Per the society’s information, “The French Heritage Society Book Award was launched in 2017 in celebration of the organization’s 35th Anniversary. The award recognizes and honors a work of distinction that illuminates for the general public either an important element of French cultural or historical patrimony (especially but not solely in the domains of architecture, décor, couture, gardening and the arts) or the considerable and noteworthy influence France, its citizens, and its culture have had in shaping American history, thought and culture.”

The French Heritage Society has offices in New York and Paris. 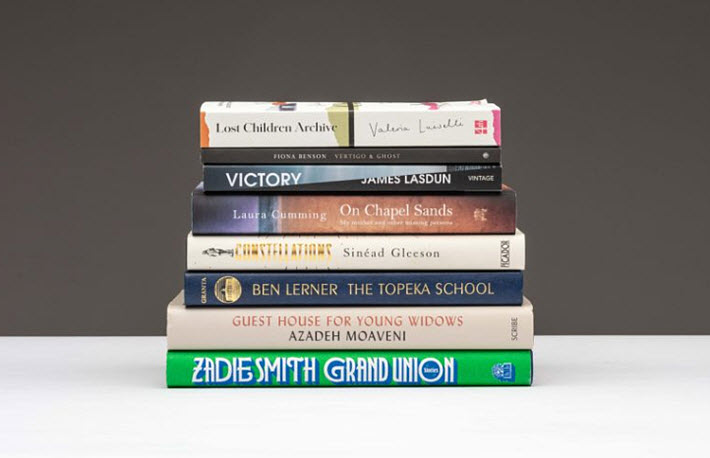 You won’t be surprised,” write organizers of the Rathbones Folio Prize, that their awards ceremony set for March 23 at the British Library must be canceled.

“The winner of the prize will still be announced on March 23,” the company writes, with details of when and where to be confirmed.<

“We’re also looking into a digital solution for the Rathbones Folio sessions featuring the shortlisted authors, to take place on March 22.” Further information is to be announced shortly.

In the meantime, the organization’s lead, Minna Fry, recommends reading its shortlist, some which may “transport you to other worlds beyond Covid-19 and self-isolation.”

While we’re receiving good notice from many associates in the world industry, we hope you’ll join them in telling us about your coronavirus-related news so that we can convey that information to our international readership.

Please send such news to Porter@PublishingPerspectives.com

Our thanks today to Elisa Molinari with the Aldus Network and LIA in Italy for assistance with notifications.