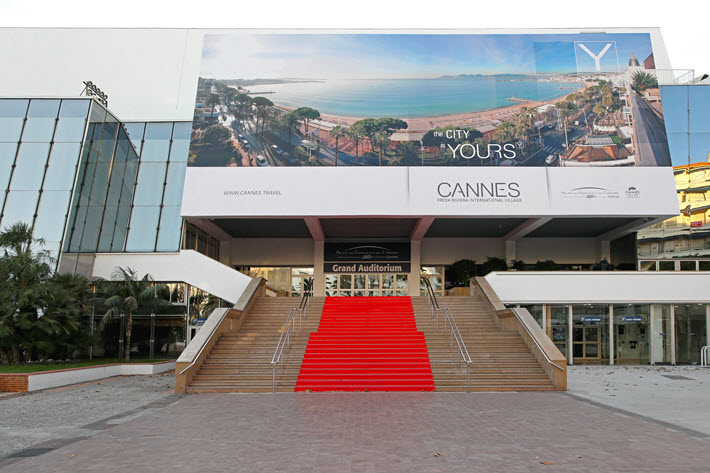 At Cannes’ Grand Auditorium, the 2012 iteration of the film festival. Image – iStockphoto: Baloncici

Many book publishing industry people are annually involved in Cannes, of course, as they work to connect literature and filmmaking. For example, as we’ve reported, Frankfurter Buchmesse agains plans a Cannes Film Festival tour for agents and publishers. In the program, they participate in SCELF’s “Shoot the Book” pitching program, offering their work to producers in film and television.

As we start compiling today’s (March 12) list of coronavirus-related news items—primarily centered around events news—Elsa Keslassy is reporting for Variety that the Cannes Film Festival is working on a contingency plan “to keep the festival open” in France.

Cannes’ dates are May 12 to 12. And downsizing Cannes seems to be the strategy of the moment, per Keslassy’s reporting.

“One option,” Keslassy writes, “is to limit seating in the main auditorium where gala world premieres are hosted. The Palais venue has 853 seats in the orchestra and an additional 1,456 seats on the balcony.”

It should be noted that such a scramble at this point appears to be somewhat quixotic, simply in light of international travel restrictions alone—before you take into account restrictions on gatherings to 1,000 people.

She spells it out: “Cannes’ optimism could be short-lived if the country is placed in quarantine, as is the case in Italy. France’s president Emmanuel Macron will be making a televised speech on Thursday evening to address coronavirus concerns and possibly announce new measures.”

The 4:43 a.m. ET (9:43 GMT) update of The New York Times‘ comprehensive update on caseloads indicates that France currently is facing 2,284 COVID-19 cases, with 48 deaths. it is under an “avoid travel” order from the Centers for Disease Control at this point and stands fifth in the world for the highest number of detected and reported cases.

Napoli città libro, the publishing and book fair of Naples, is announcing a postponed schedule to “:the first days of October” from the originally planned April 2 to 5.

Italy, of course, is under full nationwide lockdown by Rome, and is at present the hardest hit and most deeply impacted of the European nations. You’ll find we have many relevant stories here.

Thanks to our associates at the International Publishers Association, we can tell you that the 25th İzmir Book Fair, was was to have been held April 11 to 19, has been postponed to June, dates to come.

The Turkish ministry of trade is affecting this decision with its guidance for events held after March 16.

Sesh Seshadri, director and general manager with Lonely Planet in Gurgson, and the managing partner of Overleaf Books, has been kind enough to spotlight for us Shilpa’s Jamkhandikar’s Reuters report from Mumbai on Wednesday’s announcement that the Indian government “will suspend all tourist visas to the country in a wide-reaching attempt to prevent the spread of coronavirus, as cases across the region continued to rise.”

The new order to suspend visas goes into effect on Friday (March 13), to continue to April 15. The suspension includes “all existing visas, except diplomatic, official, U.N. and other international organizations, employment, project visas.”

“Such restrictions were already in place for citizens of China, Italy, Iran, Japan and South Korea—the five countries worst hit by the outbreak of the virus.”

Penguin Random House’s US CEO Madeline McIntosh, in a message to the company’s workforce provided to Publishing Perspectives, has announced that employees who have the capability for “distancing” by working from home and don’t feel it’s wise to work in the company’s New York City offices–or to commute to or from 1745 or 1450 Broadway–should speak with their supervisors to make plans for handling the situation.

McIntosh makes the point that, “I am grateful that at this time we have no knowledge of anyone in our PRH community who has been exposed to the virus, so our business here proceeds as usual.” She recognizes the “quickly moving developments in the New York City region,” however, and references “working intensively together to prepare as a community and a company for the coronavirus (COVID-19) outbreak.”

The guidance includes a point about localization in a far-flung company: “Note that given the geographic nature of the spread of the virus, we do not plan to issue companywide guidelines for the US. Instead, our leadership and task force teams will continue to constantly monitor the situation in the communities where we operate and make decisions for their locations and populations.”

And while indicating that “getting books into the hands of readers around the world” is the company’s ultimate goal, McIntosh also tells the staff, “That being said, we are focused first and foremost on maintaining the health and well-being of our employees. That priority will guide all of our planning and preparation now and in the future. In the meantime, please take care of yourselves and your families.”

McIntosh takes care to recognize the company’s tech team and its critical role in contextualizing such a complex corporation for new modes of operation: “I want in particular to thank our IT colleagues who have been working around the clock to maximize the number of people who are able to work remotely. I also want to thank all of our departments for the work you’re doing to ensure our business will continue without interruption, whether we are working from home or from our regular offices.”

As reported by Sam Byford at The Verge, Twitter has moved from “strong encouragement” to an order that its employees work from home, “mandatory across the world.” That company has some 4,900 employees and, of course, is following the examples of Amazon (in New York, New Jersey, and Seattle) and other major tech companies.

Additionally, we understand that Simon and Schuster is “evaluating all [book] tours,” per reports, and that no one should travel for such a purpose “if they are personally nervous about it,” according to internal messaging. Working from home is said to be under consideration at that Big Five house in the States, as well.

We’re informed today that the 46th Book Fair of Buenos Aires—with Havana as its guest city this year—is being attempted, even as so many other events are being forced to cancel.

“The 46th International Book Fair of Buenos Aires is scheduled to start its professional days on April 28, opening on March 30 and closing on May 18. More than 1,500 cultural events are scheduled, as every year,” reads the fair’s media messaging.

It continues to review the situation, according to the information we’re given.

While we’re receiving good notice from many associates in the world industry, we hope you’ll join them in telling us about your coronavirus-related news so that we can convey that information to our international readership. Please send such news to Porter@PublishingPerspectives.com