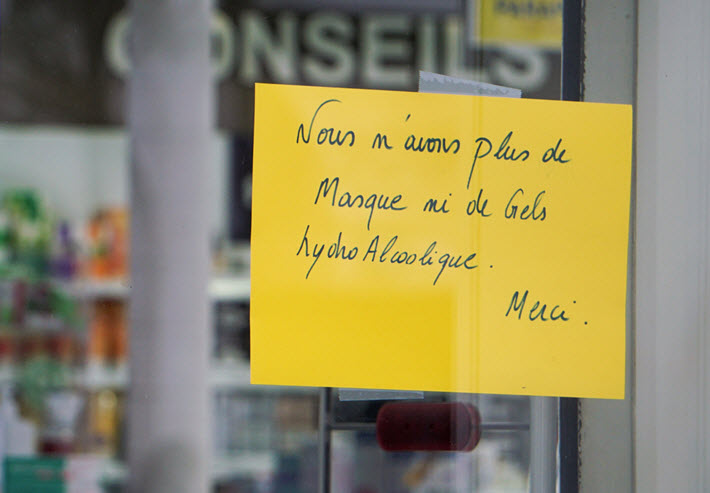 A note on a Paris pharmacy door (March 6) informs customers that the store has no masks or hand sanitizer. Image – iStockphoto: Daylight Loren

While there probably are people in the publishing industry who—even in a life-and-death world pandemic—will not want to say that Amazon is doing the right thing, Amazon is doing the right thing in announcing that, “We are temporarily prioritizing household staples, medical supplies, and other high-demand products coming into our fulfillment centers so that we can more quickly receive, restock, and ship these products to customers.”

Books, along with many other product classifications, for the moment are being deprioritized.

At Publishers Weekly, Jim Milliot and John Maher reported Tuesday (March 17), “Amazon has told other suppliers, including publishers, that their goods will receive a low priority until at least April 5, according to both a letter PW has obtained that was sent to independent publishers earlier today.”

“We will let you know once we resume regular operations,” Amazon writes to its third-party vendors. “Shipments created before today will be received at fulfillment centers.”

The move Amazon is making reflects the depths of the situation at hand and the mode of response that should meet the moment.

As epidemiologists and other health experts are trying to convey the deepening gravity of the international coronavirus COVID-19 emergency to citizens—many of whom don’t want to hear it—some in government are logically calling for a use of wartime powers to deploy civilian commercial resources to answer the needs of medical systems unready for a crushing load of infection cases in emergency rooms and field hospitals.

And it has been a full week since CNN’s reporting summarized by Jessie Yeung recounted, “Parts of Italy, particularly the northern regions, are seeing a ‘tsunami of patients,’ and the health care system is ‘one step from collapse,’ according to Antonio Pesenti, intensive care coordinator in the Lombardy crisis unit.”

Now present with sustained transmission in 143 countries, the virus has been detected in a terrifying 31,506 cases in Italy, according to The New York Times‘ updating comprehensive figures and maps, which we recommend you bookmark and follow. These figures are from the update at 7:26 a.m. ET today (1226 GMT). They will update dramatically as you recheck them. Scroll down below the world map to see country-by-country figures.

In Italy, the deaths now total 2,503. And in the last three days, the daily death toll, per CNN’s reporting, peaked on Sunday at 368 with almost as many on Monday and Tuesday each.

In the United States, one source tied into the state health departments’ tallies indicates that the national caseload at our publication time is 6,496, while that earlier update at the Times puts it at 5,879.

The point is that the coronavirus outbreak is indeed an emergency, a lethal one. If you haven’t yet acted on guidance to distance yourself from others, do so now.

Describing Amazon’s new move to channel its forces toward crisis response first, Rachelle Hampton writes at Slate, “As more cities resort to drastic shelter-in-place measures and photos of empty grocery store aisles circulate on the internet, the giant e-tailer has stepped in to fill the gaps, but even it’s straining under the weight of an unprepared country. Many listings for items like hand sanitizer and toilet paper showed that they were out of stock or that delivery would be delayed by several days.”

Milliot and Maher at PW add, “The letter [to vendors] closed by noting that the e-tailer is aware of the effect this will have on businesses, and is ‘working around the clock to increase capacity, and on March 16 announced that we are opening 100,000 new full- and part-time positions in our fulfillment centers across the US.'”

In the States, economic modeling indicates that unemployment may shoot up as high as 20 percent as workers are ordered off the job to self-distance themselves and their families. Amazon’s ability and need to open new jobs is just has healthy as its prioritization of crisis-related goods.

In the note on its site, organizers of Salone Internazionale del Libro di Torino—originally scheduled for May 14 to 15—say, “The organization is still working with passion on the 2020 edition, but in order to continue to be a reference point for this extraordinary community, the book fair must first of all guarantee the safety and health of its public, of its exhibitors, and of the staffers who work there.”

Torino is 141 kilometers (87 miles) from Milan and is the capital of the Piedmont, adjacent to the Lombardy in hard-hit northern Italy.

“Taking note of the emergency situation—national and international—in which we find ourselves, and in agreement with the institutions and partners that collaborate in an essential way with our organization, as well as with [the producing venue] Lingotto Fiere, the Torino Book Fair has considered necessary and responsible to postpone the event to a date that we will communicate as soon as possible.”

In a note of compassion, the message ends: “In a moment of great sacrifice on the part of all Italians, the salon wants to express its most heartfelt closeness to those who are experiencing first-hand the effects of the emergency: the sick, their loved ones, as well as all the health personnel and institutions that work tirelessly for everyone’s health and safety.”

We have the following notice from Daniel Gorman, the recently arrived new director of London’s English PEN:

“As a global community [through International PEN], we face enormous challenges in every aspect of our lives right now. At English PEN, our primary aim is to ensure the safety of all our members, supporters, volunteers, staff and guests. Therefore, it’s with great sadness we have decided to postpone or cancel all our events at least until 30 April, following the latest public health advice from the government.”

The affected programs include:

If you’ve booked a ticket for any of these events, the organization says, contact the venue in question for a refund.

“We’ll do everything we can to either reschedule or find digital ways” to produce planned programming, organizers say, “and we’ll be working closely with our friends and partners to keep our work going as best we can during these difficult times.”

We’re receiving good notice from many associates in the world industry, and we’d be glad to consider having you join them in telling us about your coronavirus-related news for our international readership. Please note that we don’t use articles written by industry professionals, but if you’d like us to consider doing an interview with you, contact Porter@PublishingPerspectives.com.

Our thanks today to Elisa Molinari of the Aldus Network and Italy’s LIA for assitance in our listings of international publishing updates.