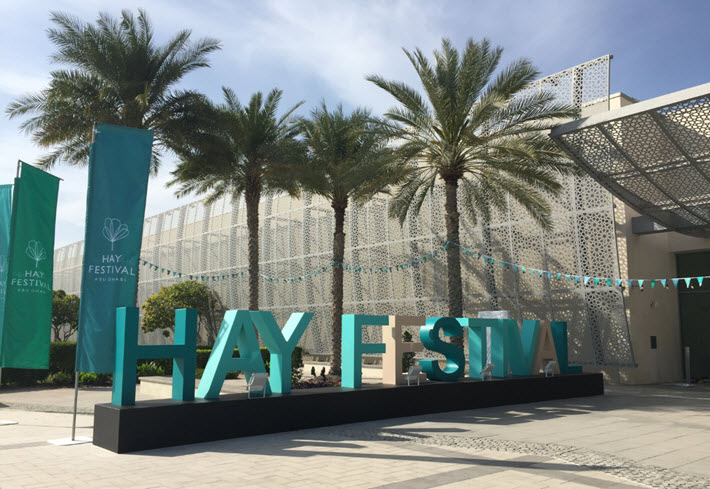 With the coronavirus crisis in Italy growing, the biggest publisher cancels its participation in Bologna, as Hay signals it’s on for Wales.

At the Hay Festival Abu Dhabi, which had its premiere in February. The flagship Hay Festival event in Wales is scheduled to run as planned in May, organizers say. Image: Hay Festival

Second Big Five Publisher Is Out of Bologna

As you’ll remember, we reported on Friday (March 6) that Simon & Schuster has elected not to send staffers to the 57th Bologna Children’s Book Fair for its rescheduled May 4 to 7 dates.

Now, Penguin Random House is following suit, announcing that it, too, will decline to participate in the big trade show, which normally sees some 30,000 industry attendees. In a statement, the publishing house says, “In light of the travel risks related to the coronavirus and our ongoing concerns for the health and well-being of our employees, authors, and partners, Penguin Random House will not participate in the Bologna Book Fair.”

A PRH spokeswoman confirms to Publishing Perspectives that the decision applies to all worldwide employees including DK and Verlagsgruppe Random House in Germany.

Having been the first major Western publishing event of the year to adjust its plans—the Taipei International Book Exhibition had led the way with its own postponement to May from February—Bologna now stands curiously as one of the last holdouts of the spring. And it begins to look like Bologna may undergo the kind of incremental collapse that London Book Fair suffered before its cancellation was announced—when every major publishing house had bowed out of participation.

While the show’s director, Elena Pasoli, has told us she’s been initially heartened at the willingness of many to reschedule—and hotel availability in the new May dates in Bologna did indeed become tight quickly as everyone scrambled to change dates—the situation in Italy, of course, now has sharply worsened.

The government in Rome on Monday night intensified the most sweeping public restrictions in response to the COVID-19 spread outside of Asia, expanding what had started as a in a “red zone” covering the Lombardy and 14 provinces to the entire country of some 60 million people. The nature of what’s being called a “lockdown” does allow most citizens to travel for work or emergencies. But all public gatherings are banned.

As the Washington Post’s live-updates team of Adam Taylor, Teo Armus, Rick Noack, Kim Bellware, and Alex Horton reports this morning, Italy now has more than 9.000 of the world’s 110,000 cases of the coronavirus, with almost 500 deaths recorded so far.

The prime minister’s expanded restrictions are scheduled for now to last at least until April 3—a month before the rescheduled Bologna trade show. And one of the points other nations are making in watching the Italian emergency is that efforts at “distancing” are important earlier than later.

Once containment is no longer possible, as Juliette Kayyem, a former assistant secretary for homeland security under Barack Obama, has said, “We’re just trying to extend the runway,” slowing the spread as much as possible to avoid overwhelming health care resources with peak numbers of cases at once. Her article from Sunday is at The Atlantic.

And the Italian example—in which experts are saying that one of Europe’s strongest health systems is at the breaking point—is a case in point for what can happen.

As Publishing Perspectives readers know, the Italian publishers association—(Associazione Italiana Editori, AIE)—has joined with sister creative industries’ organizations in calling on Rome for assistance, as book sales in the country dive 25 percent. In areas of peak contagion, the shortfalls are running as high as 70 percent.

For those interested, Bologna has begun offering reimbursements in responses to requests made by March 20. Details are here.

Having earlier moved to recommend that its workforce of some 50,000 in the Seattle area work from home, Amazon now is expanding that guidance to its New York- and New Jersey-based staffers.

In Jeffrey Dastin’s report for Reuters, the company says, “We continue to work closely with public and private medical experts to ensure we are taking the right precautions as the situation continues to evolve.”

This advisory to work from home also takes in the company’s workers in the San Francisco Bay area and Italy-based staffers in Milan.

Mark Chandler at The Bookseller this morning reports that Peter Florence, the founding director of the Hay Festival, says the flagship event, May 21 to 31 at Hay-on-Wye in Wales is expected to be held on schedule.

“As ever, the safety of our festival goers, speakers, and staff is of paramount importance to us,” Florence says in  a statement.

“We continue to monitor the situation closely and follow the best available advice from the chief medical officer,” of the UK–which has yet to move to ban public gatherings or otherwise implement its emergency plan’s “delay” elements.

We have inquired about international Hay programming ahead and will bring this to you when organizers provide an update.

At the Times, the UK this morning stands at 321 cases of coronavirus, five deaths.