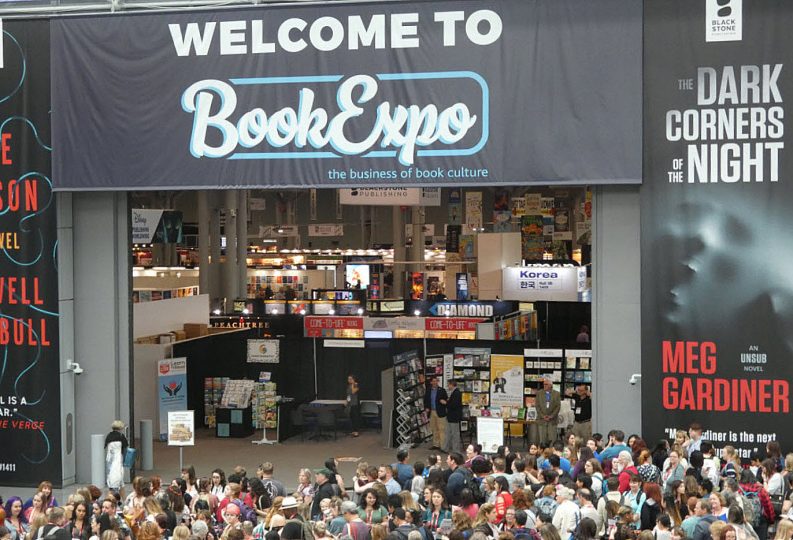 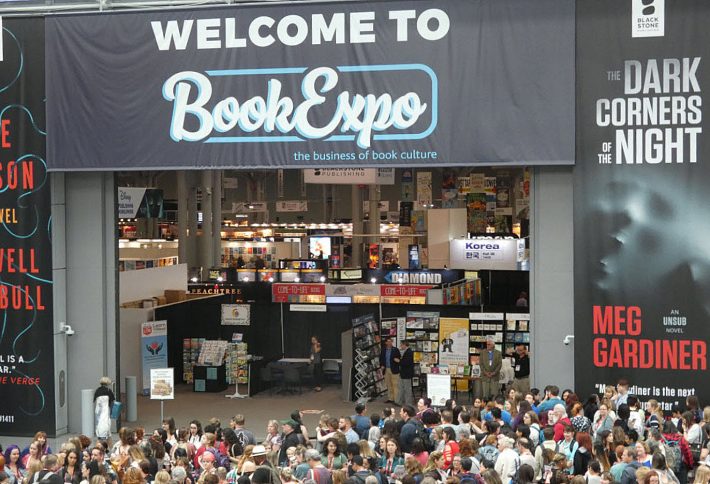 At the entrance to BookExpo 2019 at the Jacob K. Javits Center in New York City. Image: Porter Anderson

Penguin Random House’s New York communications office is messaging the news media this afternoon (March 18) that PRH will not participate in BookExpo and BookCon 2020 at the Jacob Javits Center in Manhattan.

The news continues to reflect many publishing players’ dilemmas in assessing what normally is the spring book business’ busy roster of trade shows, conferences, book fairs, and festivals.

A spokesperson for the company says, “In light of the New York City and state guidance to substantially limit the size of events and number of participants in public gatherings, we regret that we have had to make the difficult decision to withdraw as a participant in BookExpo and BookCon 2020.

“We will be exploring additional ways to connect with booksellers, librarians, and readers going forward.”

The news of the PRH withdrawal from the main annual American trade show for the book publishing industry, of course, follows the cancellation of Reed Exhibitions’ London Book Fair and ReedPop’s postponement of Seattle’s Emerald City Comic Con to new summer dates, as yet unannounced. Reed normally produces more than 500 events in a year in 43 industry sectors.

As we reported on March 5, BookExpo has issued a statement promising to be “proactive and transparent” about the evolving situation. Many in the international industry were frustrated by the timing of London Book Fair, the confirmation coming only six days before the trade show was to open. The announcement about Emerald City’s postponement was similarly timed.

As is usual in the spring, BookExpo has begun releasing news of some of its programming, including lineups for the annual children’s and adult book author breakfast events. Also in place are plans for publicists’ speed dating, the children’s book silent auction, and the popular adult editor’s buzz session.

The show has suffered in recent years from a steady decline in attendance and exhibitors. Last year, it had no presence in the lower levels of the Javits Center, although the southern end of the main hall was busier than in 2018, thanks to the addition of a new non-book retail show called Unbound.

The site at present has a “coming soon” note for the show’s New York Rights Fair, which has struggled in recent years. It returned to the Javits in 2019 after being co-produced off-site in 2018 by BolognaFiere and Publishers Weekly. But its many tables last year at the Javits looked sparsely used, and international publishing professionals have noticed over recent years that BookExpo has stepped away from the “Market Focus” international programming that London Book Fair has maintained as a core component of its programming.

A week ago, Gwen Everett at Crain’s New York Business, wrote of how business travel traffic has been “sluggish” for conferences at the Javits Center. And at the Wall Street Journal, Katie Honan reports today that New York City officials “hope to turn the Jacob K. Javits Convention Center in Manhattan into a large hospital,” according to the city’s emergency management commissioner, Deanne Criswell.

New York, both the state and the city, have become the United States’ most challenged hotspot in the coronavirus outbreak. as can be seen in The New York Times’ updating US map. At this writing, the 5:15 p.m. ET update (2115 GMT) of the Times database offers the state of New York as being well ahead of the rest of the country in its number of cases: 2,382. The deaths in the state of New York, however, number 20. Washington state, on the other side of the North American continent, is facing the largest number of deaths, 67, not least because of infection clusters in nursing home and assisted living settings.

New York State governor Andrew Cuomo has been perhaps the nation’s most aggressive in publicly vying for the federal government’s attention to the crisis. Today it was announced that he had secured Donald Trump’s agreement to dispatch the USNS Comfort, an enormous US Navy hospital ship based in Norfolk, Virginia, to sail into New York’s Harbor in an attempt to get ahead of what’s expected to be a profound increase in caseloads in the city.

On Tuesday (March 17), this had been signaled in advance for journalists by Sam LaGrone, writing at USNI News That both the Comfort and the USNS Mercy were beginning activation for duty in relation to the coronavirus crisis.

Most recently at this writing on Wednesday afternoon, as updated by ABC News’ WABC flagship television statement’s site in the city. New York state businesses have been ordered to cut their workforce numbers by at least 50 percent on-site–excluding essential services—at Cuomo’s direction. This, as New York City’s mayor, Bill de Blasio has talked of a possible city order requiring citizens to “shelter in place,” a term for an emergency action better understood in terms of gun violence than a  public health emergency. San Francisco is the first US city to undergo a “shelter in place” order.

And as the Washington Post staff is reporting this afternoon, the trading floor of the beleaguered New York Stock Exchange will be closed on Monday (March 23), with all trading action being accomplished electronically.

As we’ve reported, Penguin Random House, the most globalized of the Big Five publishers, is operating in varying configurations to suit its many international locations.

The show’s run was originally planned for April 30 to May 18.

Presumably, there may be information coming about new dates–and media messaging this afternoon refers to this as a postponement. It should be noted, however, that no news dates have been assigned to the event in this announcement, nor does it say that such dates will be forthcoming.

Feria Internacional del Libro de Buenos Aires refers to itself in promotional material as “the most important annual literary event in the Spanish-speaking world. The show normally draws more than 1 million visitors, and the programming can comprise more than 1,000 events in a single year’s staging, not least because this is a fair that runs for some three weeks.

A professional program is part of the event, this year originally set for April 28 to 30. Organizers say that element of the show alone can draw some 12,000 registrants, among them publishers, distributors, booksellers, literary agents, translators, illustrators, graphic designers, printers, educators, and librarians.

This year’s city of honor at the Buenos Show is to be Barcelona.

More from Publishing Perspectives the coronavirus outbreak is here. And more from us on Penguin Random House is here.