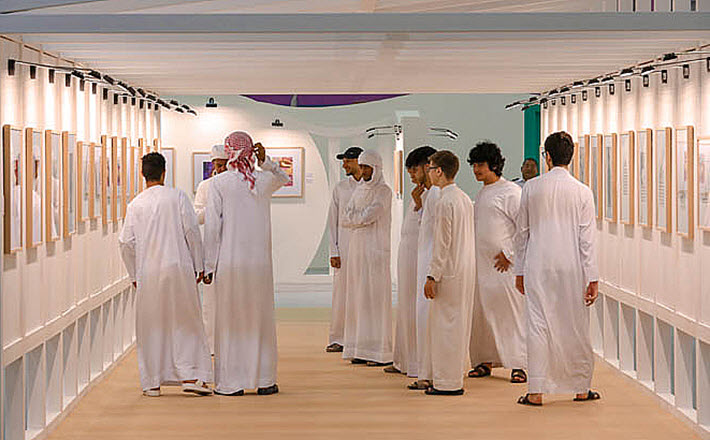 World publishing today watches more events fall to the advance of COVID-19 in England, the United Arab Emirates, and more.

At Sharjah Children’s Reading Festival 2019. After last year’s show drew more than 200,000 attendees, the program this year has had its April 8 to 18 run canceled. Image: SCRF

As recently as Friday (March 6), media messaging from the London Book and Screen Week indicated that tonight’s opening events (March 9) would go on.

As Publishing Perspectives readers will recall, The London Book and Screen Week, now in its sixth year, was set to have its CAMEO Award winners named tonight at London’s White City House.

London Book and Screen Week is the public-facing element of the industry-facing London Book Fair, which, of course, was canceled only six days before its planned March 10 opening by Reed Exhibitions. The week stages events that not only are reflective of literature and London Book Fair’s position in world publishing but also of the works-to-screen dynamic in film, television, and other media, which of course may well be finding more popularity with consumers than books today.

This morning, word has arrived from London that both tonight’s CAMEO Awards and the week’s kickoff “Poetry Beyond Print” session with poet Scarlett Sabet and musician Jimmy Page have been canceled.

We’re told that ensuing programs of the Book and screen week, for the moment, are still scheduled to proceed.

As of this writing, Boris Johnson is to chair another COBRA meeting today. That’s the government’s Cabinet Office Briefing Rooms emergency committee. Per BBC News’ updates, “The meeting is expected to consider whether ‘social distancing’ measures should be phased in. These could include banning of big events, closing schools and encouraging home working.” Latest case counts in the UK bring the total to 280.

The above graphic on the annual Sharjah Children’s Reading Festival site tells the tale.

Last year, the huge show—with its parking lot always hosting a massive fleet of school buses—drew more than 200,000 visitors with its theme of “Explore Knowledge” and a raft of 167 publishers from 18 nations participating in 2,546 activities. But the sprawling public-facing event this year, intended to run April 8 to 18, has had to be canceled

A report compiled by the Middle East Eye from wire-service agencies confirms that as of Sunday (March 8)—the start of the work week—all UAE schools are closed. All residents are advised not to travel abroad. Iran, of course, has the leading caseload in the region at present. The Times has it at 6,566 cases and 194 deaths, the world’s fourth-largest outbreak. Bahrain is next, with a much milder 62 cases, followed by Kuwait with 61. 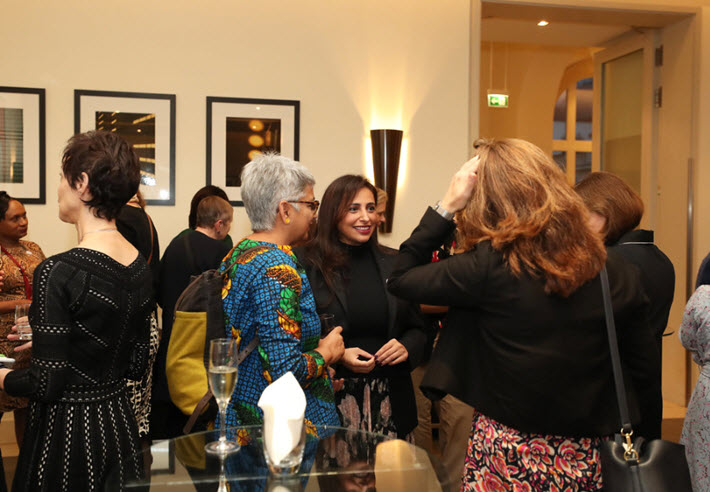 Like London Book and Screen Week’s CAMEOs, the PublisHer anniversary celebration planned for this morning (March 9) at the British Library was another of the events arranged as part of the flotilla of activities that always accompany the London Book Fair mother ship.

Meant to toast a first year of extraordinary progress since the first PublisHer dinner was held in 2019 during the trade show, the program was dependent, of course, on the participation of international publishing’s women (and now men) who support the effort to find creative solutions to the gender diversity and inclusivity challenges that publishing’s women face at work.

Of course, Publishing Perspectives has an anniversary interview with PublisHer founder Bodour Al Qasimi and the organization’s newsletter has produced another of its series of interviews, this one with Tracey Armstrong, president and CEO of Copyright Clearance Center—who was to have been the key sponsor of Monday’s event in London.

Currently, the next anticipated PublisHer event is to take place during the postponed Bologna Children’s Book Fair.

On Monday 9 March we were hoping to celebrate a year of PublisHer with a half-day event in London's British Library. Sadly, @LondonBookFair's cancellation means we've had to call it off. Looking forward to a post-#coronavirus world!

Bologna Is Now in the Yellow Zone 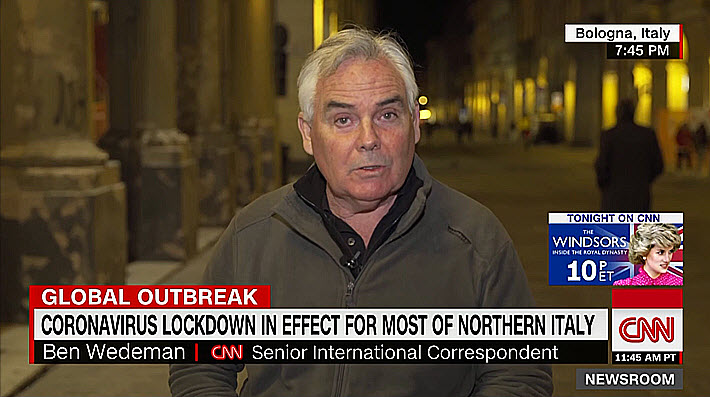 As CNN’s Ben Wedeman has reported overnight—here is his story with Tara John—the new and sweeping restrictions imposed by Rome on some 16 million people in Italy’s most prosperous region includes the Lombardy and 14 provinces. The lockdown  places Bologna just outside the hardest hit “red zone,” in the government-classified “yellow zone.”

The situation in Italy, of course, is Europe’s most dire outbreak and noncompliance with regulations can get a citizen three months in prison and a fine of €206 (US232).

As Wedeman and John report, “Restrictions have also been imposed throughout the rest of Italy, including the suspension of events at cinemas, theaters, museums and sports arenas.” This means, of course, that it’s unclear how reliable the May 4 to 7 dates for Bologna’s 30,000-person trade show will be.

We continue to monitor the situation. As of this writing, the Times’ comprehensive count has 7,375 cases, 366 deaths.

South by Southwest: No Insurance

And as we reported Friday, the South by Southwest (SXSW) festival was canceled by the city of Austin, Texas.

On Sunday (March 8), Elizabeth Findell reported at the Wall Street Journal that the show was not insured.  She writes, “The chief executive of South by Southwest said organizers are unsure how they will keep the festival going after the city canceled it because of the novel coronavirus, which he said could cost them millions.

“Austin officials on Friday pulled the plug on the tech, music and movie event, citing the threat of the coronavirus outbreak. The move dealt a devastating blow to the finances of the festival, whose insurance doesn’t cover disease-related cancellations, South by Southwest co-founder and Chief Executive Roland Swenson said in an interview Sunday.”

It’s likely that more events, including some in the book publishing sphere, will face this same financial burden.

Publishing Perspectives continues to update you as we have new information on world publishing’s events and developments relative to the deepening spread of the coronavirus outbreak.

And while we’re here for publishing, of course, we’ll just point out—for our many readers who are literate in the ineffable poetry of tennis—that California’s BNP Paribas Open at Indian Wells has been canceled, as well. Ben Rothenberg and Christopher Clarey at the Times have that story.