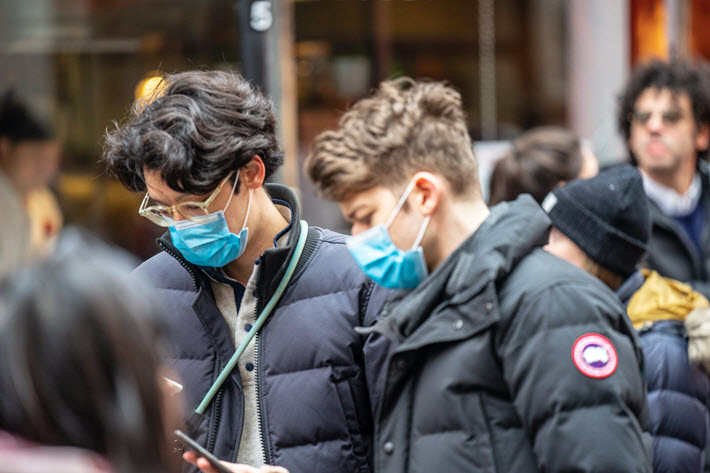 Developing story: Amazon Publishing withdraws from London Book Fair, the States’ Macmillan and HarperCollins having pulled out over the weekend, along with the Hachette US rights team.

Facemasks spotted in London amid news of the spread of the coronavirus COVID-19. Image – iStockphoto: Power of flowers

LBF: ‘Difficult Times for Everybody’

As concerns and cancellations mount around the coronavirus outbreak, this morning (March 2) so do reported cases of COVID-19.

At eight days until the opening of the industry-facing trade show—which normally draws some 20,000 visitors—the uncertainty is concerning many in the international industry who have contacted Publishing Perspectives, saying they need to make clear—and potentially expensive—plans quickly and definitively.

This morning, from London, Amazon Publishing’s Sammia Hamar has alerted the news media that, “Out of an abundance of caution, and with the health and safety of our employees, customers, and partners as our No. 1 priority, we have taken the decision to withdraw from participating in the London Book Fair 2020 and the Amazon London Book Fair party on the March 11.

“We understand that you have spent significant time preparing for meetings and speaking engagements at LBF. We deeply regret that we will not be able to proceed as planned. We look forward to future opportunities to meet and collaborate.”

A Macmillan spokesperson has issued a brief statement: “The Macmillan’s US Trade Division will not be attending London Book Fair.”  This, of course, matches  the decision made by Simon & Schuster and Ingram, as we reported earlier.

From HarperCollins US’ Erin Crum, we have this statement: “HarperCollins Publishers can confirm that staff from its international and US teams will not be attending London Book Fair 2020. HarperCollins is currently reviewing its presence at the fair and the attendance of its UK teams.

“In addition, and with the health and safety of its staff and industry colleagues in mind, HarperCollins will no longer hold its pre-London Book Fair party which was scheduled to take place at Home House on Monday, March 9.”

From Hachette Book Group, we have a statement from senior vice-president of communications Sophie Cottrell, saying, “In a spirit of caution and protecting the health of our colleagues, Hachette Book Group will not be sending any employees to the London Book Fair.”

London Book Fair’s site now carries an updated message on its site reading, clearly reflecting the frustration that many in the industry are fearing at not having a more definitive reading from the trade show’s administration. The message reads:

“LBF is going ahead, 10-12 March. As part of Reed Exhibitions, we are continuously monitoring the situation around COVID-19 coronavirus, in line with Public Health England and World Health Organization guidelines. If the advice from the UK authorities does change we will act upon it and immediately update the industry.

“We appreciate that these are difficult times for everybody and thank people for their patience and understanding in a fluid situation. As previously stated, for those attending this year’s show all Public Health England and WHO guidelines are being followed and appropriate additional measures being put in place.

“For those unable to get to LBF2020 we will be doing our best to ensure that as much content as possible is streamed and shared though social channels. We will also be putting in place clear guidelines and communications about last minute absent participants.”

The Bookseller staff in London is reporting that London Book Fair is to go into the Olympia London venue on Wednesday (March 4), “with building work to commence on Thursday.”

But as BBC News is reporting, Boris Johnson is to lead a meeting today of the government’s Cabinet Office Briefing Rooms emergency committee—called COBRA—”after the number of UK coronavirus cases jumped to 36.”

BBC’s reporting has 13 more UK patients diagnosed with infections on Sunday (March 1) alone, 12 in England and one in Scotland. As the BBC puts it, “Senior ministers and health advisers will be told that the virus will present a ‘significant challenge.'”

And as many industry players express deep regret over these developments, many also are reflecting the frustration that many feel, too, about an edition of London Book Fair that—even if it can go forward March 10 to 12 as planned—seems to be shrinking by the day.

I'm not going to be at #LBF20. I live in the country these days so I'll be sad not to see everybody's lovely face in the capital but it's irresponsible and cavalier to proceed with an International event with over 25K visitors in an airless greenhouse right now.

In Paris: ‘Force Majeure,’ as Leipzig Soldiers On

This morning (March 2), Paris Match is reporting that the Salon du Livre de Paris—originally set for March 20 to 23—has definitively canceled overnight, media messaging from the show’s chief Vincent Montagne reading, in part, “Following government decisions to ban gatherings of more than 5,000 people in confined spaces, we have taken the decision to cancel the 2020 edition with regret.

“Our sense of responsibility obliges us to take no risk with the health of all those who make the success of Livre Paris: publishers, exhibitors, authors, speakers, partners from more than 50 countries, and of course our public family of more than 160,000 visitors each year.”

Montagne is quoted by Livre Hebdo, saying, “ In a case of force majeure, it is not us who decide but the government ”

That comment clearly helps demonstrate the kind of rationale that some trade show and book fair producers may feel they need to pull down a major event: the force majeure of a government order.

In France, the Louvre on Sunday posted its closure as CNN reported the country has at least 100 confirmed cases.

In Germany, however, Leipziger Buchmesse reports that it will go forward, despite the fact that the number of cases was reported Sunday to have doubled to 129 by Agence France-Presse in a report carried by TheLocal.de.

In an announcement on its site, the March 12 to 15 Leipzig fair says, part:

“There are currently no official restrictions that prevent events from operating at the Leipzig trade fair.

“The health of our customers, partners and employees is the top priority for all events. Please help us to implement the safety regulations against the spread of diseases. Pay attention to your personal protection and the protection of the other exhibition guests and comply with hygiene rules.

“The Leipziger Messe is in constant communication with the responsible authorities and the AUMA industry association. We also follow the recommendations of the WHO, the Robert Koch Institute and the Federal Foreign Office. If there are new action orientations, we will implement them immediately and inform you about them.

“In addition, the Leipziger Messe takes its own precautionary measures and has set up a task force. At events at the Leipziger Messe, the medical service is generally staffed with medically trained staff and is made aware of suspected cases. The reporting chain for security-relevant events has been supplemented specifically for suspected COVID-19 cases.”

As we have reported, in the world publishing industry, the concern is not limited to health and safety of employees but also to potential liability and expense in the cases of lockdowns or quarantine scenarios enforced to try to contain regional outbreaks.

If there were a rapid rise in cases and the authorities moved to contain it, who would pay the costs of keeping publishers’ and literary agencies’ employees in quarantine?

These and other worries are likely to trigger further departures from London Book Fair participation in coming hours and days.

As we have reported extensively, Bologna Children’s Book Fair—in the hard-hit Emilia-Romagna region of Italy—was the first major international trade show to suffer the disruption of the fast-spreading coronavirus, postponing its event for now to May 4 to 7.

Publishing Perspectives continues to follow and update the situation closely.