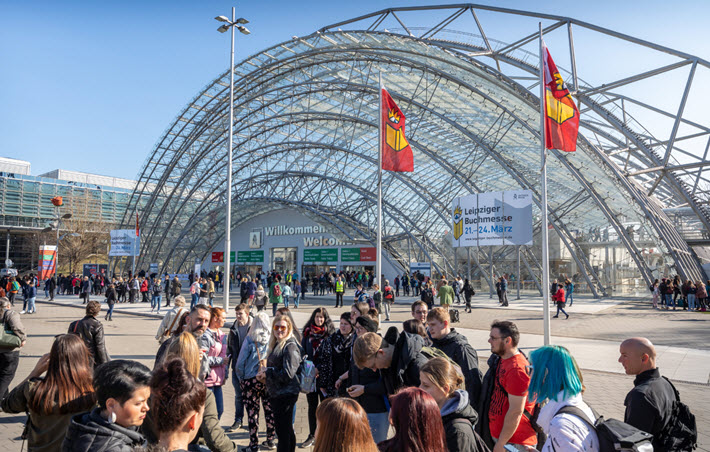 In something of a surprise turnaround, Germany’s huge Leipzig Book Fair has announced today (March 3) that it is canceling its 2020 iteration amid the rising outbreak of the coronavirus COVID-19.

As recently as Monday (March 2), the March 12 to 15 program’s media messaging had indicated that organizers intended to persevere. But as is being reported by the Frankfurter Allgemeine this morning, “The city of Leipzig and the Leipziger Messe have jointly decided to cancel the book fair,” according to a city spokesman.

The move is being described as a “preventive measure” so that the virus cannot spread further in Germany. The decision reportedly was made jointly by Leipzig mayor Burkhard Jung, the health department, and the trade fair, said the spokesman to Frankfurter Allgemeine.

On the site of the public-facing fair, a simple message reads “The Leipzig Book Fair 2o20 is not taking place.”

Last year, press reports indicate, around 286,000 visitors and more than 2,500 exhibitors from 46 countries were at the Leipzig fair. At the same time, Europe’s largest reading festival “Leipzig Reads” takes place in hundreds of places across the city—much as with Frankfurter Buchmesse’s BookFest in October.

At the Berlin Spectator, Imanuel Marcus is reporting that 10 of the 16 federal states of Germany now have reported coronavirus cases, with a total for Germany around 150. Most recently, Berlin has registered its first case.

We have opened a separate story on the faster-moving updates for today, led by the worldwide system of Penguin Random house pulling out. Please see that story here. Our earlier morning reporting on the London situation remains below.

I suspect the government's announcement this morning will include a ban on gatherings of over 5k people or similar, and then it will be off. @LondonBookFair will be waiting until then to pull the plug for insurance. Hold off until the end of the day!

LBF “Still On,” Hachette Livre and Hachette UK Are Out

France’s major publishing group Hachette Livre has canceled its London Book Fair participation, the latest in a fast-mounting slate of pullouts from the industry-facing trade show scheduled to open one week from today. That cancellation includes a pullout of the Hachette UK staff, potentially a harbinger of more majors in London stepping back from the show—which normally draws up to 20,000 industry professionals.

At The Bookseller, Mark Chandler and Benedicte Page report that Monday’s (March 2) meeting of organizers—from whom some had expected to hear a closure announcement—instead has produced yet another “still on” stance from Reed Exhibitions.

Remarkably, this comes as Boris Johnson is reported by BBC News to have told the nation that up to a fifth of its workforce may be out sick during the peak of a coronavirus epidemic there.

“The government’s response is in its first stage – containing the outbreak – with the number of UK cases rising from 39 to 51 on Tuesday,” BBC’s update staffers write. “If the virus becomes widespread, some non-urgent hospital care may be delayed to focus on treating those who are infected, while recently retired doctors and nurses may be called back to work. Other possible measures include school closures, reducing large-scale gatherings and working from home.”

What Reed is widely perceived by industry observers in touch with Publishing Perspectives to be watching for is a move from the UK government restricting the size of public gatherings to help prevent the spread of the deadly virus. This, say many in the industry, would then create the force majeure rationale for closing the event, which presumably would be advantageous to the company in its insurance claims. One London publisher, speaking to us on condition of anonymity, says that the loss of the 2020 London Book Fair could have considerable impact on Reed.

In Paris, it’s the government’s order than no public gathering bigger than 5,000 people can go forward that has triggered the reported effective cancellation of the Salon du Livre de Paris, a corollary to what’s expected to occur in London if a similar restriction is ordered. (In Switzerland, Bern has limited crowds to 1,000.)

But, the Boris Johnson government has issued its awaited action plan without an immediate enactment of such an order.

The Bookseller staff writes (italics ours), “The government has issued its coronavirus action plan, emphasizing that it is currently in the ‘Contain’ phase of the outbreak while planning for the ‘Delay’ phase. Action that would be considered in the Delay phase could include reducing the number of larger scale gatherings and encouraging greater home working. ”

And in a statement from Paris, Hachette’s media messaging reads, in part, “We have a duty of care to our staff, and, after careful discussion and reflection, no one from Hachette Livre will be attending the London International Book Fair, including staff from Hachette UK.”

Also in the UK, Jamie Byng’s Edinburgh-based independent powerhouse Canongate has withdrawn, the publisher saying, “It’s with regret that we took the decision this morning not to attend this year’s London Book Fair. But we also felt that this was the responsible course of action, given the current situation.”

It makes no sense to continue but perhaps LBF and other commercial fair organisers are waiting for government instructions so they can claim on their business interruption insurance. https://t.co/0H6miup8ty