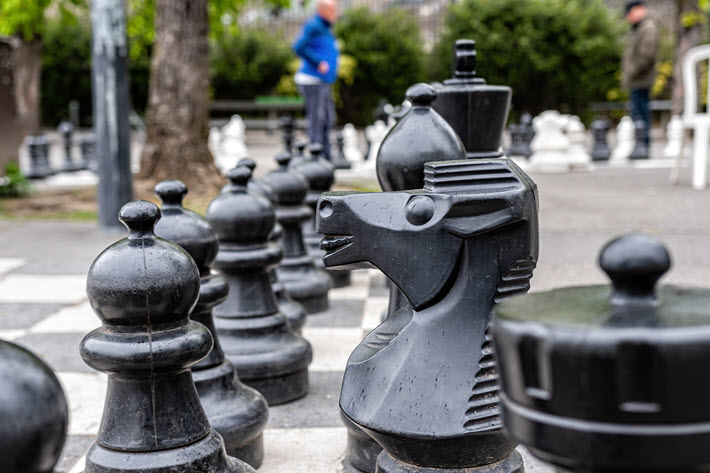 Capturing resource guidance on the COVID-19 pandemic’s effects on publishing in international markets, the IPA’s listing has begun tracking input from its member-associations.

A giant chess board in a March 20 photo taken at a nearly empty Bastions Park in Geneva, where the International Publishers Association is based. Image – iStockphoto: Askolds

A Policy-Driven Approach to Pressures on Publishing

Relative to the Italian creative industries’ concerted appeal to Rome for stabilization amid devastating losses, publishing associations in many parts of the world are working to establish their best paths forward during the coronavirus COVID-19 pandemic.

At this writing, the Johns Hopkins Coronavirus Resource Center is approaching three quarters of a million identified cases worldwide, the number standing at 732,153. The international death toll: 34,686.

As Publishing Perspectives readers know, the International Publishers Association is based in Geneva, and the IPA’s 83 member-associations come from 69 countries in Africa, Asia, Australia and New Zealand, Europe, and the Americas. Amid the spread of the contagion, the association was compelled earlier this month to cancel its biennial International Publishers Congress in Lillehammer, originally set for the end of May.

There’s a growing body of publishing industry resource listings and hubs, of course, many of which we’re covering as they gain traction.

In the case of the IPA’s “Publishers Act Amid COVID-19 Pandemic” compilation—opened on Thursday (March 26) and flagged to us for today’s report (March 30)—the effort is to look at various markets’ and regions’ approaches to the economic struggles encountered by the world publishing industry and, in some cases, the creative industries that lie near to the book business in many cultures.

“Self-isolation around the world has seen a boom in reading. We will need books and we will need each other.”Hugo Setzer, IPA

“Many parts of the industry,” at the international scale, writes the association’s staff, “want to know whether culture or publishing will be supported by national stimulus packages.

“The closures of bookshops, cancellations of book fairs, and general uncertainty” propelled by the pandemic, “is putting many parts of the publishing industry under great pressure, with many counting on government economic stimulus packages to help them survive the economic crisis resulting from the health crisis.”

And Hugo Setzer, the IPA’s president, says, “Self-isolation around the world has seen a boom in reading.

“Books and reading are the ideal way of escaping our four walls but also to understand what is happening around us, how to overcome this and how to make our lives better in the future.

“We will need books and we will need each other. The International Publishers Association will play its role to support our international colleagues, our authors and readers, our researchers, our teachers and pupils, to overcome this crisis.” 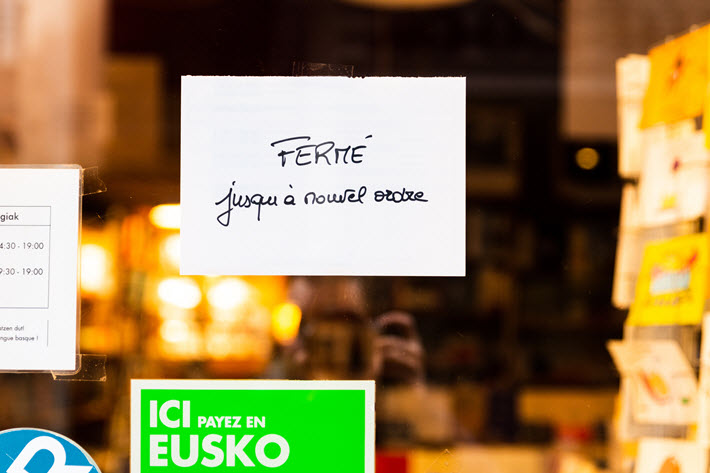 A bookstore in Bayonne, France, has a sign on its door: ‘Closed until further notice.’ Image – iStockphoto: Dutour Dumonde

Of course, at the root of many of the questions underlying various levels and forms of governmental support is the issue of “essential” business, products, and services. The onslaught of the viral spread has prompted an understandable scramble to attain “essential business” designations from local and national governments. In most cases, such a designation can offer varying options for fiscal support, and/or the right to stay open for business—often in modified formats—during lockdown and quarantine orders.

Mike Dougherty at the Rockland-Westchester Journal News—at the much discussed center of New York state’s original cluster of cases, you may recall—reported on Saturday (March 28), “In New York’s Westchester County, six county-owned golf courses remained open Thursday while public health officials urged residents to stay home.” In that instance, proponents insist that “the mental stamina” to handle #StayAtHome orders requires access to such options as a round of golf in which golfers may be limited to one per cart or to walkers only. Dougherty’s story was carried by Golfweek.

On Sunday (March 29), BBC News reported that the island of Guernsey had issued new guidance: “Restaurants, cafes, takeaways, kiosks, retail hardware, office product and IT stores, and vehicle repair shops are no longer allowed to operate,” the BBC coronavirus updates team wrote. Businesses not on the island’s banned list can continue to operate but with a maximum two persons on their premises at any one time.

As Alex Green reported Thursday at Publishers Weekly on the American situation, many bookstores have applied to their local authorities for exemptions to closure orders as “essential.”

That, of course, sets up an unavoidable new tension between physical bookstores and online retail. Like many products, books do not have to be physically obtained in bookshop settings, and in some markets are sold more frequently online than in those stores. The comparative safety of online shopping—whether for digital formats or for paperbacks and hardcovers to be delivered—presents a strong argument to close physical bookstores, though the value of those bookstores to the industry and to many consumers isn’t in question.

That, in turn, however, means that the publishing supply chain needs to look for governmental support, if available, for the inevitable and potentially existential damage the emergency may inflict on bookselling outlets as on so many other businesses in any market of the world.

For example, in the United States on Saturday (March 28), “Homeland Security added gun dealers, shooting ranges, and manufacturers to its essential business coronavirus-response guide,” as Stephen Gutowski reports at the Washington Free Beacon. Those industry workers, Gutowski writes, “are listed under the designation for ‘law enforcement, public safety, and other first responders.” 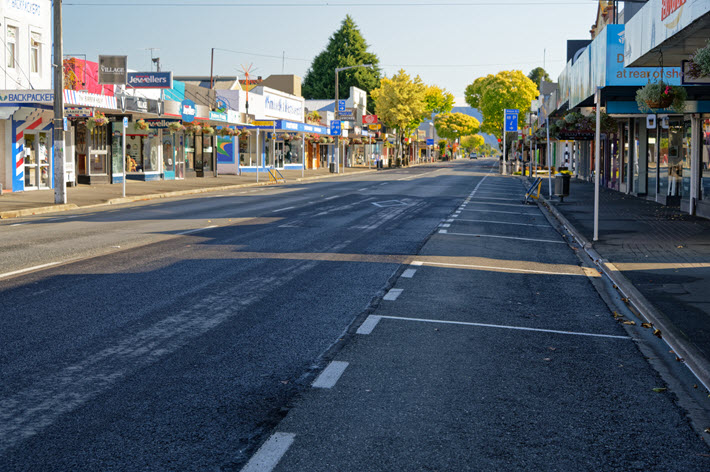 On New Zealand’s South Island, the main street in the town of Motueka is deserted on March 29 amid business closures in the COVID-19 pandemic. Image – iStockphoto: Anne Webber

At the IPA, some of the highlights of the list–which staff is updating– include these.

In most cases, the IPA’s listings take the form of a line or two of explanation about action on the ground in a given market, with a link to learn more.

The staff also makes the point that copyright is fundamental to the fact of this content’s availability. The team writes, “Without copyright, these materials would not have been produced, because neither authors nor publishers would have had any incentive to invest time and money in them.

“And now, in these extraordinary circumstances, authors and publishers are exercising their rights to make their products available and therefore living up to the challenge.

We urge the international family of publishers associations and organizations to establish a link with the International Publishers Association’s listings so that the world industry can quickly find information on a given national market’s situation. To propose your market’s listing inclusions to the IPA staff, send a message to Taylor@InternationalPublishers.org

More from us on the International Publishers Association is here. And More from Publishing Perspectives on the coronavirus outbreak is here.