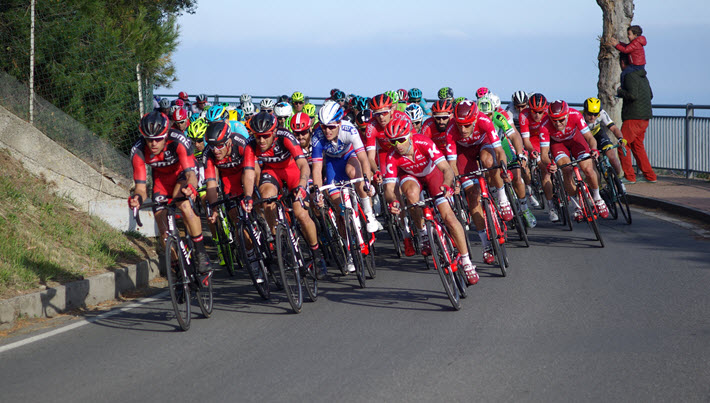 The creative industries of hard-hit Italy—including the books industry—are alerting the government that they could suffer structural damage in the current crisis.

BBC News on March 6 reports that the Milan-San Remo race is being postponed amid the coronavirus outbreak, as Italy’s creative industries warn of financial collapse without economic relief. Image – iStockphoto: Surkov Dimitri

An Urgent Call for ‘Protection of These Assets’

With so much industry attention necessarily devoted to the cancellation of London Book Fair this week, the worst of Europe’s coronavirus COVID-19 outbreaks in Italy hasn’t always stayed in sharp focus for everyone.

Today (March 6), a coordinated message is going to world news media from Rome in the form of an appeal that represents the Association of Italian Publishers (Associazione Italiana Editori, AIE) as well as the powerful Italian cinema and audiovisual associations (ANICA, APA, UNIVIDEO), along with the heritage-promotional agency AICC.

Led by Innocenzo Cipolletta, president of the Confindustria Italian Culture (ICC), a letter—essentially a cry for help—is going to the Italian prime minister, Giuseppe Conte, as well as Roberto Gualtieri, the minister of finance; Dario Franceschini, the culture and tourism minister; and Stefano Patuanelli, the economic development ministry. The Confindustria functions largely as the national chamber of commerce for these cultural and other industries.

“The effects of the spread of the virus on companies and workers in the cultural industries,” writes Cipolletta, “is significant and troubling.”

On Monday (March 2), the publishers’ association made an offer to the Italian school system to provide virtual teaching platforms and digital content free of charge to educators who need to use virtual classes for their students. The association as pointed out that a side benefit of this could be the chance to test and prove the viability of some of the available systems.

And at the end of February, the association—speaking for 231 imprints and 86 publishing houses—backed a request to the government to delay the implementation of the country’s new book laws rather than risking disrupting the supply chain during the current public health emergency.

Now, Cipolletta’s litany of deeply concerning effects should signal to other markets of the world what well may be ahead, should the viral spread continue at the pace and potential penetration seen so far.

Italy Has a Reported 3,800 Infections 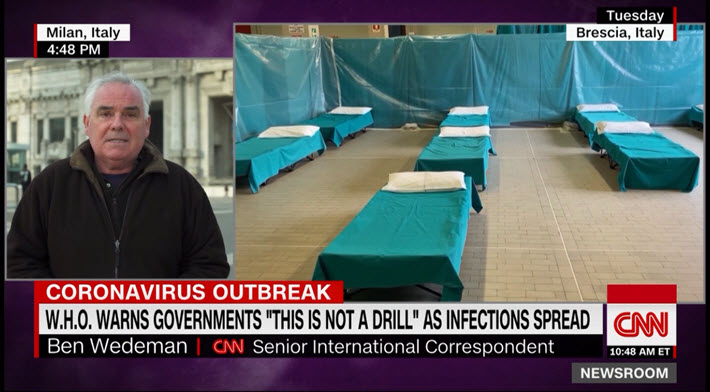 In an update at 11 a.m. ET March 6, 4 p.m. GMT, CNN International’s Ben Wedeman reports from Milan that the government says the Italian health care system–considered one of the best in Europe–is in danger of being overwhelmed in the coronavirus outbreak response. Image: CNN Newsroom

To bring you up to date, CNBC’s Silvia Amaro is reporting this morning that more than 3,800 people are confirmed to have been infected, with the death toll late on Thursday (March 5) reaching 148. Italy has announced an infusion of €7.5 billion (US$8.4 billion) in assistance, and that’s twice the originally budgeted amount.

As Publishing Perspectives readers know, it’s the initial, devastating outbreak southeast of Milan that put more than 50,000 people in 12 towns into lockdown last month and triggered the postponement of the 30,000-person publishing trade show, Bologna Children’s Book Fair. That event—moving the Bologna event to May 4 to 7—is the first event that really focused world publishing on the mounting problem, with the specter of the London Book Fair’s eventual derailment coming into view.

As the government in Rome warns of a higher than expected 2020 deficit, Amaro reports that Berenberg Bank analysts are warning of a recession, not just for Italy but also in Germany and Japan.

And as for the book publishing industry and related creative industries in Italy, Cipolletta’s message goes on:

“The sharp decline in sales of cultural products—books, music, and DVDs—and the cancellation of concerts; the cancellation of exhibitions and cultural tours with attendance in the museums less than 20 percent of the usual crowds;  the cancellation of festivals and exhibitions; the closures of cinemas; the suspensions of national and international audiovisual productions in general; and the freezing of already planned activities or initiatives … all are generating in fact very significant economic damage throughout the nation, changing investments and the development of our industries for this year and probably also for those to come, and creating a liquidity crisis for companies in the sector.”

Several benchmarks are being provided to us by the team that handles communications for the publishers association. Note that in the books sector, the Italian consumers do much of their purchasing in physical bookstores, which of course are deeply impacted when people are sheltering inside–and stores may not have normal opening hours.

“What cultural enterprises are facing now,” says Cipolletta in his urgent media messaging, “has the character of a real disaster, like what is happening to many other companies operating in Italy.”

He warns that the crisis may cause structural damage with a risk of warping a strategic business part of the country’s future. “Protection of these assets, the dissemination of our culture, is essential not only for the Italian economy but also for our quality of life”—which, of course, is part of the unique attraction the country has for international tourism.

“This must be addressed on an emergency basis, as a full part of the crisis facing the Italian system and with urgent measures to limit short- and medium-term damage.”

The Confindustria Italian Culture is calling on the government to temporarily suspend the creative industries’ payments of social security contributions and taxes. It also is asking for new loans and favorable credit extensions from the banking system and expedited payments of public subsidies.

Meanwhile, in the latest demonstration of the sort of cultural disruption under way, the BBC reports that the Milan-San Remo cycling race is to be postponed–with no new date as yet. the event is a cultural institution established in 1907.

The race this year was to have been ridden on March 21. The Tirreno-Adriatica and Il Giro di Sicilia have been canceled.

More of Publishing Perspectives’ extensive coverage of the coronavirus outbreak and its effects on international publishing is here. More from us on the Bologna Children’s Book Fair is here and more on the Italian market is here.