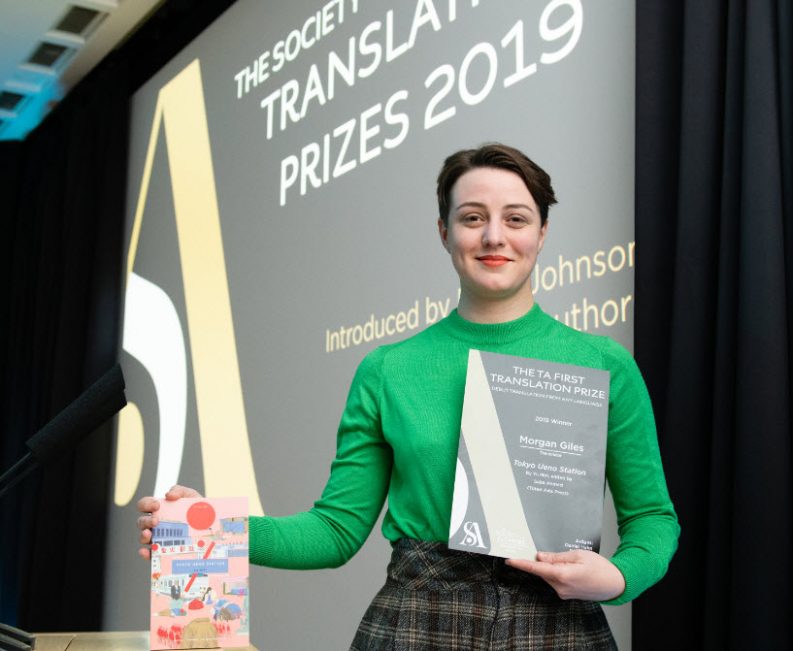 The program honoring 2019 winners of the Society of Authors-administered Translation Prizes was held at the British Library.

‘The Soft Power of Diverse Cultures’

At a ceremony last evening (February 12) at London’s British Library Knowledge Centre, the Society of Authors announced eight prizes in translation with purses totaling £20,000 (US$26,048).

While the clearest thing for all our many awards competitions in the world industry would be to date prizes by the year in which they’re handed out, this is a program that dates its honors by the previous year. And so it is that these are the 2019 Translation Prizes from the society, although they’ve been presented in the second month of 2020.

As Publishing Perspectives readers will recall, shortlists were announced in December in this clutch of awards administered by the society. The award ceremony last evening was sponsored by the Authors’ Licensing and Collecting Society.

The lead in the society’s busy prizes and awards program, Paula Johnson spoke at the event of “the soft power of diverse cultures, amid the particular miracles that translation can deliver.” 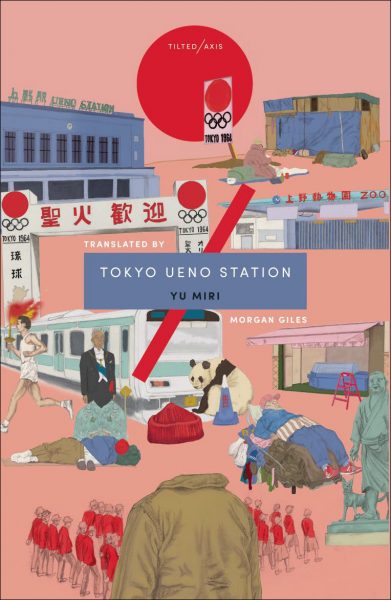 Of special interest to us is the TA First Translation Prize established by translator Daniel Hahn with his own winnings from the 2017 Dublin Literary Award and supported by the British Council. This is the third year the award is being conferred and it has the special decency of dividing its honor and winnings between a translator and her or his editor.

The 2019 TA First Translation Prize has gone to Morgan Giles and editor Saba Ahmed for the English translation from Japanese of Tokyo Ueno Station by Yu Miri (Tilted Axis Press).

Jurors for this prize—Hahn, Shaun Whiteside, and Ellie Steel—said in their rationale, “‘This novel is devastating, both complex and simple, a study of forgotten lives and a portrait of a city, building to a wrenching and unforgettable conclusion. A marvelous book, beautifully written and beautifully translated.”

Runners-up for this prize are Charlotte Whittle for a translation of People in the Room by Norah Lange and editor Bella Bosworth from the publisher named And Other Stories, a book translated from Spanish. 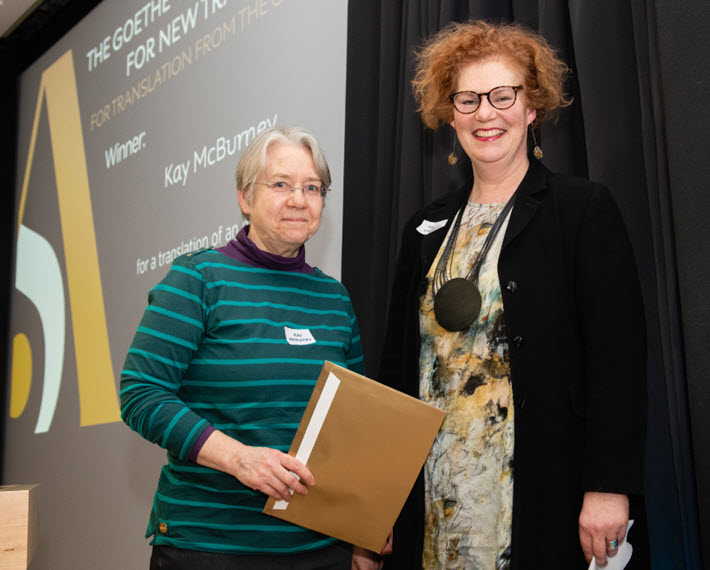 The Goethe-Institut Award, presented since 2010, is a biennial award for translation from a chosen text, this year Die Fahrt by Sibylle Berg. The winner is invited to attend the Leipzig Book Fair, and to the International Translators’ meeting in Berlin. Jurors this year in this prize are Oliver Kamm, Karen Leeder, and Charlotte Ryland.

The winner in this prize is Kay McBurney for her translation of an extract from the Berg book.

In a comment on the work, juror Kamm is quoted, saying, “A lucid and engaging style that encapsulates what literary translation should be: it reads like an original text and not a translation.”

Leeder says “This translation is not simply sure-footed: the translator has a fantastic ear for the rhythms of speech and a real gift for capturing the wry humor of the original.”

And Ryland is quoted, saying, “I thoroughly enjoyed reading this spirited and confident translation, full of felicitous turns of phrase and with a great sense for Berg’s humor.”

The Schlegel-Tieck Prize  has been awarded annually since 1965 and takes its name from two great poets of the Romantic period. August Wilhelm Schlegel and his friend Ludwig Tieck, also a noted translator. This year’s judges were Emily Jeremiah and Caroline Summers.

Iain Galbraith has won the award for his translation of River by Esther Kinsky (Fitzcarraldo Editions).

For the jury panel, Jeremiah said, “Galbraith’s translation is meticulous but it also allows the text to meander and breathe as it should. He captures the distinctive sensibility of this work, with its movements back and forth in time, and through and between landscapes, with poetry and insight—a marvelous accomplishment.” 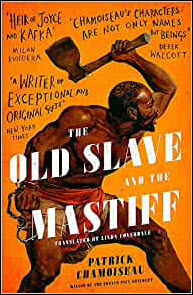 The Scott Moncrief Prize is awarded to translations into English of full-length French works, this year juried by Susan Harrow and Sudhir Hazareesingh.

Linda Coverdale has won this prize for her translation of The Old Slave and the Mastiff  by Patrick Chamoiseau (Dialogue Books), with juror Hazareesingh saying, “The challenges of translating such a complex work were numerous, and Linda Coverdale overcomes them all to convey fully the range and emotional depth of this remarkable novel.”

The Scott Moncrieff is sponsored by the Institut français du Royaume-Uni, ALCS and the Society of Authors. 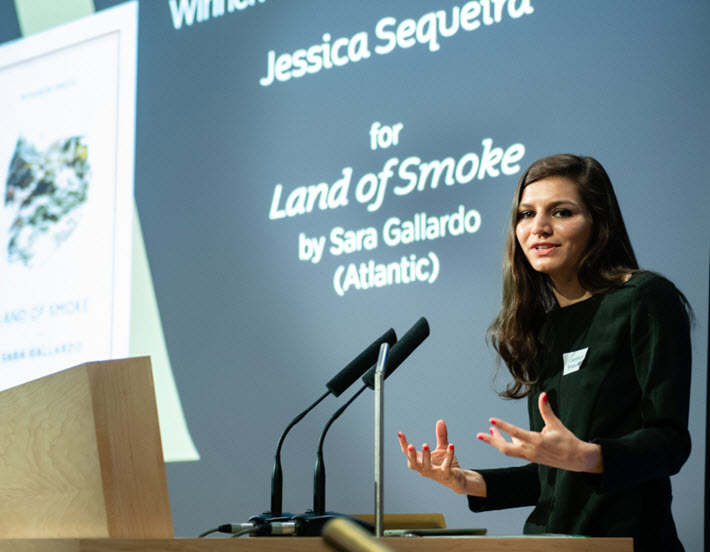 Translator Jessica Sequeira is the winner of the Premio Valle Inclán for translation from Spanish. Image: SoA, Adrian Pope

The Premio Valle Inclán Prize honors translations into English of full-length Spanish-language works, and is judged by Peter Bush and Laura Lonsdale.

Its winner is Jessica Sequeira for her translation of Land of Smoke by Sara Gallardo from Pushkin Press.

In a comment, Lonsdale is quoted, saying, “This volume of short stories marks an important rediscovery…Jessica Sequeira’s sensitive translation captures the rawness and strangeness, brevity and lightness of Gallardo’s prose, allowing both the humour and pathos of the stories’ dreamy, disconnected, yet very human situations to shine through.”

In this case, there’s also a runner-up named, Sophie Hughes for her translation of The Remainder by Alia Trabucco Zeran (And Other Stories). 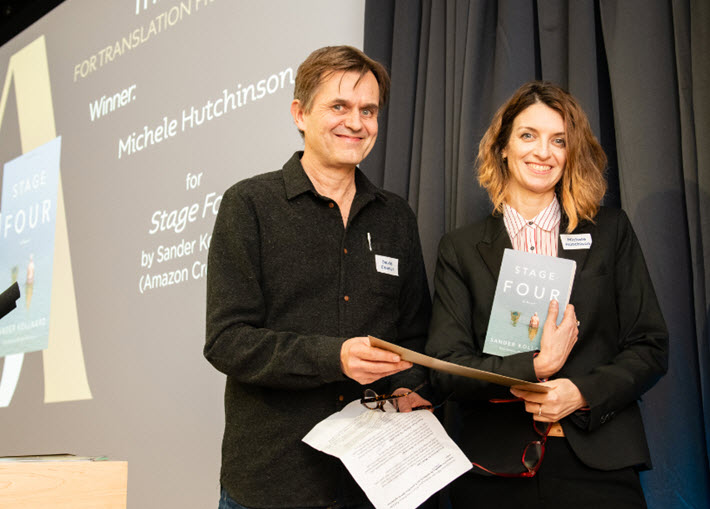 With its purse sponsored by the Dutch Foundation for Literature, the Vondel is presented biennially for translation into English of a full-length Dutch-language work. It’s judged this year by David Colmer, Jane Draycott, and Anthony Paul.

Michele Hutchison is the winner of this prize for her translation of Stage Four by Sander Kollaard, published by Amazon Crossing, the translation imprint of the Amazon Publishing group.

In a comment, the jury said, “Hutchison captures Kollaard’s humane and searching portrait of a marriage with an elegance and sensitivity which seem a perfect match for the novel’s psychological delicacy and sense of scene. In her consistent alertness to tone and phrasing, Hutchison has achieved a translation of fine insight and poetic attentiveness.”

David Doherty is named runner-up in this prize for his translation of Monte Carlo by Peter Terrin (MacLehose Press). 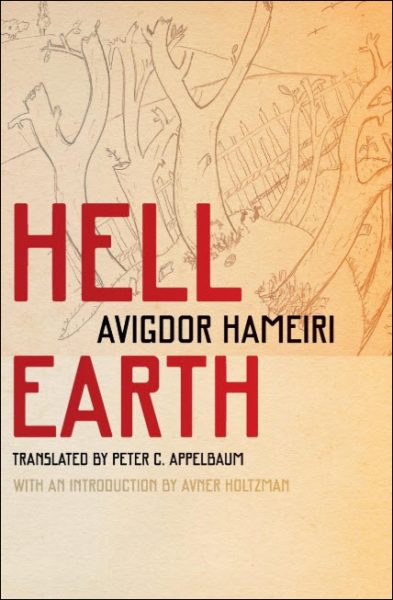 The TLS-Risa Domb/Porjes Prize‘s purse is sponsored by the Porjes Trust and administered by the Jewish Book Council in association with the Society of Authors and the Times Literary Supplement. It’s awarded triennially and recognizes translation into English of a full-length work of either fiction or nonfiction in Hebrew. This cycle’s judges are Boyd Tonkin, Tsila Ratner, and Yaron Peleg.

The winner of the prize is Peter C. Appelbaum for his translation of Hell on Earth by Avigdor Hameiri (Wayne State University Press).

For the jury, Tonkin is quoted, saying, “Avigdor Hameiri depicts shocking hardship and cruelty—tempered by compassion—among captors and captives in prose that has a visceral power and raw vigor. In Peter Appelbaum’s version, it rises too to peaks of poetic intensity.” 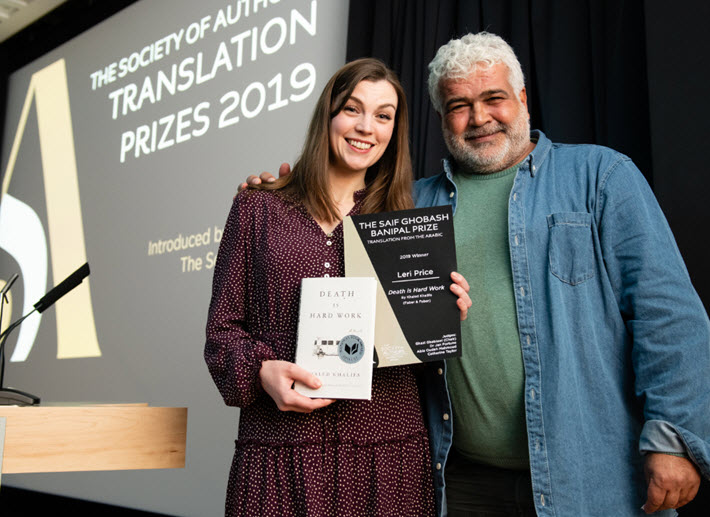 As we reported last month, the 2019 Banipal Prize for Arabic Literary Translation has been won by Leri Price for the translation to English of Death is Hard Work by Khaled Khalifa (Faber & Faber). This book was also a finalist for the US National Book Awards.

The prize holds the distinction of being the first for work created in Arabic and translated into English. Its first prize was made in 2006. The award is sponsored by Omar Saif Ghobash and his family in memory of his father, the late Saif Ghobash.

In addition to Price’s work on the Khalifa book, the shortlist included:

More from Publishing Perspectives on translation is here. More from us on publishing and book awards programs is here, and more on the UK market is here.