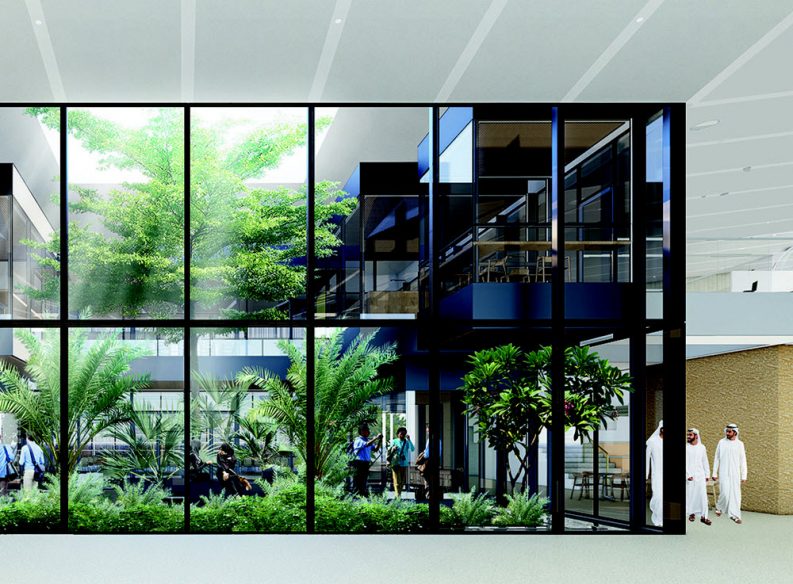 Set for completion in April, Sharjah’s new House of Wisdom facility is designed to bring legacy and digital library services together with a concept of social learning and cultural interaction. 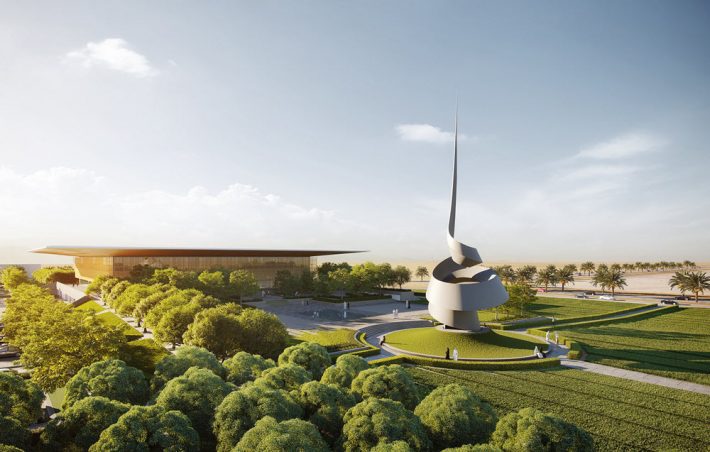 As observances were underway last spring for the opening of Sharjah’s year as the first Gulf venue to be made a UNESCO World Book Capital, the emirate’s ruler, the Sheikh Dr. Sultan Bin Mohammed Al Qasimi unveiled a commemorative 79-ton sculpture, The Scroll, by the British artist Gerry Judah.

Its installation near Sharjah’s University City now is flanked by an ambitious project, the advanced construction of a 12,000-square-meter library and “social learning hub,” scheduled to open in April of this year as a lasting tribute to the emirate’s year as World Book Capital.

Called the House of Wisdom, the structure today (February 2) has been reported to be 60-percent complete and will house more than 105,000 books as well as digital resources, a “reimagining of libraries for the 21st century.

‘A Melting Pot of World Cultures’ 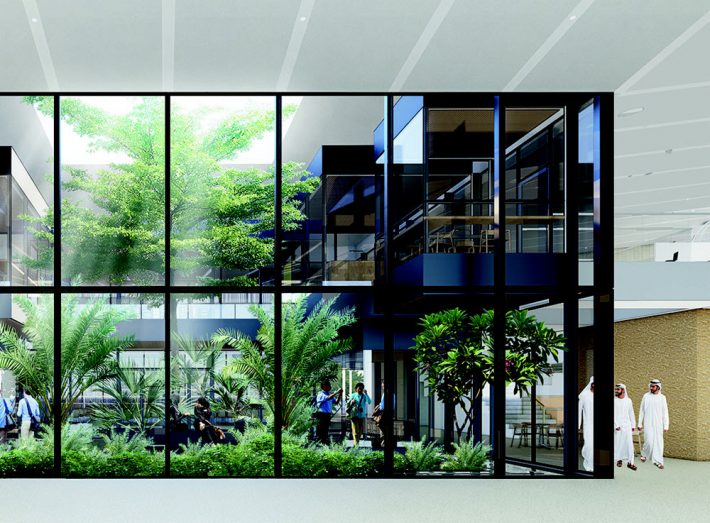 Landscaped gardens inside the House of Wisdom are conceived to include suspended spaces for reading and study. Image: Foster + Partners, Shurooq

In today’s announcement, Sharjah-based publisher Bodour Al Qasimi, who heads the emirate’s World Book Capital advisory committee and is vice-president of the International Publishers Association (IPA), pointed to the to the new facility’s alignment with her father’s vision for a knowledge-based culture.

At a ceremony introducing the project, Bodour said, “Sharjah was founded on pillars of literature, education and a strong passion for harnessing intellectual creativity–whether local, regional, or global.

“The House of Wisdom project is a new cultural milestone, and has strengthened Sharjah’s position as a melting pot of world cultures in the region. The ethos behind this library are the same ones that guide Sharjah’s development process, and proves once more, that the sustainability and growth of any nation can only be ensured by promoting continuous opportunities for learning and gaining knowledge.”

A key concept in the new center’s development is of cross-cultural interaction–as reported by Shurooq–”between individuals, families, [and] friends from diverse backgrounds, as they explore abundant knowledge sources, engage with others in a welcoming and social environment, and fuel their passion for reading, gaining a new life experience at this futuristic library.”

The executive chair of Shurooq, Marwan Al Sarkal, also spoke at the event today, stressed that the combination of digital and legacy library resources and the center’s social construct will enable new channels of learning for visitors.

“Built in keeping with the fast-changing world of technology,” Al Sarkal said, “the House of Wisdom is being designed to stimulate a new way of reading and knowledge exploration–with increased focus on collaborative learning spaces.”

The two-story structure, he said, will include discussion halls, reading lounges, exhibition spaces, a dedicated children’s educational area, suspended pod spaces above a central courtyard for quiet reading, a café and a restaurant, and landscaped gardens. 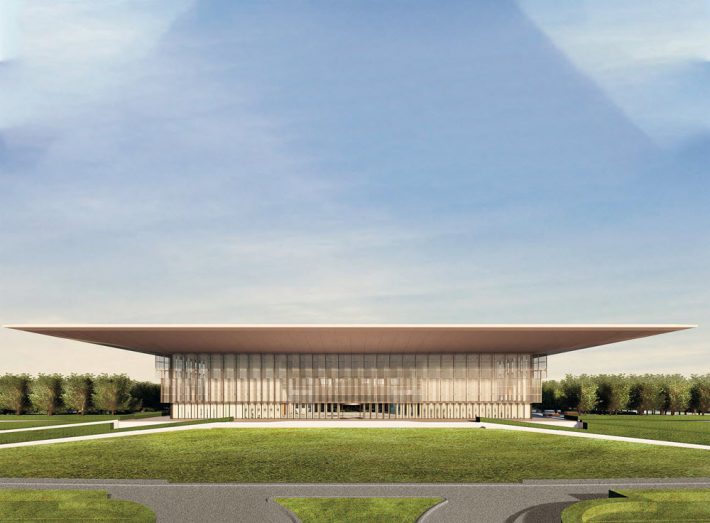 A forward view conceptualization of the House of Wisdom. Image: Foster + Partners, Shurooq

And in media messaging, the mission of the Shurooq program is described as being “to achieve social, cultural, environmental, and economic development on the basis of Sharjah’s distinct Arab and Islamic culture and to seamlessly add to the fabric of the emirate.

“It strives to develop the emirate and encourage investment by adopting the best international standards in providing high-end services that help draw local, regional and international investment.”

‘The Fabric of the Emirate’ 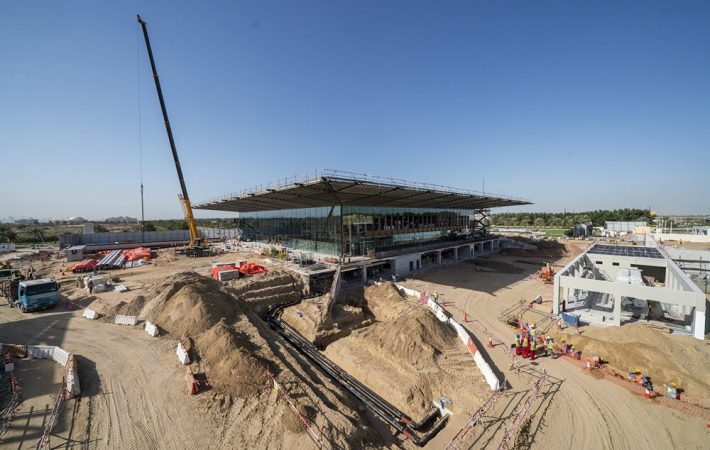 The House of Wisdom at Sharjah’s University City is reported to be 60 percent complete in February (2020). Image: Shurooq

Readers of Publishing Perspectives will recognize the Al Qasimi royal family’s longstanding interest in libraries as important centers of reading’s place in the ideal culture.

In December, Bodour announced that the World Book Capital program is backing the work of Kenya’s Book Bunk Trust, in its restoration of Nairobi’s McMillan Memorial Library and two outlying branch facilities.

And in the previous year, Sharjah’s gift to the city of Conakry, Guinea, the 2017 World Book Capital, was the rebuilding of the historic Tamsir Niane library, which had been badly damaged in a 2012 fire.  In that case, funding for the project was led by Sheikh Sultan, an author and scholar in his own right.

“These are the sorts of initiatives we hoped would bloom” when the IPA first outlined the approach.

And, as we’ve reported, Bodour led a delegation from Sharjah to Athens in 2018, as the Greek capital began its year as UNESCO’s designee.

Kuala Lumpur is to take the baton from Sharjah in April as the 2020 World Book Capital, and Tbilisi has been named the honored city for 2021.

Applications for the 2022 World Book Capital now are being accepted, by UNESCO in Paris, with a deadline for submission of June 25. More details about applying are here.

The House of Wisdom in Sharjah under construction for its April (2020) opening. To the left is the Gerry Judah sculpture, ‘The Scroll.’ Image: Shurooq

More from Publishing Perspectives on Sharjah is here, and more on the UNESCO World Book Capital program is here.