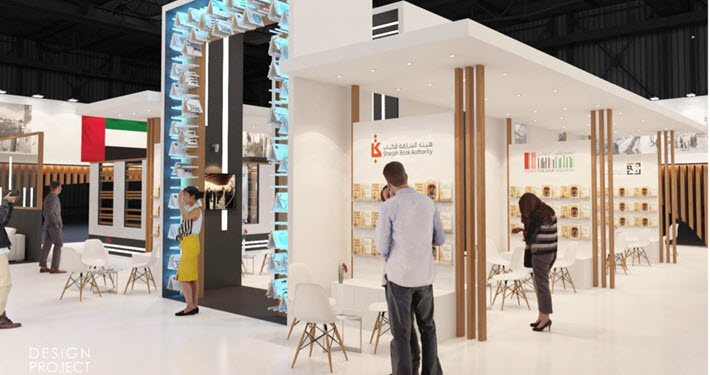 The Sharjah Market Focus program at London Book Fair brings two pavilions to the trade show, as well as a stand featuring this year’s UNESCO World Book Capital designation for the emirate. 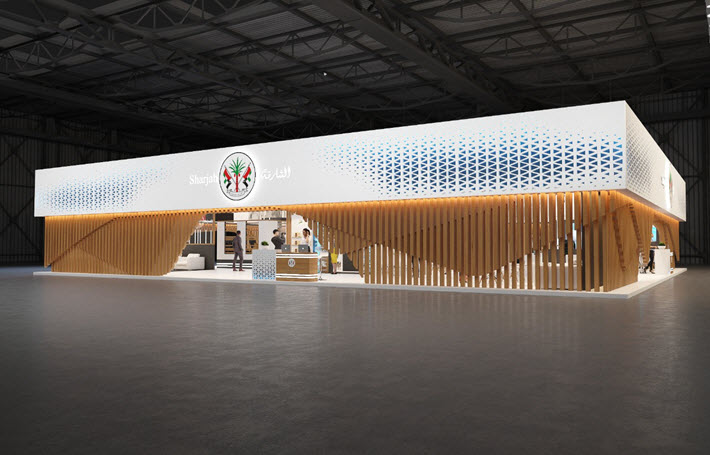 Including its UNESCO World Book Capital stand, Market Focus Sharjah has three exhibition sites for the floor of the 2020 London Book Fair. This one, the main pavilion, capitalizes on the bright white-and-wood motifs found in the Gulf emirate’s outdoor culture. Image: Sharjah Book Authority

‘We’re Everywhere in the World’

Even before the 2 p.m. opening ceremony of Sharjah’s Market Focus at London Book Fair on March 10 with His Highness, the Sheikh Dr. Sultan Bin Mohammed Al Qasimi, fairgoers may well be stopping in their tracks when they see the main pavilion.

Filled with light, the pavilion is designed to hold an evocation of the sun-drenched city’s history, which will be explicated in a smaller pavilion’s presentation of 47 books never before translated into English—one for each of this young state’s existence.

The first city-state to hold London’s Market Focus position—as opposed to a national market—Sharjah is known to many world publishing professionals as an exception to most book-business rules.

Its royal family has spent the better part of four decades building out Sheikh Sultan’s vision of Sharjah as a hub of reading culture for the Arab world and a knowledge economy based in the cultivation of Arabic literature’s place in the world. And it’s for this leadership that London Book Fair and the Publishers Association awarded the Simon Master Chairman’s Award in 2017 to Sheikh Sultan at the International Excellence Awards.

In a chat with Ahmed Al Ameri, chair of Sharjah Book Authority—the agency that executes on the programs that fulfill the Qasimi vision—it becomes apparent that the Market Focus program will feature an extensive program set not only at the fair’s Olympia London but in venues around the city. 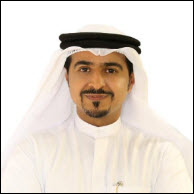 Deep pride lies behind the presentation of Sharjah’s accomplishments headed to London. For background, there’s a white paper offered by the Emirates Publishers Association here that opens with a helpful timeline starting at the founding of the emirate’s independence in 1971.

Of the Arab world’s 370 million people, more than 30 percent is younger than 15 and 20 percent is between 15 and 24 years old, a huge population coming of age at a time when Sharjah means literature.

Nevertheless, this means as much work on the region’s nascent distribution infrastructure and challenges to authors who frequently work without editorial or agent support as it means celebrating literacy and the benefits of reading.

With deep Internet penetration, the region’s young readers are beset, just like their counterparts in the west, with the distractions of digital entertainments and with an overload of options for their time.

Bookstores can be hard to find, piracy is a factor in some sectors, and—even with the unparalleled lead of Sharjah—the Arab region is hardly monolithic: challenges change from culture to culture as do variants in the language.

“It used to be said,” he says in our interview with a laugh, “that ‘Egypt writes, Beirut prints, and Baghdad reads.’ You know what they say now? “The Arab world writes, Sharjah publishes, the whole world reads.”

More seriously, Al Ameri is well aware that the sheer magnitude of Sharjah’s programs can be daunting, as is understood by publishing pros who attend Al Ameri’s conference and rights-trading market each year in association with the Sharjah International Book Fair. But he’s also clear that the goal requires an extraordinary effort and sustained focus and presence in international publishing events.

“Nobody can say, ‘Why are you in London?’ he says, after so many years of consistent development.

“We’re everywhere in the world.” And that takes a level of effort and drive that few societies can hope to focus on a cultural concept in the contemporary era. 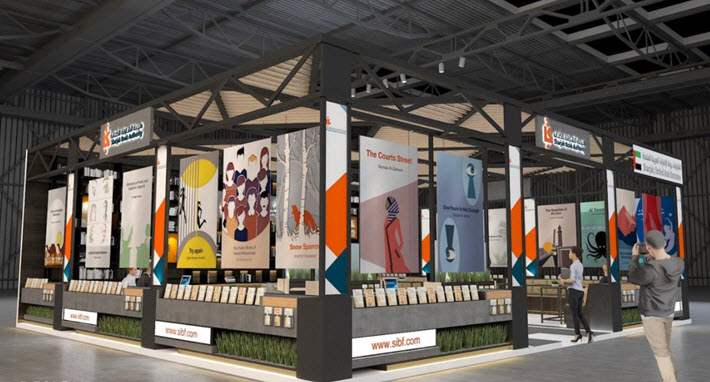 As Publishing Perspectives readers know, the British Council is working with Sharjah Market Focus to take 12 Emirati writers to London for various events. 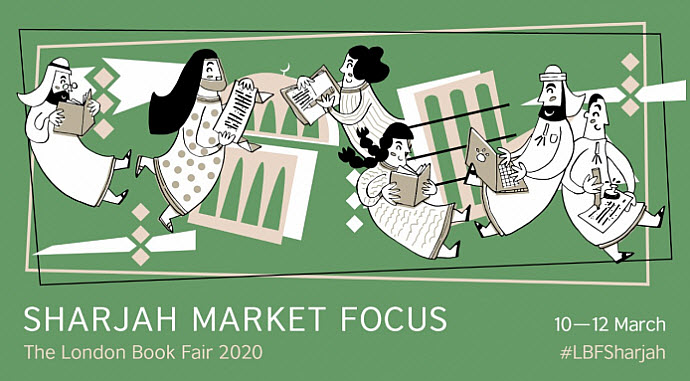 During London Book Fair, just some of Sharjah’s scheduled events include:

One quick way to see Market Focus sessions at London Book Fair’s site is to use this search.

Sharjah as a Culture Immersed in Reading 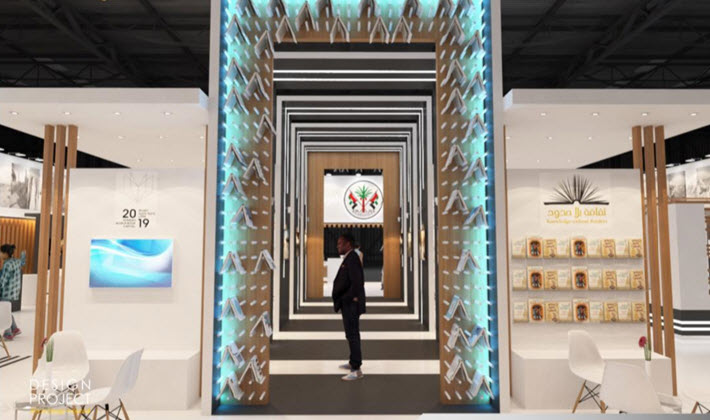 A central corridor, designed to capture perpendicular shafts of light, is at the core of the Market Focus Sharjah main pavilion at the 2020 London Book Fair. Image: Sharjah Book Authority

Sharjah’s arrival at London Book Fair as this year’s Market Focus has behind it a pervasive, sophisticated network of interlocking literary programs and initiatives for the emirate’s citizens. 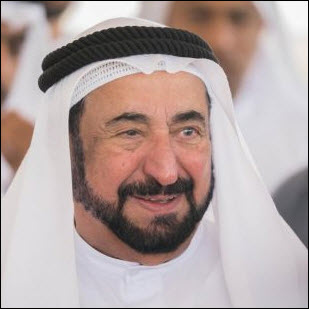 Becoming last April the first Gulf city to be named a World Book Capital by UNESCO, Sharjah has made its slogan Open Books, Open Minds an actionable mantra for the Qasimi concept of international cultural integration through literature. An author of Sharjah’s history, himself, the sheikh will conclude the UNESCO year in April with the opening of his new 12,000-square-meter House of Wisdom facility designed to merge digital library services with social learning.

This builds on the annual Sharjah Children’s Reading Festival and Sharjah International Book Fair (since 1982) programs which, in turn, have led to Al Ameri’s creation of Sharjah Publishing City, the first free trade zone for publishing’s interests. 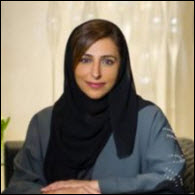 As if this weren’t enough to keep a 90-square-mile emirate busy, Bodour Al Qasimi has dedicated relentless energy to the cause with her father.

Now the vice-president of the International Publishers Association—and spearheading the IPA’s regional conferences programming in Africa and the Middle East—she’s the founding CEO of Kalimat Group, an Arab world standout in children’s literature. She founded the Emirates Publishers Association (EPA) to promote new levels of professionalism in the United Arab Emirates’ book business and supply chain, and that of the Arab region.

Her creation of the Kalimat Foundation has specialized in getting Arabic books to refugee children in almost a dozen countries and also has a program for sight-impaired children—all of which took her to Davos this year to speak to a symposium on philanthropy.

And at London Book Fair a year ago, Bodour created the fast-growing PublisHer women-in-publishing network that will hold its anniversary event at the British Library on the eve of the fair, March 9.

And as Al Ameri finishes up his interview while looking over scheduling for the London Book Fair Market Focus program, he warns, “I can’t tell you anything now, but I’m working on something really big.” 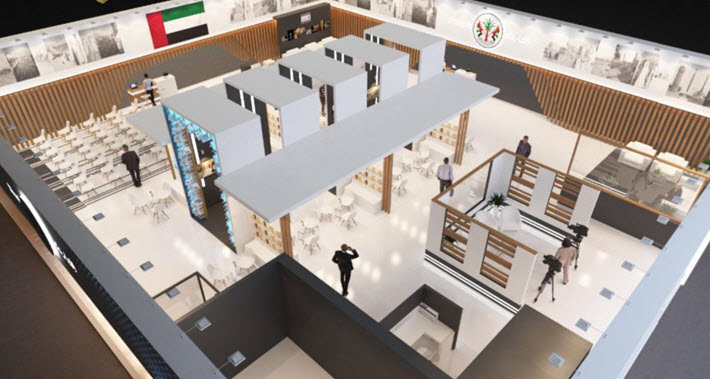 In all our material about the 2020 London Book Fair, we’re taking care to be cognizant of the situation in the UK and elsewhere relative to the coronavirus COVID-19, particularly following the virus-triggered postponement of the Bologna Children’s Book Fair. While London’s fair organizers at this writing say they expect to go forward with the trade show, they’re closely monitoring the situation. Those who plan to attend may find it useful to see the fair’s coronavirus update page for information.

This morning, (February 27), BBC News reports that two new positive cases of the virus have been confirmed in England and have been transferred to National Health Service infection centers in London and Liverpool. “The virus was passed on while they were in Italy and Tenerife,” the report says, citing England’s chief medical officer Chris Whitty. In addition, this afternoon, a new report has a case in Northern Ireland, That’s the first diagnosis there and you can read BBC’s report on it here.

UK ministers report to the BBC that they do expect more cases to emerge.

More from Publishing Perspectives on Sharjah and its publishing programs is here. More from us on London Book Fair is here, and more on the British Council is here.