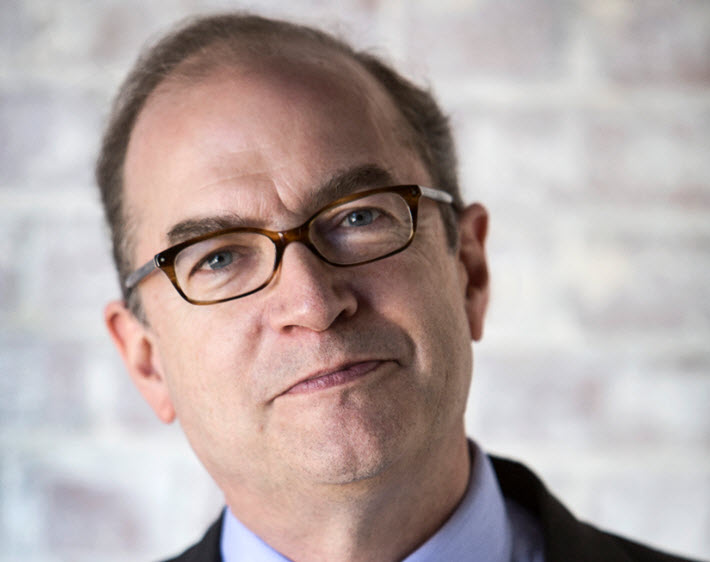 Nigel Newton, founding CEO of Bloomsbury, says publishing ‘works of excellence and originality to a worldwide audience’ has been the guiding goal of the publishing house he founded.

As leaders in world publishing line up to praise him, Nigel Newton, the founding CEO of Bloomsbury, has been named today (February 24) to receive the 2020 London Book Fair Lifetime Achievement Award at the International Excellence Awards on March 10.

Publishing Perspectives readers are familiar with these annual awards provided by the fair and by the UK’s Publishers Association. The complete 2020 shortlist is here.

Newton was born an American in San Francisco, the son of an American mother and an English father, Peter, who was the founder of the Sterling Vineyards and the Newton-branded vineyards in Napa Valley.

He established Bloomsbury—among the most important and prolific of the British independent houses—in 1986. Of all its accomplishments, the house is probably best known as the one that said yes to Jo Rowling for her Harry Potter books, releasing them between 1997 and 2007.

Newton was 31 at the time he founded Bloomsbury with David Reynolds, Liz Calder, Alwan Wherry, and Mike Mayer.

“Many publishing companies have launched in this period but none has achieved what Bloomsbury has done, building a huge commercial success as well as publishing some of the most brilliant and important books of that period.”Charlie Redmayne, HarperCollins UK

The team reportedly had an initial investment of less than £2 million (US$2.6 million). Bloomsbury today is said to have a market capitalization of more than £200 million (US$258 million). The house publishes in both the trade and academic sectors, with some 2,500 titles per year, sales of some £160 million annually (US$206 million), and as many as 750 staffers in offices in London, New York, Oxford, Sydney, and New Delhi. Media messaging indicates new interest on the part of the company in China, as well.

In a prepared statement on the news of his forthcoming award from London Book Fair, Newton is quoted, saying, “It’s a great honor to be given this award. Thank you.

“I’m so grateful to our wonderful authors and to all my colleagues, past and present – in particular David Reynolds, Liz Calder, Alan Wherry and Mike Mayer for their vital parts in Bloomsbury’s start in 1986 and for many years after, helping to confer the publishing values, vision, and entrepreneurial drive of Bloomsbury which remain to this day.

“Bloomsbury’s mission is to be an entrepreneurial, independent publisher of works of excellence and originality to a worldwide audience. Our purpose is to inform, educate, entertain and inspire readers of all ages. We aim to champion a life-long love of reading and learning to help build a reading culture with all the benefits which that brings society, with a particular interest in first-time writers.

“I’m also very grateful to all Bloomsbury employees, authors and illustrators, customer, printers, freelancers, distributors at MDL and MPS, directors, shareholders and fellow publishers and members of the book trade. I’d like to thank the London Book Fair for being the amazing meeting ground of our industry that they are, for championing the importance of literature—and, of course, for this award.”

‘An Eye for Partnerships’ 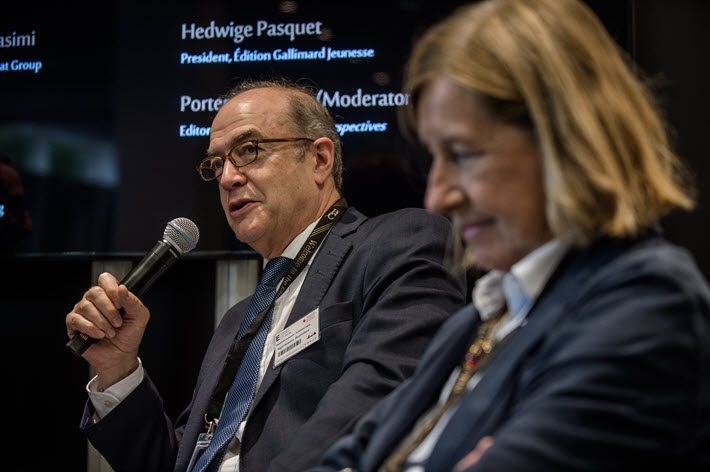 Nigel Newton of Bloomsbury Publishing in London and Hedwige Pasquet of Gallimard Jeunesse in Paris discuss their translation-exchange partnerships with Sharjah’s Kalimat Group in a Publishing Perspectives Talk at Frankfurter Buchmesse in 2017. Image: FBM, Bernd Hartung

Newton is one of the international publishers who has worked with Bodour Al Qasimi, vice-president of the International Publishers Association, in her capacity as the founding publisher and CEO of the Kalimat Group of Sharjah. He arranged with her one of Kalimat’s first translation-exchange programs in which Arabic content from the UAE is published in English by Bloomsbury and content in English is published into the Arab markets by Kalimat.

He joined Bodour and Publishing Perspectives at Frankfurt Buchmesse in 2017 to talk about the arrangement, saying:

At Bloomsbury, early on, we formed a partnership with Microsoft that was tremendously important to us back in about 1999 when we published the Encarta World English Dictionary with them. And so we’ve had an eye for partnerships ever since.

“We’ve also had an interest in Arabic literature, and as we got to know Sheikha Bodour and watched the incredible developments of her publishing house, the idea of a partnership was very attractive and is working very well.

“The benefits of having a series relationship instead of just doing—as much of this book fair is about—just one-off rights deals, is just plain good business.

“So most importantly, we’re thrilled with the books we’ve published under the series. It’s all very well to talk in theory, but I can tell you some titles of what we have taken from Kalimat in Arabic to give you a flavor” of some of the children’s books “we’ve translated into English and published” so far in the partnership with Bloomsbury.

And as London’s organizers are pointing out, Newton has served as president of Book Aid International, a charity program well-known to Publishing Perspectives readers.

He’s also been an extensively engaged member of the advisory committee of Cambridge University Library and a board member of the US-UK Fulbright Commission. He has served as chair of World Book Day; a member of the Booker Prize advisory committee; chairman of the Charleston Trust; a member of the Publishers Association council; a trustee of the International Institute for Strategic Studies; chairman of the British Library Trust; head of the Selwyn Association; and an associate of Newton Vineyard. He has worked, as well, with Cuckmere Haven SOS, a program that works to save the Coastguard cottages.

He’s an honorary doctor of letters with Sussex University and was recently elected an honorary fellow at Selwyn College, Cambridge.

Congratulatory comments are being included from many quarters in messaging to the news media about Newton’s selection for the Lifetime Achievement Award.

Jacks Thomas, director of London Book Fair, is quoted, saying, “Conferring on Nigel the LBF Lifetime Achievement Award is both a pleasure and an honor. His contribution to publishing, both Bloomsbury and beyond, is immense both here and around the globe as the Bloomsbury magic has been exported worldwide.

“From trade to academic, a champion of entrepreneurial publishing, Nigel is behind one of the most interesting independents in UK publishing today. Many congratulations.” 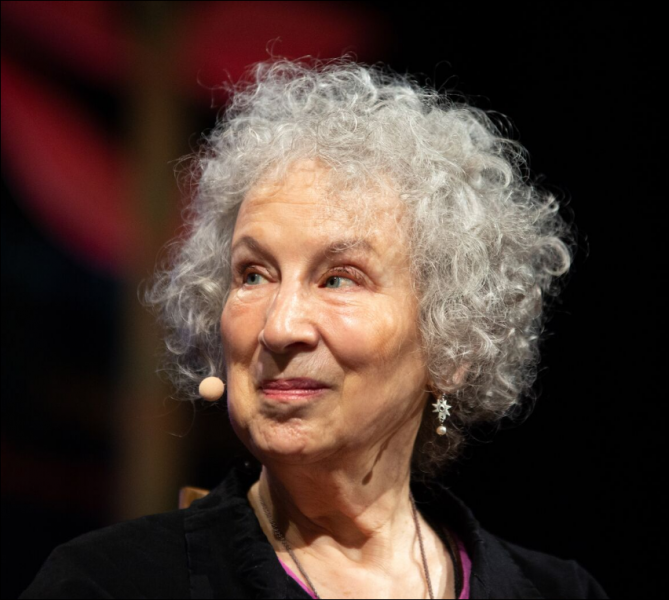 Margaret Atwood says, “In the 1980s Nigel Newton was known as the Boy Wonder because he did something viewed as next to impossible—he started a new publishing company and actually pulled it off. I became a Bloomsbury author through Liz Calder, who’d been my editor at Cape but was head-hunted by the BW, bent on recruiting the best publishing talent he could find. 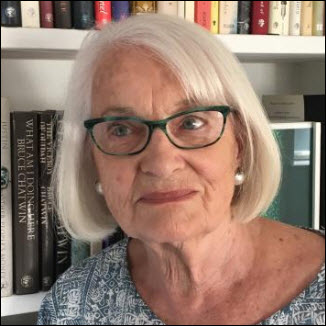 Calder, is quoted, saying, “Nigel’s visionary plan for an independent publishing company in the late 1980s, just when so many independents were being gobbled up by US and European conglomerates, inspired many of us to join ‘The Great Bloomsbury Adventure.’

“And we never looked back. Thank you, Nigel. It was a blast.”

And Charlie Redmayne, CEO of HarperCollins UK, says, “Nigel Newton is one of the most important publishers of the last 30 years. 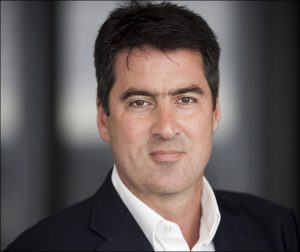 “Many publishing companies have launched in this period but none has achieved what Bloomsbury has done, building a huge commercial success as well as publishing some of the most brilliant and important books of that period.

“He has done all this while remaining one of the nicest guys I know.

“He’s enormous fun and cares deeply for our industry and the work we all do.”

The award is to be given to Newton at the invitation-only awards program by Stefan von Holtzbrinck, CEO of Holtzbrinck Publishing Group.

Past recipients of the International Excellence Awards’ Lifetime Achievement honor include:

The recipient is chosen annually by the London Book Fair advisory board.