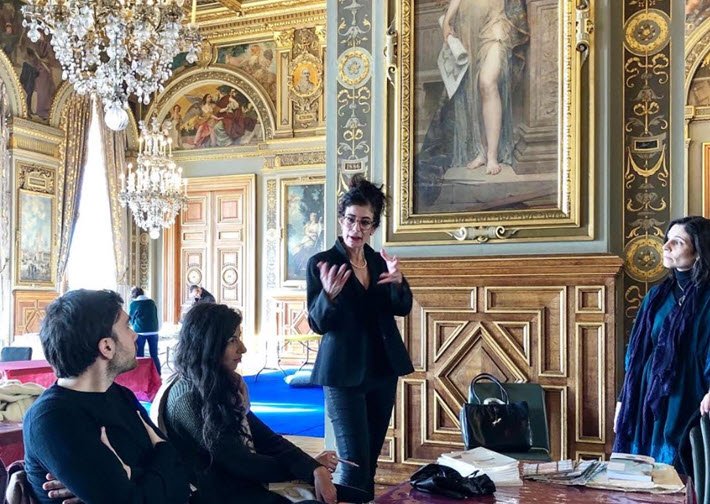 Maghreb Orient des Livres, the annual Paris-based festival of literature from the Maghreb and wider Middle East, is growing yearly. 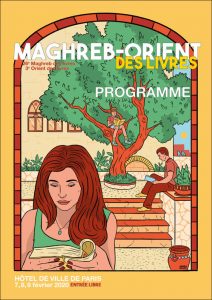 As Publishing Perspectives readers know, the Maghreb Orient des Livres (PDF) is held at Paris’ city council center, the Hotel de Ville. The festival focuses on books and authors from the greater Middle East. Its 2020 edition closed on Sunday (February 9), after three days of programming and book signings with some 150 authors.

This is the third year that iReMMO, an independent think tank focused on the Mediterranean and Middle East, has partnered with Coup de Soleil, an association concerned with North Africa. Coup de Soliel founded the book fair in 1994.

During the iReMMO partnership, the festival has attracted a growing number of visitors as it evolved from what some die-hard attendees describe as a friendly, easygoing, albeit slightly disorganized event, into a more high-powered event. 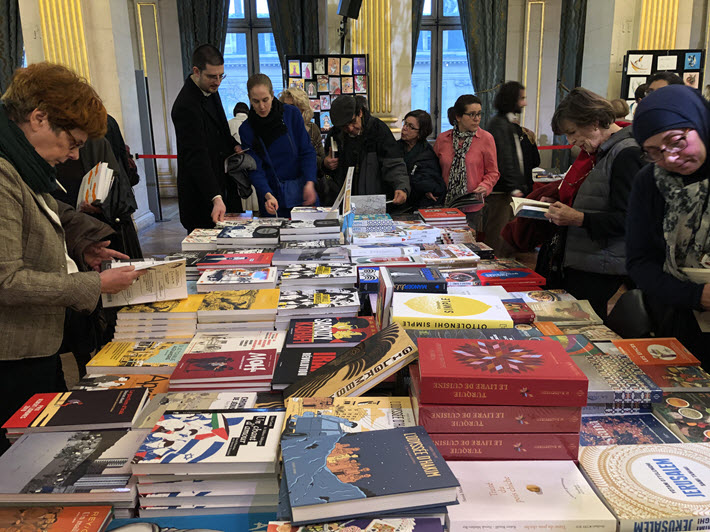 Festival attendees in Paris look over a table of comics at the 2020 Maghreb Orient des Livres in Paris. Image: Olivia Snaije

On Friday (February 7), the first day of this year’s program, a panel geared toward book professionals was organized by three publishers from North Africa—Elisabeth Daldoul of Tunisia’s Elyzad; Kenza Sefrioui of Morocco’s En Toutes Lettres; and Selma Hellal of Algeria’s Editions Barzakh.

“As independent publishers,” Sefrioui said, “we’re very fragile micro-structures that can exist only via collective platforms.”

“Our daily life is so difficult that we’re in an isolated tunnel,” Barzakh’s Hellal said, “and we don’t necessarily think of coming together [because] we’re trying so hard to make what’s invisible visible.”

“In France you only see the tip of the iceberg in terms of production,” Hellal said, “but we’re working all the time. In Algeria, literature is doing well. In Tunisia and Morocco, amazing books in the social sciences are being produced that deserve to be known in France. We exist—you can get in touch with us and we can put you in touch with other publishers. We’re learning to work collectively.”

The Tunisian publisher Karim Ben Smaïl of Ceres has spent 10 years perfecting his online bookshop, which distributes globally by using both the Tunisian postal service and private mail carriers. Ironically, the devaluation of the Tunisian dinar has made the platform economically viable.

Distribution remains one of the biggest headaches for publishers in much of the Arab world, and in particular between North African countries because of complex customs tariffs. But Ben Smaïl seems to have moved forward, at least by the standards of the Tunisian trade. He said he’d like to be able to sell books on his platform from Algeria and Morocco, but until books can cross borders more easily, he’ll only be able to sell ebooks, beginning next year. 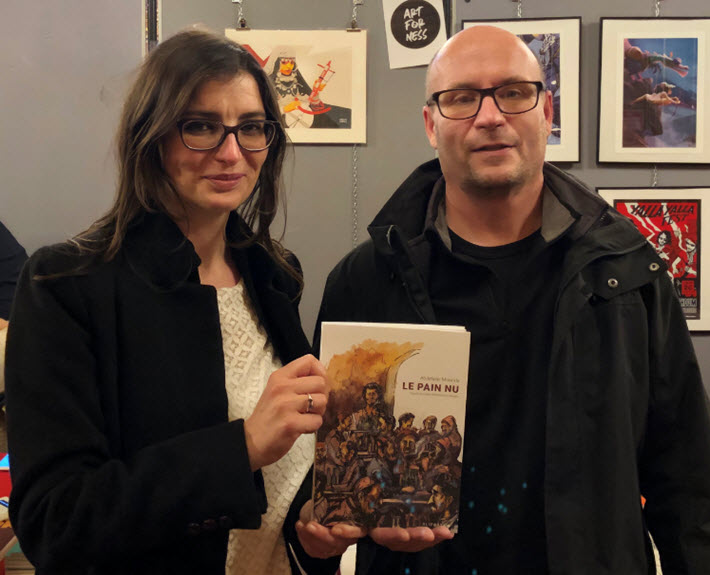 She was joined by En Toutes Lettres’ Sefrioui and comics artist and publisher Jean-François Chanson. They wrote the foreword and afterword respectively. The book recounts Choukri’s childhood steeped poverty, drugs, and sexual abuse. In a rebirth at age 20, he learned to read and write.

One of Morocco’s best-known comics artists, Mouride hadn’t finished the drawings for his adaptation of Le Pain Nu at the time of his death in 2013. Alifbata’s publication shows the work as it was left—parts in color and parts in unfinished black-and-white strips.

The late Mouride was also a political activist who spent more than 10 years in prison. He’d seen Choukri’s book as a parable for Morocco.

“I’ve been waiting for this moment for a long time,” said Haddad, referring to recent events in Lebanon.

Also featured was Moroccan comics artist Zainab Fasiki’s, Hshouma, Corps et Sexualité au Maroc (Hshouma, the Body and Sexuality in Morocco). Fasiki’s visual manual on sexuality and the body written in French has been a hit in both France and Morocco.

On Sunday, events were varied. There was a workshop for children with Egyptian illustrator Walid Taher and his publisher: Mathilde Chèvre’s Marseille house Le Port a Jauni produces books for children in French and Arabic.

There also were sessions on contemporary literature from North Africa, with Moroccan author Abdelkarim Belkassem; Moroccan-American Anissa Bouziane; Tunisian author and translator Hassouna Mosbahi; and the Algerian couple Rabia Djelti and Amin Zaoui—she’s a poet and writer, and he’s an author.

As Maghreb Orient des Livres grows in importance, its challenge will be to keep its welcoming, casual atmosphere as a place in which consumers can join academics and authors; can meet with the founders of comics collectives such as Lab619 (Tunisia) and Toktok magazine (Egypt); and can buy books on Middle East policy, novels, poetry, and comics in French and Arabic from the region’s authors.

More from Publishing Perspectives on the French market is here. and more on publishing and literature in the Arab world is here.