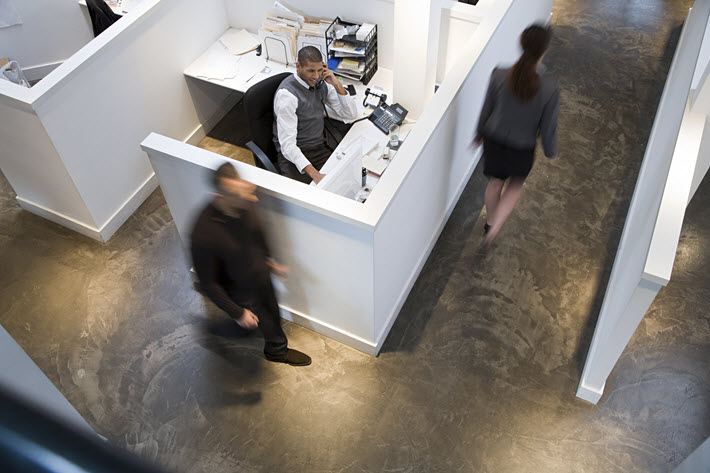 The first four-year update of Lee and Low’s survey on diversity in the United States’ market shows little statistical change from 2015’s results.

When we reported on January 27 about the UK’s latest study of diversity and inclusion in publishing, one of the things that stood out was this year’s upbeat surprise: women hold better than 50 percent of the top roles—both in executive and senior-leadership positions.

In some part, this may be attributable to the study process, itself. The Publishers Association has moved faster and farther than its international peer-associations, creating an extensive plan for approaching the industry’s demographics, range of participation, actual and perceived opportunities, and bearing as a welcoming and concerned business. It has promulgated this material with annual surveys.

In the United States, a new diversity survey effort was revealed just as the UK’s latest study came out. The Stateside report is less happy.

As in 2015, the study has been once again created by the multicultural children’s book publisher, Lee and Low, based in New York.  You may remember our coverage in February 2016 of the company’s 2015 “diversity baseline survey” or DBS. What Lee and Low has committed to, to its credit, is a four-year update of that “baseline survey,” and not least because what was discovered in 2015 made the need evident.

As the Lee and Low material now sums up the top lines of that first effort:

“The results of DBS 1.0 were stark. Seventy-nine percent of respondents identified as white. Seventy-eight percent were women. Eighty-eight percent were straight. Ninety-two percent were non-disabled. At a time when readers of all backgrounds were demanding to see themselves in books, the publishing industry came nowhere near to reflecting the rich diversity of the United States.”

Each of the two surveys takes a year to accomplish, with respondent participation from 153 companies including the Big Five, eight review journals, 47 trade publishers, 35 university presses, 63 literary agencies, the project achieving an overall 36.2-percent response rate. Scrolling down on this page will show you a list of which companies responded.

The writers behind the survey work at Lee and Low now point out that many high-impact societal dynamics have been at play since 2015. The administration of Donald Trump, the development of the #MeToo movement, work in film and television including the singular success at the Oscars on Sunday (February 9) of the Bong Joon Ho’s Parasite, and many more factors, loud or subtle, indicate a potential for change.

And yet, the main outcome of DBS 2.0, the second survey round of the diversity baseline study by Lee and Low, has scant statistically viable change to report.

‘The Field Is Just as White as It Was’

In the States, as represented by the Lee and Low diversity survey, there are many top-line results, even if slim, and much more detail for you in the company’s blog posting at its site on the findings. Graphics are provided under topics of departmental focus in the business.

These are some highlights. Quotes are from the writings of the survey team. 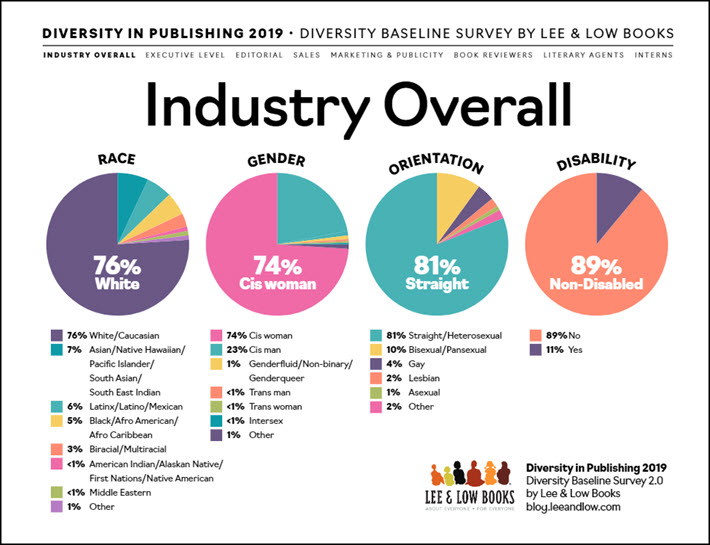 Overall results from Lee and Low diversity survey of US book publishing. Image: Lee and Low

Race: A 3-percent change in respondents identifying as white (from 79 percent in 2015 to 76 percent now), “does not meet the bar for statistically significant change … The field is just as white as it was four years ago.” 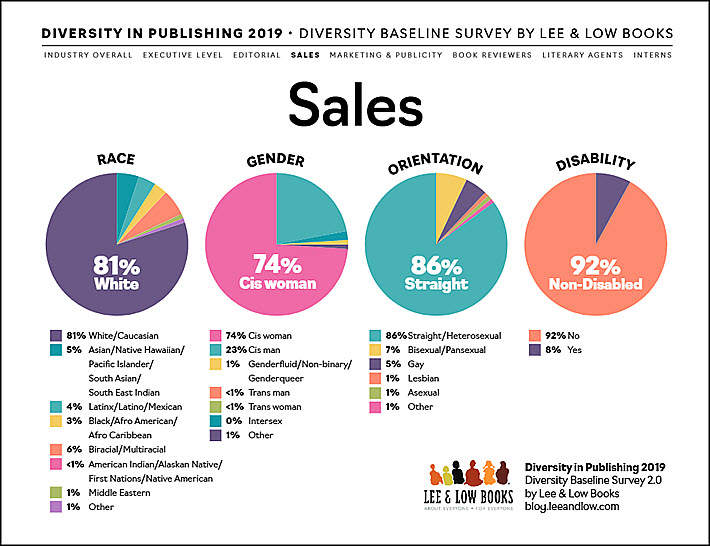 Gender: As with race, a change in respondents identifying as cis women from 78 percent in 2015 to 74 percent in 2019 “does not meet the bar for statistically significant change.”

The discussion on this point includes an issue of importance not always welcome among those who don’t like to discuss the fact that publishing seems to worry little about trying to engage more male readers: “These numbers,” the study’s writers say, “may help explain why some feel that book publishing caters more to female readers.” 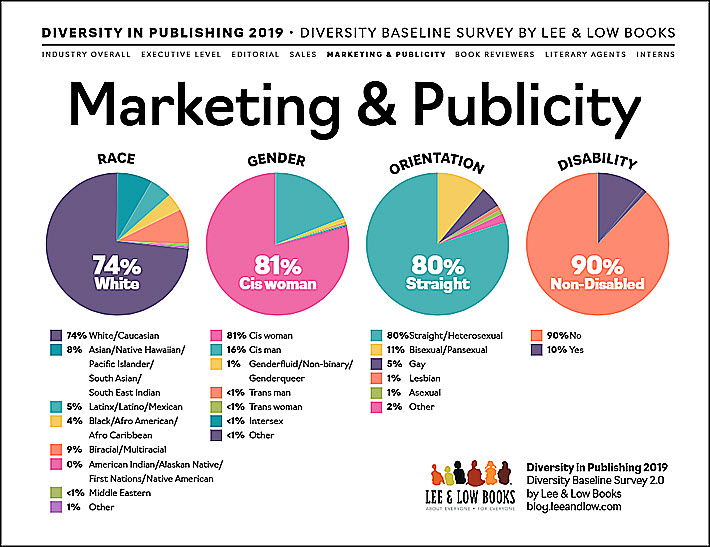 Sexual orientation: “According to the survey, about 81 percent of publishing staff identify as straight or heterosexual. This category saw the most change over the course of the study. In the initial survey, 88 percent of the respondents self-reported as straight. This survey saw a statistically significant negative change in the number of respondents that self-reported straight at 81 percent.

“The change can be largely attributed to the number that identified as bi and pansexual, 10 percent. Not surprisingly, most of these are white women, but that again is most likely attributed to the fact that the field is overwhelmingly white women. There was a slight drop in gay representation to 4 percent, and lesbian to 2 percent, with asexual holding at 1 percent.” 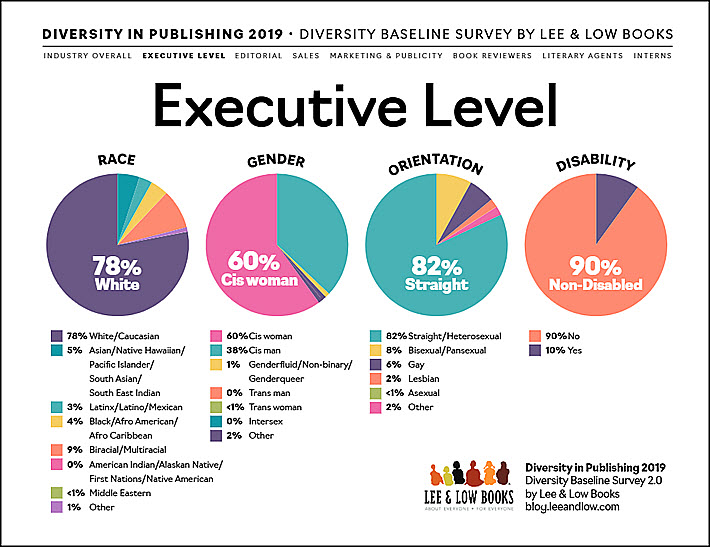 “This is good news, since true change in company culture almost always requires buy-in from the very top.” 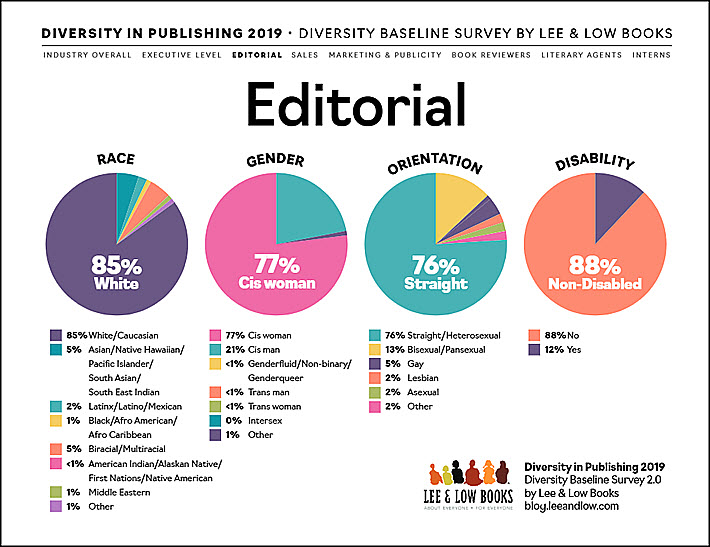 But editorial is even whiter than before: “The percentage of people in editorial who self-identified as white increased from 82 percent to 85 percent. So, even though more diverse books are being published now, it’s fair to assume that the large majority of them are still being acquired and edited by white people.”

Overall … there’s still no change: “For those who wonder how much the inclusion of literary agents and university presses may have skewed the data, our last data slide removes these segments for a true apples-to-apples comparison to DBS 1.0. The largest change is in the sexual orientation category, which dropped from 88 percent straight/heterosexual to 82 percent. No other category changed by more than 4 percent.”

Moving the Needle May Take More Than One Publisher

Despite the recent news coming out London, all of the UK”s diversity issues are hardly resolved. And none will ever be done and dusted.

A helpful line being heard in some world markets these days about diversity overall is, “It’s not going to happen by itself.” That’s correct. It takes conscious effort, not just in publishing but in many businesses. A more accurate reflection of a society’s consumer base and readership needs cannot magically arrive “by itself,” or the issue wouldn’t be an issue, would it?

“Until we start to care about equity, we will not make progress and any gains the industry makes will continue to be not statistically significant.”Lee and Low, Diversity Baseline Survey 2.0

“Until we start to care about equity, we will not make progress and any gains the industry makes will continue to be not statistically significant.”

What’s more, the actual balances–of a heterosexual to LGBTQ presence, of racial range and nuance in a given culture, of soci0-economic background, as well as of gender and leadership–will remain in flux inside publishing just as those balances shift “outside,” on the streets and in the town squares of the world.

It’s the goal of that more accurate reflection that’s most important. Flux is natural.

But perhaps most critically, it involves–according to many we’ve spoken with in the British market–bringing to light the unconscious biases under which almost everyone labors to one degree or another. Any of us can (and maybe do) suffer from one or another set of such biases, however eager we may be to see a business that looks like its consumers and an art that looks like its readership.

And if the UK’s publishers and their association have shown many in the world a way to work at this, not all associations in other markets have rushed to emulate the effort.

Even the London-centric character of that national industry is under pressure, and some publishers enthusiastically are opening offices in some of the UK’s northern cities to begin to explore their relationships to the wider population they need to know better–especially with the hard frost of Brexit still so fresh on the ground.

“Marketing and publicity is the area with the lowest percentage of white employees (74 percent), although it’s less diverse than other departments in the other areas we surveyed.”Lee and Low, Diversity Baseline Survey 2.0

For now, suffice it to say a model is certainly available to any world publishing market’s publishers’ association to consider and adapt, if desired: The UK’s program utilizes exploratory research on the industry, resources, internship guidelines (internship being a frequent entry point for a wider population of staff), a 10-point action plan to which many UK publishers have committed, and then followed by a regime of annual studies (three years so far) to check progress.

And probably the standout point in the UK industry is the association’s leadership. The load is shared by many publishers, and so are the challenges, the efforts, and the results. Although many areas  remain daunting in that market as elsewhere, this association-level programming alone makes the approach worth examining.

In the States, the Lee and Low team points up a couple of positive points, even if they’re more about process than substance: “Only three of the Big Five publishers took part in DBS 1.0,” in 2015, they write, “so it’s a sign of solidarity that all five participated this time. The addition of literary agents and university presses contributed to a bigger pool of participants and gave us a clearer picture of who makes up the industry.”

And the company concedes that diversity and inclusivity, themselves–as drivers of endeavor–have become somewhat crowded: “With so many diverse causes that run parallel to one another,” Lee and Low’s team writers, “it can be hard to keep in mind common goals.”

Nevertheless, that phrase is still true: It won’t happen by itself.

More from Publishing Perspectives on diversity and inclusion is here. More from us on the United States’ market is here and on the UK market is here.