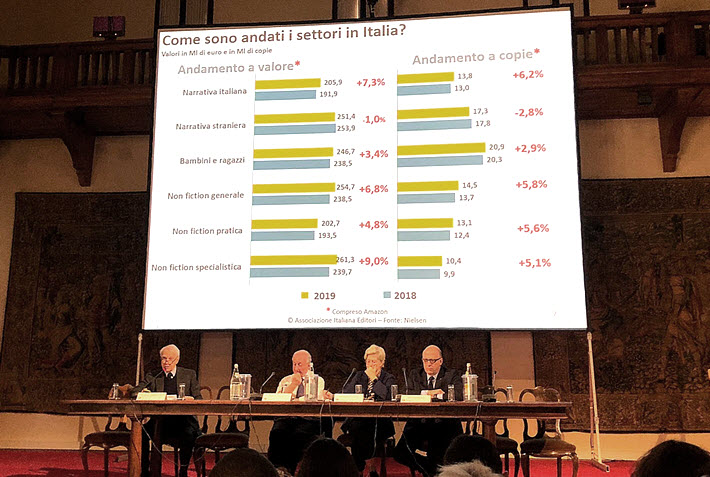 In Venice, the Association of Italian Publishers presents its winter report on 2019 market factors during the closing session of the Umberto and Elisabetta Mauri school for booksellers. Image: AIE, Daniela Poli

In Venice: ‘The Great Challenges’

On Friday (January 31), the AIE convened in Venice at the Fondazione Giorgio Cina on the Isola di San Giorgio Maggiore to some happier news, in the association’s 2019 report on the Italian book business’ performance in 2019.

Per the January figures on piracy, however, it’s estimated that the Italian book business is losing as much as 23 percent of its market to piracy.

‘To Be a Bookseller’

The 2019 figures are a collaboration between the AIE and Nielsen, and the presentation was made in Venice to coincide with the final day of the 37th session of the Umberto and Elisabetta Mauri School for Booksellers.

This year themed on “The Great Challenges,” the closing events included a roundtable with speakers AIE chief Ricardo Franco Levi and James Daunt, CEO of Waterstones and Barnes & Noble; Hachette Livre chair and CEO Arnaud Nourry, speaking on his vision of the industry’s future; and Indian author Amitav Ghosh, whose intervention was titled “Books and Their Future in an Era of Catastrophe.”

The school and its specialized study, Il Seminario della Scuola per Librai Umberto e Elisabetta Mauri, has since 1984 organized 318 sessions totaling 3,597 lecture hours for 6,008 students and 2,043 bookstores. As such, the winter conclusion of its program takes the form of a kind of summit in which the previous year’s market performance can factor into the debate.

“To be a bookseller,” the Mauri school reports, “it’s not enough to be a cultured person or skilled trader or manager. Being a bookseller above all means having the ability to convey curiosity and sensitivity” for publishing’s stories in a world that features “uninterrupted storytelling” elsewhere.

In other words, the competition has arrived in the form of various digital entertainments’ narratives and their glowing appeal to so many. In order to hold books’ and reading’s place in this new maelstrom of attractive storytelling in film, television, video, gaming, and more, bookselling must find ways to make its offer attractive.

Highlights of the 2019 Italian Market Report

In Florence, the Uffizi Gallery uses some of its collection’s cherubic faces to vie with other cultural offerings for Italy’s teen cultural benefit, the 18App bonus. Image: Gallerie degli Uffizi

In a prepared statement, Levi was quoted, saying, “Our good 2019 numbers testify to the work done by publishers in recent years to recover the ground we  lost during the [financial] crisis

“At the same time, the data on the reading, the continuing fragility of the libraries and the retail industry, and the scourge of piracy require significant public intervention in support of the book world.”

Several trend lines can be discerned in the day’s presentation.

Exports of Italian content. Here, the association and Nielsen cite a 4.9-percent increase in print formats, comprising €90.1 million, up 3.4 percent. The association also reports that the market for ebooks was worth €71 million, up 6 percent over 2018’s figures. The AIE points out that the 6-percent rise in ebooks’ performance in Italy outdid a 2-percent rise in France and an increase of 1.4 percent in Germany.

Libraries and online sales growth. Online retail in 2019 accounted for some 26.7 percent of sales in Italy, and that’s up 2.7 percent from 2018. Libraries continued to lose share at 66.3  percent, down 2.8 percent—almost exactly the amount that online sales rose.

A kind of transfer in distribution and content exposure has been underway for years in this regard, apparently. Over the past decade, the Italian market, the report revealed, has seen the online share of sales in books go from 3.8 percent of the market to that 26.7 percent. And this has paralleled a shrinking number of active libraries, down from 3,544 in 2012 to 3,299 in 2017.

In Italy, the development of online commerce, it should be remembered, had a somewhat slower start than in some other markets, because the northern Lombardy region developed its online chops much more quickly than the more southerly parts of the peninsula. We may see deeper online penetration in years to come, as the inevitable gravity of digital development continues to overtake more of the market.

Categories, up and down. One distinguishing factor in the relatively compact and well-reported Italian market is that adult fiction continues to perform strongly. Nevertheless, nonfiction seems to be outpacing fiction, even as it does so in many other world industry markets. What’s more, Italians continue to read less fiction from outside their own country.

A breakdown of category sales includes these points in 2019 data from the AIE:

18App continues its contributions. Publishing Perspectives readers may recall that in 2016, Italy created the so-called “18App” cultural bonus for its citizens turning 18. The bonus provides €500 to be used on “strictly cultural experiences” and has turned out to offer a valuable boost to the books trade.

It’s to be remembered, that even in its heyday, the 18App has been a source of revenue that the arts of Italy had to compete with each other to attract. Evidence of its value is everywhere, as in the page below from the site for Florence’s matchless Galerie degli Uffizi.

A last word on piracy. While our report on January 22 had the salient details of the AIE’s revelations about the cost of piracy to the Italian market from a survey specially commissioned from Ipsos, Friday’s program offered a couple of figures based in bookselling.

With €528 million, or 23 percent of the market lost annually to piracy in Italy, the association says, some €247 million is in lost sales for bookstores, and as many as 3,600 jobs are lost to publishing because so many citizens don’t understand or care that they’re consuming illegal content.

If pirated sales returned to the legitimate market, the AIE calculates that Italy could open 120 new libraries, generating 300 new jobs.

More of Publishing Perspectives’ coverage of the Italian market is here. And more from us on industry statistics is here.