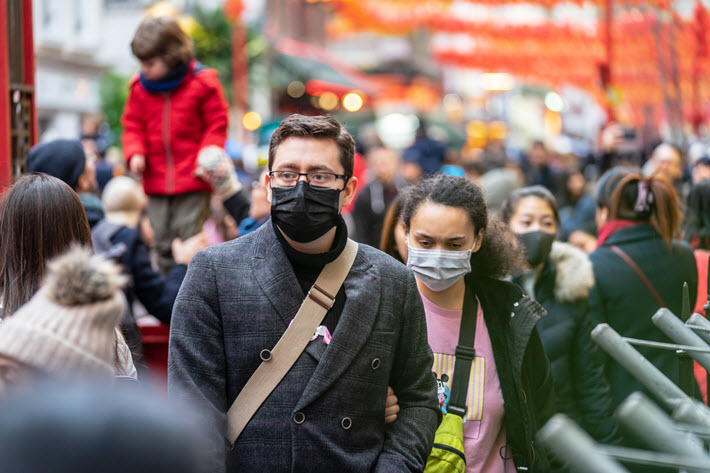 With Ingram’s and Simon & Schuster’s exits from London Book Fair, other publishers are watchful—concerned both for employee safety and for cost in case of potential quarantine amid coronavirus infections.

Face masks spotted in London amid news of the spread of the coronavirus COVID-19. Image – iStockphoto: Power of Flowers

Who Pays the Costs of Employee Quarantine If Required?

Understandably, concerns about the spreading coronavirus outbreak are rising as the week ends and many in the world publishing industry see decision time coming about the 2020 London Book Fair, still scheduled for March 10 to 12.

As Erin Somers reports in today’s Publishers Lunch, Simon & Schuster does appear to be the first Big Five house to make a firm exit. There, Adam Rothberg’s statement says, “After much consideration, and out of concern for the health and safety of our employees, Simon & Schuster has decided it will not be attending the London Book Fair.

“Those staff who were scheduled to attend are looking at alternate means to have meetings with their contacts in the international publishing community, as they already do on a year-’round basis.”

Update: Minutes after our publication of this story, the word arrived that Ingram Content Group also has cancelled going to London Book Fair, and has informed its staff of this today (February 28).

As Publishing Perspectives readers know, the trade show’s administration has said that it hopes and intends to move forward on schedule, despite the loss of Asian industry players, most of whose travel has been restricted by the spread of the virus. The fair’s informational page here has remained unchanged for about a week.

The postponement of the larger Bologna Children’s Book Fair–a trade show that draws 30,000 people normally–has brought the dilemma in to sharper focus for man.

“Of course, our first priority is the health and safety of our employees, so for our US employees, and any other colleagues who are required to travel internationally, we have communicated that if they prefer not to travel to London, the company is fully supportive of that decision.”

Social media reports of PRH “pulling out of the London Book Fair” are incorrect in terms of the company’s official stance, although such positions may evolve in the 11 days left before the fair’s opening day. In general, comments on various social media platforms are likely to carry more hearsay than verified statements.

Macmillan and HarperCollins representatives are responding to news media questions by saying they’re continuing to monitor the situation and expect to make decisions next week.

In the UK market, The Bookseller’s Katherine Cowdrey and Mark Chandler report today, “A number of publishers [have] raised doubts that the fair would proceed, although meeting cancellations have so far only affected visitors from China and South Korea, according to those contacted by The Bookseller.

“Will Francis from Janklow & Nesbit said the Italians were assessing the situation ‘day by day,’ and predicted more disruption to come.”

Now I love #londonbookfair. But after multiple cancellations, Bologna + sporting events etc. postponed, is it really sensible to gather thousands of people from all around in the world in an enclosed space (given that we all get sick at the fair normally anyway)? #lbf20 #COVID19

Cost Concerns as Well as Safety

The concern, of course, for many who travel internationally to the UK each year for Reed Exhibitions’ industry-facing show—which normally draws some 20,000 trade visitors—is not just about the contagion and a risk of illness but also about the cost of a potential lockdown or quarantine scenario. If there were a rapid rise in cases and the authorities moved to contain it, who would pay the costs of keeping publishers’ and literary agencies’ employees in quarantine?

The BBC’s case count has risen to 19 for the UK since Thursday, and first cases in Wales and Northern Ireland are reported.

Presumably, this could require non-UK citizens to stay isolated in British accommodations for two weeks and perhaps for another quarantine period on re-entry to their home countries, as well.

As Gail Hochman, president of the Association of Authors’ Representatives, tells Somers for her report, “People are worried about everything from coming into contact with someone who transmits a virus, to the possibility of being quarantined far from home, even to finding that reentry to the US is prohibited. I’m hearing rumblings of agents thinking seriously about canceling, but I personally have not heard of a big exodus. Most people I talk to are taking this day by day.”

The leading example of this, of course, lies southeast of Milan, where Europe’s most intense outbreak has held more than 50,000 residents in place, the exits and entrances to a dozen towns closed by police. With confirmed cases jumping from 400 to more than 650 late this week, airlines are canceling flights to and from Italy.

This, as in Japan, the country’s prime minister, Shinzo Abe, has requested all schools nationwide be closed for a month. The Tokyo Olympic Games may be postponed to 2021, news media there report. And the island province of Hokkaido has declared a state of emergency.

In California, CBS News San Francisco confirms that some 8,400 who have traveled from China are being monitored by the state for COVID-19, where the first American community-based infection is suspected to have taken place. Those thousands of people are being told to “self-quarantine” themselves for 14 days.

The virus is known to have sickened more than 83,700 people in at least 53 nations. As of this morning, The New York Times counts at least 2,858 deaths worldwide. New infections outside China now are outpacing those on the mainland.

The BBC’s case count has risen to 19 for the UK since Thursday, and first cases in Wales and Northern Ireland are reported.

Sanjay Gupta, CNN’s chief medical correspondent, reports that the World Health Organization in its briefing today has said that every country in the world “should expect cases, learn to treat the symptoms of these cases, make sure these folks are identified and isolated—and make sure their context is identified as well” to determine whether the transmission was human-to-human or the “community spread” that means the virus exists in a given local environment.

And as Publishers Weekly’s Andrew Albanese points out in his weekly conversation with Copyright Clearance Center’s Christopher Kenneally for the Beyond the Book podcast, the virus in China is likely to create problems for publishers in getting four-color children’s books printed and shipped.

Publishing Perspectives will continue to update this story as more developments become available.

Encouraging people from large cities all over the world to fly to London for a goddamn book fair next week is reckless. #londonbookfair #lbf20 @PHE_uk @LondonBookFair @NHSEngland