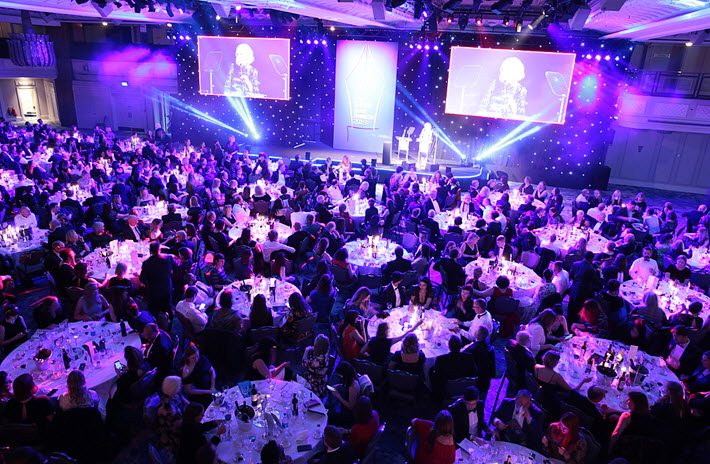 To toast its 30th anniversary, the ‘Nibbies’ ceremony on May 18 will name a ‘best of the best’ winner with the lucky author onstage.

At the 2019 British Book Awards ceremony at London’s Grosvenor House. Image: The Bookseller

Not unlike the Booker Prize for Fiction’s “Golden Man Booker” award chosen from the program’s 50 years of prizes, the British Book Awards today (February 14) are selecting a best-of-30-years trophy for the best of the best in three decades.

, the “Nibbies,” as the British Book Awards are called, in 2017, The Bookseller editor Philip Jones and managing director Nigel Roby announced the acquisition of the program from the estate of Publishing News’ founder, Fred Newman.

The program has been enhanced, particularly in its addition of the consumer-facing Books of the Year awards that provide some bookstore sheen to the long-running trade honors of publishers and retailers.

The Bookseller’s production of the awards each May at Grosvenor House in Park Lane has put an opulent glow on these industry awards, and the team now has selected a longlist for the 30th anniversary of the awards, aiming to announce the overall winner at the 2020 Nibbies on May 18.

The longlist of course includes Harry Potter and the Philosopher’s Stone by JK Rowling (Bloomsbury); The Gruffalo’s Child by Julia Donaldson and Axel Scheffler; Northern Lights by Philip Pullman (Scholastic); and The Da Vinci Code by Dan Brown (Transworld). These are, as organizers note, the titles that go on to become huge backlist bestsellers with legions of imitators.

From the early years of the awards, there are Peter Mayle’s A Year in Provence and Delia Smith’s Christmas (BBC Books). And from more recent rounds, Ireland’s Sally Rooney (Normal People) and the big seller Gail Honeyman (Eleanor Oliphant is Completely Fine).

A shortlist is due in mid-March, and is to include a wildcard entry that didn’t take home a trophy in past years.

‘How Precarious Publishing Is’ 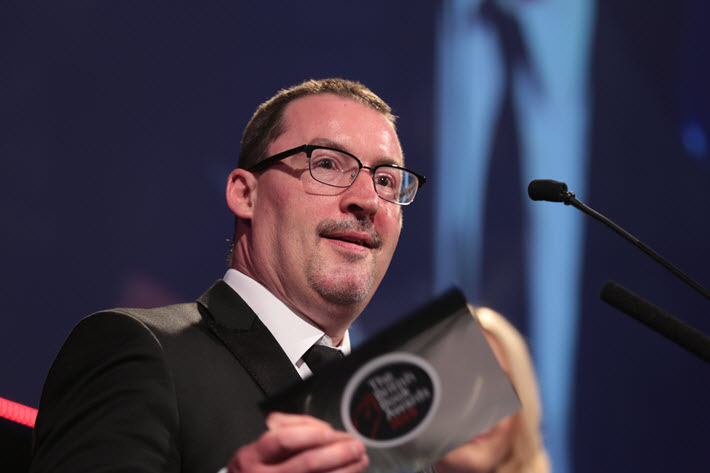 In looking at how the 30-year roster has shaped up, The Bookseller editor Philip Jones writes that the spread of top choices over the years—and which houses produced them—may surprise you.

“This is our way of acknowledging the wider import of these titles, many of which launched careers, defined genres, or simply allowed their publishers to breathe again.”Philip Jones, The Bookseller

“The list shows how precarious publishing is,” Jones writes, putting to rest the idea that a major house can force a success.

“At the publisher level, Transworld is the hit-maker with three of the 30 titles, as befits its remarkable golden period in the Noughties. But it’s hardly dominant.

“For the rest, it’s an even spread, with the magic bestowed by Harry, Bridget, Captain Corelli, Eleanor, and Christian capricious. Although publishing is often accused of crushing homogeneity, in fact lightning rarely strikes the same publisher twice.”

With Jones, jurors for the exercise are The Bookseller’s books editor Alice O’Keeffe; Andrew Holgate, literary editor of The Sunday Times; Cathy Rentzenbrink, author and host of The Bookseller’s podcast; literary agent Elise Dillsworth; and John Mitchinson and Andy Miller, co-hosts of the book podcast Backlisted.

Once the jury has determined the top title, its author will be invited to the May ceremony.

“This is also our way of acknowledging the wider import of these titles,” Jones says, “many of which launched careers, defined genres, or simply allowed their publishers to breathe again.

“It’s also meant as a thank you to those judges who saw the majesty and potential of these titles at the British Book Awards. I’m also delighted to be calling out for a wildcard, a book that ought to have won that we want to bring in from the cold, because, of course, we don’t always get it right.

“Mostly though, I look forward to hearing from readers and publishers as they share their memories of the longlist, and pitch for their favorites.”

Readers are welcome to drop notes about their nostalgia for various past Nibbies by email to 30from30@theBookseller.com and the hashtag for social media on the project is #30from30 . 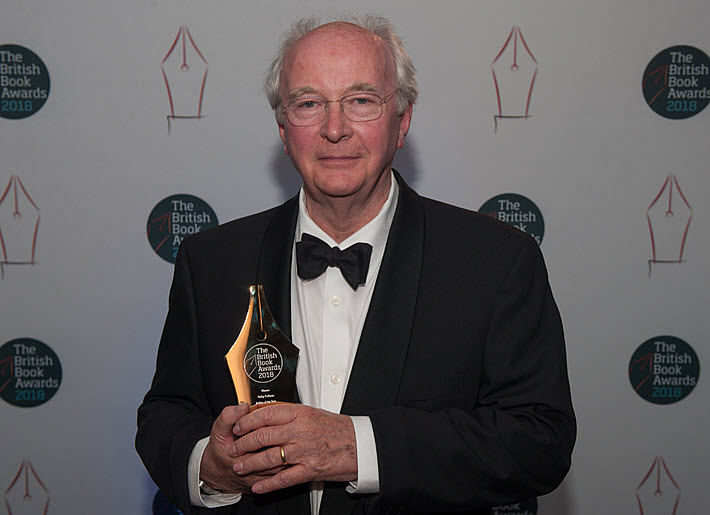 It’s interesting to note that in some years, more than one title was selected, as in last year’s “half a Booker” for both Margaret Atwood and Bernardine Evaristo.

And in some cases, the jurors note, they veered from the “book of the year” winner because “hindsight changes our view.” In 1997, for example, the book of the year Longitude beat the children’s book of the Year winner Northern Lights, but—say the jurors—they both merit inclusion on this longlist.

In addition, the jurors write, “Not every year served up a title that made it onto this longlist. The judges looked to titles that combined quality, with sales, but also longevity—the books that defined their year and the publishing that followed.”

There were two dark years, 2015 and 2016, apparently, when no awards were conferred.

‘Publishing Is a Tough Business’ 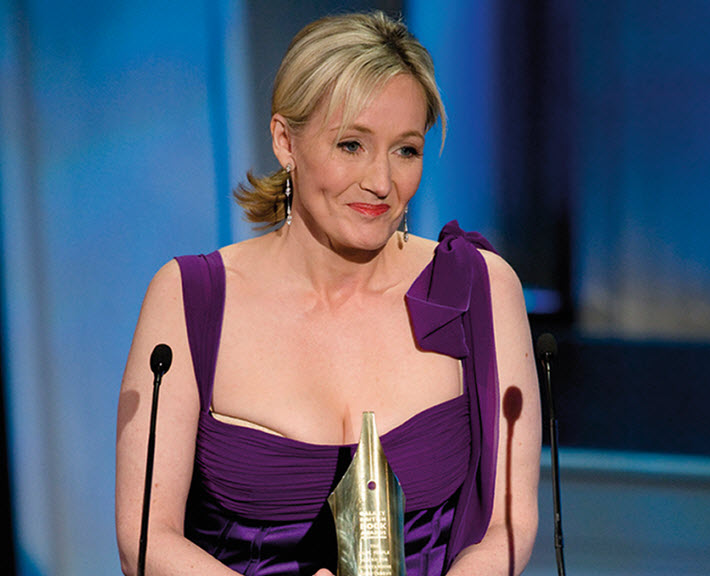 JK Rowling at the British Book Awards. Image: The Bookseller

Jones has an interesting observation on what industry consolidation can do.

“Although publishing is often accused of crushing homogeneity, in fact lightning rarely strikes the same publisher twice.”Philip Jones, The Bookseller

“The publishers that make up Penguin Random House” he writes in today’s edition of The Bookseller on stands in London, contribute 30 percent of the list, even though much of the publishing pre-dates the forming of that group.”

What’s more, he writes, “there are too few independent publishers, and only one publisher operating outside London” on the list.

“You could argue that the British Book Awards have always been about the big publishers, but we’re not alone: of the 25 winners of the Women’s Prize for Fiction (also running a retrospective this year), only six were published by small presses, and none from outside the capital.”

It would be interesting to see which of the “30 from 30” longlisted titles were also successful in other awards programs. It’s not unusual to see a hot title right into the winner’s circle of more than one competition in a given year, another fact that can make many program seem to be “about the big publishers.”

But as Jones writes, much of this is because “Publishing is a tough business, with success scarce. Publishers prefer safety in numbers and the wisdom of their own crowd precisely because bestsellers aren’t simply doled out from on high, but raised up by the many.

“None of this is easy, or a given, and it is why, when we succeed, we celebrate.”

More coverage of the British Book Awards from Publishing Perspectives is here. And more on publishing and book awards overall is here. More from us on the UK market is here.