As the leading edge of French-language Canada’s outreach to the world’s publishing markets, Québec Édition is one busy committee of the Association nationale des éditeurs de livres (ANEL), the Montreal-based National Association of Book Publishers.

Québec Édition functions not only as ANEL’s export organization for French-Canadian literature but also as a globe-trotting advocate for a bustling element of the international francophone book business.

In a telephone conversation with Publishing Perspectives from Belgium, Simon de Jocas points out that he’ll be in Europe at least six times this year, and in a dual capacity. De Jocas is not only the president of Québec Édition but of also Les 400 Coups, a particularly agile publishing house for young readers established in 1995 with a nod to  François Truffaut’s 1959 film, Les Quatre Cents Coups (The 400 Blows).

“Les 400 Coups has distribution in Europe as well as Canada,” de Jocas says, “so I do get to skip over this ocean quite a bit. It requires traveling here to Europe for six presentations to the sales team a year, and I try to combine those with book fairs—which combines well with my work with Québec Édition.”

In the run-up to the Guest of Honor Canada program being prepared for this year’s Frankfurter Buchmesse (October 14 to 18), de Jocas sets the scene for French-Canadian literature with the clarity of a good salesman.

For one thing, it can be tempting to think of all of French-language Canada living and working in the province of Québec, but of course that isn’t true. French-speaking Canadians can be found throughout the nation.

“We account for about 27 percent of the overall Canadian population,” de Jocas says, “and I’m speaking specifically of French-speaking Canadians, not necessarily Québecers. There are French publishers out there, as well,” beyond the borders of Québec, “just as important as we are” in the province.

“But to get a sense of how well we’re doing—and I think our English-Canadian counterparts would agree—when you look at the subsidy programs given out by the federal government, the French side gets the larger part of the deal, 50 percent. And yet we account for 27 percent of the population.

“Including the publishers, the distributors, the bookstores, the libraries, and the school systems, we stick together, through thick and thin.”Simon de Jocas, ANEL, Québec Édition, Les 400 Coups

“So we’re quite busy and quite active and that’s due in part to some conditions that just make things easier for us as francophones across the ocean from France.”

De Jocas is referring primarily to a well-known and vexing controversy for many in English-language Canada’s publishing industry, the presence of the “multi-nationals,” as they’re called, the Canadian installations of major American publishing houses—most of them owned, it might be noted, by non-US corporations. Those major companies are known to buy up Canadian-built publishers, adding to a commercial domination by United States interests.

“We don’t have large Random Houses and Pearsons snapping up publishing houses” in French-language Canada, de Jocas says. “The French publishers aren’t as hungry” in terms of such acquisitions, and this has allowed the publishers of ANEL to shape and manage their market as a parallel to other francophone markets in the world.

Sheer geographical proximity may be a factor here. “If you look at the Belgian situation or the Switzerland situation,” de Jocas says, “they’re relatively the same as what’s happening in English Canada, they’re being gobbled up by France, in terms of publishing.”

But with the ability to chart its own course, de Jocas says, the French-Canadian publishing market has been able to create a highly functional and coherent market structure for itself. “We have a very strong, knitted book chain, right from authorship all the way to the library, I’d say,” he says. “Including the publishers, the distributors, the bookstores, the libraries, and the school systems, we stick together, through thick and thin.

“We don’t always agree with everything,” de Jocas says, “and that’s fine. But on the major elements, we stick together. So we have great authors, who are published in France under Grasset or Actes Sud. But they remain published in French in Québec with their Québec publisher.

“Our bookstores still carry 70-percent French-European books,” he says, simply because the European francophone markets are so large. “Gallimard and Flammarion and all the big groups, Hachette, are all quite present in our market” but without short-circuiting the French-Canadian industry and market.

In part through some protective legislation from the 1980s–referred to as Bill 51–the Québec government has helped create a scenario in which, “No one has ever questioned our right to exist,” de Jocas says. “And by giving us a substantial amount of money—never enough, but a substantial amount—it’s made it possible for us to keep rolling on the European markets.

“This is not only true in books but also in cinema, television, music—we have a very thriving cultural diversity that we like to talk about and promote worldwide.”

To that end—as de Jocas says, “talking about and promoting worldwide” what the Canadian francophone publishing industry contributes and produces—Québec Édition operates in several main formats each year. In coming editions of Publishing Perspectives, we’ll outline in greater detail how some of these programs are developed to provide the impact that ANEL’s member-publishers want to see for their work in the world.

We’ll look quickly today at the three key vehicles used by Québec Édition, and then at one of the cleverest aspects of how the program develops its presentations.

During Canada’s Guest of Honor turn at the Frankfurter Buchmesse in October, the country’s book industry will be represented by several presences, including Québec Édition’s stand and the Livres Canada books stand. Québec Édition will, as it has done annually for many years, maintain its independent presence at the fair to ensure that French-language Canada keeps moving forward on the world stage, even in a special year of celebration.

Indeed, Audrey Perreault, chief of communications with ANEL and Québec Édition, tells Publishing Perspectives that since 2017—when preparations began for Canada’s 2020 Guest of Honor—Québec Édition has had “more and more publishers on our stand.

“In 2019, we had 34 publishers with us,” she says, “and in 2020 it will be 50,” as the Québec Édition program continues to draw more Québec and other French-language Canadian publishing houses to its outreach effort, particularly in Canada’s Guest of Honor year.

Québec Édition will also be welcoming journalists from Germany during the summer, offering mentoring to French-Canadian publishers going to Frankfurt for the first time, organizing networking events in Frankfurt, and collaborating on the Canada 2020 program for Frankfurter Buchmesse, as well.

In addition to Frankfurt, some of Québec Édition’s collective stands this year will be seen at:

In addition, there are Québec Édition presentations for booksellers and librarians on tap this year in locations including Lille, Brussels, Bordeaux, and Toulouse. A quick look at ANEL’s news page highlights various calls for participation, now in play for those who might want to be involved in presentations.

In addition, Québec Édition sets up a bookstore at Le Monte-en-l’air in Paris in June during the Québec Literature Festival.

ANEL and Québec Édition also offer fellowships and other opportunities to learn about French-language Canadian literature, its market and opportunities.

In April, two journalists and 15 booksellers from Germany will be welcomed to Québec City (during the Québec Book Fair) and to Montreal, as well.

And in November, the organization hosts a fellowship program for 12 international publishers and 10 booksellers from Belgium, France, Luxembourg, and Switzerland, during the Salon du Livre in Montreal.

There’s a special event in June for eight children’s and YA publishers from Québec to visit Madrid and Barcelona, getting to know the houses and their staffers during the quieter summer period when long talks and personal relationships can be instigated.

Deploying Booksellers: ‘Telling Them About Our Books’ 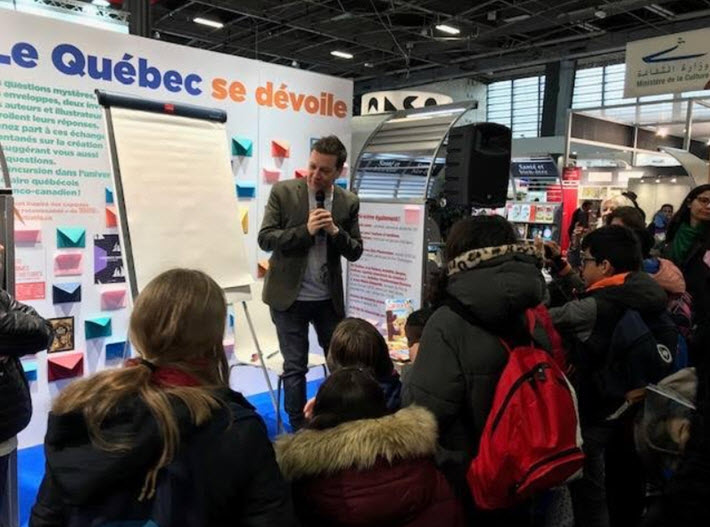 While we’ll have more on each of the programs Québec Édition is mounting in ensuing years, one of the most interesting parts of how de Jocas and his associates arrange collective stands has to do with the use of booksellers.

“One of the things that we like to do,” de Jocas says, “to really gets people excited when they come onto our stands—maybe being a guest from Brussels or Paris or Geneva—is the fact that we actually bring our own booksellers. Depending on the size of the collective stand, we’ll have two or three or even four booksellers who come from Montreal or Québec or elsewhere.

“You know when people start turning up on our collective stands looking for these booksellers, that you’re doing something right.”Simon de Jocas, ANEL, Québec Édition, Les 400 Coups

“These are people who have expressed an interest in being on our collective stands and promoting our books.”

What de Jocas and his team are capitalizing on is the same sales artistry that good booksellers offer to consumers in every town and city in Canada. In this case, those public-facing skills are put into the service of the literature and its publishers in an international setting, the expertise easily translating to another market.

What’s more, the booksellers attached to a stand are instrumental in setting up the display, knowing from experience where and how to place the inventory.

“It’s a bookseller who’s telling them about our books,” de Jocas says. “That’s great. It’s somebody who’s doing that on a daily basis and loves their job. Their mandate is to answer the needs of the customer, and not the publisher. So when the customer comes onto the stand and says, ‘I’m looking for a book for my grandmother, the bookseller knows where to go. Just like in a bookstore, she knows where to go, because she’s the one who set up the stand as well.”

While we’ll have more from Québec Édition and its specific programs, de Jocas is pointing here to one of those ways in which he talks about the publishers of French-language Canada pulling together: by stepping back when it comes time for book fair attendees to discover the literature.

“I usually am on the stand,” he says, “because I chair the committee, of course, and my own books from Les 400 Coups are there. But I can’t talk about the other books. I don’t know them. I’m not a bookseller.

“And this comes back to that whole idea of building bridges between us” at ANEL and Québec Édition “and our booksellers. We could get booksellers from France or Belgium or Geneva and ask them to sit on the stand and take care of our books, sure. But we don’t.

“We pay our booksellers’ flights there, we pay their room and board, we pay them a salary for the time they’re there. They get a chance to travel. And some of them have been there, doing this for a long time.”

That, too, feeds into the sort of long-term track record that Québec Édition has established in its international outreach for French-Canadian literature.

“You know when people start turning up on our stands looking for these booksellers,” says Simon de Jocas, “that you’re doing something right.” 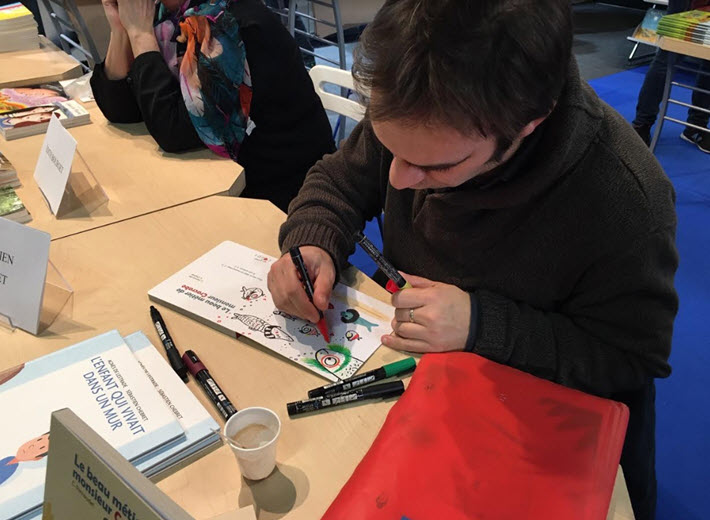 This article is sponsored by Québec Édition. More from Publishing Perspectives on the Canadian market is here, more from us on publishing and the French language is here, and more on Québec is here.