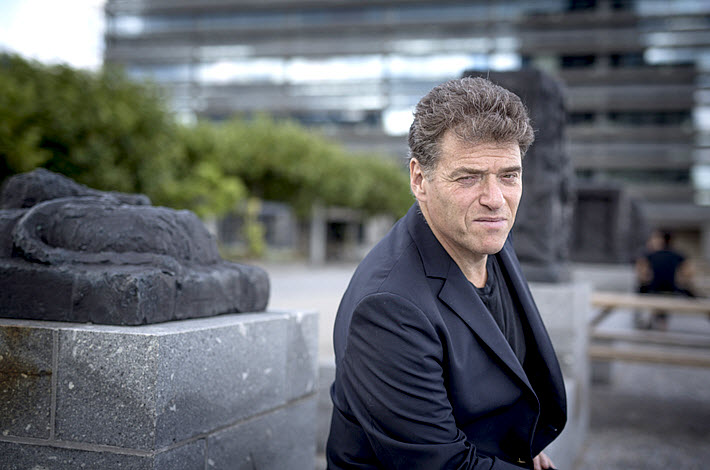 The iconoclastic author, documentary filmmaker, and critic of the digital era’s challenges gives a keynote on cultural integrity at EFM Horizon for Frankfurt’s The Arts+ and DLD.

During the Berlinale–the Berlin International Film Festival (February 20 to March 1)–the European Film Market’s Horizon program will include an address by author, documentary filmmaker, and technology critic Andrew Keen. His keynote is presented by Frankfurter Buchmesse‘s The Arts+ program in cooperation with DLD—the Digital Life Design network.

The event is part of the fair’s Create Your Revolution campaign, which, as you may recall, was opened at last year’s Buchmesse in support of the United Nations’ 17 Sustainable Development Goals and in association with the Börsenverein des Deutschen Buchhandels, Germany’s publishers and booksellers association.

Keen speaks on February 25 at 10 a.m. at the Berliner Freiheit on Potsdamer Platz, in the final day of the European Film Market’s (EFM) five-day Horizon series of events. Frankfurt has worked with the Film Market to create a special €120 price for non-film specialists who’d like to see Keen’s talk and other events in the series. Information and ticketing is available here.

And if your eyes are glazing over at our mention here of so many co-sponsoring partners to the event, that, in fact, is a reflection of how integrated many of the most complex elements of technology, innovation, creativity, and commentary have become.

It’s one of Keen’s biggest points these days.

In an interview from his home in California, he tells Publishing Perspectives that he’s “working aggressively across platforms to bring my messages and my ideas and conversations to a number of different media.

“That’s what I’ve learned over the last few years, you can’t rely on a single medium. It’s unwise.”

To that end, Keen has a book scheduled for release on March 5 from Will Atkinson’s London-based independent house Atlantic Books. Tomorrows versus Yesterdays: Conversations in Defense of the Future is itself a project produced in cooperation with the Munich-based Digital Life Design network. And after Keen’s initial comments on February 25, he’ll be joined by DLD co-chair Steffi Czerny and The Arts+ founder Holger Volland for a conversation on the issues.

Tomorrows versus Yesterdays, the book, is a set of conversations that Keen has had with thought leaders, some of those exchanges based on his Keen on Democracy podcast series. You’ll find his podcasts, the Keen On series, at Literary Hub.

That in turn has given rise to a Bertelsmann Foundation documentary film about the contemporary crisis of liberal democracy. How To Fix Democracy has its debut on Wednesday (February 19) at New York’s Betaworks Studios (6 to 8 p.m. ET) and after the screening, Keen will be in conversation with Mete Coban, CEO of the UK’s My Life My Say youth-empowerment program. Information on seeing the film’s debut is here. 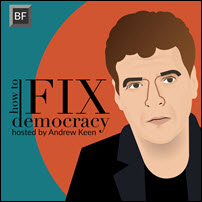 And when he gets to the Berlinale, Keen’s address will be titled, like his forthcoming book, “Tomorrows vs. Yesterdays,” but its subtitle will be adjusted to his topic: “How Creatives Can Fix the Future.”

You see the sort of layered, multi-platform, interlocking array of distribution Keen’s talking about.

The word media still is plural, after all–especially in the case of a leading analyst on technology’s impact in contemporary culture.

The context in which we all first discovered Andrew Keen’s work still lies in the fact that he’s an expert. That was–and is–the point.

But today, he’s talking about how the specificity of an expert lives in the most generalist approach to the media.

The Core Is Holding 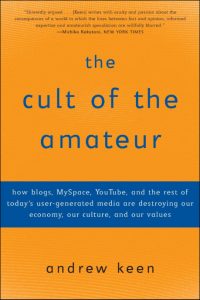 Keen’s publication of The Cult of the Amateur in 2007 established what he says now is still “my calling card.” The core of his message then, as now, was that the vast enabling capacities of the digital dynamic would quickly erode fundamental social values as they fueled the user-generated spree that today chokes media channels with amateurs’ productivity.

“The unfettered nature of user-generated media,” he wrote, “is … misinforming our young people, corroding our tradition of physical civic participation, endangering our individual rights to privacy, and corrupting our sense of personal responsibility and accountability.”

Other titles for which you might know Keen are Digital Vertigo, The Internet Is Not the Answer, and How To Fix the Future, each pressing new alarm buttons as the adoration of technology led to deeper digital penetration of daily life and fewer questions about what protections and principles were being violated along the way.

“Being creative means thinking for yourself, it means not just doing what other people say or what algorithms say.”Andrew Keen

By the time he spoke to The Bookseller’s FutureBook conference in London in 2016, Keen had caught his stride as “the antichrist of Silicon Valley,” a descriptor given him by a French news outlet. You could hear the bravura in what he was telling the UK’s trade book publishing industry at the conference: “My advice to you would be to be un-bookish and show off. The analog truthful response will resonate. What you have is enormously valuable.”

And Keen has remained an advocate for the books business, mentioning in our conversation, “There are parts of the publishing industry that are incredibly innovative,” having reminded London three years ago, “You have a long-lasting medium. You have the book.”

Indeed, Keen at FutureBook was thinking about the “fake news” nightmare of factual manipulation, calling on the publishing world to live up to its responsibility to hold the line on truth: “More and more of what we read on the Internet,” he said, “isn’t true. This is having a huge impact on our culture and politics.”

In Berlin: Creativity and Human Agency

Where Frankfurter Buchmesse’s The Arts+ ethos dovetails most readily with Keen’s conceptualization of the digital dynamic lies in the importance of the creative industries’ mission. 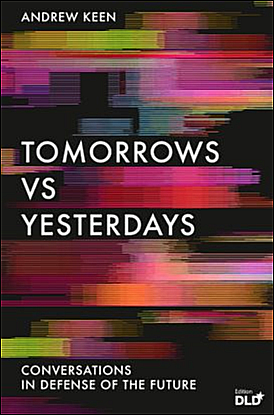 “Creativity,” he says, “and also the other theme I’ve really been focused on in my work–especially in How To Fix The Future (Morgan Entrekin’s Grove Atlantic). That’s the issue of human agency.

“It’s what we can do, in juxtaposition with the algorithm, with Smart Cars, and smart bodies, smartphones, and smart homes.

“This is, I think, the issue of creativity, and it’s central to the 21st century and to the fact that we have to distinguish ourselves from the smart machine. The smart machine can’t be creative, it can only do when it’s told.

“We humans are very good at not doing what we’re told,” Keen says, the “antichrist” nickname showing up in the energy with which he speaks: “Not doing what I’m told is one thing I pride myself on.

“Throughout my life, I’ve always done exactly what I thought is right. It’s got me thrown out of universities, of course, and sent into various kinds of wildernesses at certain times,” particularly by corporate tech powers that would rather not have their intentions and effects questioned.

“You’ve got to be innovative in terms of building platforms, real platforms, crossing boundaries, taking risks, and also figuring out the money side.”Andrew Keen

“But I’ve never been willing to just toe the line. Being creative means thinking for yourself, it means not just doing what other people say or what algorithms say. And I think that’s absolutely right.

“This is the danger,” Keen says, his British dialect reeling up into the urgency he feels on the subject.

“I mean, you’ve obviously got the challenge of technology, of algorithm and all that, which is very dangerous. But I also think that in our time and in our age of political bifurcation and echo chambers, we have a really rigid orthodoxy both on the left and the right. It’s not just the Trump people, who are obviously very guilty of this, but I also think you have orthodoxy on the left which is not encouraging or allowing people to think for themselves.”

Where Keen finds his own salvation–in this multi-tracked delivery of himself and his viewpoints through books, film, podcasting, and stage appearances–mirrors the wide-channeled infusion of human agency and creativity that he will argue in Berlin is our best hope of handling the digitization of our era and our embrace of technology’s force.

And ironically, this means that Keen has become a generalist’s expert.

“You need synergies. If you just sit in a room and write a book, it’s not enough.”Andrew Keen

“This is a great time,” he says “And, in essence, there’s potentially a creative renaissance coming. It’s a winner-take-all cultural economy, but you can’t just be pumping a camera or pounding a keyboard. You’ve got to be innovative in terms of building platforms, real platforms, crossing boundaries, taking risks, and also figuring out the money side, asking, ‘Who’s going to pay for this? Why is it worth my time?'”

“You need synergies,” Keen says. ” If you just sit in a room and write a book, it’s not enough. You can have 200 million followers on YouTube, but you still have to produce cultural content.”

Andrew Keen listens to be sure he’s made his point before signing off. “You have to be a generalist,” he says it again.